Ides Of May Wipeout

I expected more downside yesterday near the close of the session but frankly this is a bit more than I had in mind. As usual the MSM is doing their very worst in trying to pin today’s equities wipeout to anything resembling a bearish soundbite (and having a very tough time doing so) – after all in their little bubble universe it’s the news that drives the tape, isn’t it? 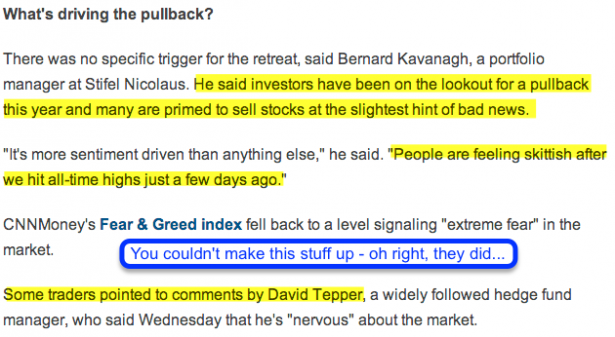 Well, where were all those ‘bears’ yesterday or Tuesday when the SPX touched 1900 for the very first time? Riiiight. I guarantee you that the vast majority of bears completely missed the boat on this sell off – of course if you visit their usual watering holes today everyone is busy high-fiving as if they’re been short since the S&P was tickling the very top. 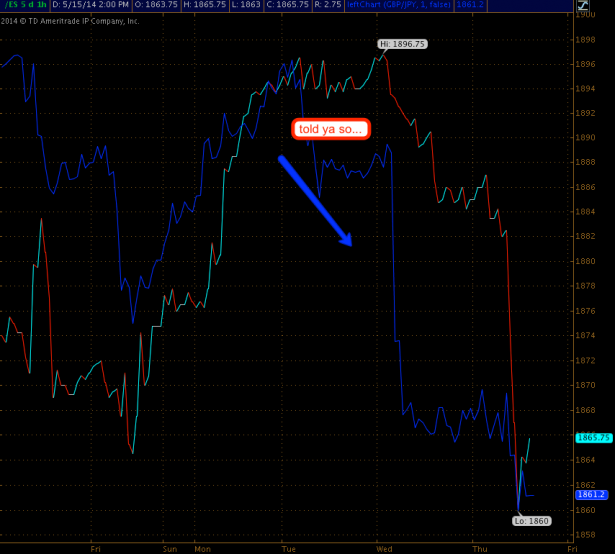 Sorry, I couldn’t resist but that’s how I roll. And I concede that it was a subtle hint – not enough to bulk up on shorts yesterday. But good enough to keep out of long positions, so I consider myself lucky. This is yet another point for the GBP/JPY to ES futures correlation – it has kept us out of trouble on several occasions now. 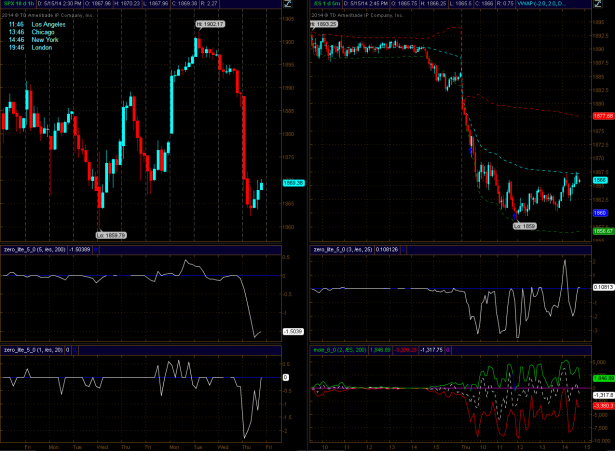 With a bit over an hour to go we finally managed to kiss VWAP on the Zero Lite. That’s a meager bounce after such a freefall and the bulls have to do a lot better than that. Perhaps this is the beginning of the end. 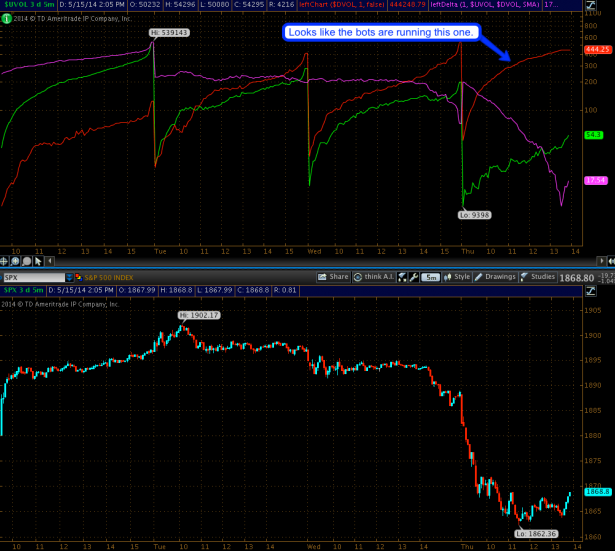 Clearly the bots are running the game again today. Very nice smooth sell curve and only spasmodic buying. Of course this has implications – meaning we could be seeing a quick reversal here soon. I hate to say it but once again a very lousy spot to take long entries. 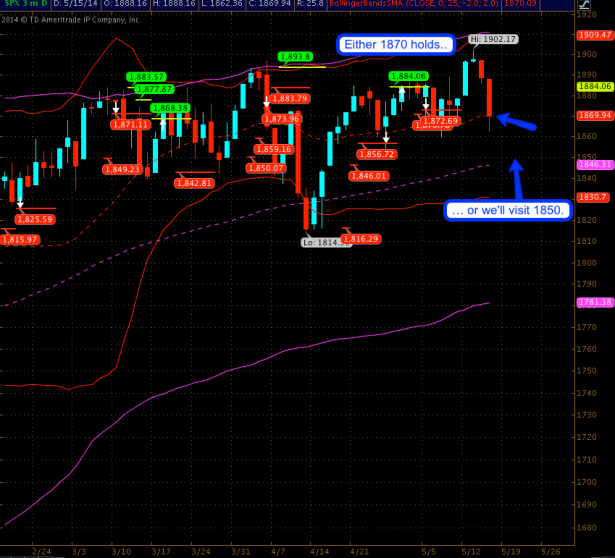 You may remember the message I offered to the bulls the other day – 1880 needs to hold or the bears are going to rape you. Well, that message doesn’t seem to have been received as we’ve been scraping 1860 today (gasp). A very concerted effort to push the tape above 1870 is now required to pull the cart back out of the mud. This probably has to happen today as a close below the 25-day would be very bearish – no prior close below has not drawn us back to or below the 100-day SMA. And it may get worse from there. 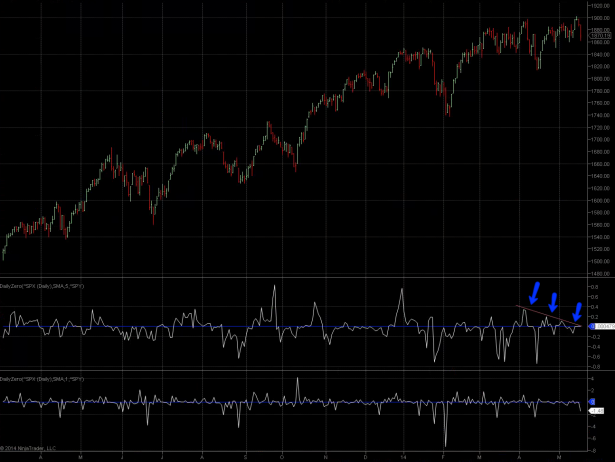 And now that we’ve dropped 30 handles it’s probably fair if I share the latest snapshot of the daily Zero which has been painting a pretty distinct divergence for weeks now. Of course one never knows when these things resolve. But it is something to keep in mind IF we see a dead cat bounce here. I think the bulls are starting to be in big trouble here and Tuesday could have presented an exhaustion spike before a medium term trend change. Let’s not jump to conclusions – but keep collecting evidence. 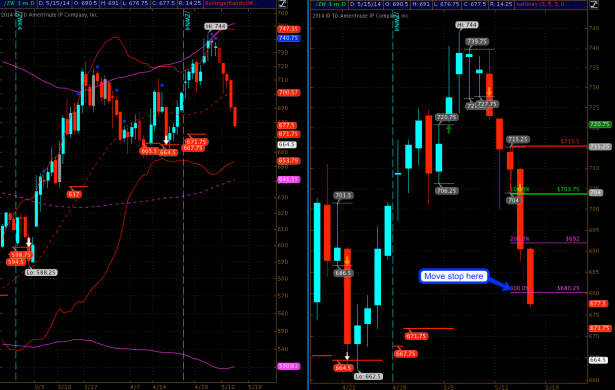 Updates on our recent victims – as hoped wheat has been running like a champ and we are now putting our stop at the 2R mark. This is the second consecutive campaign in the past two weeks and it’s been very profitable. As I said before and I say it again – equities are mostly a distraction from the good setups that are out there every single day. 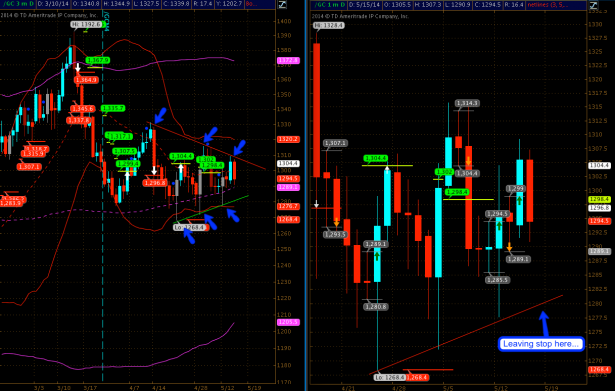 Gold has been less cooperative and failed at the ‘make or break point’ I highlighted yesterday. We now find ourselves back below the IP trigger at 1299 and someone you all know wishes he would have closed this one out at 1R yesterday (hum hum). However you may recall that I modified the stop quite a bit down to 1280 and with reason. This triangle formation will be instrumental in determining the direction for the next quarter. It is possible that this resolves to the downside but at this point it’s a bit early to switch sides. 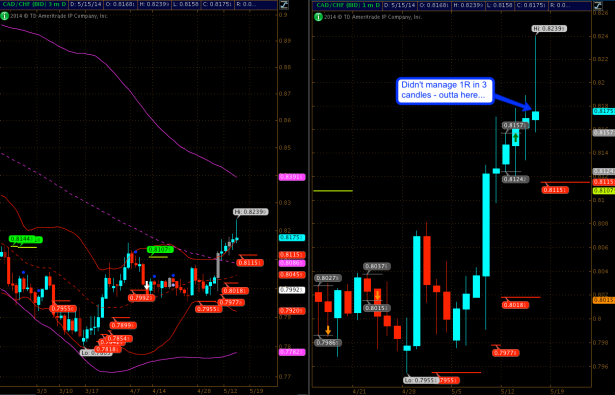 CAD/CHF didn’t manage to bank 1R in three sessions and we are out of here with a measly 0.5R profit. Meh – better than a kick in the shin but given that we were at 2R this morning it’s a bit of a pain. But there goes again the old lesson regarding paper profits 😉 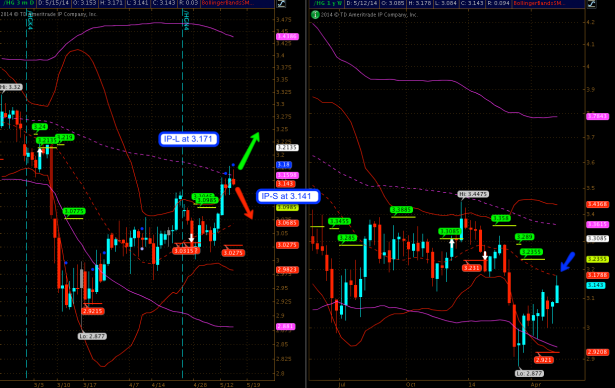 Copper is looking pretty good today – as it did yesterday. Now we’ve got an IP candle (another one) and although I’m already long I may add a contract on a breach above the 100-day SMA. Will be definitely closing out and be short on a breach below today’s lows. Note the weekly context as well which as us right at the 25-week SMA. Good stuff and this is a solid setup.

Not much else I would want to touch today – let’s give it a boring sideways session tomorrow to let things settle down a bit first. See you guys on the other side.