If At First You Don’t Succeed 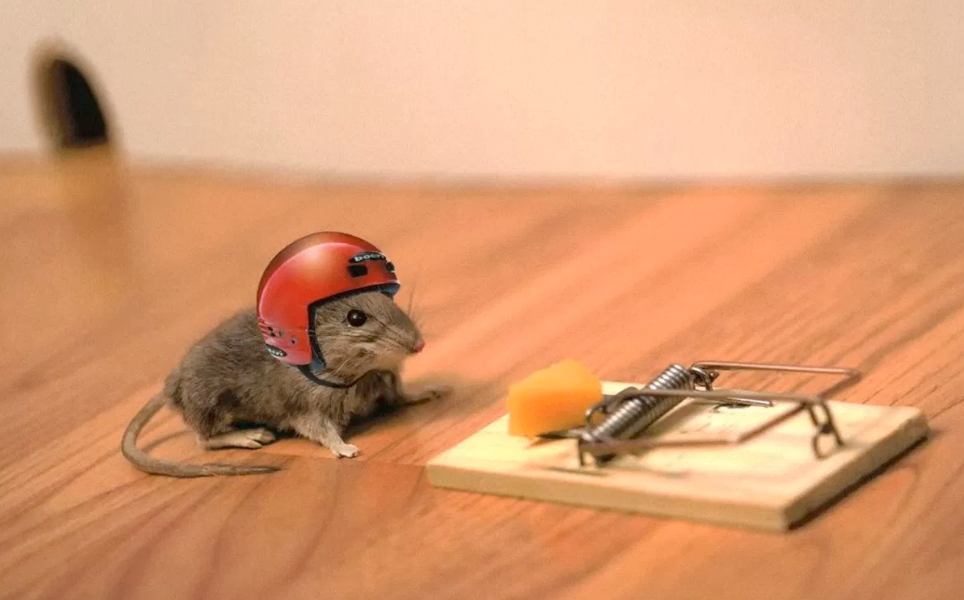 Try try again! But obviously one must draw a firm line between becoming obsessive in chasing the tiger’s tail and being able to pull the trigger when the odds appear to be in our favor. Which is only possible if we have defined a clear set of rules ahead of time which clearly define what is considered an entry opportunity and what is not. So let’s see what we’re dealing with today: 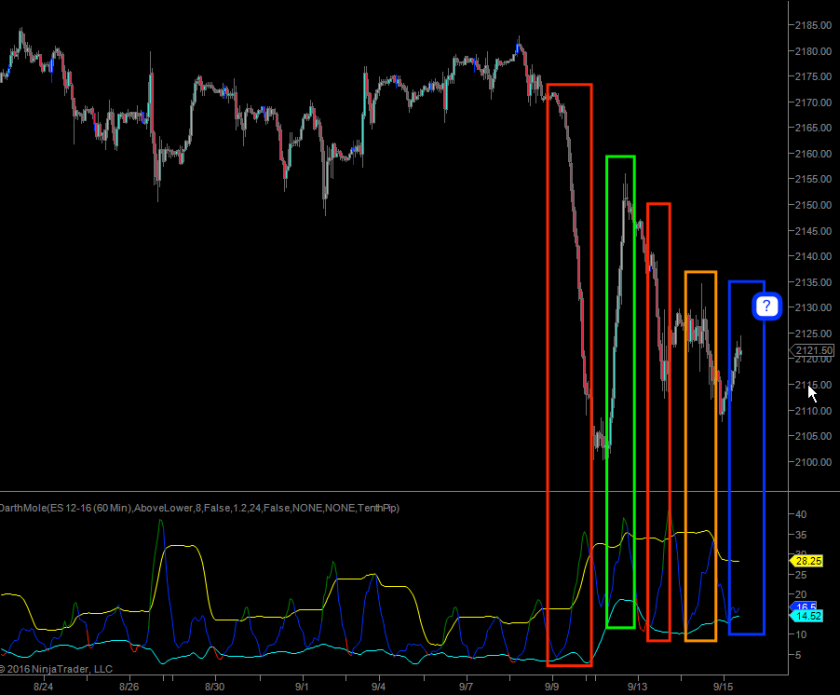 Actually this is a rather simple scenario although I concede that it may look a bit frightening at first glance. But first impressions are often designed to deceive, and that is a big part of the game we play here on a daily basis. 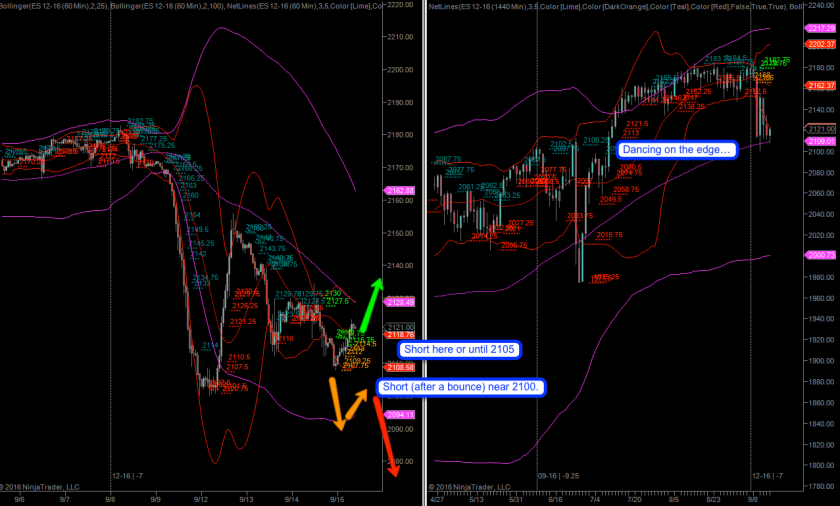 Although sellers seem to be suddenly in charge it’s not yet clear that they are going to win this battle. The current whipsaw leaves us with several plausible scenarios, many of which are however difficult in terms of taking entries. The two I consider most advantageous are indicated on the hourly panel above: 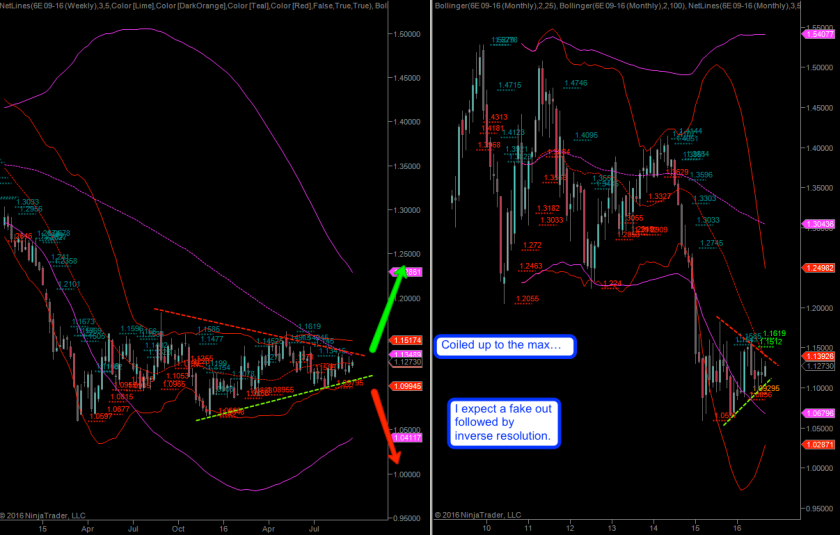 As an expat living in Europe you bet that I follow the EUR on a daily basis. Thus far I’ve produced a pretty solid track record on timing my trips to the ATM. Of course from a trading perspective we’ve enjoyed a few good runs but it has become more difficult in recent weeks as the magnitude of the swings are diminishing.

Shown above are the weekly and monthly panels and the unfolding sideways pennant formation is becoming more and more pronounced. The odds would traditionally support continuation lower, however let’s keep in mind that we’re dealing with a highly manipulated currency here, so technical precedence has only limited value.

What we can rely on however are the types of traps that are usually employed to draw in a maximum number of suckers ahead of a big move. And in this case I would expect the final resolution of this stalemate to be preceded by one last fake out move. And in the context of such an assumption whatever breach we see first would be considered most likely the wrong one. I can’t guarantee you that this is exactly what will happen but I can promise you that I personally won’t take any entries here unless I see a breach followed by a recover back inside the triangle.

By the way the CME currency futures roll over tonight, so make sure you do the same if you’re exposed. 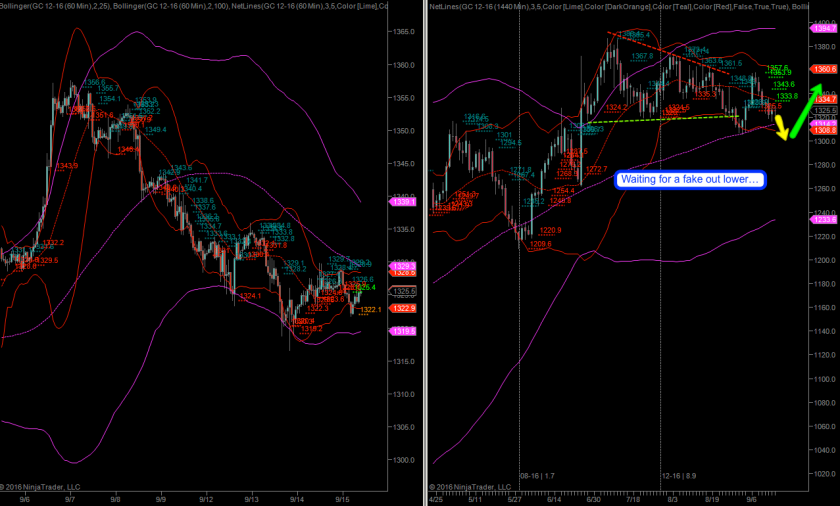 Gold is another symbol on my waiting list right now. Given by what I’m seeing on the daily panel the bulls seem to have the advantage but only to a point. A drop below 1300 would most likely send a lot of longs heading to the hills, which is why this is exactly the type of scenario that is most lucrative from an entry perspective. Here a drop lower followed by short term buying interest (i.e. a spike low or an hourly NLBL breached) is where I would be interested in taking out a small long position with a respectable ISL below 1290ish.

Of course we do have actual setups today, please join me in the lair: