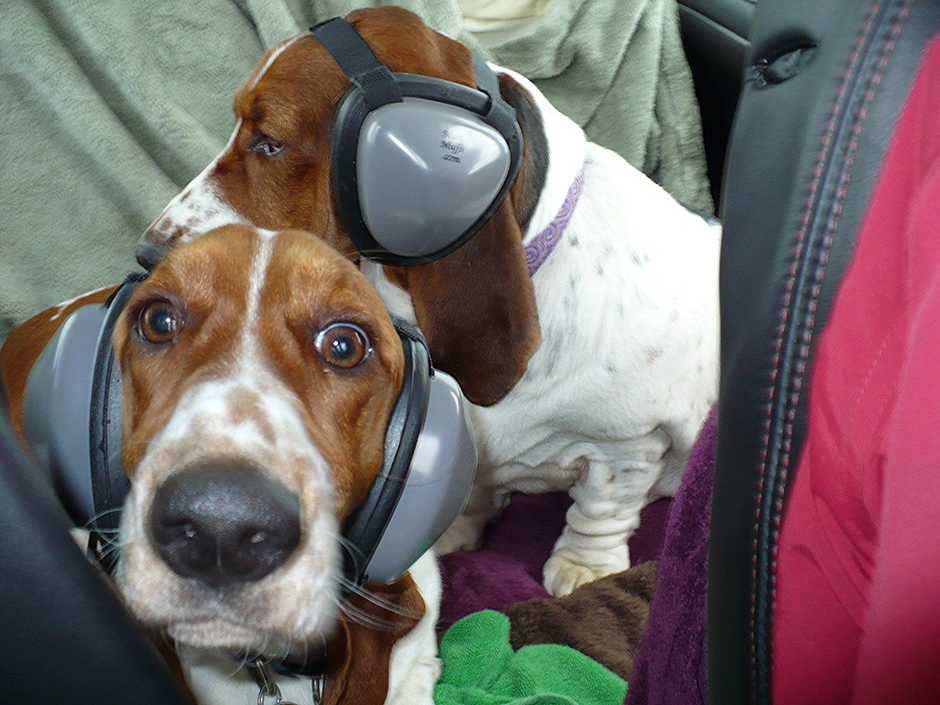 Since you guys are way too chatty this holiday season I have no choice but to post a comment cleaner. Alright, I’m kidding of course and quite frankly not commenting on the recent price action became increasingly difficult. So here’s my perspective on the recent week and where we are heading next.

First of all if you DID NOT ignore all the bearish news this week then you may already be paying dearly right now, effectively having given up much of your paper profits. During volatile periods like these it is crucial to remember Evil Speculator tenet #1, which is that the crowd is always wrong when it matters the most.

After all, by definition whatever everyone already KNOWS is not worth knowing, right? I actually went clickbait slumming earlier the week and ran into a ZeroHedge post ridiculing Trump who had come out and recommended everyone to BTFD. Which, albeit being news of course, should have given everyone great pause as he literally bet his entire presidency (and chances of re-election in 2020) onto this one call. Ballsy!

Just imagine what will happen if Trump is wrong and we crash from here (which may just happen – see below). It most likely would spell the death knell for his entire administration and render him a lame duck president for the remainder of his term. So you can bet that his announcement was preceded by quite a few phone calls to the right people.

What really stunned me most of all was how politically charged the responses were, and in particular that nobody seemed to remember what had transpired in 2009 when President Barack Obama basically made the same call. The rest of course is history. 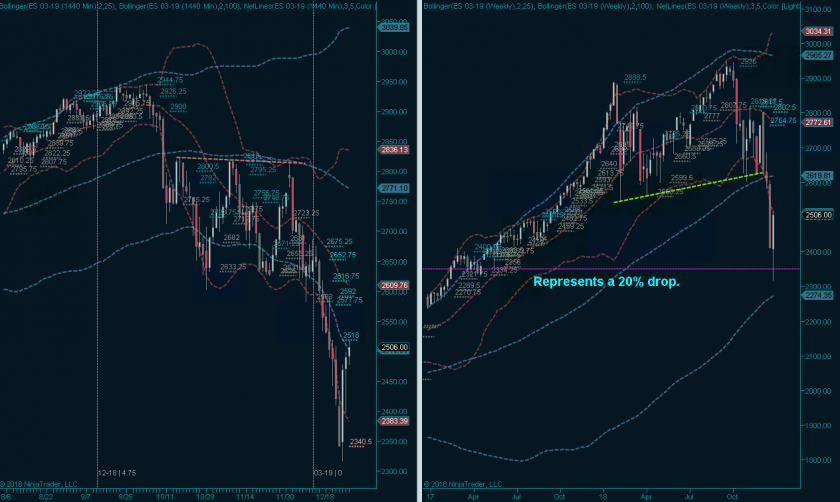 Of course as always buying this dip was emotionally difficult as fear had gripped the market and continues to do so even now. This most certainly is one of the integral and most challenging aspects of trading a bear market: The most profitable actions are invariably the most difficult to take as they usually go against all our most innate human instincts.

Not helping matters of course was the impending government shutdown and that Trump was openly musing about firing Jerome ‘Kryptonite’ Powell, all of which was pure manna from heaven for the finely tuned MSM clickbait churning machine.

Completing this almost perfect storm was the timing, which could not have been worse with many market participants on holiday during Christmas Eve, yours truly included. The stage had been set. 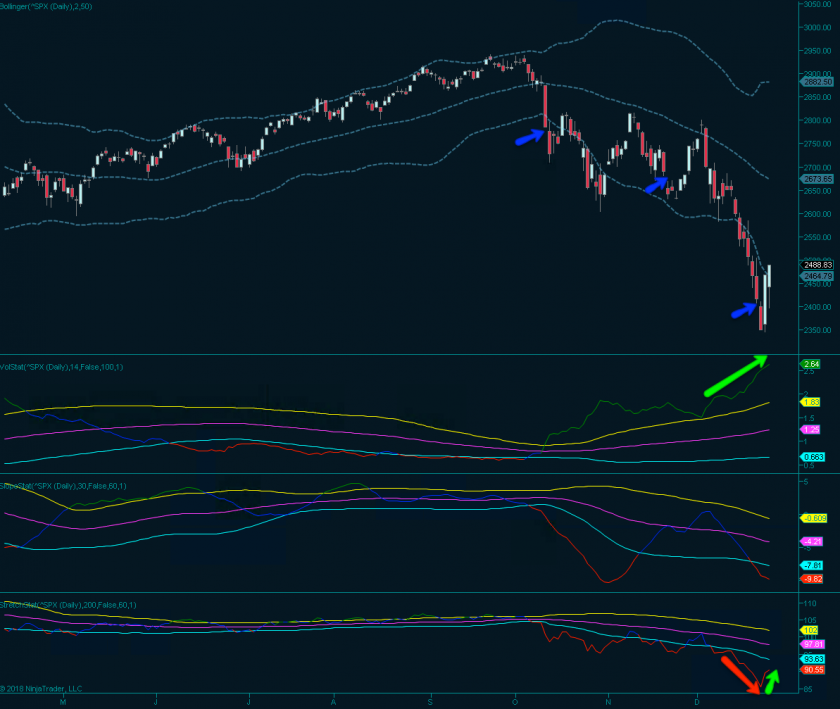 Utter political chaos combined with meager EOY participation during a high volatility market correction, if that isn’t a recipe for disaster then I frankly don’t know what is.

And the result? A 1000 point snap back on the Dow that basically ripped the bears’ faces off. The emotional impact? Well, let me put it this way: If you were holding short term puts through Wednesday morning, and that is what most retail bears did, then I sincerely hope you have generous amounts of vaseline on hand.

Now enough with the gloating, let’s talk technicals. First up the writing had already been on the wall as the 25th opened with an exhaustion gap lower, which quote often is the hallmark of an impending spike low and a bounce higher (see blue arrows on the daily SPX above).

So where do we go next? Note that realized volatility remains expansive and that’s okay for a little while but if it continues then it spells bad news for the bulls. What we would want to see over the next week is a retest lower followed by RV normalization, which will make catching a SL easier for all of us.

The odds of this happening right now however are slim and once this rip slows down I will be on death watch with short positions at hand. Only a push > SPX 2600 throws the bulls a lifeline and at least as for now we are far away from reaching that threshold.

And if nothing else, just look at the current formation on a long term panel. Does it really look like as if we are casually rolling back into a bull market? The current bounce most likely represents nothing but a HV bounce during a bear market cycle. Nothing unusual about that and we talked about this possibility several times over the course of this month.

If we are lucky this bounce transitions us into the sideways churn from hell that will occupy most of the first quarter of 2014. Come to think of it, I’m not sure that this would be my preferred scenario. 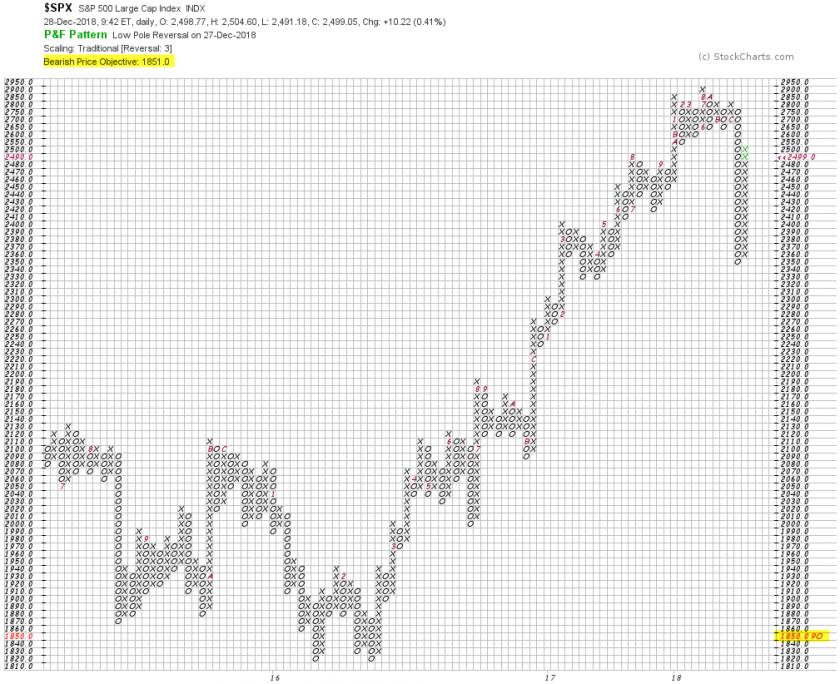 And then there is this. What are you looking at above is my long term P&F on the SPX and there are good as well as bad news. The good news is a low pole reversal which offers the bulls the opportunity to avoid complete disaster over the next month of so.

The bad news is the bearish price objective which currently stands at (drum rolls) … SPX 1851. That’s a possibility and not a necessity but if the SPX drops through 2350 again then it will most likely become a high probability.

If you are long enjoy the current ride but remain nimble and don’t get too greedy – I suggest you take partial profits after 3R and tighten your trail to -1R MFE, reducing that to -0.5 MFE after 4R . If you missed it then I would caution against chasing the tape higher.

If you are still short then you are in a world of hurt right now and what you do from here depends on your exposure and your long term perspective. Obviously the big picture still suggests we head lower eventually but you will have to be prepared for a lot of pain, which will be psychologically challenging.

My default recommendation to any short trader, which may sound moot right now, is that you should never even let it come to that. The proper way to trade a HV bear market is to continuously take profits on the way down and to increasingly tighten your trail after ~4R of profits.

That may all sound disappointing, but very few traders are able to nail 10R+ lottery tickets, let alone double their accounts in a matter of a week or two. Abandon these illusions once and for all if you want to assure that your account survives even the most modest bear market.