I have to admit that I don’t feel comfortable about the current tape in equities. Something just doesn’t ‘smell right’, which in itself is an alarming sentiment as I should fade all emotions and just stick with the facts, in other words my charts and the tape. 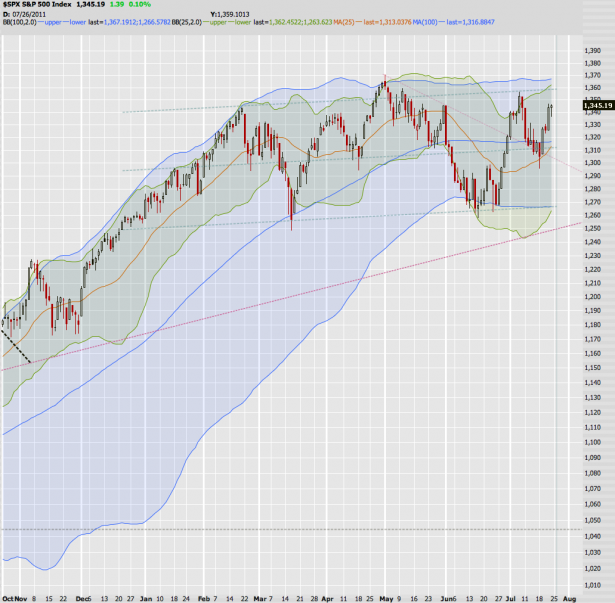 If was still counting waves then I would expect the current push higher to either stop right here and now, or to continue higher with much velocity, probably starting Monday. In a way this indecision does spell opportunity.

Let me explain the context here – as previously reported we have been landlocked in a 1270 – 1370 channel since early January and whatever side wins this struggle is going to bank quite some mighty coin. We are six handles away on the SPX and suddenly momentum completely disappeared which is either a setup for a bear trap or we are about to roll over and find ourselves a lot lower. 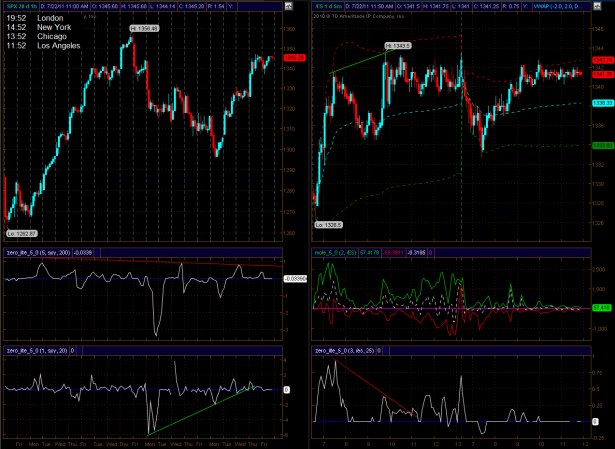 Here’s a snapshot of the current Zero. On the left side (i.e. the hourly Zero) you can see the bullish divergence that warned us about the impending rip higher. But it’s also apparent that bullish momentum isn’t really that impressive to begin with – not once did we push above the 2.0 mark on the hourly.

On the right panel we have the Zero Lite that plots on the 5-min chart. Yesterday’s range was already unimpressive, never exceeding the 1.0 mark, which is the threshold for what I would consider a bullish signal. Today we are flatlining completely and the bots seem to be playing ping-pong. Now, that doesn’t necessarily mean that we’re dropping from here – it’s an ambiguous sign that suggests caution and that the tape is now in a holding pattern.

But that does not mean that we don’t have an opportunity here – assuming that we are at an inflection point. If we push toward 1370 it’s pretty much game over for the bears – if we drop yet again from here and breach 1310 you’ll see the longs run like cockroaches. In between we are somewhat in no-man’s land – which is purgatory of retail traders in which market makers make a killing. You can play this both ways and I would use yesterday’s daily candle as my yard stick – a breach of SPX 1347 should lead us higher – a breach below SPX 1325.65 most likely signals a continuation to 1300 and possibly much lower.

Let me show you the net-lines on the spoos – which provide us with a bit more fine tuned picture. Also a few commodity charts and an update on bonds:
[amprotect=nonmember] Charts and commentary below for anyone donning a secret decoder ring. If you are interested in becoming a Gold member then don’t waste time and sign up here. And if you are a Zero subscriber it includes access to all Gold posts, so you actually get double the bang for your buck.
[/amprotect] [amprotect=1,13,9,12,5] 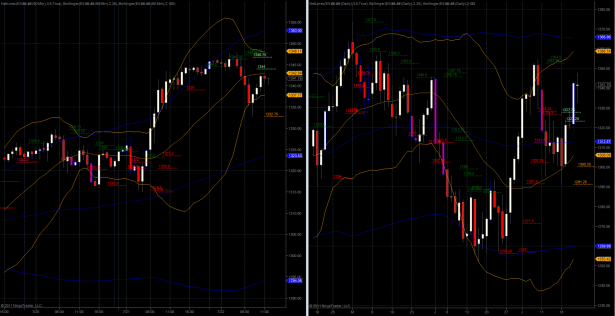 The hourly panel (on the left) is sitting below the 1344 NLBL (roughly 1347 on the SPX), yet again proving that breaching this level is important. We also have a NLSL at 1332.75, which is today’s low. So if you are courageous then you may want to start going short on a close below that and pyramid positions on the way down (use Bernie’s Pyramid Calc available in the menu bar). 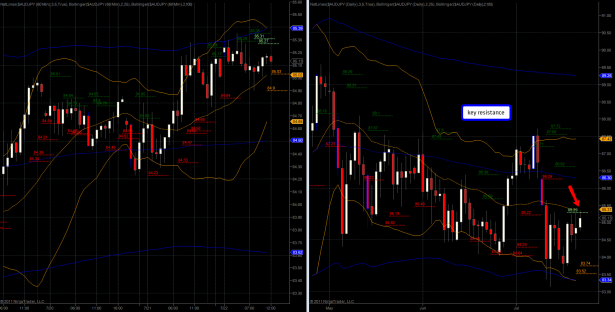 Another reason I am not too hot about the long side right now is the AUD/JPY which is sitting below some resistance here – if it can breach that 25-day MA then I expect it to help push equities higher as well. So, over the weekend keep your eyes on this currency pair (and the spoos). If you can only trade stocks/ETFs and FX then this gives you an opportunity to hedge your equity positions over on the FX side starting Sunday afternoon. This may not be apparent to some of you – but it’s one way to prevent having to watch your equities position move against you overnight without you being able to do anything about it. Some folks do not feel comfortable trading the futures, so the AUD/JPY is a possible option. It doesn’t always move in unison with the spoos – no – but it’s at least something to lessen the pain should you see big moves on Sunday night. 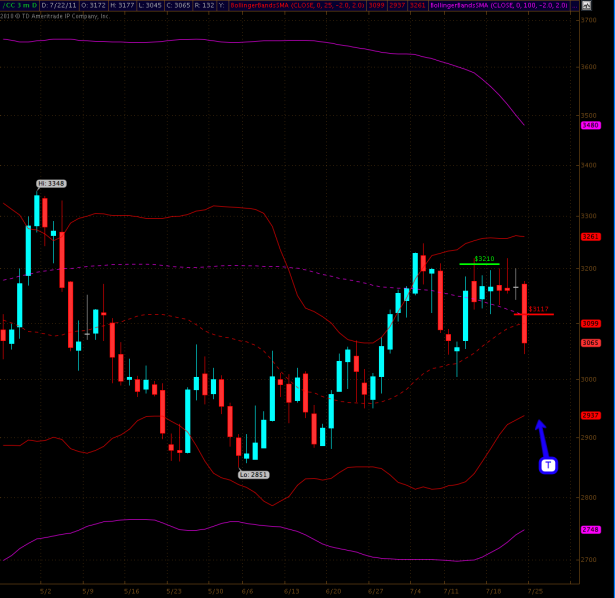 Cocoa was dropped into sour milk today – most likely we’ll see a retest of that NLSL, so don’t chase it here. My current target is 2940. 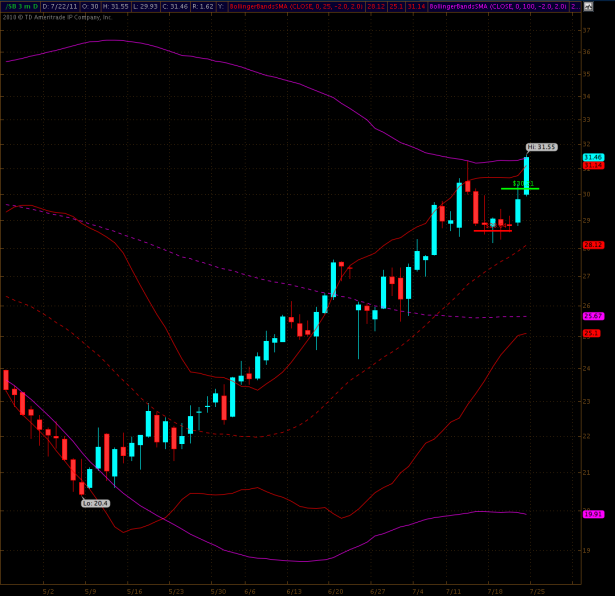 Sugar is at target right after breaching that NLBL – if you happen to catch this one earlier this morning then you should revert back into cash now. 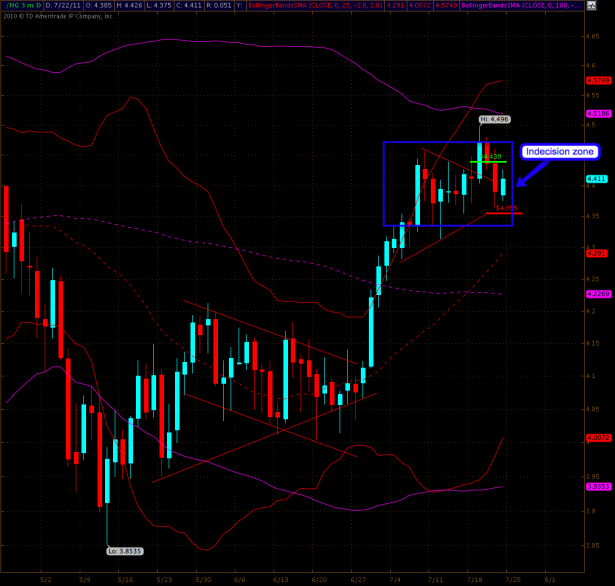 Copper is trying to figure out what to do with itself. Based on yesterday’s drop I issued an evil lair alert late in the session. We recovered somewhat today but we remain stuck between 4.439 and 4.355. 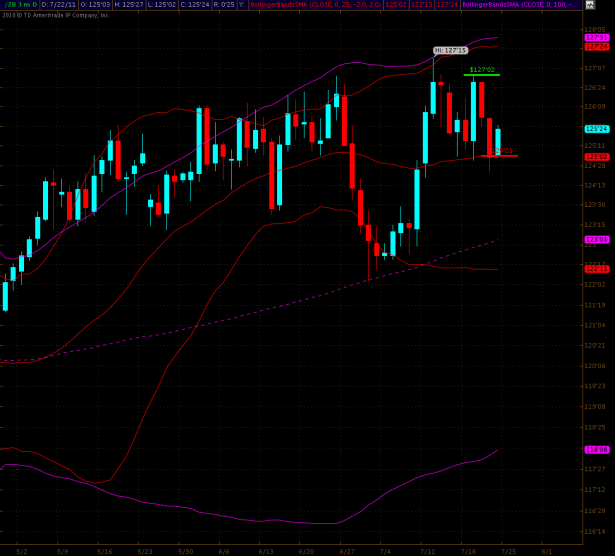 30-year treasuries currently holding the NLSL – amazing how those levels are being observed almost exactly over and over again – thank you Chris Carolan!

Well, same situation as in copper or in equities – we are at an inflection point and a decisive directional move here will determine what’s in store for the coming weeks/months. It’s summer and of course the tape is doing a good job at driving us crazy – I recommend to remain patient and wait for these key markets to cross their respective thresholds.