UPDATE 9:45am EST: Looks like we didn’t get that rally we were hoping for. 776 is the next long RT – right now this bus is basically empty, which completely sucks. In any case, the one chart you guys need to keep in mind right now is not today’s tape but this: 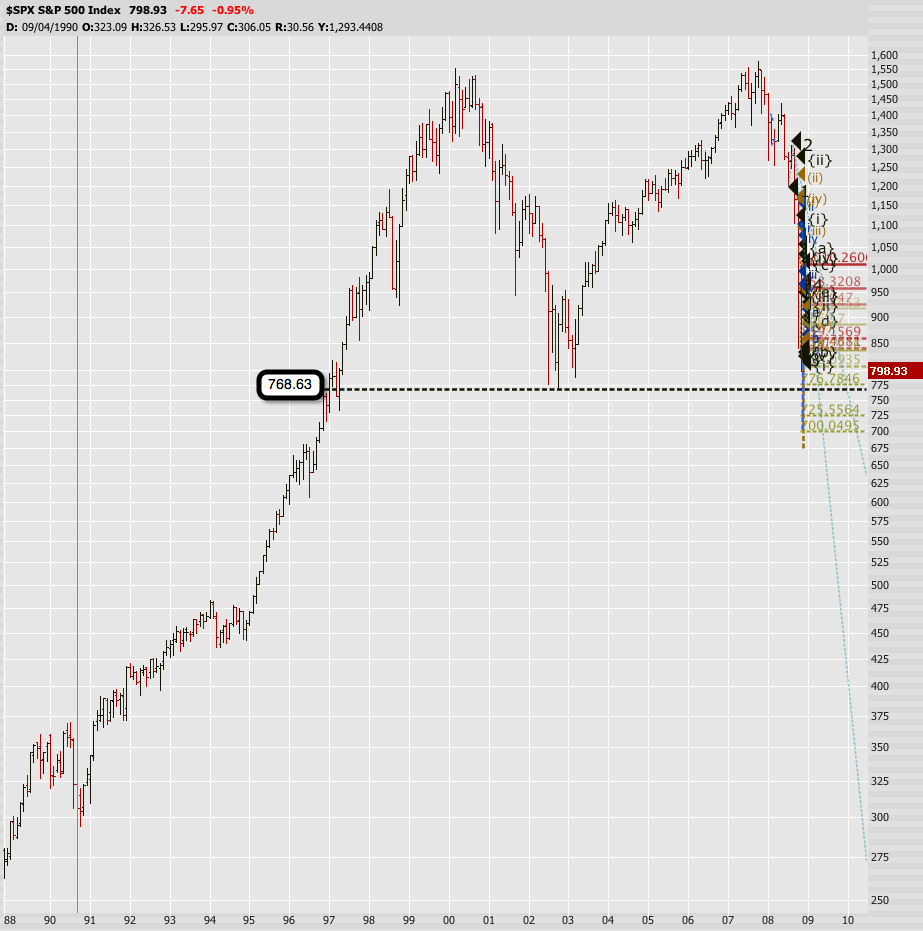 That’s a nice double top, wouldn’t you say? If we close below 768, all hell will break loose. I am not saying that will happen today, but it might happen Monday.
[some content removed upon 3rd party request]

Also, light sweet crude futures (CLZ8) are touching the 50 mark – this must be below the current production costs for most OPEC members.

UPDATE 10:18am EST: For your convenience here’s an updated SPX chart including the new corrected RTs:

Erik over at TradingAddicts posted the average crude production cost – which is very interesting in the context of light sweet crude hovering slightly above 50: 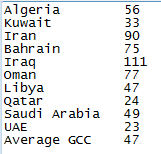 UPDATE 10:40am EST: Glad I got out of those calls right away – gold star to myself for good timing. Would have been actually faster wasn’t I so busy spoiling you leeches. Anyway, Berk points out that the wave up looks like a nice a,b,c. 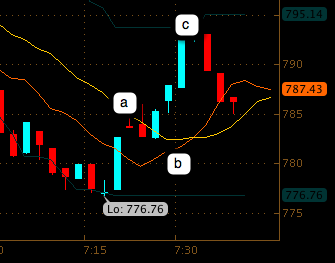 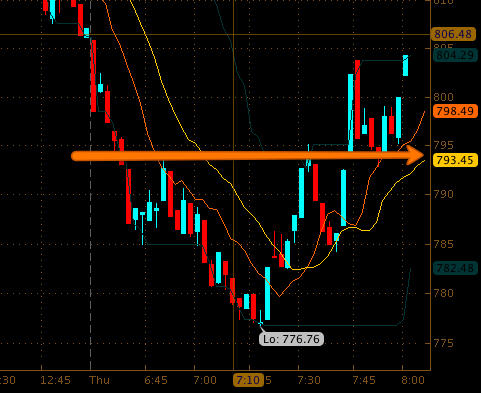 UPDATE 11:18am EST: This might be it for our little rally. Yen is holding slightly below its pivot and my stochastic says that it’s oversold. If the Yen rallies from here, watch out below for equities.

UPDATE 11:36am EST: Okay, the next leech who asks me to post my Yen chart gets booted off the blog. Here it is – make a style in TOS and watch it – I have been posting this 100 times in the last few months – grrrrr. 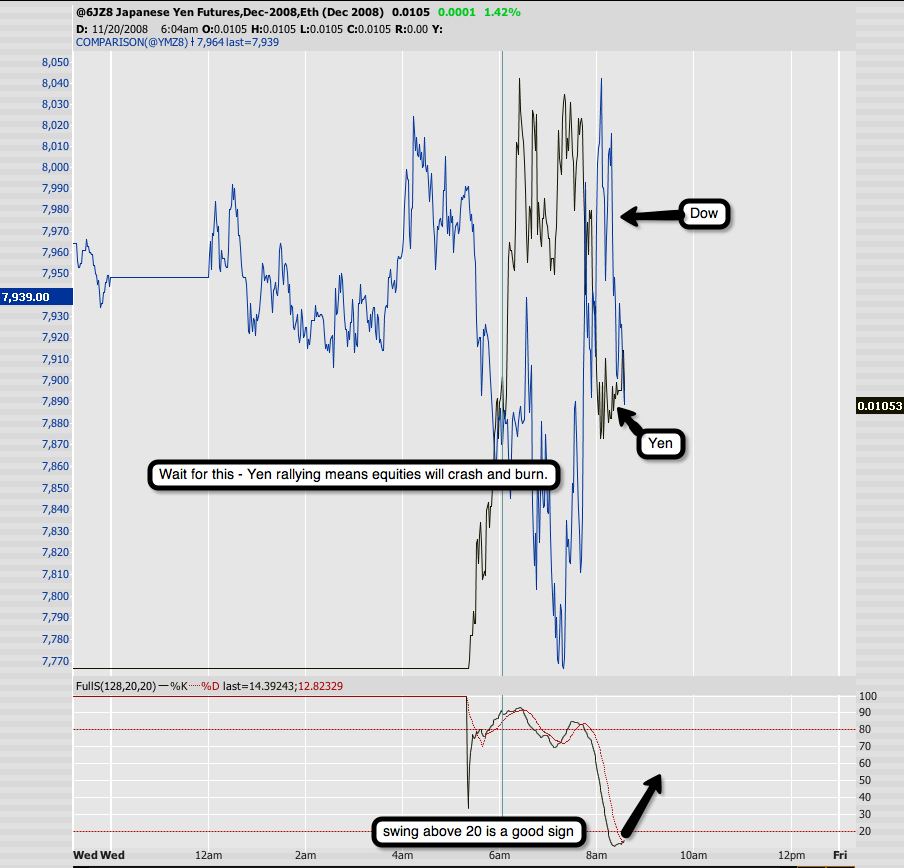 UPDATE 11:44am EST: Okay, in case we plunge – I do like DRYS, GNK, MOS maybe, WYNN, and especially RIMM. Anyone else? Shoot out some symbols please – you leeches are useless today. I’m working my ass off over here – show me some love – I can’t do it all on my own (kudos to Erik again – he’s on fire lately it seems).

UPDATE 12:06pm EST: Here’s the retest – should be our chance to load up on puts.

UPDATE 12:19pm EST: Okay, this doesn’t make any sense to me – the Yen should have breached this pivot. I just jumped out of my puts again as I don’t like the tape. I just can’t have that Yen start tanking like this while it’s completely oversold. Again, let’s remember it’s expiration week, MMs are eager to push the market up. I’m in holding pattern right now.

UPDATE 12:26pm EST: Yen just dropped through R1 pivot as well – completely tanking. I’m stepping aside now, lost only a few bucks on that whipsaw but I’m not chasing this. Seems my initial instincts were correct but the Yen threw me a little curve ball here.

UPDATE 2:07pm EST: Paulson is on the tube – keep an eye on the ticker:

UPDATE 3:05pm EST: I think we might have breached that pivot on the Yen. Still cautious because of my stochastics telling me that it’s overbought. It rarely lies to me – if we were lower on the stochastics I’d be jumping in here. Maybe caution will get the better of me today, but I need to stick with my system, even if it hurts and I miss out on a nice drop. Once you neglect you system you’re basically gambling. Even worse – neglecting your system and winning will guarantee you to get wiped out further down the line. Anyway, let’s see what the Yen does – if it keeps climbing here and NQ breaches 1065 I’ll pick up some SPY puts.

UPDATE 3:39pm EST: WE BREACHED 768 ON THE SPX – IF WE CLOSE BELOW THIS LEVEL TODAY WE WILL SEE A MASSIVE DROP.

UPDATE 3:46pm EST: In case you wonder why we just swung up. We touched the 1040 pivot on the NQ – I was holding SPY puts and sold them into strength right as it touched – got the perfect fill 2nd time today. There is a reason why I keep hammering those into you guys – watch those indicators and you will bank some mighty coin.

UPDATE Closing Bell: Well, Eric called it again – here we are at new lows for the day. What’s eve more important is that we closed below 786, which is an extremely important level. We bascially just confirmed a 5 year double top – you figure it out 😉 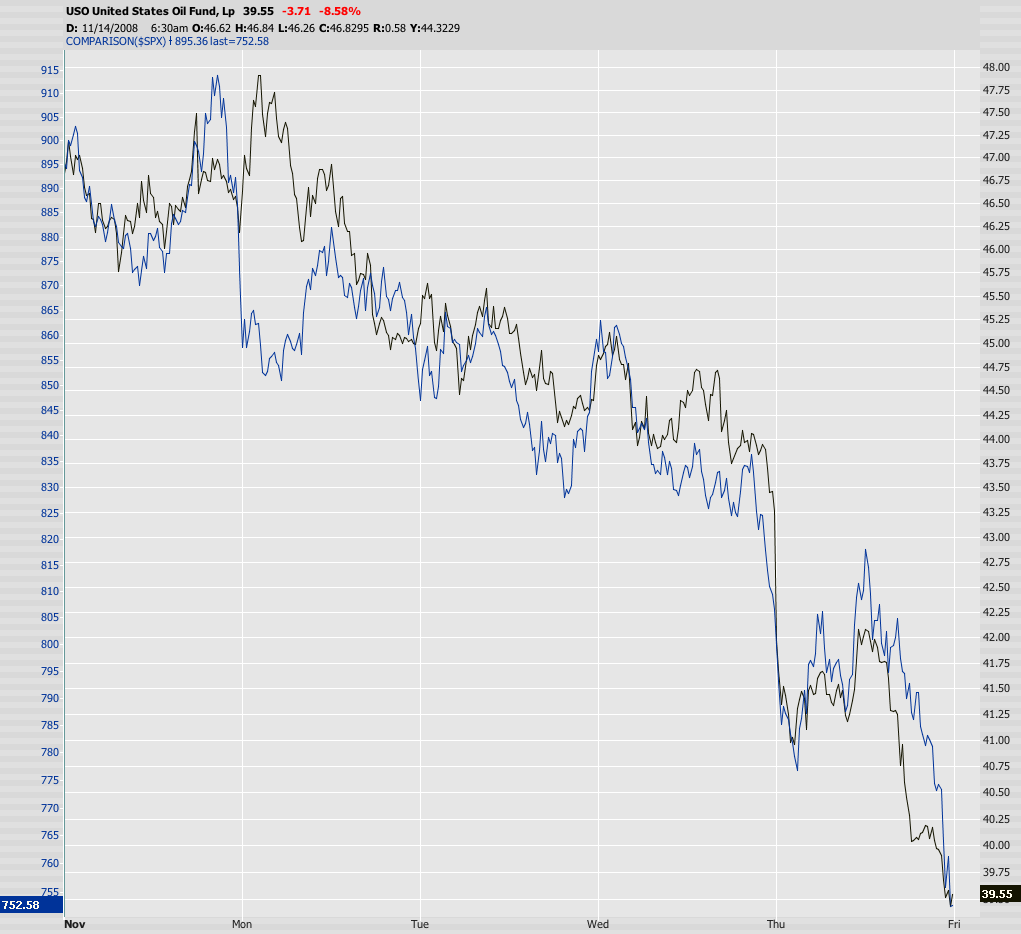 Anyway, in closing – since Eric keeps pushing his USO chart I set up a comparison between the two (black is USO) – what’s interesting is that the SPX seems to react in an exaggerated fashion, while USO calmly points the way. Food for thought as to the nature of this correlation and how to use it as an indicator.