UPDATE 10:00am EST: Now that was an interesting retracement after the initial gap. Someone was commenting that the ever looming hope for salvation was wearing on his nerves and my response was to get used to it. That’s why Prechter coined the term ‘Slope of Hope’ (and someone else named some unpopular blog that way) – the human mind is not well equipped to the gyrations and tribulations of the stock market. In a bear market investors have a tendency to slide the slope of hope – it’s a psychological fail safe system:

This is a chart of the 1929 crash and the ensuing bear market ending in 1933. The bubbles are news clips that were issued during the progression downwards. Anyway, click on the image and it’ll show you a page with all the clippings. After reading that you might have a better idea of what’s ahead of us and how to judge the daily headlines you will keep seeing in the news. Most of us might not read printed news papers anymore (another industry bites the dust as expected) and we all now have fancy computers and other electronic toys giving us access to the news, but we as humans have not changed a bit. We’re as silly a ever and that is most likely not going to change.

There have been some confusion about the color changes and the tiny little lines on the Zero I put up last night. People – nothing has changed – I am just making slight modifications. If it was anything major I would have put it right on the screen grab. Be assured that I will be working on updating the tutorial over the weekend – unfortunately there are only 24 hours in the day and I’m already working 18 of them. I do appreciate the enthusiasm and the continued interest. I am also aware that nobody wants to see an indicator change all the time. However, at the same token, many of you have been clamoring for trade signals and that’s what I have been busy adding. Nothing has changed with the underlying algorithm and if you compare prior screen shots to the pattern of the (now) white line, this will be abundantly clear. Just give me a few more days to finalize the tutorial and we should be good to go.

The good news is that the tutorial will now be a lot simpler as people really only have to follow the VTAs. 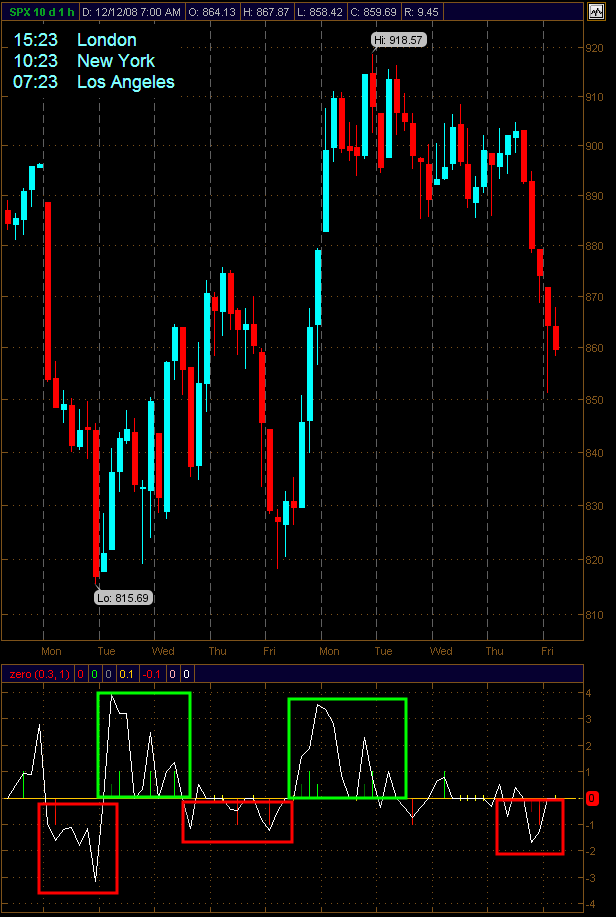 A reader sent me a similar version of this and I added today’s drop in the markings. What I find interesting today is that the intensity of the signal line (in white) is a lot smaller than what we have seen in prior break outs this month. It’s way too early to assign meaning to this but I think we should take note. Maybe, and just maybe, the size of the signal can be correlated with the expected size of the move? Now, throw in retracement levels and this might open up a whole new dimension of how to manage your trades. Again, don’t go all nervous on me now – nothing has changed and I’m just throwing out a few thoughts. If you find yourself breathing through your mouth you can safely ignore this posting.

UPDATE 12:51pm EST: TNX is still up and Yen seems to have run into some overhead resistance. NQ just passed the 1197 pivot and YM is pushing through 8620. Zero is about to give a long VTA and I intent to take up a small long position. Will stack if we see more momentum – obviously right now everyone is waiting for some Detroit related bailout news.

UPDATE 1:30pm EST: Market is in gyration mode right now – everyone’s waiting for those bailout news – as if it’ll make much of a difference. Strange how human psychology works. Anyway, it’s December 12th and I’m only taking on very small positions at this point. The big players are decorating their Christmas trees already and if you recall the Thanksgiving week, market is now becoming very sensitive to monkey business. No sense to burn cash in this environment…

UPDATE 2:00pm EST: Take a look at this Gold chart: 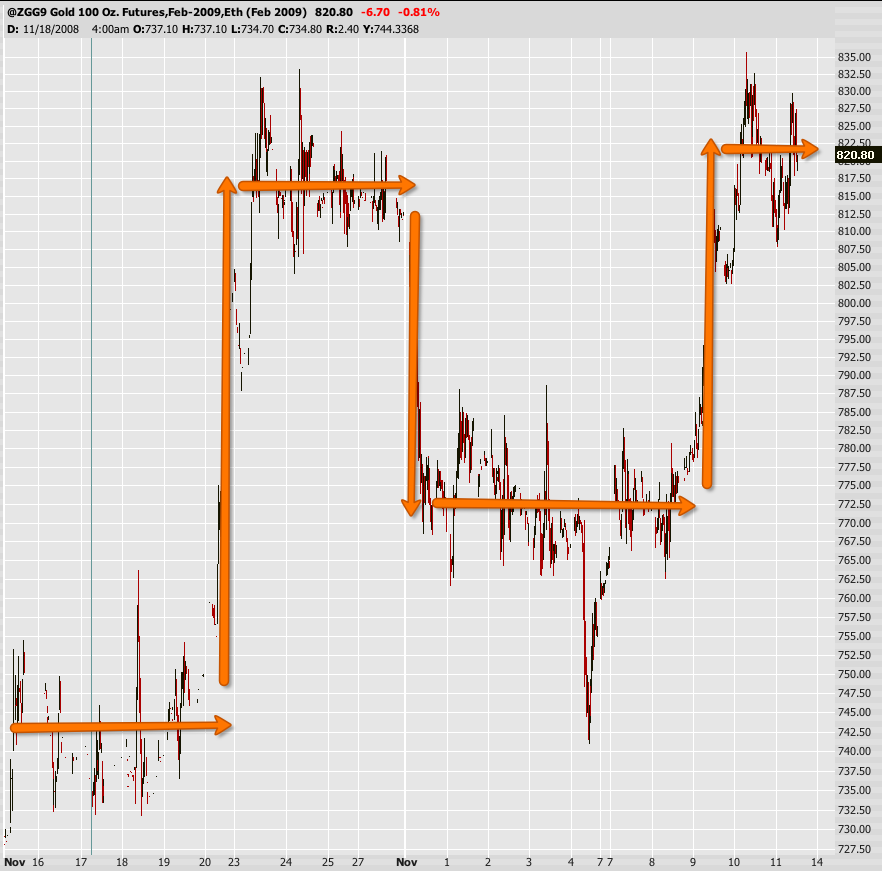 I know this sounds strange but it reminds me of a read-out of a digital signal on an oscilloscope (yeah, I used to be an engineer). Now, I don’t want to jump to conclusions but the thought has occurred to me that the spikes might be generated by program trading. Gold has lagged Silver as of late which has been flat like a flounder. This is supposed to be bearish for Gold, but I am not confident enough at this point to burn theta on puts. Unless you got positioned right at the cusp of these moves you probably had to either give up or found youself waking up to a considerable loss/profit. Now, if you believe in fractal theory (and I do) then the next turning point may be only days away. Also note how little Gold has moved during last night’s panic sell off in equities. A lot of food for thought….

UPDATE 2:14pm EST: Here’s a quick preview of a chart that will be added to the new tutorial this weekend: 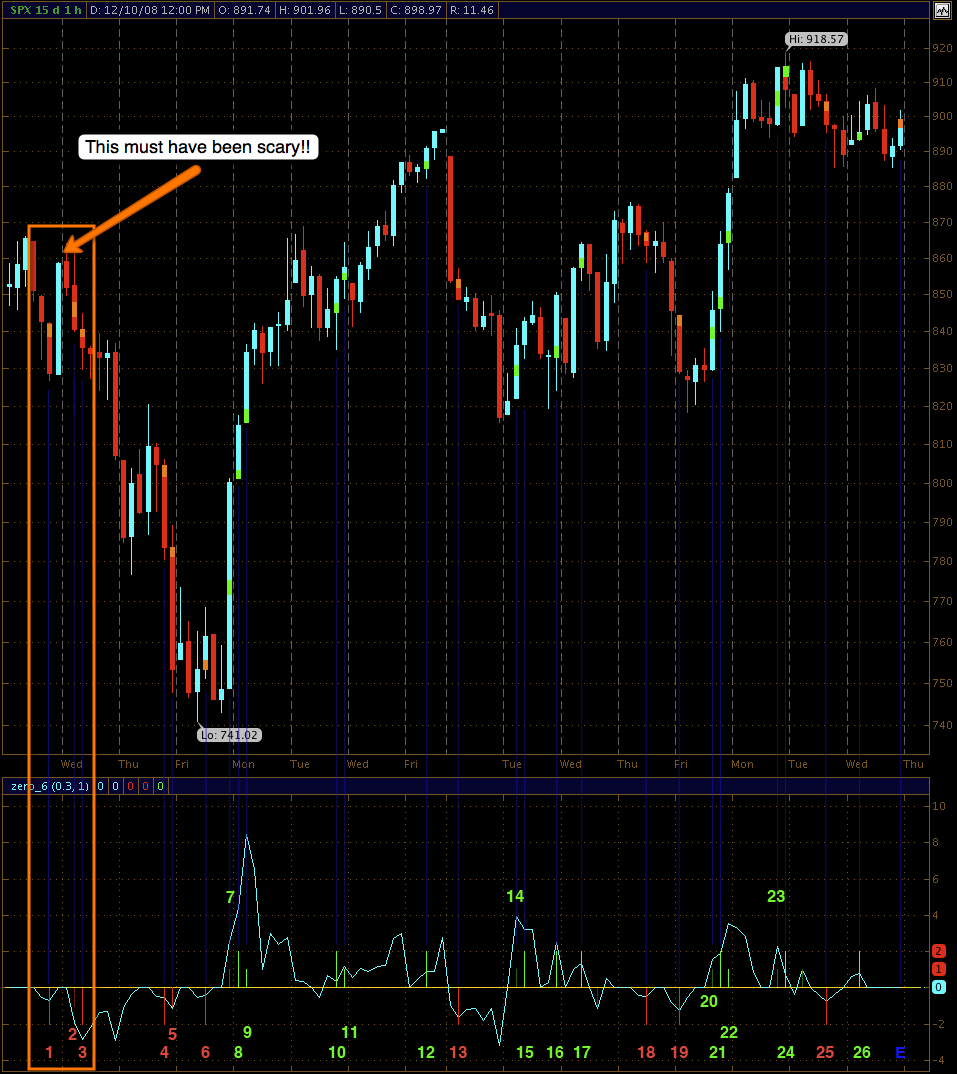 I have written down all the entries and exits and will be updating the case study in the next two days. However, what I wanted to point out is the area which I framed. See the short VTA – the very first trade? That must have been scary to sit through! However, the Zero did not buy it and stayed below – it might have swung above briefly but since it’s a maribuzo candle I doubt it reared its head above the zero line. Well, that patience paid off – which is a point that one of our newer readers just made.

Anyway, these are the 20 days before this Wednesday. I think it gives you a good idea of how the Zero performs in varying conditions.

UPDATE 3:38pm EST: Some of you seem to be on a Zero update crack feed. No need to report the signal here – people who care are watching the chart. Listen, there is nothing the Zero can do about a market like this:

I mean – look at these candles! The Zero is not a crystal ball – it feeds off of market sentiment, which is whack today (even more so than usual). It cannot make the market move – it can only report on the general trend, which has remained slightly bullish since that ETA. Did I take my position off the table and lost some? Yes, but had I held it and believed the damn thing I would actually be sitting on slight profits right now. We didn’t get a green line up and the market reversed and droped 20 points. Let’s keep things in perspective folks – this is a trend trading system and that’s why I posted the chart further above. If you can’t sit through some losses you should not trade the Zero (now I have to take my own advice).