UPDATE 10:09am EST: Halfway through this week (almost) – anyone having fun? Didn’t think so, unless you’re a swing trader. I have to admit that the first half of yesterday’s tape was actually quite pleasant, but things reverted back to chopping hamburger meet in the final hours. Something that is very apparent during expiration week is that some of my indicators start bing ‘soft’, brought upon by market makers riding the tape up and down. My first instinct as a trader is to proceed very cautiously, although for the daytraders among you this can be pure manna from heaven. To each his own – I have been dabbling in some swing trades as I hate to just sit and watch all day, but there’s an easier way to make a living.

Anyway, here are today’s retracement levels – mind you that yesterday’s low of 826 was spot on. 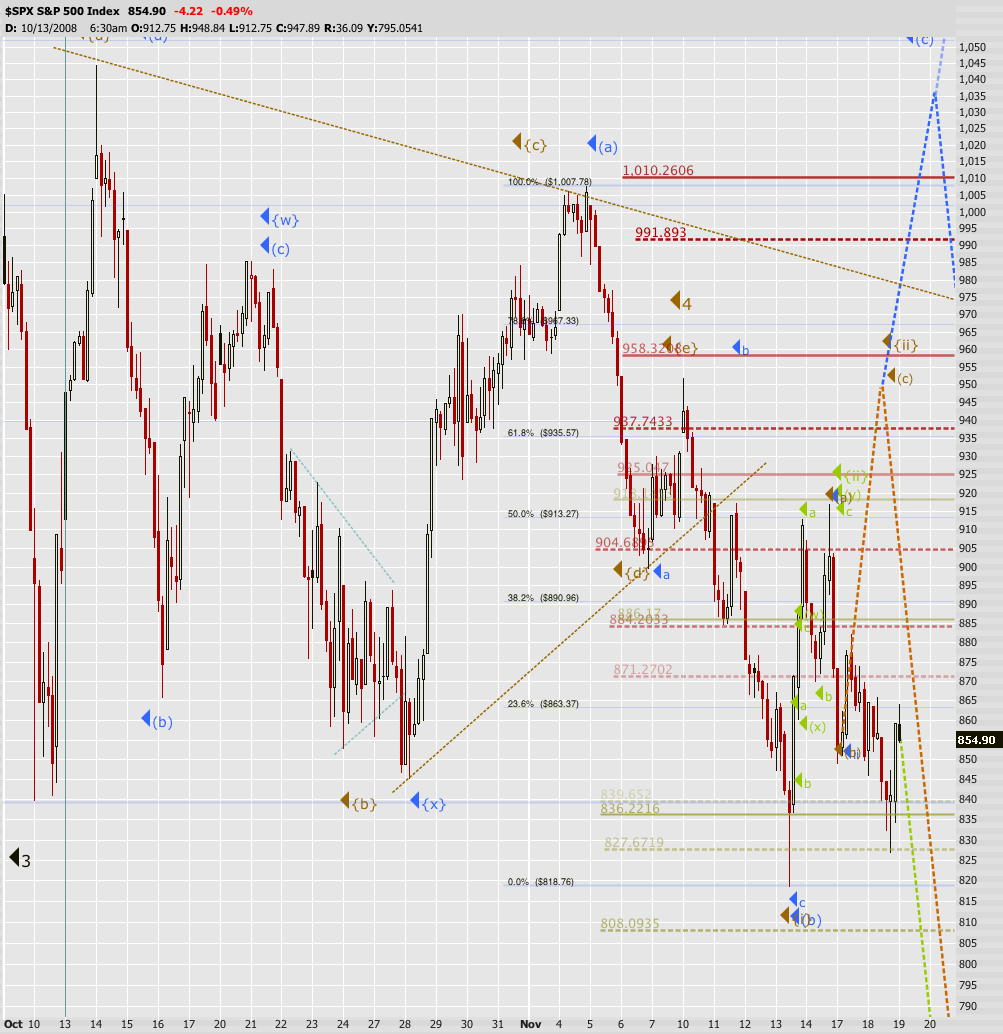 We’re right at the 1168 NQ pivot right now and Yen is pushing up – expecting more sideways chop in the next hour or so. Also watch the 1.0320 pivot on the JYZ8 futures – if we breach those we might have ourselves a rally at hand. In terms of the wave count the tape seems to favor the upside as a further drop from here would meet several layers of resistance. We’ll continue to watch the situation and will chime in as things unfold. Whatever you do, don’t jump in/out here like crazy – the day still needs to pick a direction.

UPDATE 10:48am EST: I was pretty lucky to grab FSLR, MA, and some SPY right at the top. I’ll probably get out when we hit that 1140 pivot on the NQ. Watch that level and reload on a breach – lather, rinse, repeat. BTW, if we keep dropping today I think AAPL and MA are great to kick the crap out of. Just about to drop through the 80% line on my stochastics, plenty of juice left.

UPDATE 10:55am EST: Dkpa – a fledgling new rat – kindly points us towards the CPC I mentioned the other day: 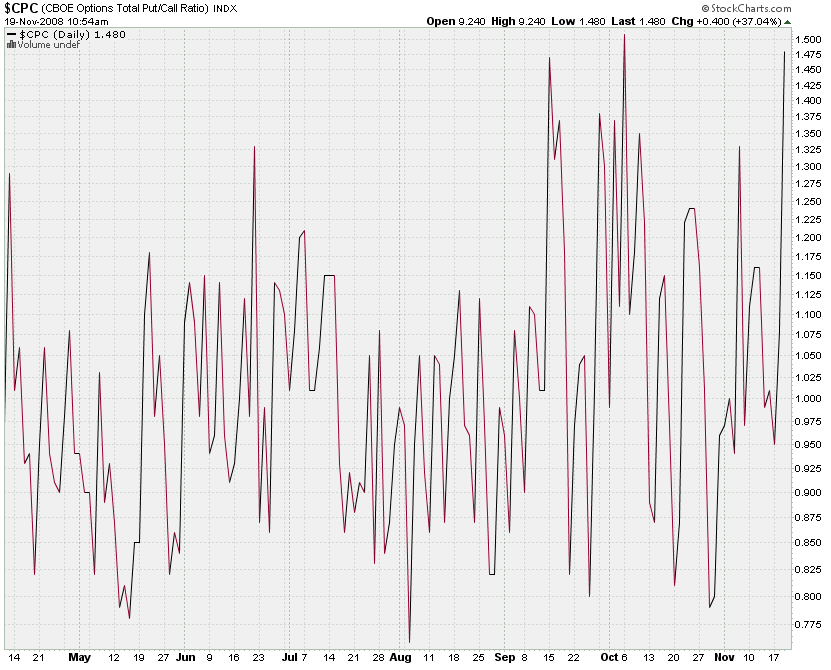 Frankly, it’s a bit early for this – didn’t expect us to hit those levels until the end of whatever pattern is unfolding right now. Be careful out there – we could see a very violent snap back in a short order. BTW, please point up dkpa for this great intel.

UPDATE 11:01am EST: BTW, the 839 RT level which matches the NQ 1140 pivot has odds of 31% to be successful. I think we should watch the Yen and decide, but thus far both are holding. FYI – the Yen’s stochastics are pointing down right now – I don’t see massive strength (yet). I’m on the fence but will jump in when I see some conviction either way. Again, watch the 1.0320 pivot on the Yen – it needs to hold for a continued drop in equities

UPDATE 11:17am EST: Okay, key observation: The Yen is pretty weak right now but the market is dropping anyway. The bulls better pray that the Yen doesn’t wake up or Kansas is going bye bye. Or, it’s another monster bear trap – wouldn’t be the first time. BTW, if we drop from here, the AAPL will be ripe for the plucking.

UPDATE 12:14pm EST: Careful now – the Yen just hit its 1.0370 pivot and I’m not sure it has enough juice left to breach it and drive a continued drop in equities. Also, we have been going sideways in the YM, NQ and ES for the past hour – despite the Yen rally. Contrast that with what I was saying about equities at 11:17 and you are rightly should be confused. I don’t feel the love here – maybe I change my mind if we get a confident drop through the current chop zone – the candles I’m seeing right this second might be a good start.

UPDATE 2:00pm EST: I don’t want to sound like a broken record, but I do not trust this tape further than I can throw the average overweight fund manager. 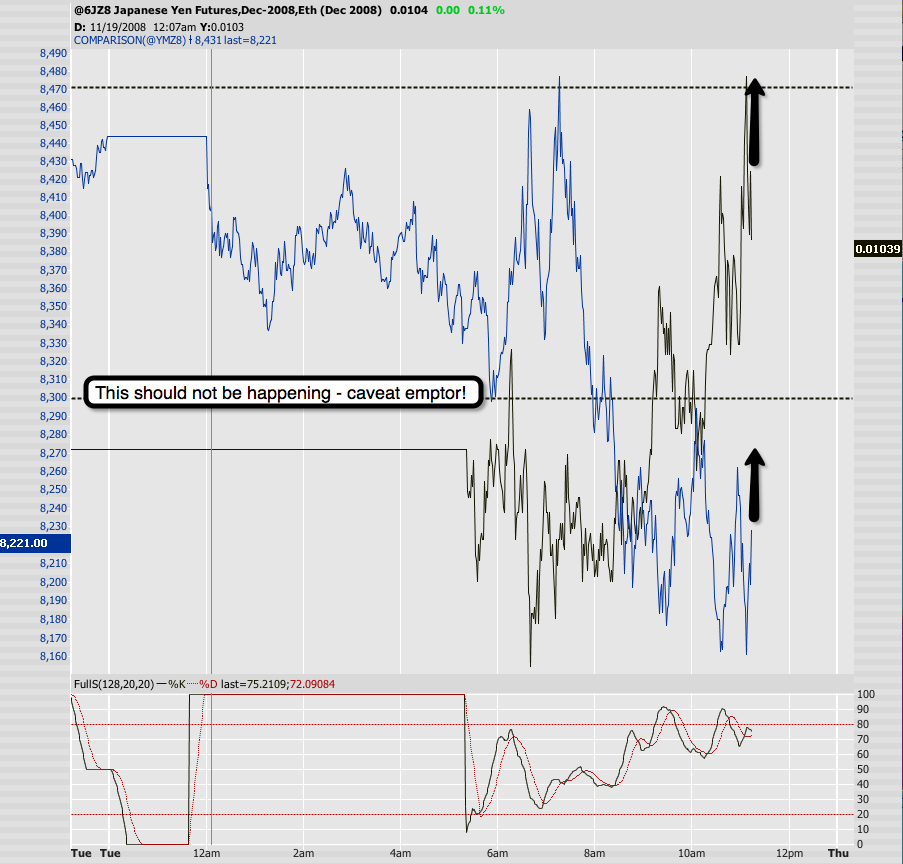 We’re kind of driving blind here – and I don’t like gambling in Las Vegas casinos. 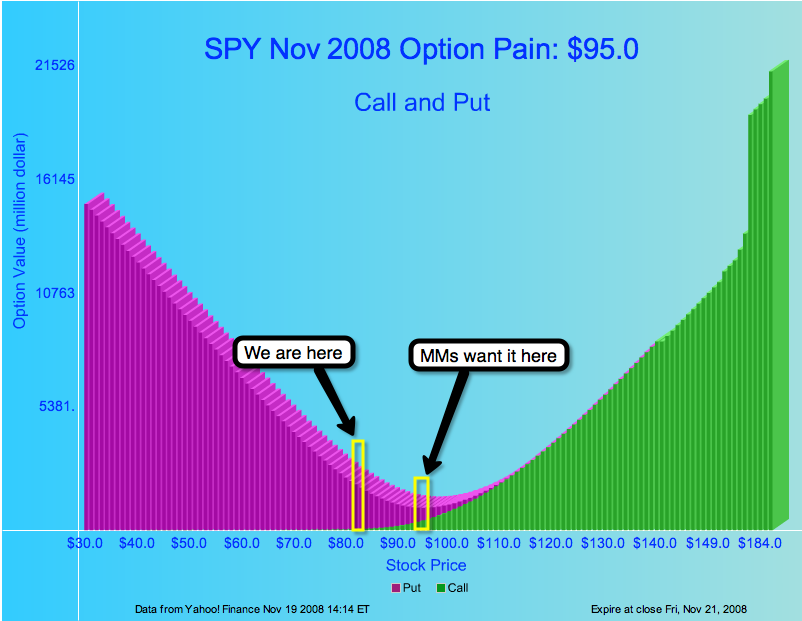 Maybe that’s why the Yen pushing up doesn’t matter. It’s expiration week and the market makers do not want to move further away from their sweet spot.

UPDATE 2:36pm EST: Mmmmh – 822 on the SPX, that’s quite a ways away now from that 827 RT level. Maybe Erik will get his drop after all. Let’s hope so…. I can’t take the whipsaw anymore. BUT I’m still cautious – this tape reminds me a LOT of last Thursday – not falling for that again 😉 I mean, we should be tanking with conviction – it feels like (I’m almost ashamed for using that word) as if the MMs are pushing it down just a tad more waiting for more bears to jump in. Nobody falling for it yet? No? Alright, let’s drop it by another 3 points or so… Caveat emptor, my dear rats – don’t be tempted by greed – follow your indicators. If you have none – dont’ follow mine.

UPDATE 3:45pm EST: Before you guys get too excited – there is a strong long RT level at 808. Might be where we bounce. In either case – horrible tape today – although Erik got his drop I’m comfortable not playing this down.