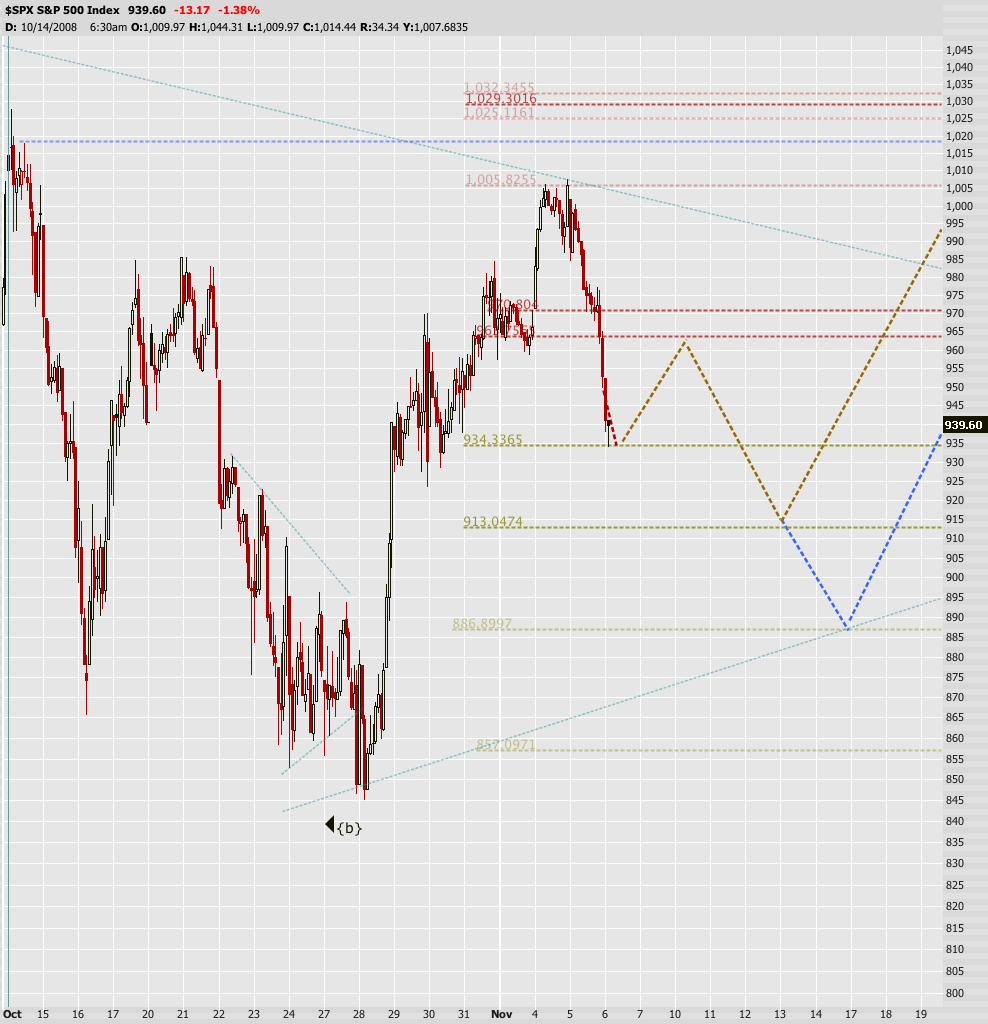 UPDATE 10:15am EST: Take pofits now – we are at an strong retracement level. We can always grab more contracts if this one is being broken.

UPDATE 11:07am EST: I feel like I’m on fire today – this market reads like a book (except the TNX, that faking out little bitch). Anyway – watch the 930 pivot/retracement on the SPX today. If we breach that it’ll go to 913, otherwise I think we are either going sideways or put in a little rally later in the day.

UPDATE 11:24am EST: I just want to point out that the market DROPS after consolidated rate cuts in Europe and Australia. We have slowly shifted down from a rate cut (here or in Europe) causing a month long rally, to a weekly rally, to a one day rally, and now to a drop on the very same day. The market now knows that rate cuts make zero difference in affecting economic fundamentals. And that is what the market is focused on right now – GOOD – that’s how it should be.

UPDATE 12:24pm EST: Well, what do you know – we actually made it to the 913 pivot – wow! Yes, would have been nice to hold all the way to here, but I’m happy with what I got. Now, my focus is on that particular pivot for there is not much to hold if we drop through this one. If we do I’ll probably load up on some index puts.

UPDATE 1:14pm EST: 913 on the SPX broke and there’s not much underneath. So, I’ll be adding puts here as we drop. Yen also seems very strong today and the TNX keeps dropping right now – probabilities are in favor of market dropping further (right now).

UPDATE 2:06pm EST: FYI – once/if the Yen breaches its lower pivot around 1.0226 I’m buying index calls. Things seem to be lining up for a late day rally, but I’m not super confident just yet (see above ;-)) Let’s see what the Yen does – it’s pretty overbought on a short term basis and if it drops the market should try a little reversal here.

UPDATE 3:28pm EST: I wish I could do that for real – the whole Parkour movement has me fascinated:

In other news – we just made new lows on the Dow – I’m not holding anything as I don’t see an entry. I might do a quick scalp with some DIA puts, that’s all.

UPDATE Closing Bell: Great day everyone – hope you leeches banked some coin. Kudos to Gumbo for proving me wrong on UA – nice job – seems short term stochastics didn’t matter after all. Hey, remember all the crap we were getting for being ‘negative’ just 3 days ago? Well, the market has dropped 1000 points since then – who’s your daddy now? 😉

Anyway, I’m all in cash now – don’t really care what happens to the job report as I think we might get some kind of rally. Berk will do the update tonight and it’ll be a good one.

Just kidding of course – we’re all glad you keep coming back.