I already mentioned this morning that I was having a very good day for various reasons. The one I left out was that I was working on something pretty exciting and was getting ready to make an announcement today. In essence my goal has been to extend Thor with a system that takes advantage of strongly trending tape. Thor does like trending tape but it’s not exactly what you would call a trend trading system as it takes advantage of pull backs. Which is why Thor didn’t catch the big moves on the EUR or crude in the past quarter. Not really a Thor problem as it’s not designed to do that – but I would be amiss to not at least try to produce a complementary system.

So I did a lot of thinking and looked at several hundred charts. A few days ago I presented a basic idea to Scott who quite frankly wasn’t really sure he understood what the heck I was on about. But I was sure that I was on the right track so on Wednesday morning I started coding the rules and by late afternoon that very day I had a very basic (but slightly buggy) version running. When I started to test it I was pretty amazed by the results and I first thought that I was missing something. However, there are only three basic entry rules in the system and the campaign management is identical to that of Thor.

I ran it through my very own backtester which unlike the built-in NinjaTrader tester allows a second short term data series and therefore executes exactly like the the strategy would in live tape. I have tested this module many times and it’s absolutely accurate. The results, to be quite honest, are staggering – so let’s take a peek at a few examples and then let’s talk numbers: 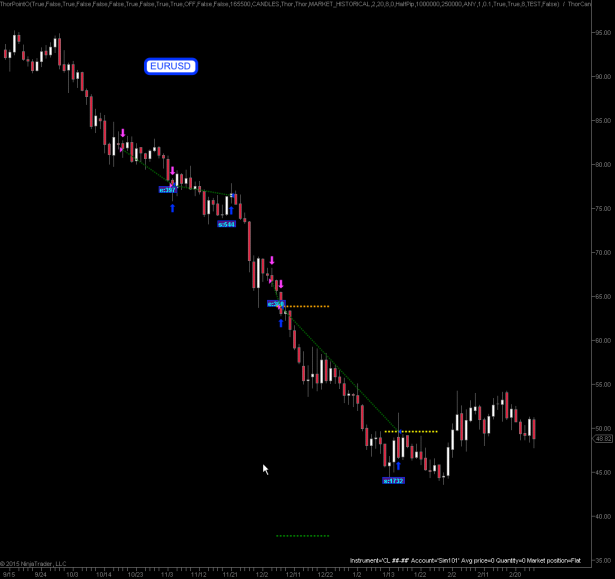 By the way I call it ThorPointO or Thor.0 – however you prefer to write it, and here it is running on the EURUSD. As you can see the campaign management does not have a target – it rides the trend via a pretty loose trailing stop – exactly like Thor does. One of my most favorite aspects of Thor actually is the campaign management which Scott Phillips developed over the past year – and I always thought it would be perfect for a trend trading system. 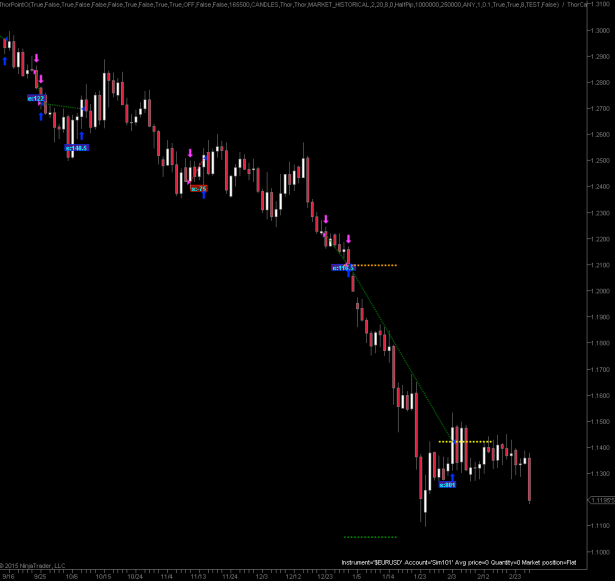 And I really think it came into its own with this new trending strategy as you can see above as it’s killing it on crude. 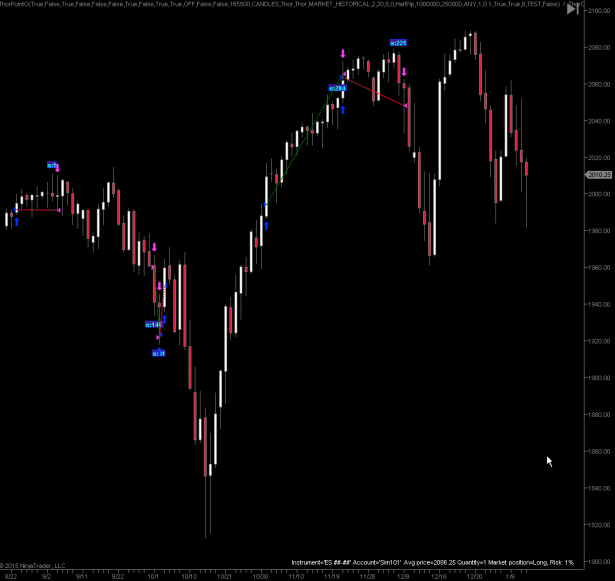 Here’s the E-Mini which didn’t really pull a long trend out of this one – actually it did much better on the NQ and the YM which surprised me a little. The old convict mused that he wouldn’t run those concurrently but I actually don’t see much overlap – the entries are completely different and do not run into each other. 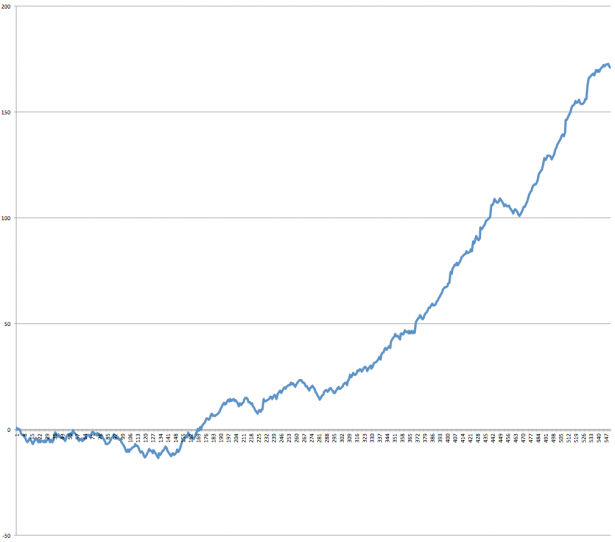 Now on to the numbers. I mentioned that I ran ThorDotO through my back tester but you don’t know the half of it. I just set up a high performance Windows system in PA near my data provider and decided to use that one as it’s super high performance with 32GB of RAM and 24 cores – it’s a monster. Took me only two hours to run through 34 futures and forex symbols – the very same ones we trade with Thor. I combined the results in a spreadsheet and the resulting graph is shown above. We are talking 554 trades in the course of 700 trading days – roughly every session since June 2013. I would say that this is statistically viable and diversified enough.

The numbers are pretty stunning if I may say so. Expectation came out to 0.31 and that is absolutely without ANY optimization – just the raw three rule entry system. I am already seeing things that I am sure we can filter for and that’ll be my task for the coming week. SQN(100) comes out to a whopping 2.73 and max drawdown was 13.3R. The total in risk was 170R – if you would have started in 2013 with $100k and only risked 1% on each campaign you would be up to over $500 today. Now that’s exciting but even more exciting in my mind is the growth curve which is as good as one could hope for. Which means that I would happily play this one with 1.5% or even 2% position sizing. Which really cranks the compounding but I don’t want to throw too many numbers at you guys.

Where do we go from here? Well, Thor subscribers can rejoice as I will be adding ThorDotO to the existing subscription for free. I may make a few more adjustments over the next few days and then it’ll go live by early March.