Is The Party Over? 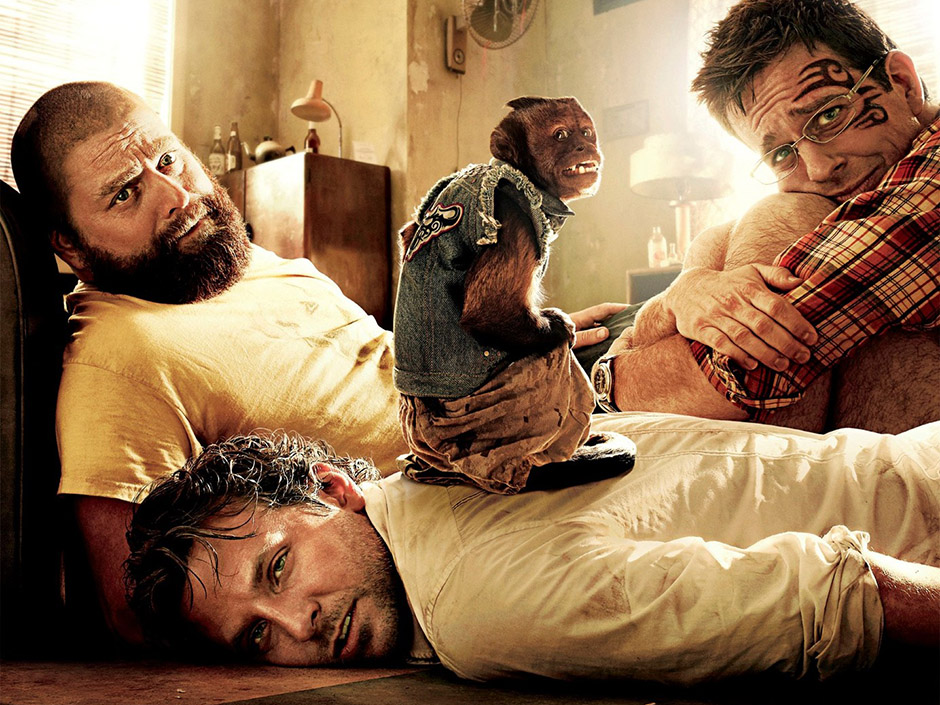 With a new administration on its way in and growing concerns about the Fed’s unmitigated money printing initiatives many are starting to wonder if the big stock market party of the Trump years is finally over and where we may go from here. Given that social spending is expected to massively increase along with taxation in the upper income brackets the dynamics that have been driving the market could rapidly be shifting.

In order to shed light on what by all intents and purposes is a complex and controversial topic (since politics is involved) I prefer to start at the end of the story and then work my way backward. It’s a bit like cheating in a book review in that jumping to the ending usually reveals much of the author’s original intent and cuts out most of the fluff and misdirection.

At least that applies to 90% of literature out there. Timeless classics shine in that the journey is more important than the ending, but I digress. Above’s a graph I posted a few months ago which to my knowledge still holds true to this day.

It shows the June 2020 statistics for new retail account opens across several major trading firms. These numbers are completely unprecedented and point toward a massive influx of largely inexperienced retail traders eager to catch their piece of what appeared to be a never ending bull market on steroids.

Of course the COVID-19 lockdowns had a lot to do with this influx as it suddenly created a situation where a huge number of professionals in the U.S. and abroad found themselves working from home with a lot more freedom over how and when to attribute their time.

With retail largely ignoring the bulk of a decade long bull market large institutional trading firms and HFT shops enjoyed almost complete control of the market up until about the spring of 2020. However going forward the dynamics started to shift rapidly as the COVID lockdowns continued and the number of retail participants exploded.

The huge impact of this is somewhat exotic and mostly hidden from view, especially when one’s perspective is limited to merely looking at stock charts. But if you pop open the market’s hood you and dig deeper you quickly realize that something extraordinary is going on.

I understand that not everyone reading this is an avid options trader and thus probably not versed in the greeks. So I’ll try to explain what’s going on in simple terms. Let’s say you go and buy a call option at your favorite retail broker. This means that someone out in the marketplace has to take the other side of that trade and sell it to you.

In many if not most cases that would be a market maker or institutional trader who now faces a problem. By selling you that option he now is effectively negative gamma (as well as delta) and that’s not a good place to be in a bull market.

So what to do? Buy the stock – that’s what. Which in turn gets him back to a happy place with normal sleeping patterns and out of the reach of your friendly divorce (or bankruptcy) attorney.

Of course a lot of stock being purchased results in that stock going up, which in turn feeds into more retail wanting to catch a piece of that action. Since retail traders love leverage to a fault they usually prefer to trade options, and call options in particular. Many do understand how puts work but in most cases they are not used to trading them (successfully at least).

So they buy more calls and that in turn leads to more stock purchases by institutional traders and market makers. With a lot of retail traders bulking up on calls in comparison with puts this over time creates the situation shown below: 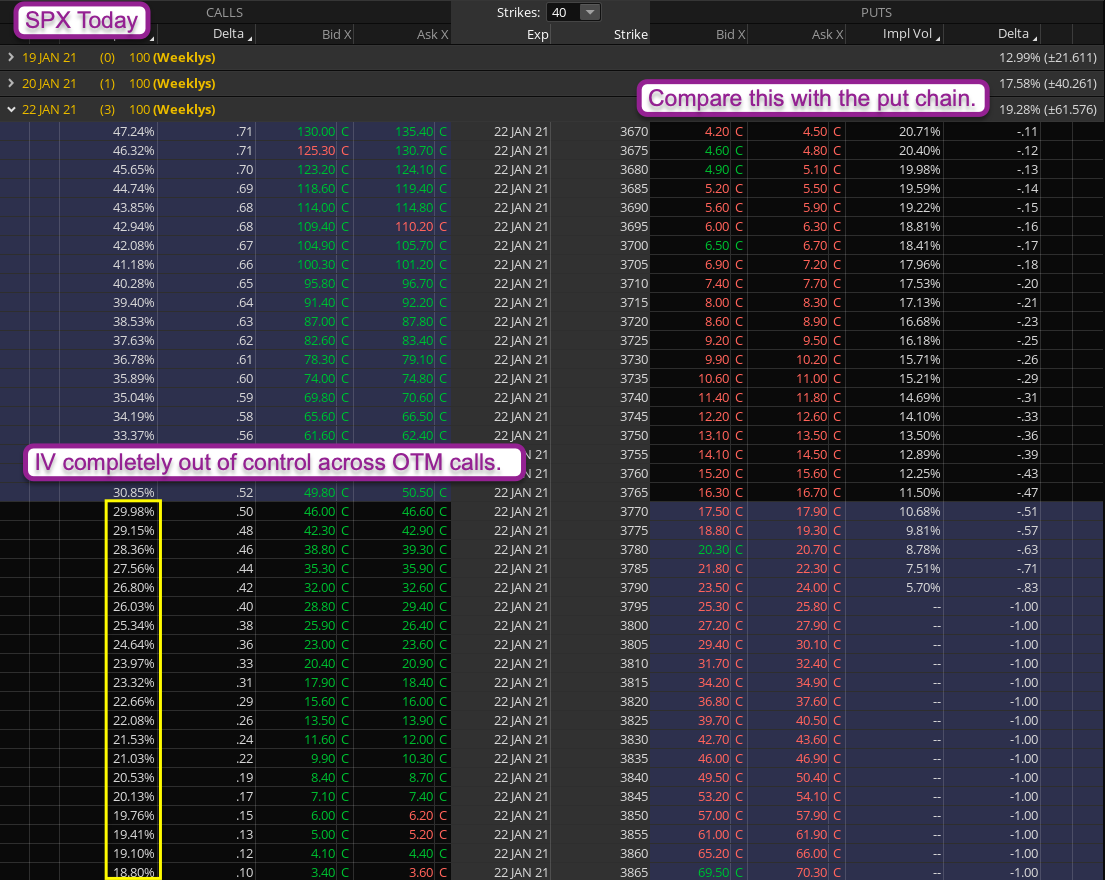 What you are looking at is nothing short of a massive gamma squeeze grown out of control. Look at the OTM call side of the SPX option chain I highlighted and then compare it with IV across the put series. See the difference?

Clearly the call side is being priced much higher in comparison and that’s due to an inversion of SKEW – the difference between how OTM calls are priced in comparison with OTM puts. 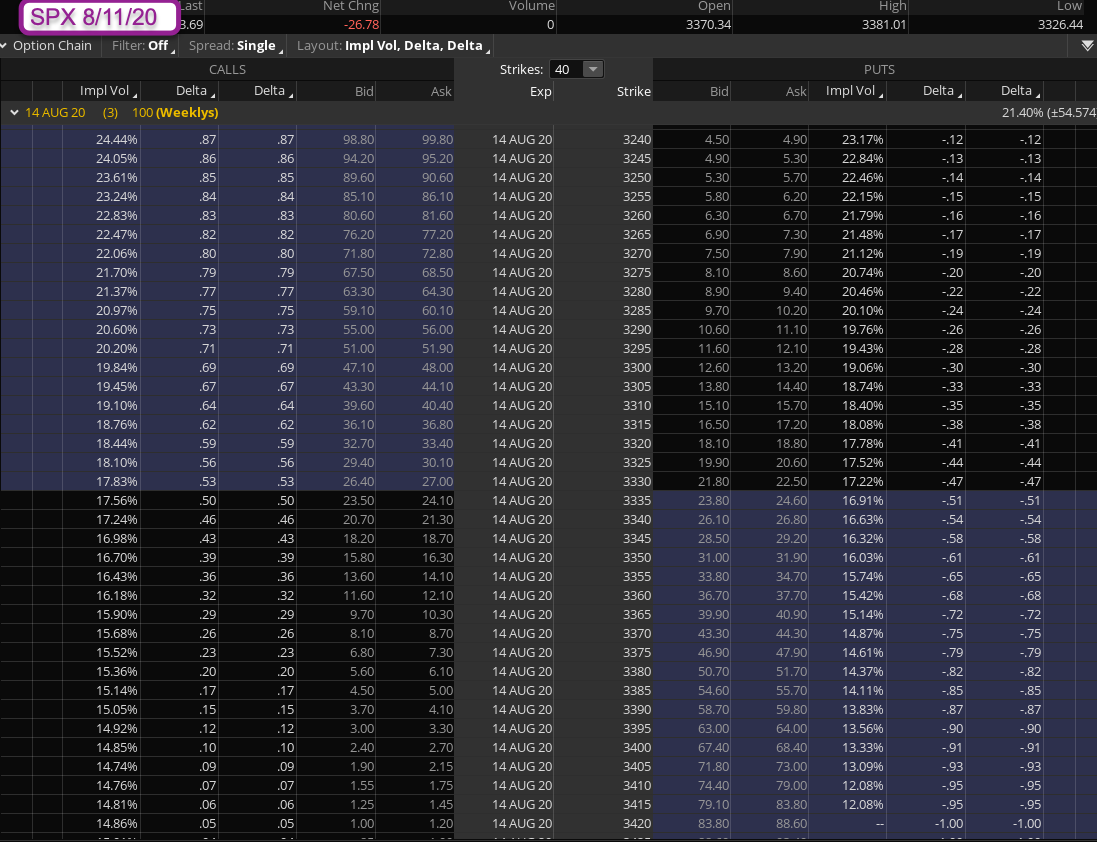 Let me assure you that this is not normal – here’s an example of what’s ‘relatively’ normal. This is an August 2020 screengrab of a similar SPX option chain with 3 days until expiry. Note the difference. 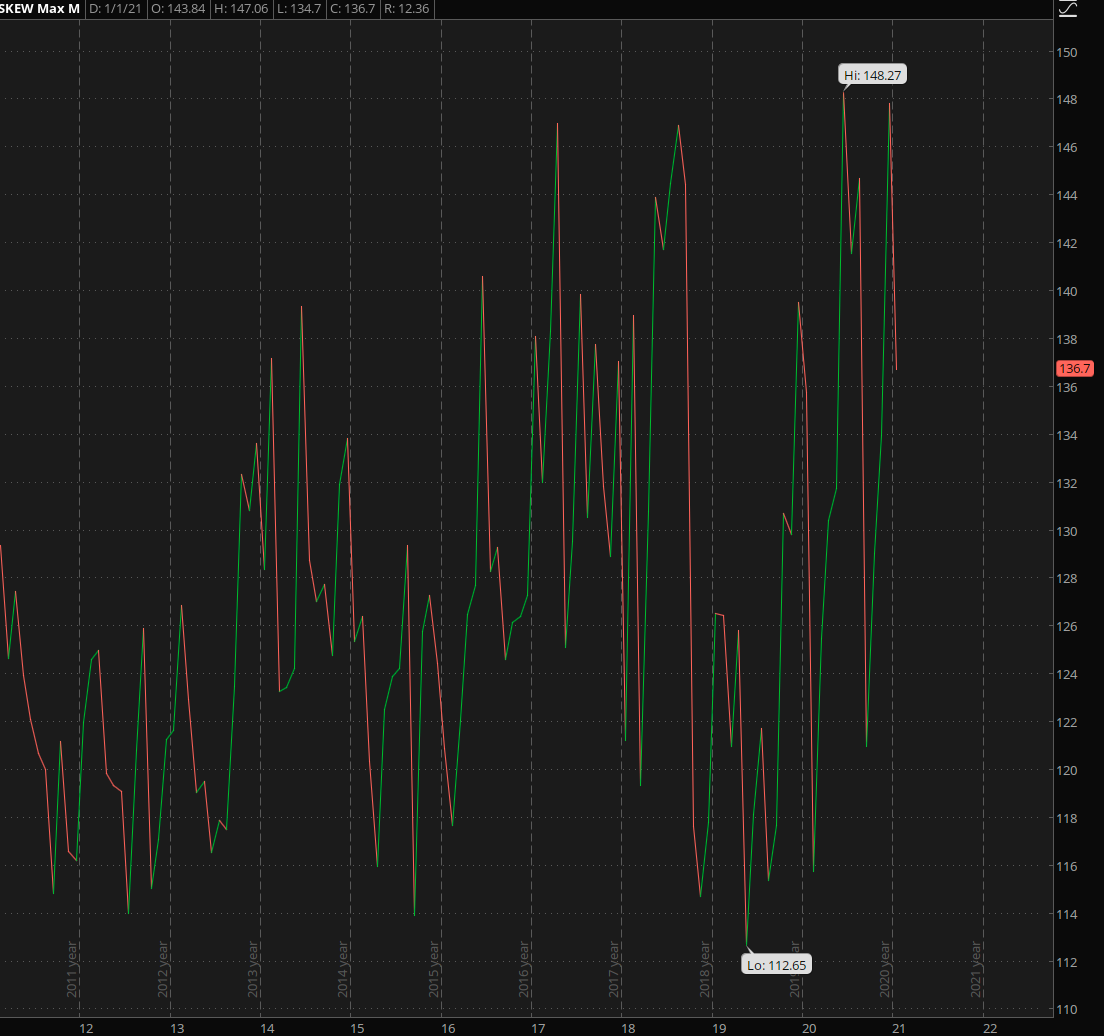 This long term SKEW graph quickly reveals that we’ve been in similar situations before over the past decade and that it’s not a situation that usually remains for very long. With everyone chasing risk and retail falling over itself to ride this late stage bull market into the sunset the big shoe is just waiting to drop sometime in the course of this year.

Just ask yourself this: WHERE are all the good news going to come from going forward? We don’t have Trump anymore tweeting the market higher. Social spending and continued lockdowns will put a damper on the economy, with the exception of big tech of course. Add to that the banking system, which is on threshold of another crisis, in particular over here in Europe.

So what to do about it and how do we not just survive what may come next but prosper?