It’s Crowded At The Top

Careful grasshopper! It may be lonely at the top of the entrepreneurial food chain, but it’s certainly getting a bit crowded at the top over in equities. Let’s review some of our usual suspects: 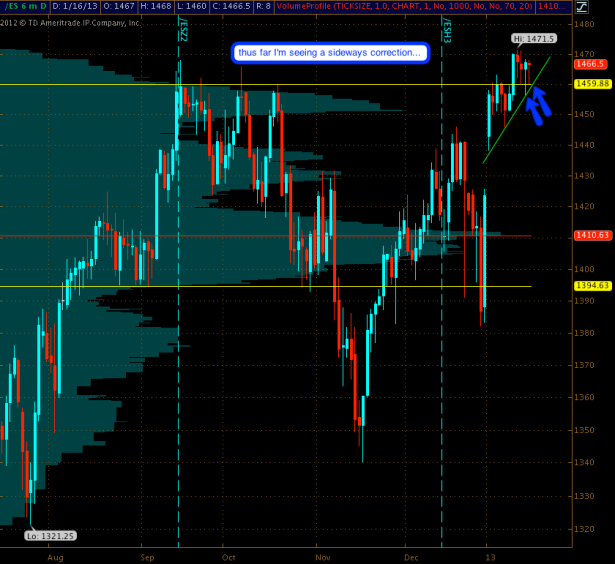 My most bullish chart right now – price (tough to argue with – so that’s why I’m putting it up). Still looking supportive and as long as this diagonal holds take anything below with consideration. There are cracks in the marble but thus far the edifice is holding up. 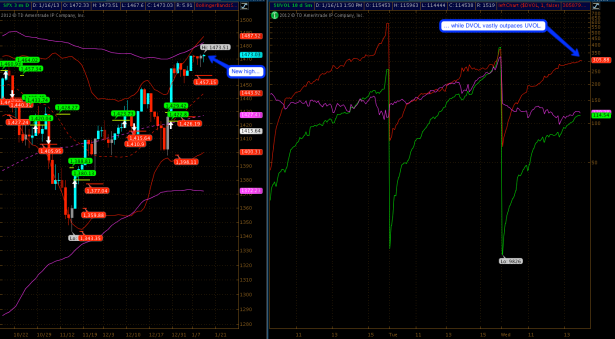 One of my salient ones today – UVOL vs. DVOL and quite obviously the latter outpaces the former by far. I hope I’m not looking at quirky TOS data so please check your own sources and report back here. 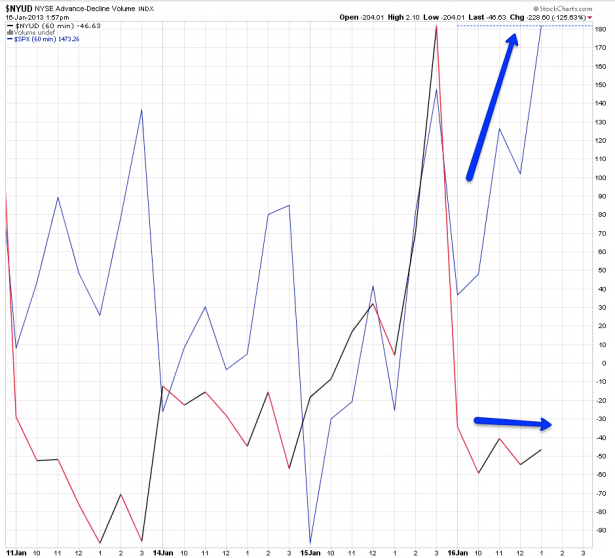 NYSE advancing vs. declining issues. The current trend on the signal is down while equities are tirelessly marching up. 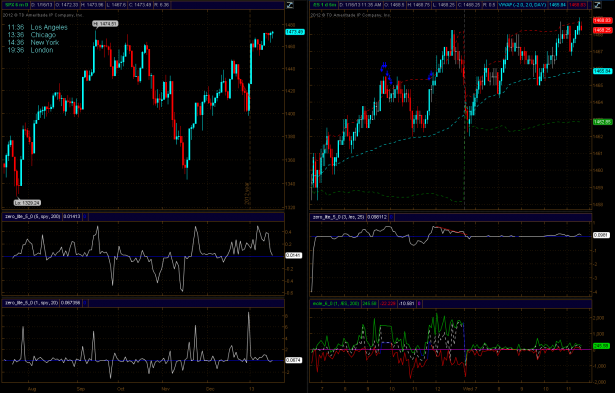 Finally, our trusted Zero indicator is showing zero participation today (right hand panel) – completely flatline all day. Based on prior observation (four years + and counting) this does not mean we are about to turn as it may lead to a mighty blow off top.

Once again, I’m not going to argue with price BUT – as soon as the diagonal on the spoos gives way I’m ready to dip into some short positions. Until that happens I bite my time as usual and carefully craft my nefarious plans. We are evil speculators after all 😉 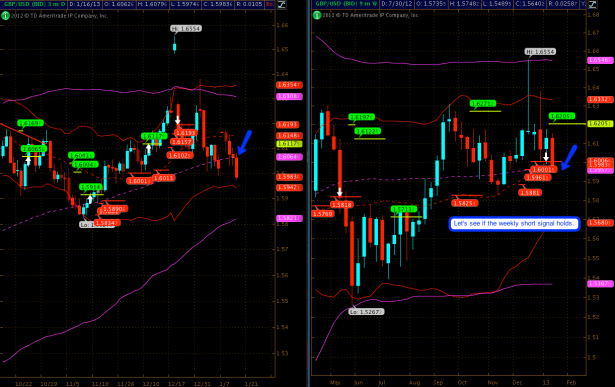 Update on cable – if you were a sub then you probably are short right now. The weekly triple breach (both SMAs and the NLSL) is very positive and let’s see if it holds until Friday at the bell. 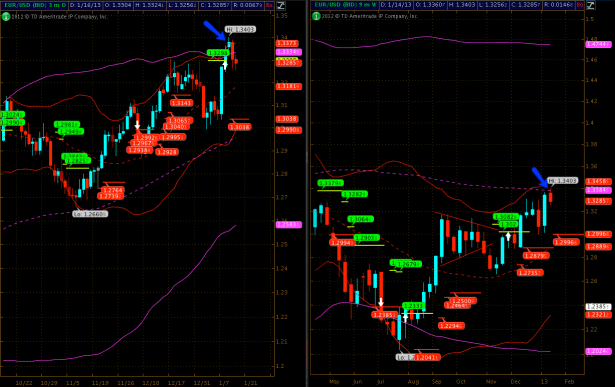 EUR/USD – I was out of commission on Monday and missed to report on the touch of the 100-week SMA. But I want you all to be aware that this pair has hit a weekly resistance level. I would be short on a retest (a.k.a. last kiss goodbye) but of course would be equally happy about a break out in the coming weeks. Just not here in Spain at the ATM – I guess you can empathize… 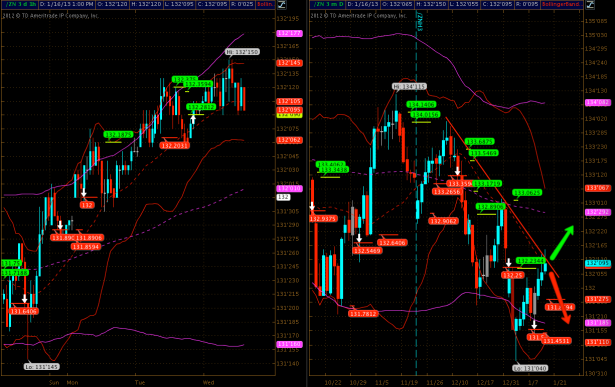 Bonds – the 10-year did observe our diagonal resistance line thus far – despite a little fake out earlier in the session. I’d remain short here with a stop above. The diagonal is falling fast thus we should get resolution in a jiffy. I’d flip for a short if we close above.

We have quite a bit of activity on the commodities and FX side today – so please step into my lair for more setups:
[amprotect=nonmember]
More charts and non-biased commentary below for anyone donning a secret decoder ring. If you are interested in becoming a Gold member then don’t waste time and sign up here. And if you are a Zero or Geronimo subscriber it includes access to all Gold posts, so you actually get double the bang for your buck.
[/amprotect]
[amprotect=1,13,9,12,5]

I’m long wheat with a stop below the 25-hour. Reason of course is the breach of the 25-day SMA (not the 25-hour but it’s better to manage the latter with the former). The big test is ahead of us however as the weekly NLBL is most likely going to put up some resistance. Clearing it would most likely result in a trend change. This is a speculative entry and you can wait for the weekly breach if you like. 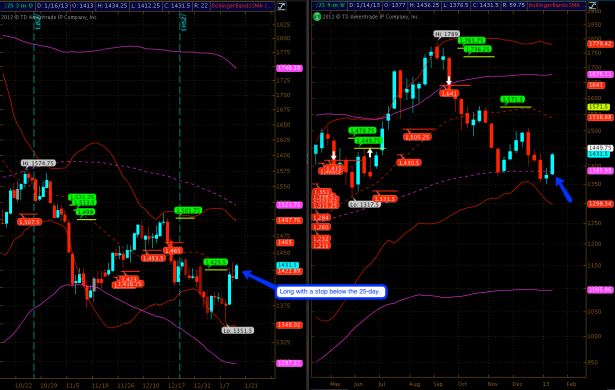 Soybeans – looking pretty positive here on both the daily and weekly. I’m long with a stop below the 25-day SMA. Bear in mind that we had false breaches before so this may happen again. I will probably set a trailing stop and make sure I won’t get lured back below a falling SMA. I’ll be honest – it’s a speculative one and tough to manage right now. But worth a shot with small exposure.

ZB is following the 10-year it seems – thus far it’s own SMA is holding. I’m short as well with a stop above. Similarly we should get resolution here quickly – always appreciated. 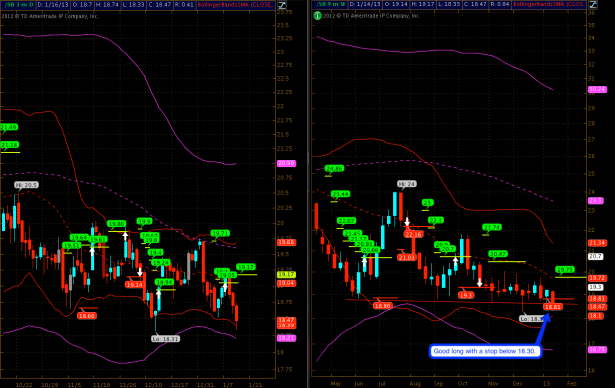 Sugar is dropping into long term support again and I want to be long until the prior low of 18.31 has been taken out. 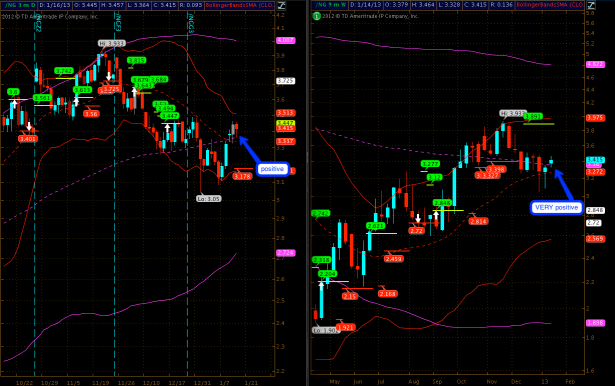 Natgas – breach of both SMAs and it’s holding – it’s also now above both weekly SMAs and that’s very positive. 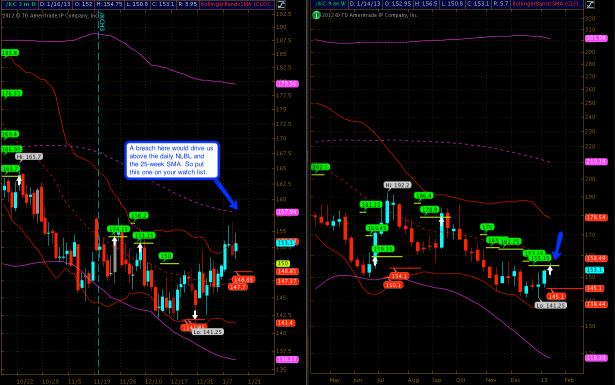 Coffee – a breach of the 100-day would get me into a short position. But as soon as she breaches I would be long as we probably have a confirmed weekly NLBL breach. A bit tricky – I know – but I think it could turn into a runner. 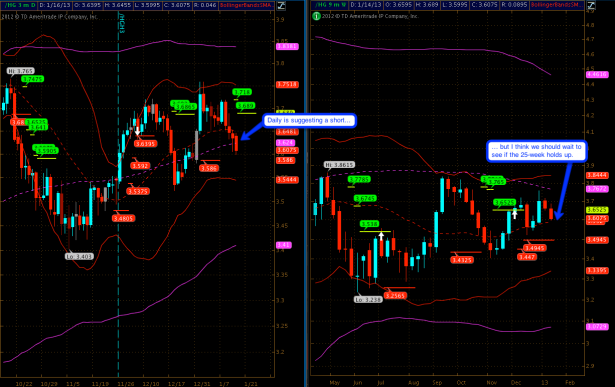 Copper looking bearish – today’s drop through the 100-day would usually put me into a short position. But considering the weekly panel I would wait for a drop below the 25-week SMA. 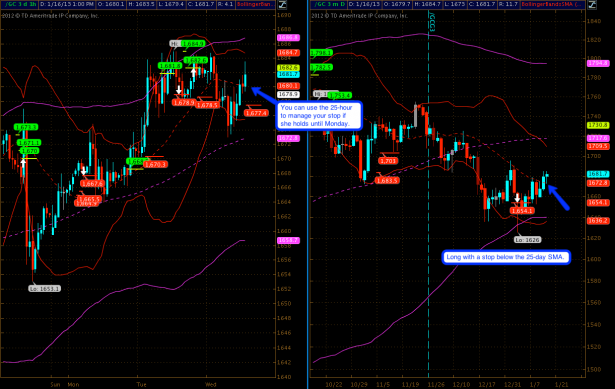 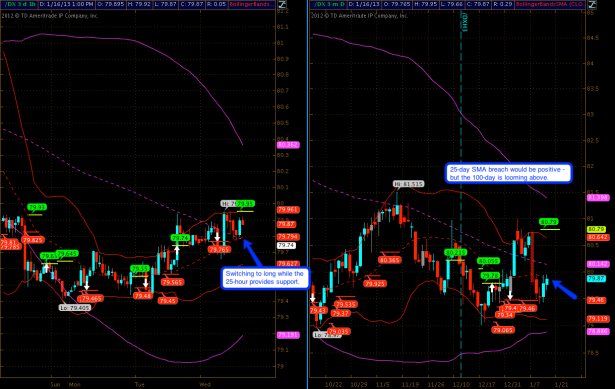 Dollar – I’m now switching to a long position as we retested both short term SMAs. But my stop is below the 25-hour while it provides support. A push above the 25-day would be positive. If we drop back below the ST SMAs I’m slipping back into my original shorts (with suspenders). 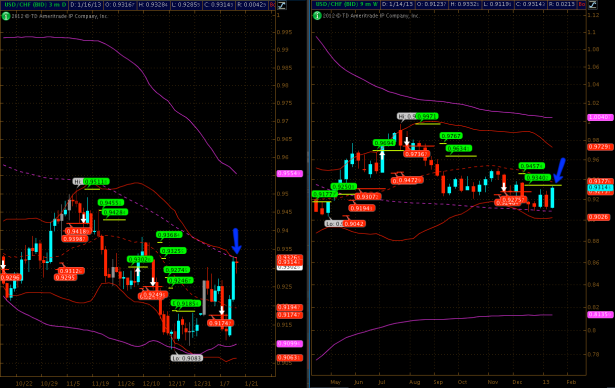 USD/CHF – great short setup here at the dropping 100-day SMA. Mind the weekly NLBL that’s looming right above and which I expect will offer additional resistance.

I have an inkling some lambs are being led to an early slaughter here. The tape will show its cards soon enough and we are accumulating sufficient context. Until then let’s keep it frosty and stick with the setups.