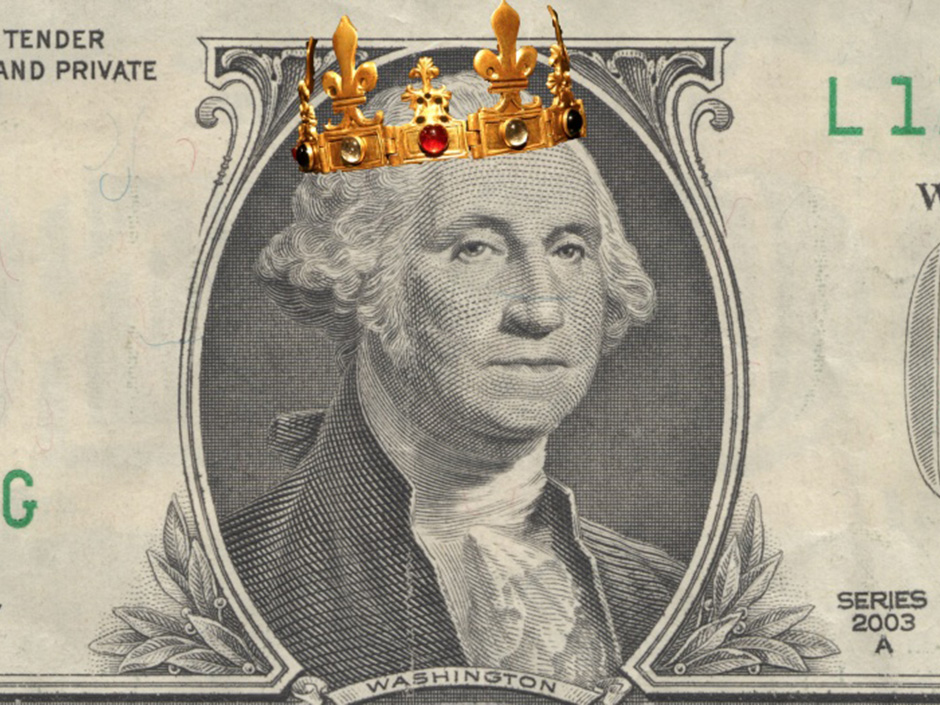 The great trade war of 2018 is officially on after months of increasingly belligerent and often hate filled responses by clearly dumbfounded political leaders over in China as well as the European Union. Frankly I sometimes have to pinch myself in the morning just to make sure that I am not in fact living in a cheesy episode of the Twilight Zone in which common sense and rational thinking have become relicts of the past.

Look folks, this is very very simple, so let me explain the situation in one single paragraph. If you run massive export dependent economies, like let’s say semi-communist China or aging hippy Germany, that largely depend on an equally massive consumer base abroad, like for example the United States of Glorious Asskicking, then demonizing that very consumer base your economy depends on is not exactly a good idea.

In fact after the slew of indignations and petulant responses coming out of Germany in particular over the past few months I myself would not ever buy a single German car again, and I was born over there for crying out loud! No matter what the bureaucrats in Beijing, Brussels, and Berlin may be publicly stating or implying, deep inside they fully know that their are hopelessly outgunned here with zero leverage and potentially horrific long term consequences to their respective industrial bases.

Mark my words, this is going to end in tears with all out dry eyes West of the Atlantic. The Germans and the Chinese in particular are about to screw themselves in a major way with little recourse of ever bouncing back economically in the foreseeable future. What our trade ‘partners’ ought to finally start realizing is that the U.S. economy is ready to kick itself into 5th gear, whilst at the same growing less dependent on foreign exports plus becoming effectively independent of foreign energy imports. I’m not saying that a full scale trade war won’t claim collateral damage on the U.S. side but the long term impact will be felt much more intensely abroad.

Neither the Chinese nor the Europeans can win this one and while I understand the political bind the Chinese are in to some extent, I am almost embarrassed by the amateurish and outright silly attempts of political brinkmanship coming out of Europe. Haven’t they learned anything over the past two years? You cannot bullshit a bullshitter!

Now with most things in life all you need to do in order to get to the truth of the matter is to simply follow the money. That’s all what we do here at Evil Speculator because money talks and bullshit walks.

And while the TV pundits are busy spouting ideological opinion pieces everyone and their grandmother is scrambling for U.S. dollars. This right here is the DX on the brink of a break out attempt. If it succeeds and the daily NetLines near 94.5 can be overcome then a run into 95.5 and higher is almost procedural (barring of course any action by our friends at the U.S. Fed). 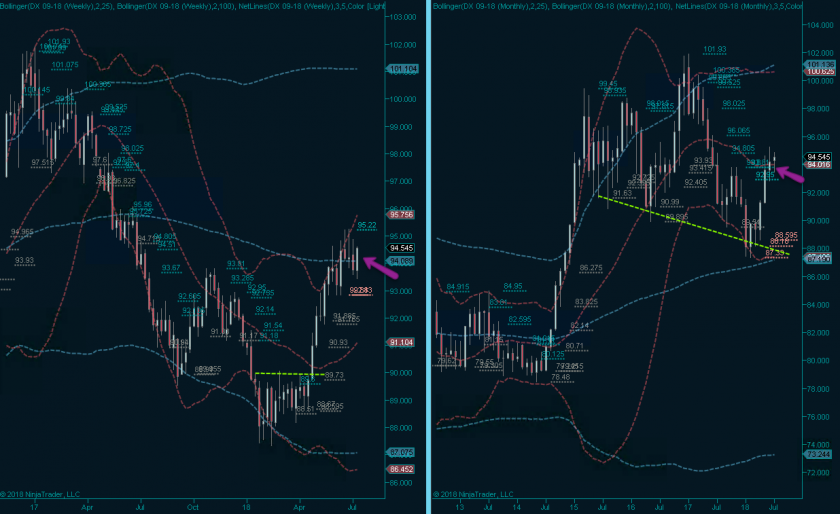 The long term chart shows the Dollar at both a weekly and monthly inflection point near ~94.5. A take down of the Dollar would have to be happen right now as continuation higher establishes the recent correction as a bonafide retest and also a support zone for the foreseeable future. 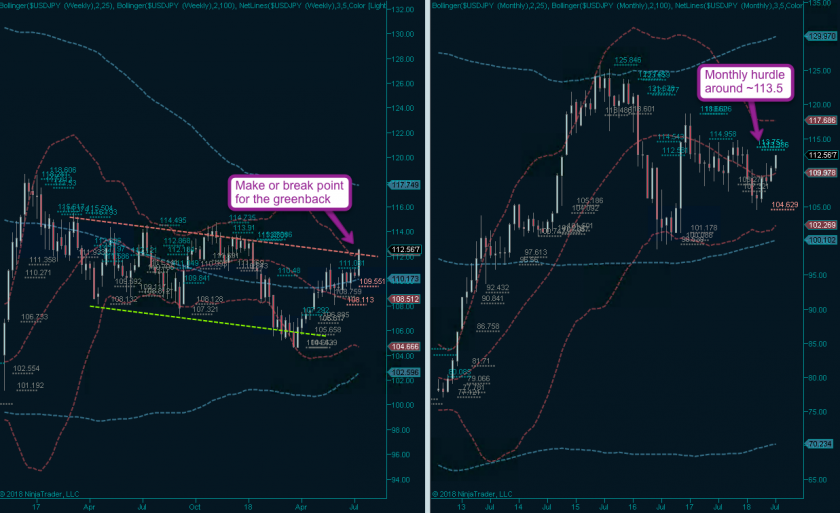 Here’s the USD/JPY which has now arrived at its own inflection point near 112. This represents the upper range of a slightly falling sideways flag which now coming into sync with the upper 100-week Bollinger. Keep in mind that the 100-week SMA has already been thoroughly retested and IMO only central bank intervention here (by the Fed not the BOJ) would throw a monkey wrench into a continuation of this advance. 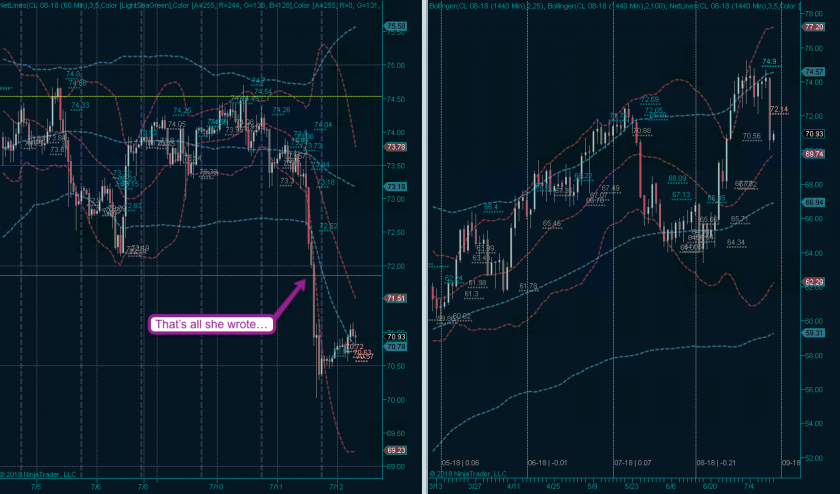 Speaking of collateral damage – crude fell like a rock yesterday which in turn sealed the fate of my long campaign I took out last week. However it’s an entry I would take every single time given a similar break out pattern. You can’t win ’em all but you can try! 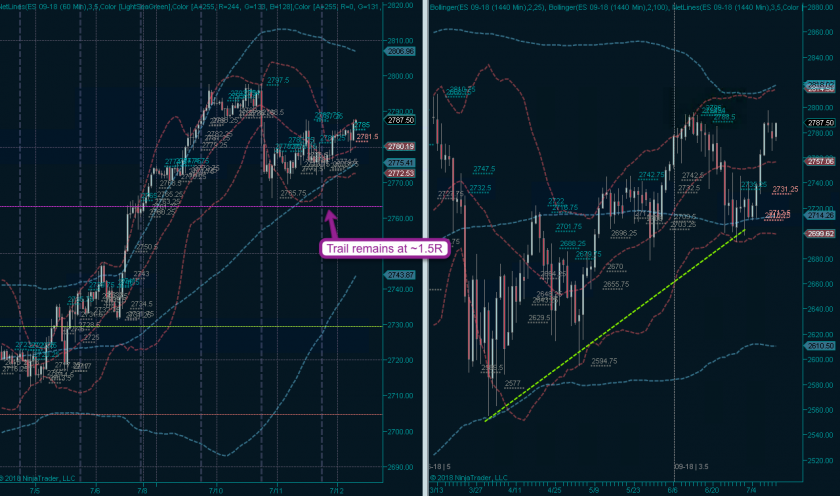 My E-Mini campaign is starting to look a lot better again but thus far there is little to do until we see more decisive follow up to the current crawl higher. The 100-hour SMA is now  > my trailing stop which should act as a first line of defense on another take down attempt.