The overnight spoos pulled a fast one on us by leading the SPX below the 1088 level. Although I definitely consider this progress for the grizzlies and favorable to our long term scenario it may in the short term turn out to be a nasty bear trap. Of course I my suspicion is not completely baseless – the current reading on our Zero chart advises caution and if you are a subscriber you surely know what I am talking about. A lack of participation usually means a big move is in looming ahead – either EOD or overnight – the latter having become a fine tradition in equities as of late.

Let’s take a peek inside: 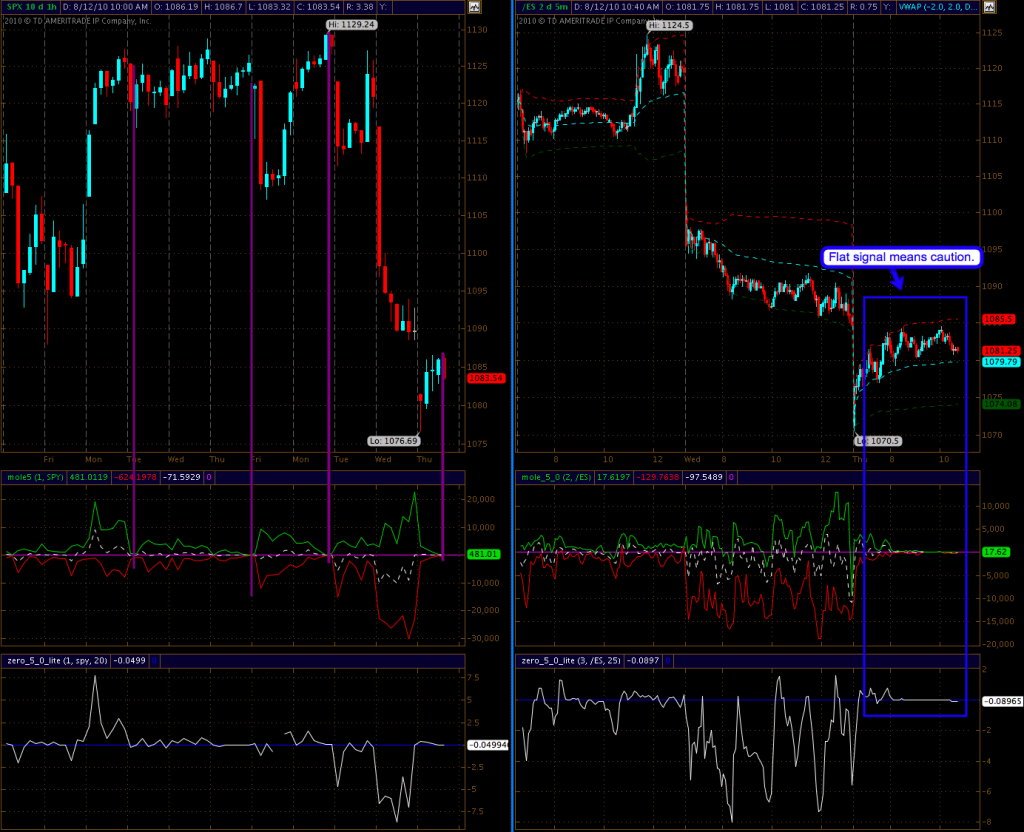 And here’s a snapshot of the current Zero chart. Most subs are used to mostly following the white Zero signals but there is a reason I keep the original Mole oscillator around. Take a look at the purple lines I have drawn which connect squeeze points to price action. Without fail usually a big move ensues and I have little doubt this time will be an exception – especially after such a fast drop to the downside.

The Zero Lite is also gone completely flat which means that major participants are biting their time and probably are getting positioned as cautiously as possible. For us little stainless steel rats this usually means it’s a good time to take profits on short term positions and to be prepared for a possible snapback. Now, that move may be to the downside – we just don’t know yet.

I know that sounds stupid – the tape will either go up or down – thanks Mole! What I’m trying to say is that the next move will be fast in either direction, so please consider than when holding short and long term positions. 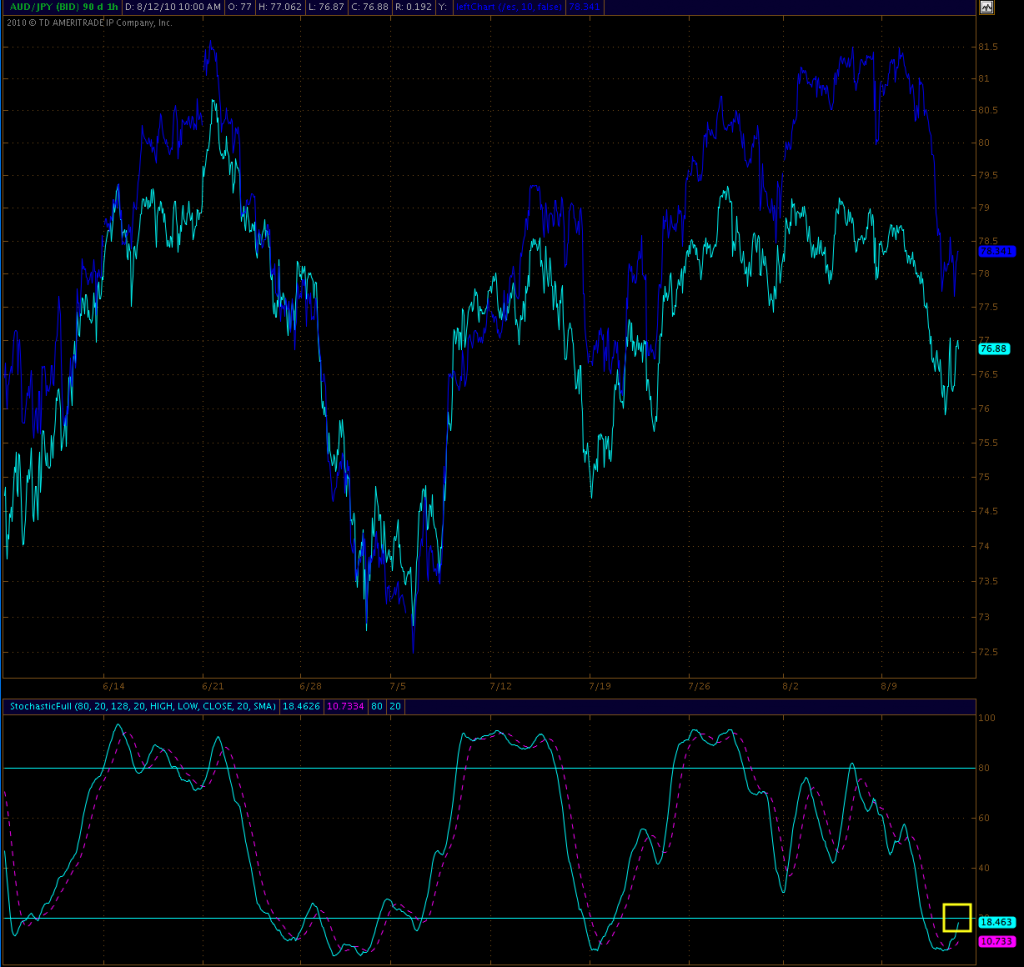 The AUD/JPY chart is also a bit concerning on a short term basis. It’s possible that we may see a push back on that currency pair which most likely will favor equities (which recently have started to ignore the downside but are leveraging any upside in the AUD/JPY). 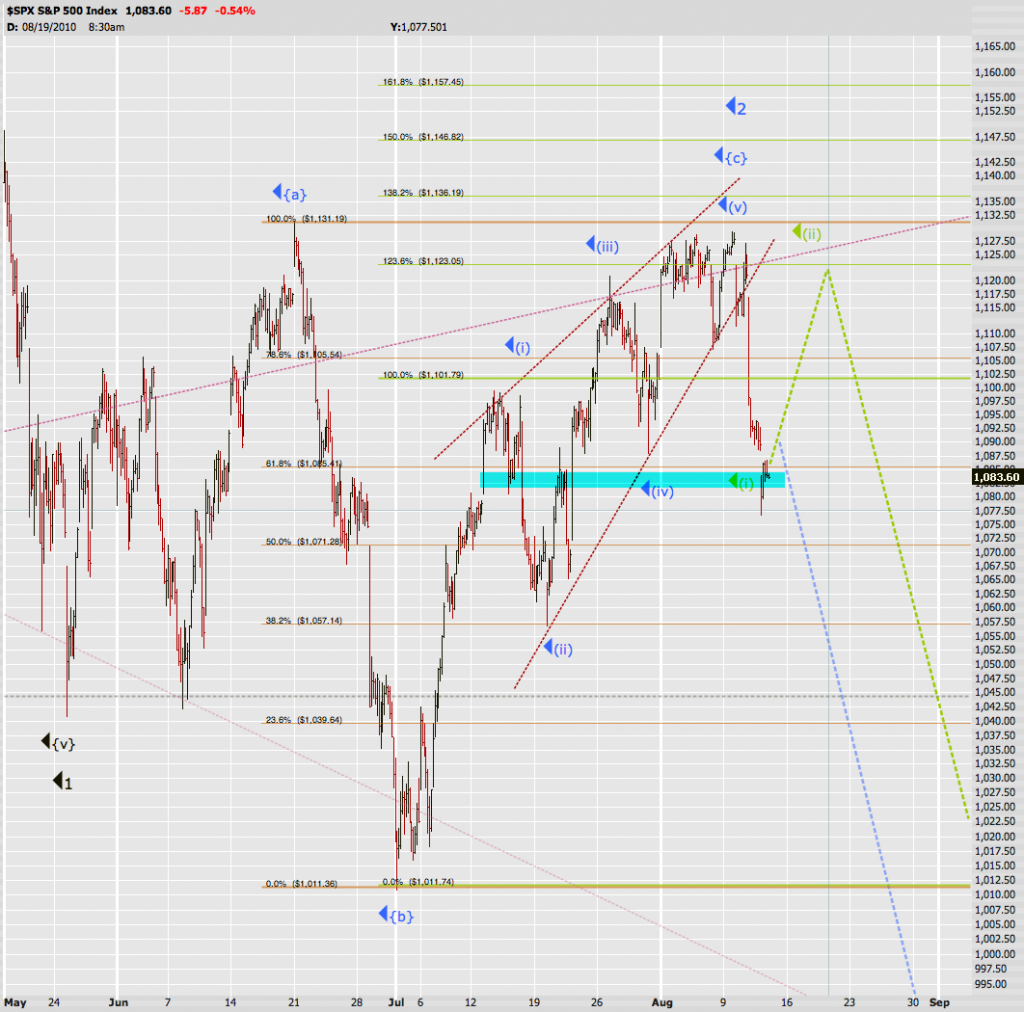 The wave count hasn’t changed materially. If the bulls manage to get out of the gate we could see some pretty fast candles to the upside in an attempt to shake out some weak hands – it rarely fails. You may be surprised that the blue scenario is still considered the less preferred scenario and it’s not due to a lack of confidence regarding the long term trend. I just don’t think that it’s straight down today/tomorrow especially based on what I’m seeing on the Zero right now. This may change by the end of the day and I will chime in here if it happens.

However, the potential is there and we need to be positioned on a long term basis. Yes, we may get that spike up but if we don’t then you will find yourself looking for rips a lot further down then you may anticipate right now. When it’ll break it’ll happen very fast. There is no way of timing this – if you try you will most likely be left behind. Best course of action I can offer is to do nothing – just let ‘er rip and if it does add short positions. Sometimes it’s best to simply do nothing and let things play out until the market tells you that you were wrong.

The real risk right now, my dear stainless steel rats, is not to the upside.

A Little Favor To Mole

The past few months have been taxing on many levels. I don’t have to tell you that those endless gyrations can take it out of even the staunchest traders. The recipe to make it through intact and without losing my nerves was to slow down and to stop anticipating – I simply did what the tape told me. I know that sounds simplistic but instead of trying to lead the market I was trying to simply follow it – which was a bit of a psychological shift for me. But it saved my butt and I’m a lot more settled and focused now than I was maybe six months ago.

However, there is a bit of double meaning in today’s headline. I have to admit that the lack in participation in the comment section in the past few months is slowly getting to me. Some long timers have been MIA for a while now (where is the chicken?) and I see less and less traffic here which cannot just be attributed to a summer slow down. Which confuses me a little bit – this is probably the most exciting setup the bears have found themselves in for a long time and it seems to me that everyone has walked away.

I have tried very hard to not let it affect the quality of my work, but just as an example: Last Sunday I spent literally six hours of my afternoon putting my post together – admittedly it took me a bit longer before I found my groove and settled on a theme for this week. When I checked the blog before going to bed I only saw a dozen comments, which was a bit disappointing as in the past there would have been dozens.

I have been pretty determined to slug out any slow down during the summer but I have to tell you that I’m starting to slowly feel the burn. I think that I have managed to maintain a pretty high quality blog throughout some of the worst tape this market has thrown at us. You all know that blogging is a two way street – if you all walk away and simply enjoy the receiving end I doubt that I will be able to keep things up. After all, I am not doing this for the money – quite frankly, the subscriptions are pretty cheap as you know and they barely pay for the time I put in here. Just yesterday I spent 30 minutes resolving a PayPal case about a guy who signed up out of Nigeria. He turned out to be legit and he was very apologetic, but it was 30 minutes of my day I could not focus on trading, blogging, and the two other business I am running right now (which I don’t talk about here, so many of you may not be aware of that).

So, the message here is this: If you enjoy this blog and if you find value here, then please try to participate, even if you’re a noob – you must be trading something. I very much feed off the energy of the people who post here even if I don’t always respond (as I’m busy). I can understand that the blog gets quiet during boring tape or if things are frustrating. But just last week I threw out a dozen symbols or so – and almost all of them went exactly the way I had proposed and would have been profitable. Nevertheless there is literally no mentioning of any of them in the comment section. So if I can’t get input on trades that turn out to be winners what is my incentive to keep posting symbols? Again, I don’t do it for the subscription money – even a few dozen subs at 29 bucks don’t make you rich 😉

Alright, I’m done complaining – I have bitten my tongue for a while as I don’t want this place to be a downer and promise that I won’t keep wining about this. But many of you had an opportunity to take vacations and recharge your batteries in the past few weeks – I decided to keep the blog running. Nothing would energize me more than seeing Evil Speculator again be the rich and energized community it once was – and now is the time.

Please take a look and compare them with today’s charts.