Line in the Sand

by The MoleAugust 25, 2008
What a difference one weekend can make. Friday turned into a major bear squeeze and anyone getting scared out their short positions probably kicked themselves by about lunch time today as the tape painted a complete u-turn on all averages, the S&P even dropping as much as to returning all gains since last Wednesday. 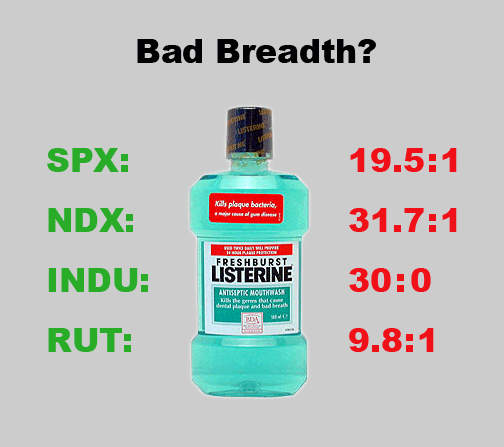 As expected the market suffered from pretty foul breadth today, as no amount of Listerine was able to wash away the stench of a complete lack of buying interest (see ratios above). What’s interesting and a bit encouraging is that the NDX was leading the pack with a 31.7:1 decl/adv ratio today; and the Dow was completely flat-lining with not a single of its thirty stocks in the black. 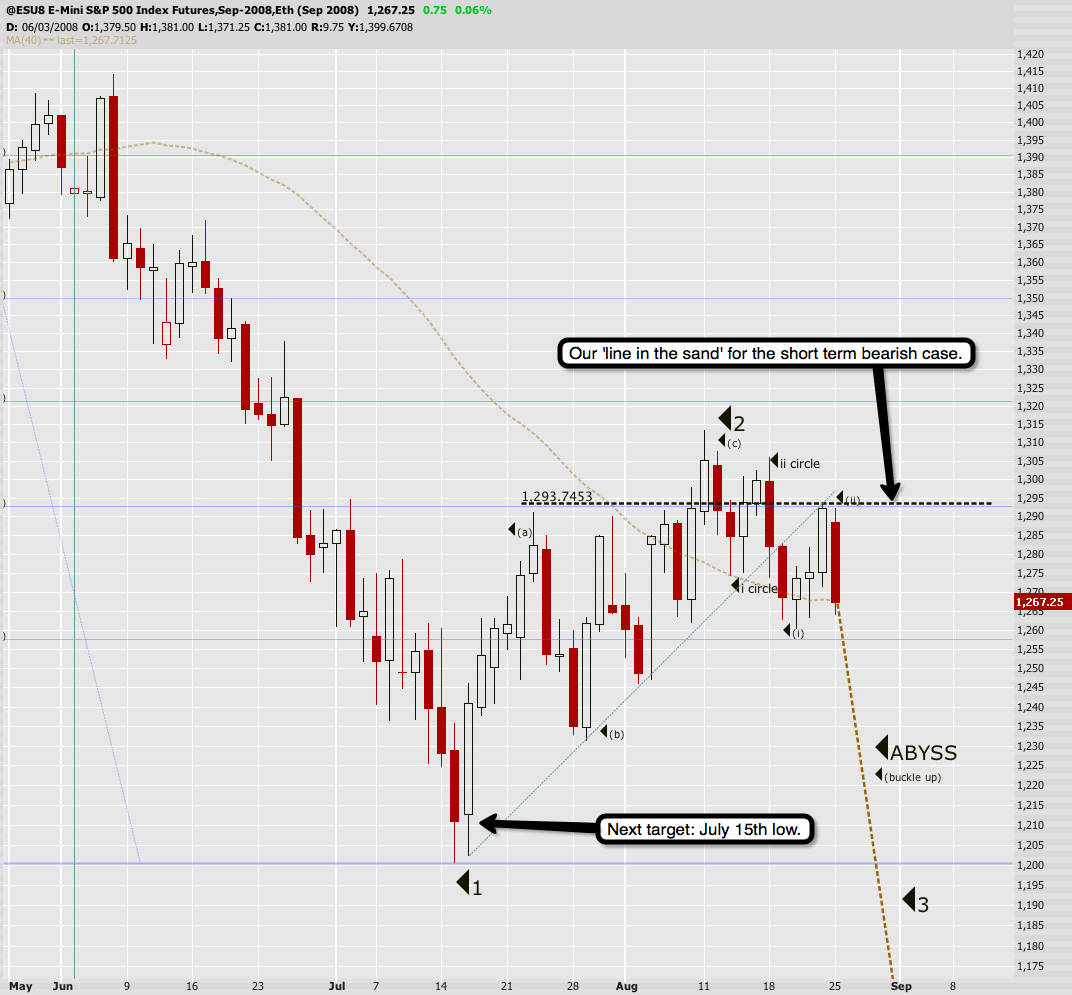 A line in the sand has been drawn.

Let’s focus on the S&P tonight, as it’s painting an almost perfect short term Elliot Wave pattern and since it  tells the story for the other main indexes. The S&P futures chart above shows us that a ‘line in the sand’ for the bearish case has emerged around the 1294 area. For the $INDU that line hovers around 11,625 and for the $COMPQ it traces the area around 2,415. Should we push back up in the coming days and challenge or perhaps even breach this line, it would greatly diminish our chances that this is our wave 3 of 3 scenario. Implicitly this would also mean that we would most likely push up higher and re-test 1320 or even 1350 on the SPX again. 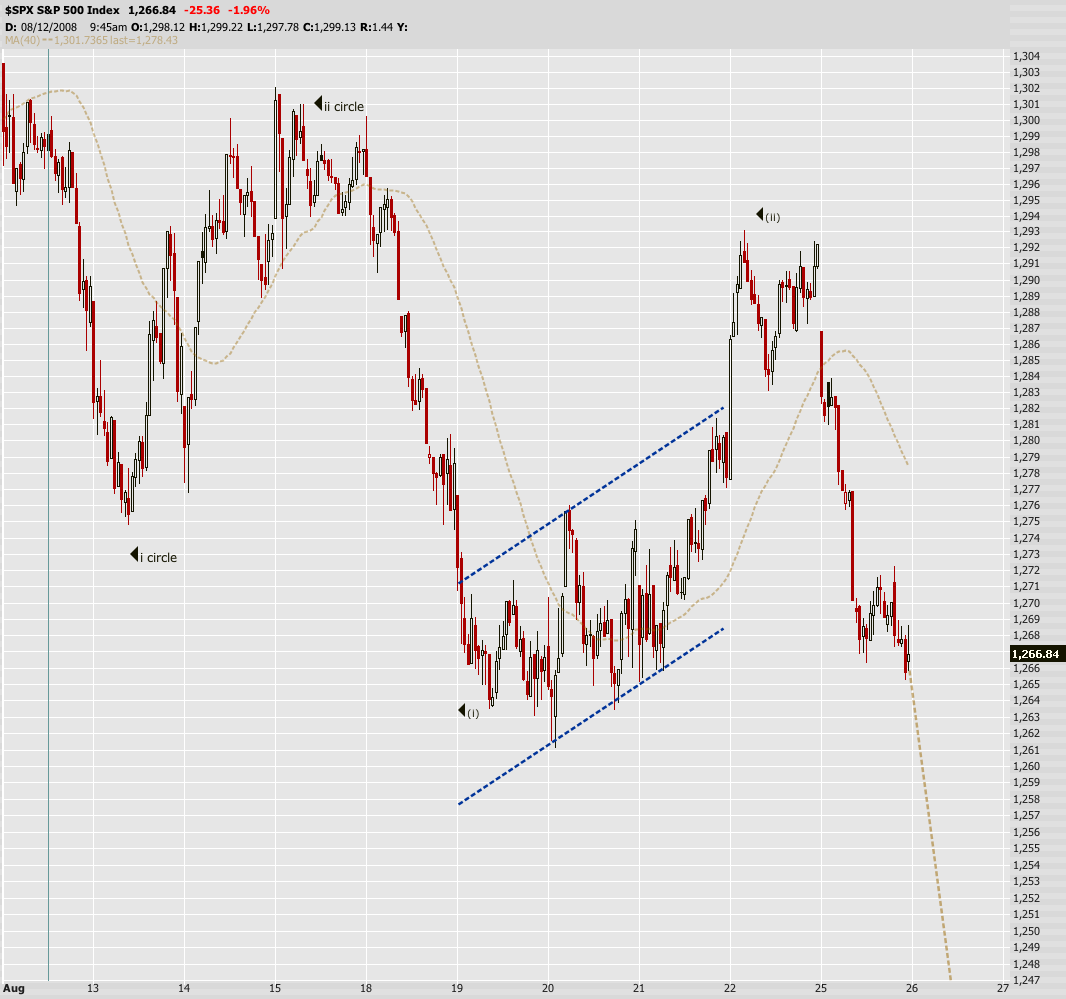 SPX in the process of painting a clean EW motive wave.

However, today’s tape made no single attempt at challenging that resistance line and immediately proceeded to the ground floor via the express elevator. I was previously mentioning how the S&P traced out an almost perfect Elliot Wave today: Looking at the chart above its a rare occasion to see the SPX paint an almost perfect motive wave; only to be interrupted from completing its 5th down by the closing bell (how rude – how about some overtime?). We usually don’t see such clarity at such short time intervals and that alone gives additional credence to where we are heading, which is down. In any case, the inability to continue Fridays challenge of our support line makes a strong case for a continued bearish trend and we expect to soon revisit the prior July 15 lows on all averages. 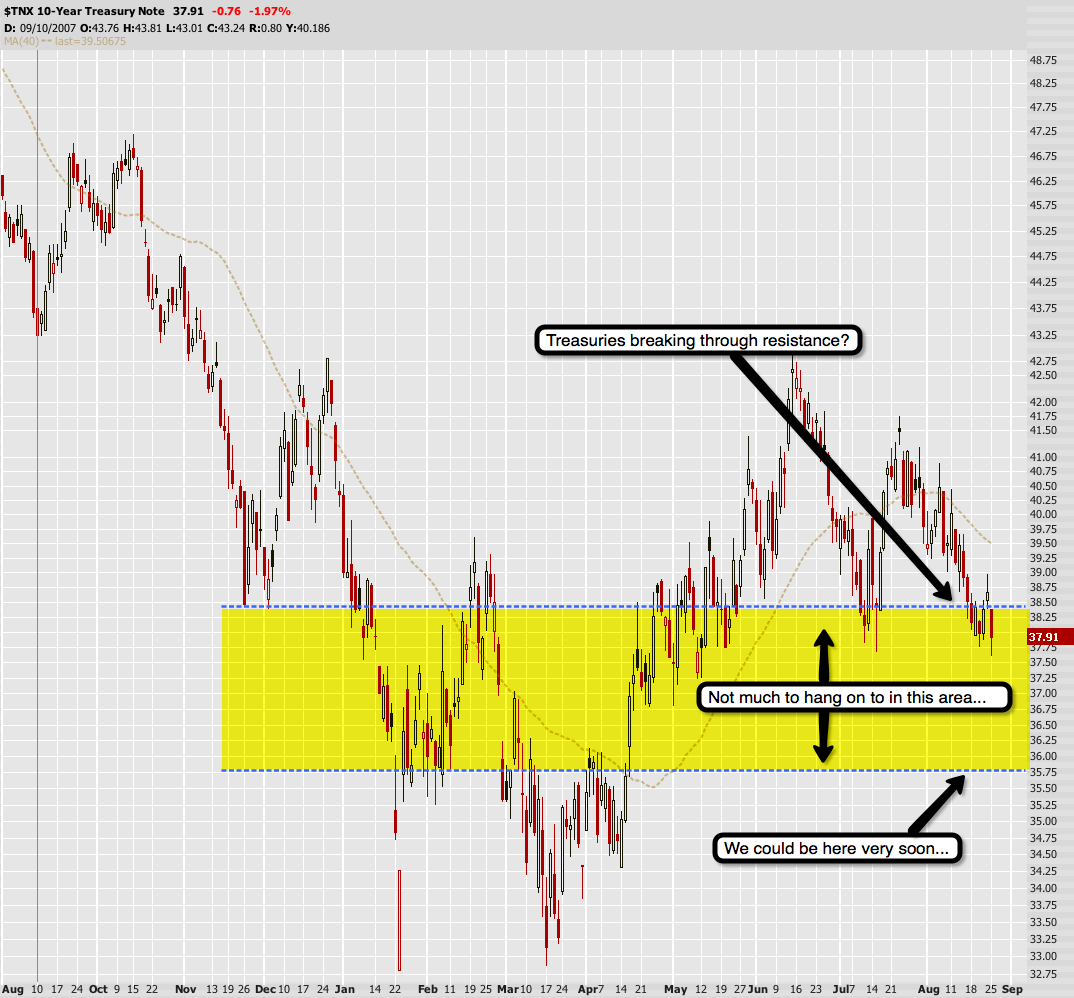 But it wasn’t just the equities that took a heavy beating today – almost everything was going South today: Sweet crude and Gold were both down as were the 10-year Treasuries yields, falling to 3.79%, matching levels from early May and July. Despite the headlines in the news indicating that the equities managed to drag down the treasuries today, it was actually the other way around, as the early morning action in the treasuries gave us an inkling of were the rest of the market would be heading today. In that context I came across the following quote today on Bloomberg:

“I’m bullish on Treasuries now because of the economic situation,” said Hiroyuki Bando, chief manager for fixed income, equities and currencies in Tokyo at Mitsubishi UFJ Trust & Banking Corp., part of Japan’s biggest bank. “The housing market is sluggish and the financial institutions in the U.S. have many, many problems. There is no fuel for the economy.”

Bando-san is spot on with his analysis – as the market is extremely cash starved right now. But what’s even more important is that the treasuries are hanging by a thread, as apparent form the chart above. We are in the process of dropping through an important resistance zone and our next stop should be somewhere around 35.75 – there’s not much to hold them up unless banks suddenly start lending again. If today is any indication as to the correlation between the treasuries and the equities market, this adds another piece to the puzzle for both our short and long term bearish outlook. 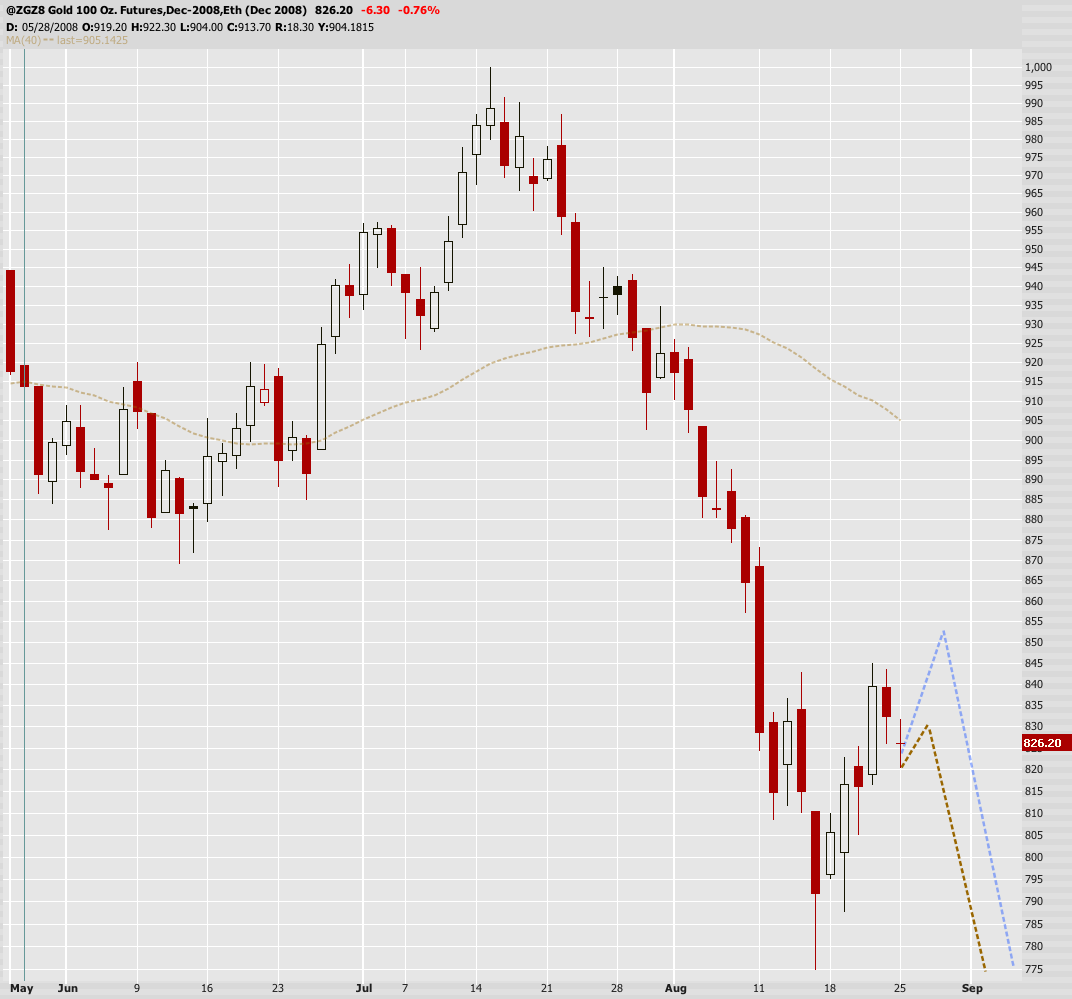 Gold bugs at the beach this week.

It wasn’t a big surprise to us that Gold didn’t move much in either direction, although those folks over in the ‘market/gold correlation camp’ have to explain to me why Gold was down while the market took a beating. Those poor Gold bugs who I (almost) pity, are currently consoling themselves by rationalizing the action of the last few days as ‘base building’. However, I expect a push towards the 855 level to soon put an end to this consolidation period, followed promptly by another rapid drop back down to below 800 and then some. I think we should call this period in Gold as its ‘Rodney Dangerfield Phase’ as the precious metal ‘just can’t get no respect’. It’s even possible that we might see an immediate drop from right here – I would give both scenarios a 50/50 chance right now.

The only regret Berk and I have about last Friday is that we didn’t load up on even more index puts when the markets started topping out. Today, those puts were paying us handsomely as we had loaded up on FOTM options which are now accruing negative delta on the double. That makes exactly the point I have been driving at all last week: Forget about day trading at this point – yes, the market is still whippy – but this is not the time to focus on short term gains. This is the time to leverage bullish retracements as buying opportunities for strongly defensible short positions. Those puts we bought on Friday have stops sitting above that mighty ‘line in the sand’ – if we breach that one the jig is up anyway. But unless this happens we’re sitting on some mighty strong resistance here. Shame on you if you did not take advantage of that – it took a bit of courage – I give you that; but in the end everyone following our postings should have been very familiar with that long standing vertical resistance/support line and should have recognized the apparent inability of the market to breach it. I think even Jeff Kohler over at OA and Tim Knight on the Slope of Hope have had postings to that effect.

The market will always do its best to scare you out of even your best positions. That’s where a solid trading system comes in, something that Jeff over at OA has put a lot of work into conveying to his community. We won’t try to emulate his example and would like to refer to his blog for excellent insights on how to structure your trades and to pick entry/exit signals which are defensible and have the highest probability to bank some coin. Our approach may be more long term, but the general idea is the same.

Finally, the economic calendar this week is packed – we have a bunch of market reports coming out, at least one every day this week. One that keeps me awake at night are the FOMC minutes – it seems no matter how bad the news are the Feds are always good for at least 150 points on the Dow. Whatever happens – I suggest to keep cool and use the occasional spike up to ‘build your case’.

Cheers – and may the market have mercy on your account tomorrow.