Lines In The Sand

I was looking at my charts tonight and felt the needs to spell out some important ‘must not go zones’ for the next few trading days: 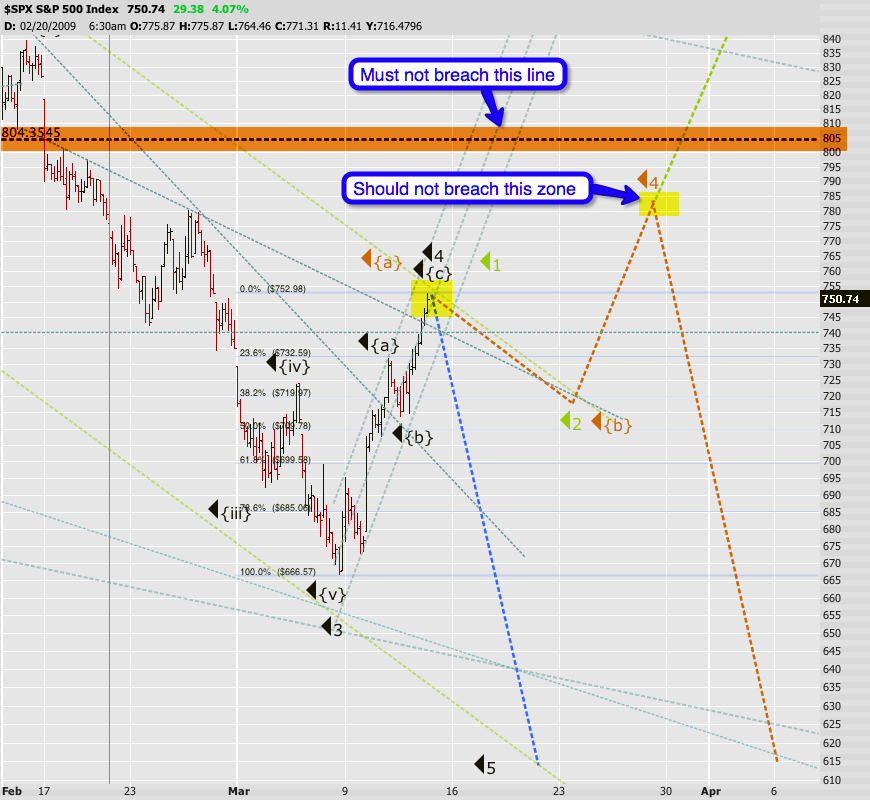 Looking at the wave pattern which started on March 6th it’s pretty obvious that we could easily count this as a motive wave. So, at this point we have three possible scenarios:

Green: We completed Minor 5 of Intermediate (5) and thus Primary {1} on March 6th. We also completed, or are close to completing Minor 1 of Intermediate (A) of Primary {2}. We will also descend into 710 but to complete 2 of (A), which will be followed by a monster rally into 3 of (A). There is a faint possibility that we don’t even drop from here and directly proceed upwards and not stop until we touch 780, but based on what I’m seeing in my momentum indicators I do not give this scenario a lot of credence.

In terms of probabilities I would probably give Blue 40%, Orange 40%, and Green 20% as of tonight. Of course as the tape unfolds I will follow up with updates – unfortunately there is no scenario that I would give a clear preference (50% or higher) at this point.

There you have it rats – Mrs. Evil has been waiting with dinner for 30 minutes now and it’s probably already cold. But based on the comments I received tonight (some of them a bit emotional) I needed to make sure you rats are up to speed.

I personally will play it very small going forward until we either see a clear sign that we drop from here or that we are nearing the point of no return.