In the US, there are a record 6.1 mm workers who have been unemployed for more than 26 weeks – and more importantly, still WANT a job. Another million have given up and are no longer counted in the labour force. Eurozone unemployment has reached 10% – I don’t know how the data is “adjusted” but I would assume that this is a minimum. This is the worst in percentage terms since August 1998 (15.7 mm counted without jobs). Consumer credit dropped another $17.5 bb. It seems it is better to pay down debt that buy more crap. Who knew? (besides us, I mean).

The Governator is trying to extort $7 bb from the .gov by thretening to shut welfare programs and slashing the pay of 200K employees. California is facing a $20 bb deficit over the next 18 months. The .gov is trying to back-door a way to get all the 401(K)s and IRAs to be used to fund Treasury and .gov deficit spending. Seems that that mountain of money on the sidelines is an illusion. If 0% yields won’t push it into the stock market, what will?

Oddly enough, Chinese exports climbed 17.7% last month YoY. Imports are up 55.9% . Remember that China implemented a $586 bb .gov stimulus program mean to lift exports and consumption among Chinese consumers.  Chinese Bank credit expanded $1,000 billion in the first half of 2009.If you give it, they will spend. So why is this lifting exports? Sales tax receipts are down around the world. Could it be that China is taking greater and greater market share in foreign markets? That would be an interesting idea to investigate. At the same time China has raised short term interest rates. They have one foot on the accelerator and the other on the brake. SPX daily has closed above the point of “NO return for the bears” which is delineated by a TD risk level (short purple dashed line). Just going past this does not “guarantee” a continued upward trend. SPX needs to open higher on Monday and close higher still for the trend up to remain valid.  Of course, the China import /export news will likely put a bid under ES overnight.

TD Pressure is showing oversold – but with no indication of the move down that would provide a low risk SELL. If the trend continues based on momentum – meaning that it will retrace rather that continuing straight up – then there are likely 4 more days before there is a TD “reflex” sell-off once bar 9 of 9 on the current SELL setup is completed (green numbers). 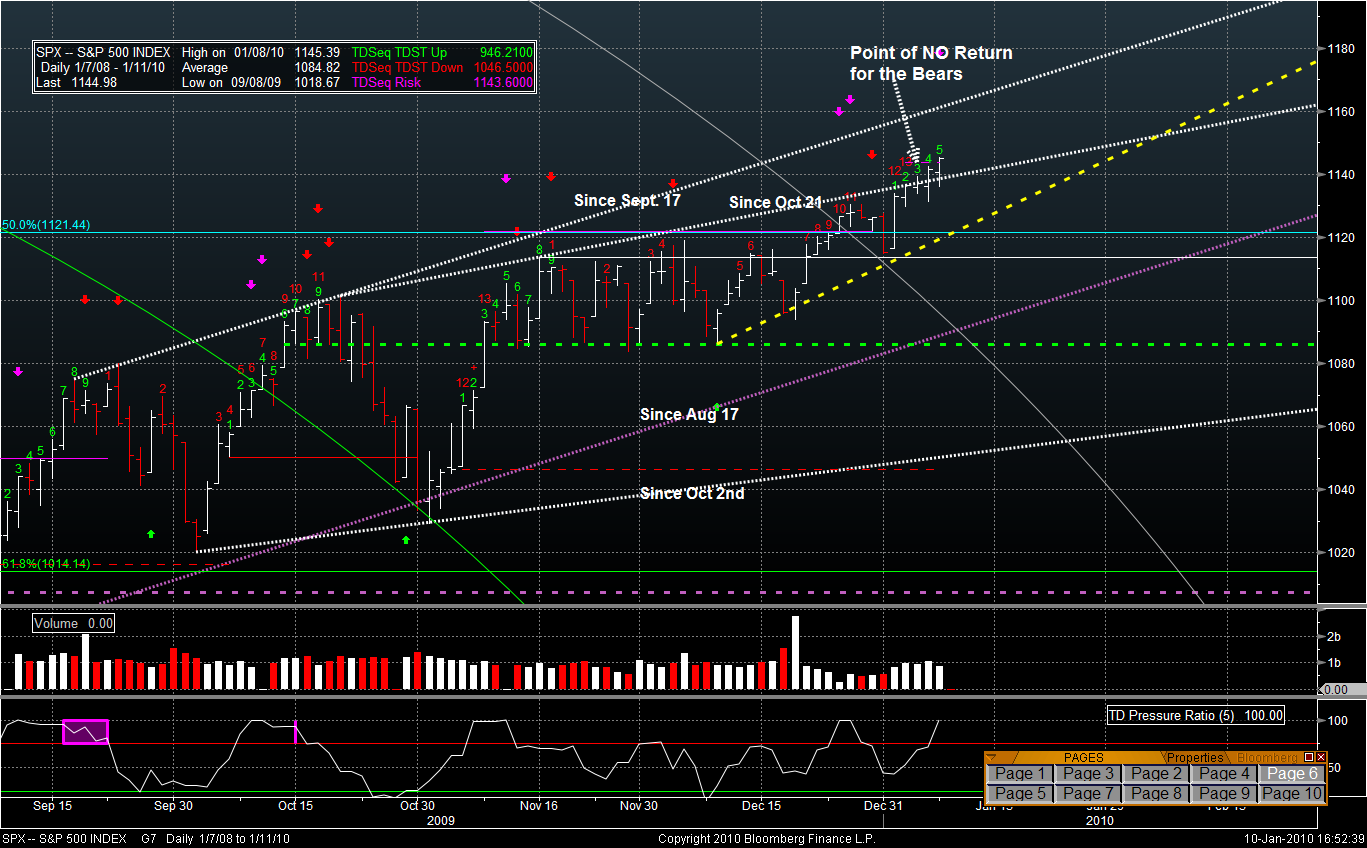 I’m on Bloomberg anywhere and limited by what I can save from Bloomberg, so the usual pie charts and DAX graph are unavailable. Suffice to say that the world is green, DAX gapped up to a new high but is fading back to the open level (whether or not there will be a gap fill is the main question). DAX is a precursor for SPX, usually.  Not all sectors are green, however. Financials – usually the leaders – are lagging today, as is Materials. The strongest sectors are Consumer Staples and Utilities – usually more risk-averse choices.

ES moved up on Sunday night, initially, and then has trended sideways. If there is a  gap up at open for SPX, it will be a small one. There is no data today, so any reindeer games will have to key off of news and innuendo. The big news is all about China export and import growth. The big question is who is buying, and for what? This applies to their exports as well as imports. ES Pivots: 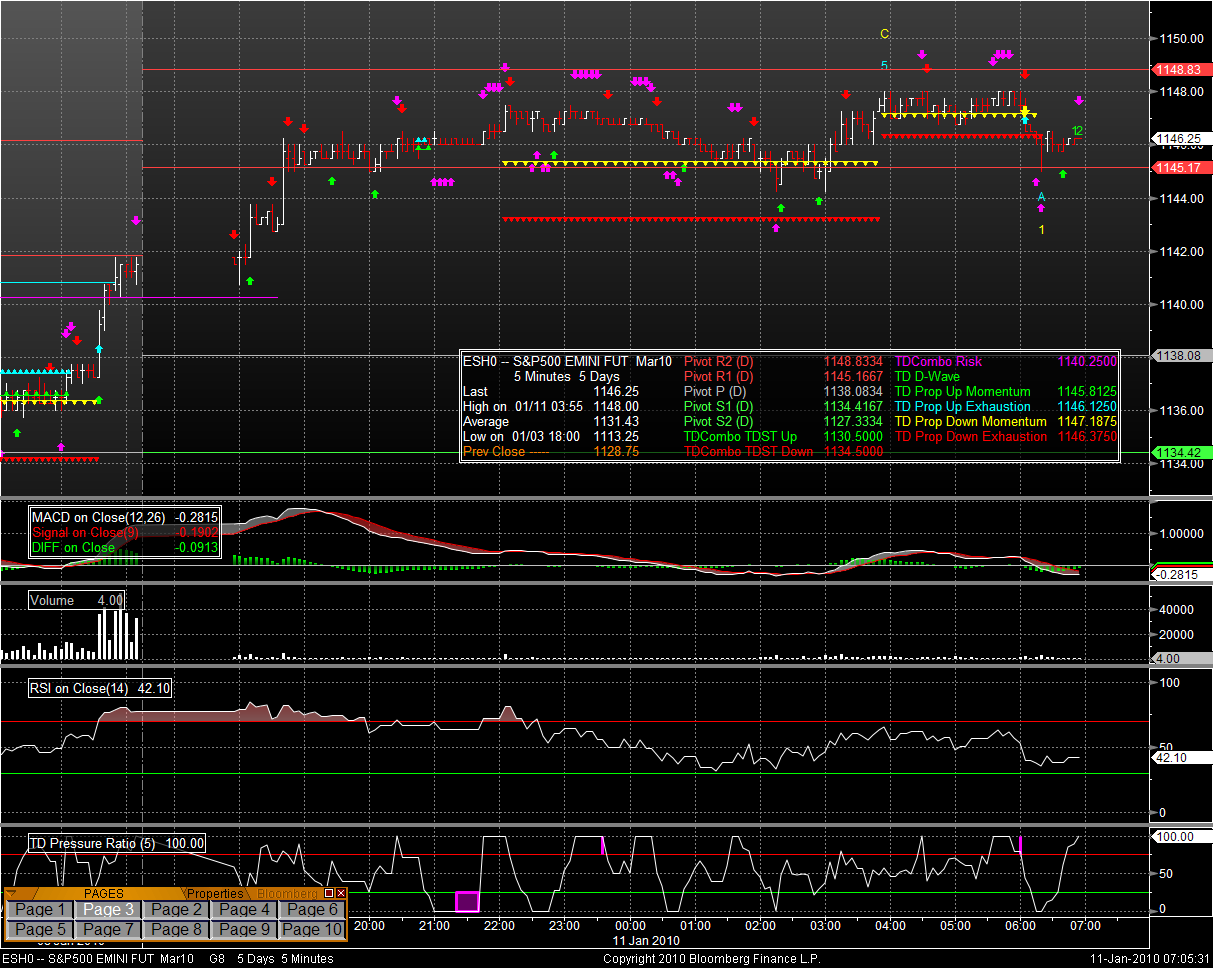 The USD slipped off of the 23.8% FIB that it has been dancing on for the last month. All of the TD TA says that DXY should be headed up here. Of course, this doesn’t matter if there is less USD /SPX inverse correlation. 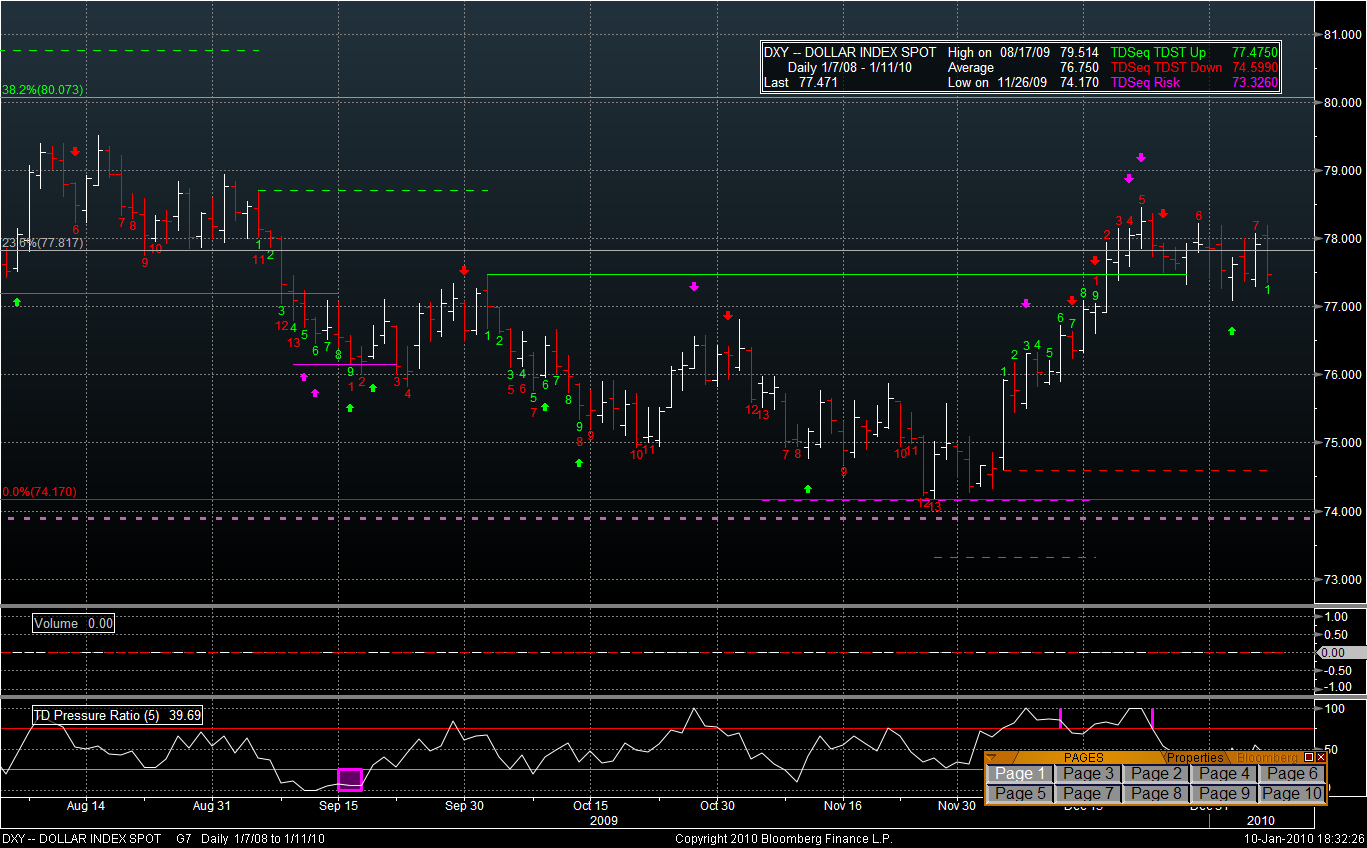 The USD is weaker. CAD, JPY, EUR, GBP are all stronger. Looks like the carry trade is back with a vengeance. I hear that there are sell stops on EUR around  1.4540 / 1.4550 – just ahead of significant barrier option interest.

DXY is fading off of the FI this morning.  Below 76.60 and a likely retreat all the way to the 74.60 level is likely. The only saving grace is that the inverse correlation to SPX is not always apparent, these days.

I’m sitting on my hands. Unless I am willing to go long and swim with the current – there is no point in struggling and exhausting my resources.