December has arrived and once again it is time to revisit our long term charts. The fastest moving sector by far are equities which managed to stage a rather impressive reversal off their mid November lows: 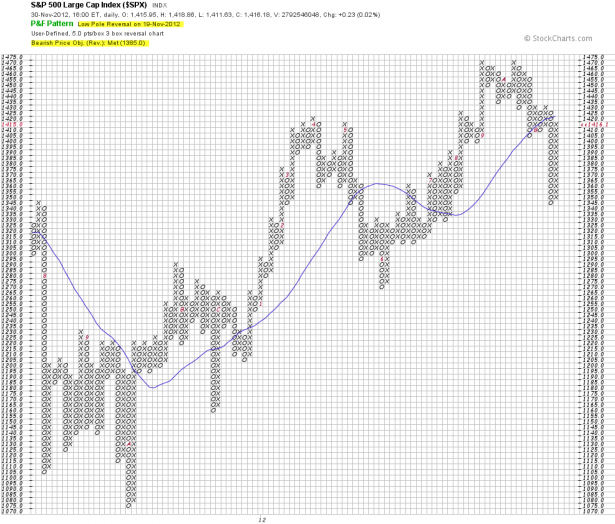 The point & figure chart expresses the velocity of the November drop & pop rather well. At this point the bulls have a lot going for themselves, let’s review: For starters the SPX satisfied the bearish price objective and then some. This was followed by a merciless short squeeze which two weeks ago triggered a low pole reversal warning. That pretty much put the bearish case on notice but there was still hope for the grizzlies until 1400 was reconquered during a low volume Thanksgiving Friday. 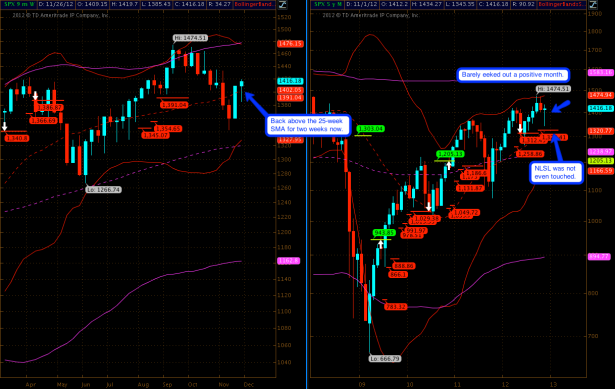 Although I have short term reservations (see my Friday update regarding a possible short term shake out on the horizon) the long term picture is looking pretty positive right now. On the weekly panel we completed our second week above the 25-hour SMA. On the monthly the bulls managed to finish November in the plus – but just barely. 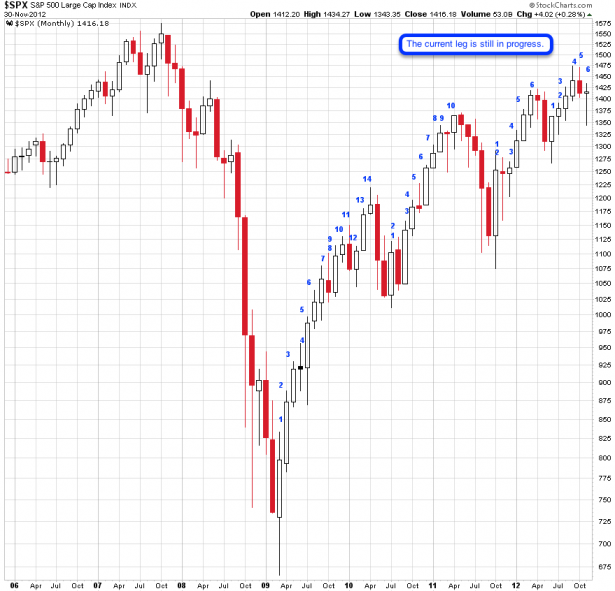 This however slightly changes my 2009 – 2012 bull market chart as the new count only leaves October as a monthly lower close. And that means the current leg of the long term uptrend has now completed its sixth candle. I am yet unsure about the implications and I reserve final judgement until I see how much follow through we get after Christmas. 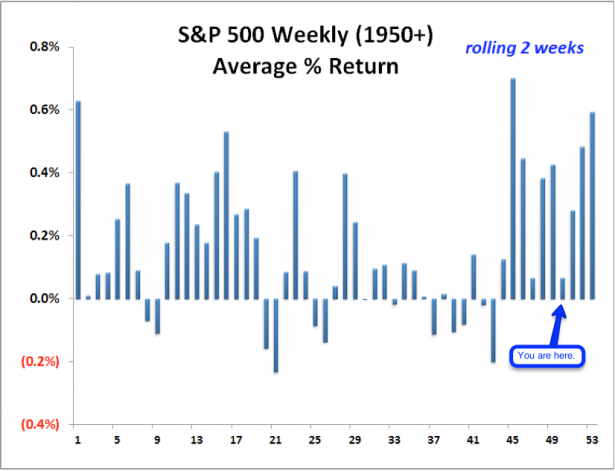 Seasonally we are now heading into week 49, a.k.a. as the ‘pre-Santa-Rally-shake-out’. Based on what I saw on the volatility front I expect a bit of a pull back before we dash off into the final weeks of the year, which obviously are traditionally very bullish. 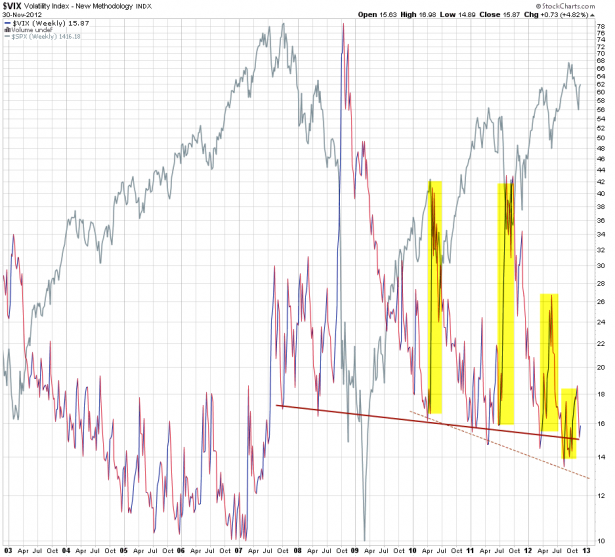 Something that has puzzled me a bit during the recent shake out was the complete lack of volatility. Complacency among investors appears to have returned to pre-crash territory. Astonishingly we never even closed above VIX 20 and the overall consensus among equity bulls seems to be that Fed has their backs, no matter what. Admittedly the sell off only lasted for about 130 handles but the utter lack in response on the volatility side is a bit concerning. I have made this point before – a market without bears is a very dangerous environment to be bullish in. For when things hit a snag there is nobody in between to soften your fall. Black swan events don’t happen when everyone is worried – they strike when everyone has forgotten about them. Curiosity may kill the cat but complacency is what does the bull in every time.
[amprotect=nonmember] More charts and non-biased commentary below for anyone donning a secret decoder ring. If you are interested in becoming a Gold member then don’t waste time and sign up here. And if you are a Zero or Geronimo subscriber it includes access to all Gold posts, so you actually get double the bang for your buck.
[/amprotect] [amprotect=1,13,9,12,5] 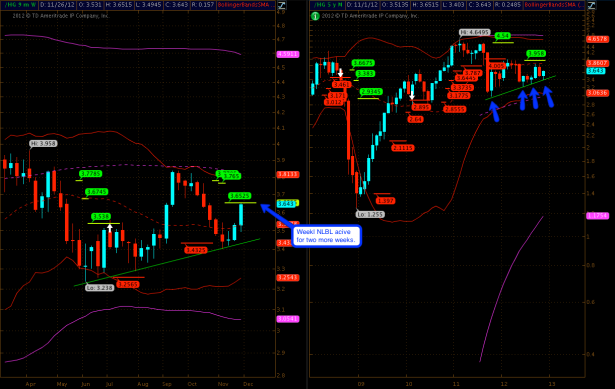 Copper continued a sideways consolidation that began late last year. I think LT diagonal support is well established at this point. On the weekly front it is now facing a NLBL which will decide whether or not we revisit that diagonal or head higher toward the 100-week and 25-week SMAs.

The point & figure also suggests resistance overhead so I don’t think this will go over easy. I would be surprised to see a clean breach of the weekly SMA and expect things to remain a bit bumpy here for at least another month or two. 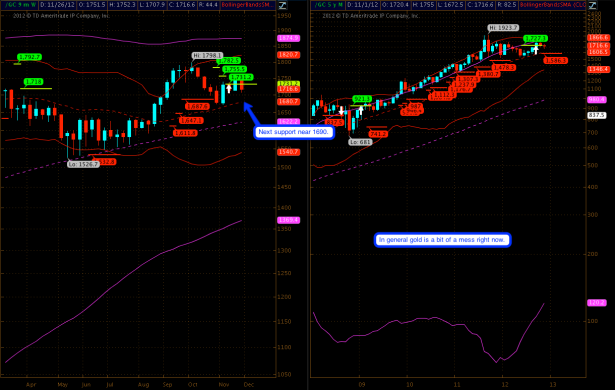 Gold has had its moments recently but on a long term front it remains to be a bit of a mess. Just looking at the LT panel I would surmise that the current trend remains bullish. 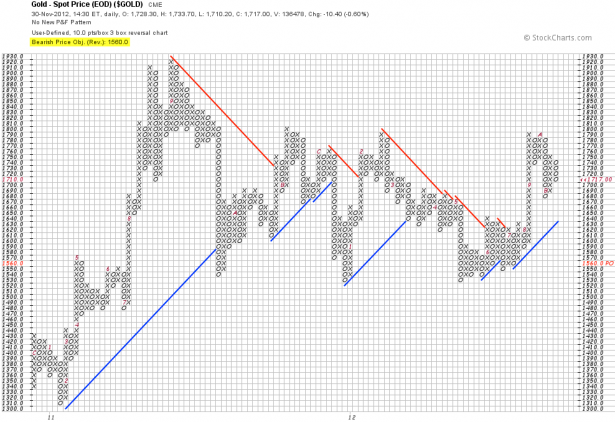 However the P&F is still asking for its pound of flesh as it continues to flag a bearish price objective of 1560. For the record I have been a bit critical about this one and have called it a bit optimistic (assuming you’re a bear). In short – I don’t see a great LT position here right now, as a matter of fact silver seems to be the better bet. 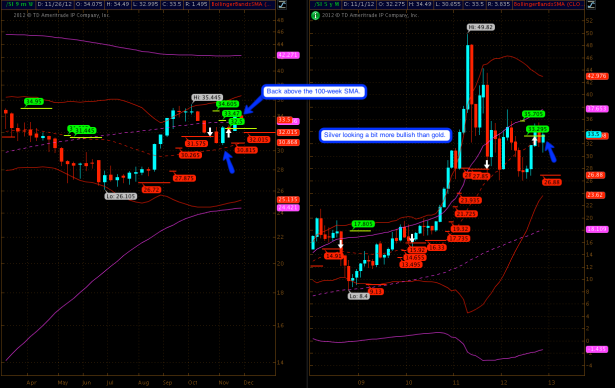 Speaking of which – here is the LT panel which looks a bit more bullish than gold. The weekly breached a NLBL and is now above the 100-week SMA. On the monthly front we are back above the 25-month SMA and even managed to reclaim that NLBL at 33.295. Which puts us into a LT long position with a stop below the weekly or monthly SMA. 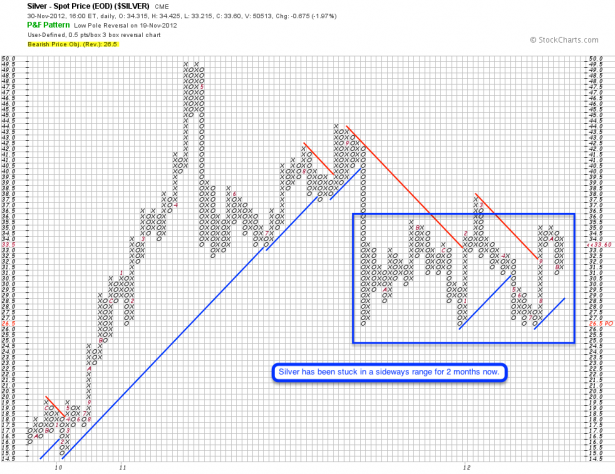 The P&F disagrees and also still asks for a bearish price objective. However it is also flagging a low pole reversal warning, thus justifying a speculative long position as suggested previously. 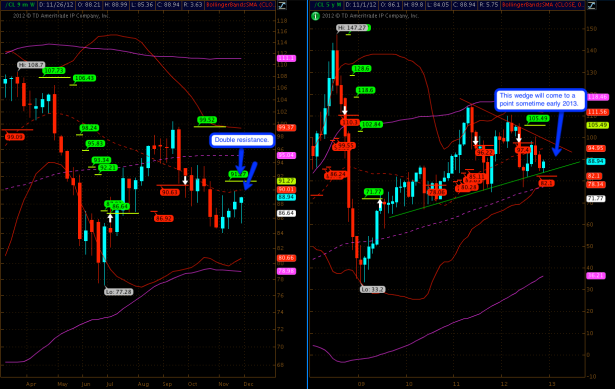 Crude has been a bit of a pain in the rectum lately but if you take a step back then it’s clear that we are curling up into some sort of sideways triangle. Which should come to a point in early 2013 at which point I expect either a breach of the 100-month SMA or a push above the 100 mark.

If the blood thirsty P&F gets its way then it’ll be the former as it’s still advertising a price objective of 77. I think the bullish scenario lives or dies at the 90 mark – the P&F suggests diagonal resistance there which roughly matches what we are seeing in the sideways triangle pattern above. 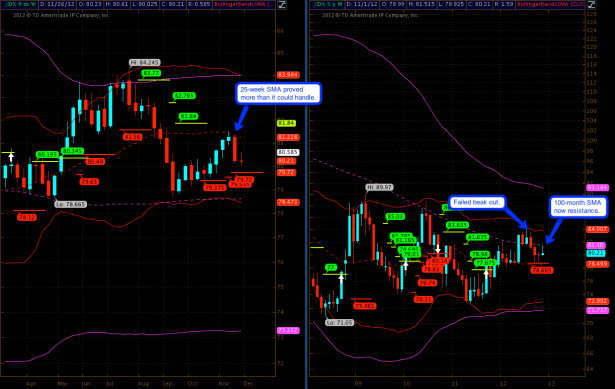 Last but not least let’s cover my Sorgenkind (loosely translates as ‘problem child’) – the old greenback. Unfortunately things are not looking very rosy over here post Thanksgiving. Before the holiday I was a bit encouraged to see it push into its 25-week SMA but in the end it proved too much to overcome. Since then it’s been the more of same old sell off and it now finds itself back below the 100-month SMA which is increasingly looking like resistance. 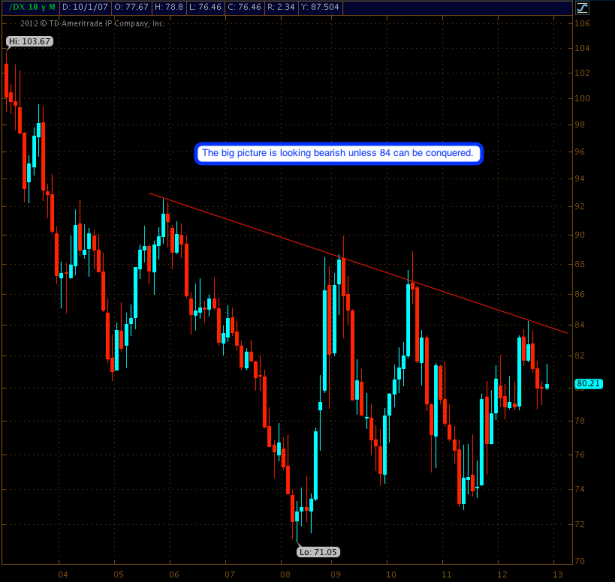 Here are the monthly candles of the last ten years which paint an ominous picture. That falling diagonal trend line has proven to be unsurmountable and until we do I expect us to continue to follow it lower. The current inflection point is 84 – a push beyond would break the old habits and potentially launch a nasty short squeeze. But unfortunately (for my exchange rate) there is little evidence that currently supports that scenario. 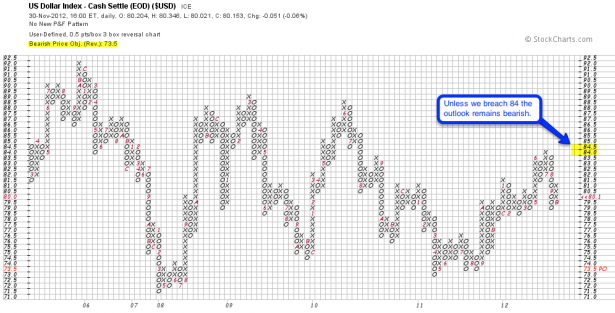 Quite on the contrary – the P&F chart once again is in a foul mood and won’t relinquish its 73.5 bearish price objective. Not a pleasant thought for this market megalomaniac as I earn in Dollars and pay in Euros. Maybe it’s time to go back to California? Given the current temperatures here in Valencia that thought seems rather attractive today. Say what you will about living in L.A. – nothing beats the climate over there during winter 😉