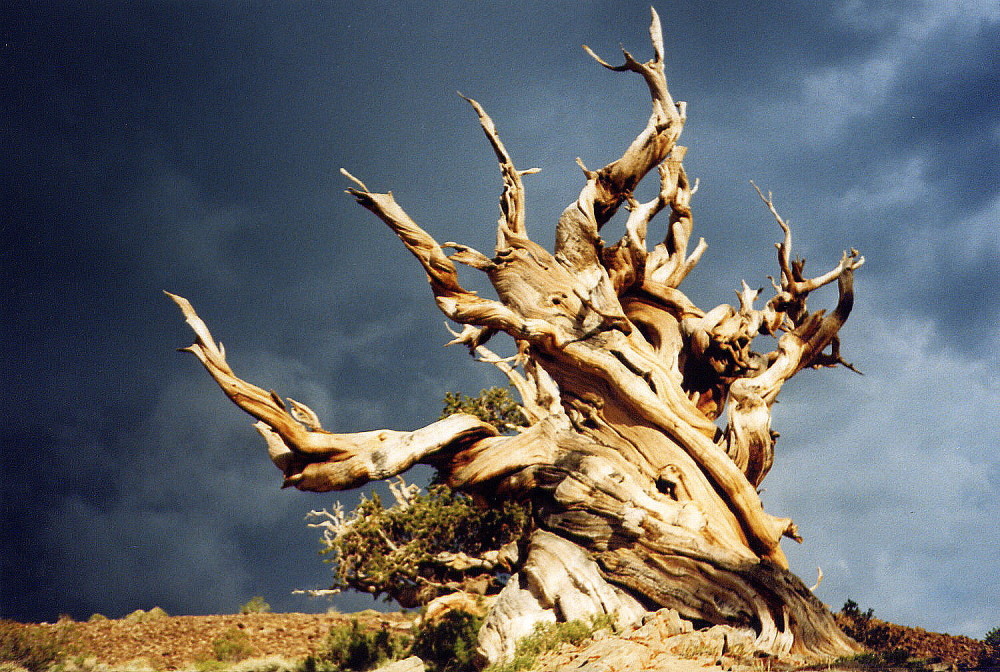 When looking for a good theme for this post I pondered for a while and then decided to use a picture of a bristlecone pine, which are widely considered to be the oldest living trees in the world. You can find them near the Nevada/California border and if you wind up traveling in the area then I strongly recommend that head over to Bishop and from there head up high up into the White Mountains. It’s a lovely drive and you will start seeing more and more of them as you reach an altitude of 8,000 to 10,000 feet which is far beyond the official tree line. These trees are ancient and by that I mean the average tree you’ll find is most likely several thousand years old. The oldest living specimen is aptly called ‘Methuselah’ and thought to be over 5,000 years old. Its exact location is a well kept secret among a small number of forest rangers in order to keep you monkeys from carving your sweetheart’s initials on it. You know who you are…

Now about that featured image. It’s actually one of mine I took many years ago when I was visiting the White Mountains. I had totally forgotten about it and the Panoramio account I created about a decade ago apparently has been disabled. So I was pretty surprised to see it being featured all over the place when googling for ‘bristlecone’ today. It seems to be pretty popular out there and I must admit that I myself was pretty proud after having taken it. My wife and I were punishing the shocks of our rental car on one of those less accessible grovel roads high up in the midst of White Mountains. It was getting late, a storm was brewing, and we had to be back in L.A. in four hours in order to return our rental car.

Suddenly I saw that beautiful tree on my left side with the light illuminating it and those dramatic dark clouds in the background. I instantly slammed on the breaks and jumped out of the car, then started snapping away with my old Canon. Meanwhile I instructed my wife to start measuring the distance to the tree in order to properly space some cha-cha shots as I was heavily into stereoscopic and lenticular photography at the time. So somewhere on an old drive inside a cardboard box in my L.A. storage all those pictures are buried, and perhaps one day I’ll manage to dig them up and re-experience that moment in high reslution stereo 3D 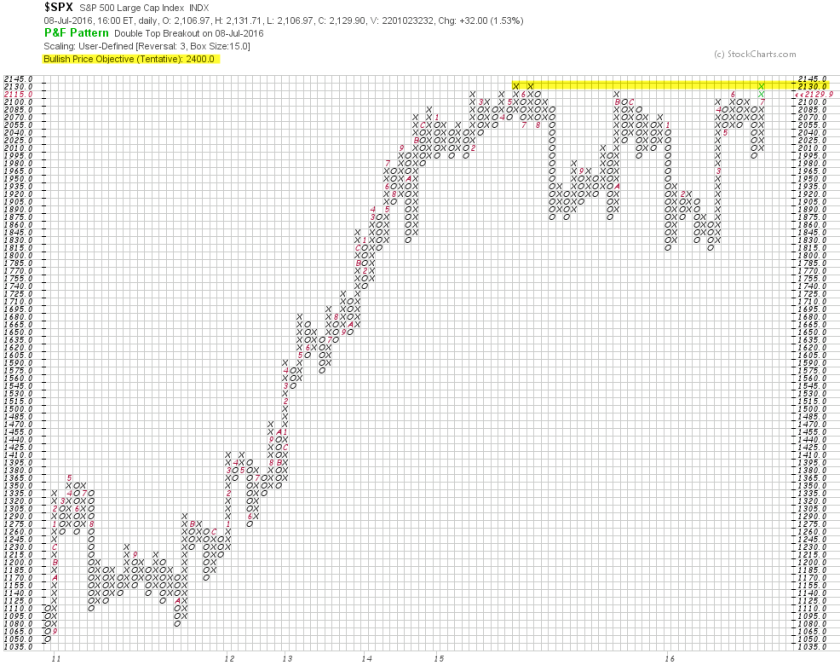 In comparison with the lifespan of a Bristlecone tree our human existence is but a short blip, a mere season to be followed by another. So when we’re talking long term in finance we’re less concerned with millennia or even centuries but rather years and decades. Our trading horizons are even shorter with long term trading decisions spanning weeks to a few months at most. Very few people hold positions over several years these days. It’s interesting how relative those terms really are, especially these days in the age of high frequency trading.

The chart above is a point and figure of the SPX and it has served us pretty well in the past. As it’s purely price based, totally ignoring time, it acts a bit like a bristlecone tree. Seasons may pass but its main concern is growth and attrition. Traders come and go – fortunes are made and lost – but it stands as a relic of time that plots the product of our financial endeavors. On that end we’ve seen a pretty nice growth spurt this season as we are now pushing back toward ‘The Wall’ which still stands near SPX 2140. The P&F is pretty bullish at this point as it triggered a double top break-out on July 8th and the new bullish price objective is now (are you sitting down?) 2400. 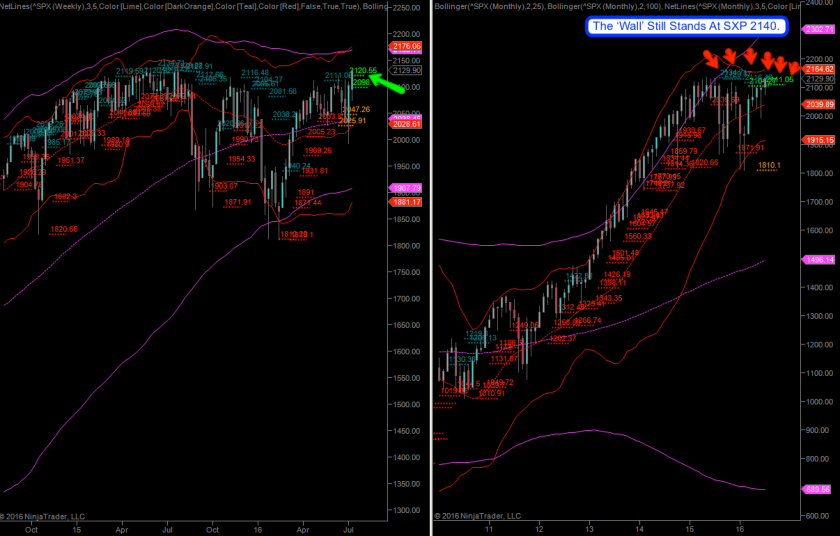 That’s quite a lofty target by all definitions but reasonable one given the fact that we have spent about 18 months in what now appears to be a primary degree (i.e. EWT speak, meaning long term) sideways correction. We are almost there but the final push into all time highs thus far has escaped us. As I’m writing this the ES futures are near 2130 and fair value is at -5 and change. So today could be the day when we finally cross that threshold and leave all that sideways mess behind us.

By the way if you are still in last week’s long campaign on the NQ I recommend that you do absolutely nothing because it would not be out of character to see a massive short squeeze this week. 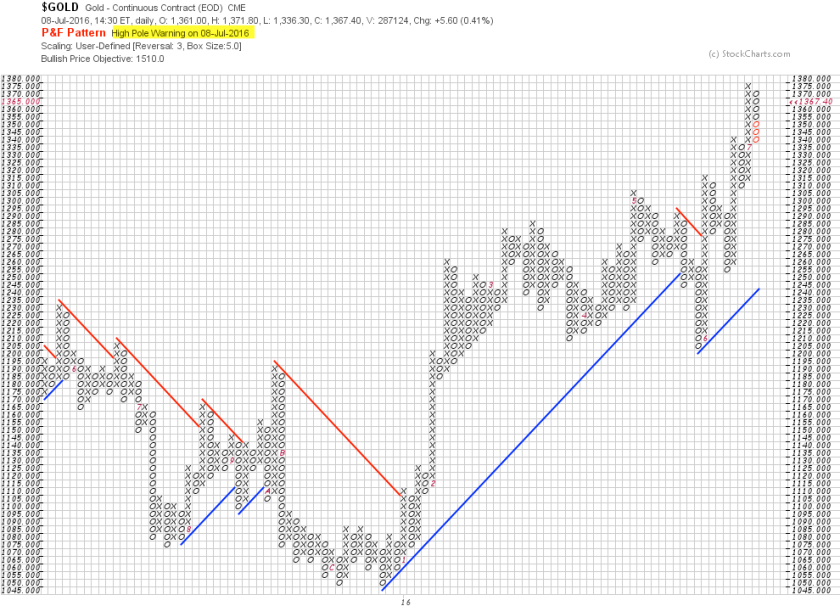 Which is what gold was supposed to be doing for us at this point but it was not to be. We banked some nice coin on the way up and luckily managed to get out on the first dip lower as precious metals got heavily stomped on shortly thereafter. That dip lower last Friday even triggered a high pole warning on the P&F above but thus far the bullish price objective of 1510 still remains. 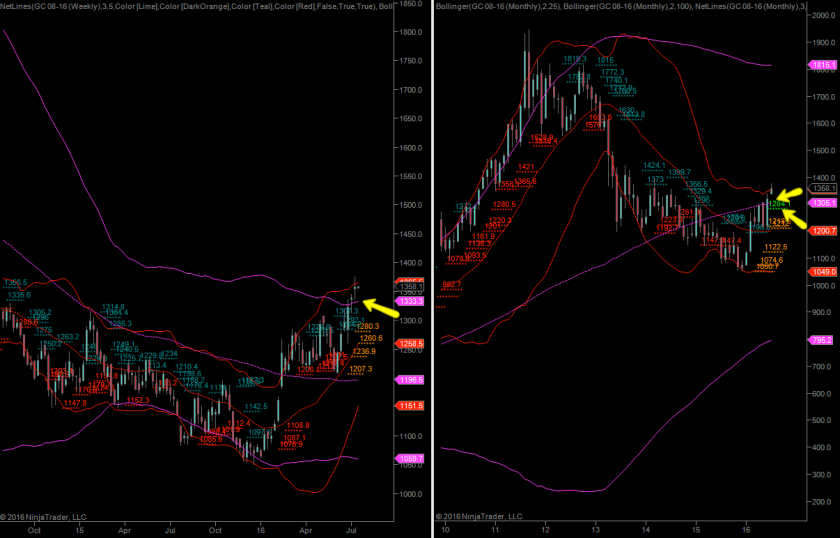 I think that we’re talking two scenarios here. Either we revert back to the 1330 mark or we may retest the 100-month SMA which is currently scraping 1300. That’s not necessarily bearish given the LT perspective and as a matter of fact I would welcome it as a very juicy long entry opportunity.