Valencia was hosting the Formula 1 today and although I didn’t make it to the beach it was very exciting to watch Fernando Alonso score a sensational victory for Ferrari. Also glad to see Schumacher get to the podium after his comeback. And if that wasn’t enough reason for those Españolas to keep me up at night: Spain also scored a clear win against France and it looks like they’ll make it to the Euro Cup playoffs. Viva España!

Of course if you live in the United States chances are you don’t even know what the Euro Cup is or why you should be excited about it. Having lived on both sides of the Atlantic this was always a big mystery to me as even South Americans seem to get what all the hoopla is about. Until a friend of mine suggested a possible reason – we yanks (I think it’s fair to count me in after 20 years) love complicated scoring systems, plus a 90 minute game is clearly not enough time for spending a Sunday afternoon with the boys. And then there’s the fact that football (a.k.a. ‘soccer’) does not allow for video replays. Personally I am siding with the fans and not with FIFA on this one. I mean, come on  – it’s 2012 – I really don’t see a reason why it makes sense to do without. 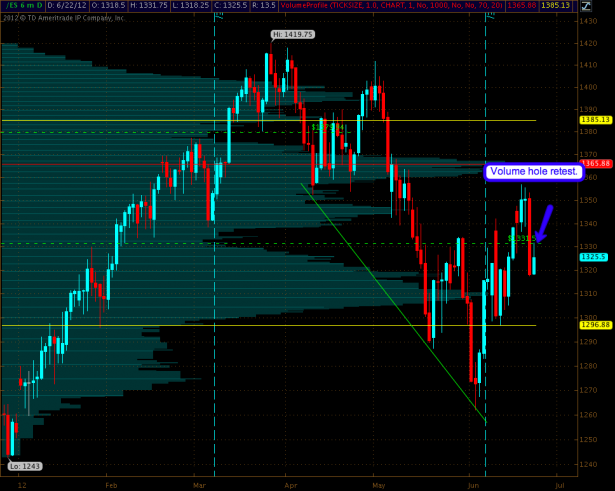 On the charting front we’re going to slow things down quite a bit however – way down, as it’s time again for a long term perspective. Nevertheless we’ll look at quite a few photo finishes. The only two daily chart today cover the spoos. Quite interesting that we touched our volume hole on Friday and bounced right back. A lot of things can happen over the weekend (and the futures are not open yet on my end), so let’s see if we stay below on Monday. 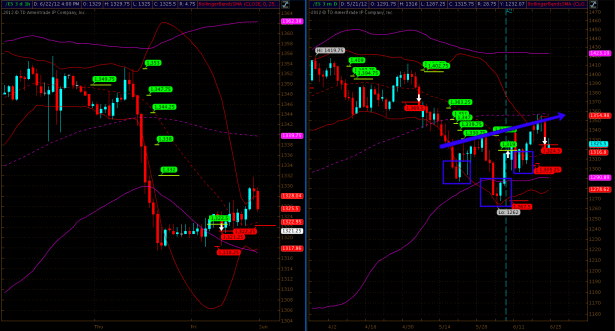 I’m still a bit skeptical about a full scale sell off and will remain to be until we get closer to 1312 – more about that below. In the meantime we have the potential for a admittedly messy but plausible IH&S formation – the resolution of which, as you may be aware by now, often is preceded by a final shake out attempt. 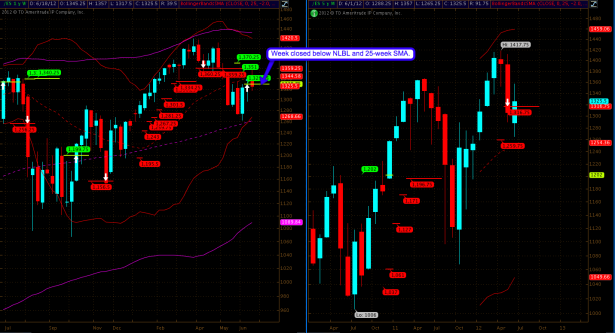 Alright, on to the long term (LT) then. The weekly shows us below the NLBL as well as below the 25-week SMA. The monthly panel however still has us above a monthly NLSL. It is important that we’ll remain above or I would consider this a big LT sell signal. 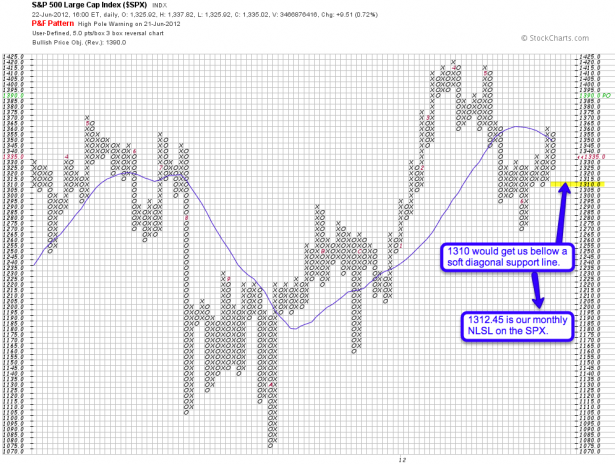 The SPX P&F clears some of the noise and shows us a soft diagonal support line that intersects near 1310. The NLSL mentioned ont the chart is not what I showed on the previous spoos chart – remember fair value. I am always a bit conflicted about which signals I should follow on the Net-Lines chart – the spoos or or the SPX. Personally I prefer the spoos as we simply have a lot more activity per day – 24 hours vs. only 6.5 on the cash index.

With equities out of the way let’s mosey over to the evil lair currency and commodities dungeons. Quite a bit more below for my intrepid subs: 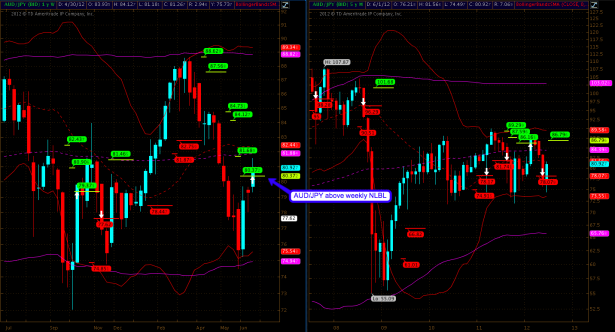 AUD/JPY has managed to climb above it weekly NLBL – on the monthly side we also see a snap back after touching the NLSL at 78.079. 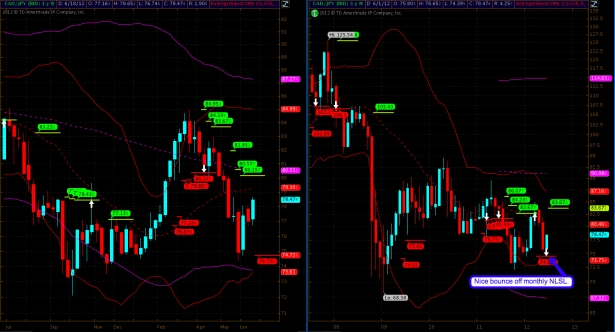 CAD/JPY shows us a nice bounce off the monthly NLSL – next resistance area on my map is the 100-week SMA near 80.5. 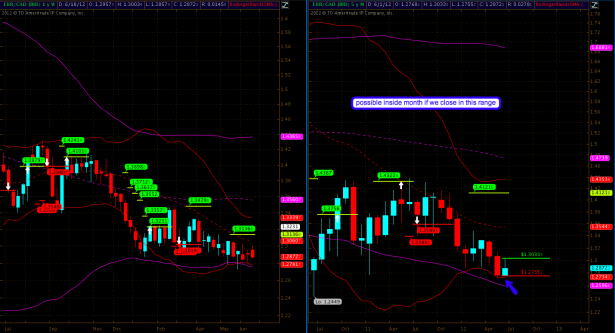 EUR/CAD may give us a inside month candle – assuming of course we’ll stay in this range until the 29th. 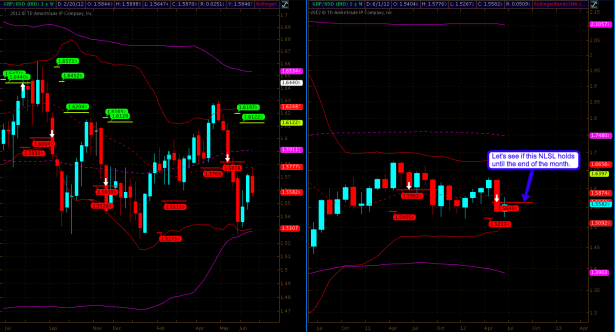 Cable bounced back at its 25-week SMA and remains below its monthly NLSL. If that keeps up until the 29th then I think we may have ourselves a nice LT sell signal here. 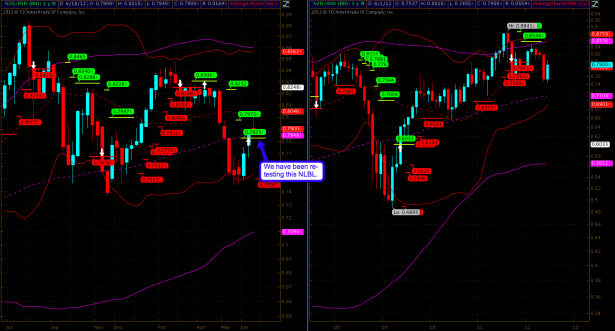 Last month the NZD/USD conquered its weekly NLBL and it seems June was a good opportunity for a retest. A good LT buy if it holds the Net-Line. 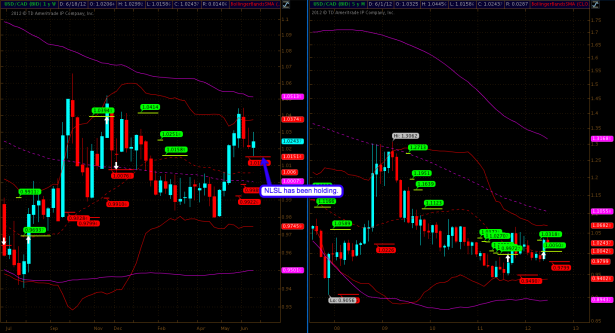 USD/CAD kissed its weekly NLSL and thus far has been holding. Not a bad LT buy here if it stays above the line. 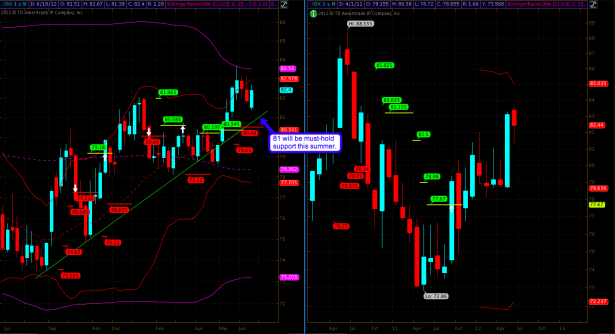 Ole’ bucky shows us a nice weekly support line which is now approaching the 81 mark – I consider this the do or die line of the current upside trend. 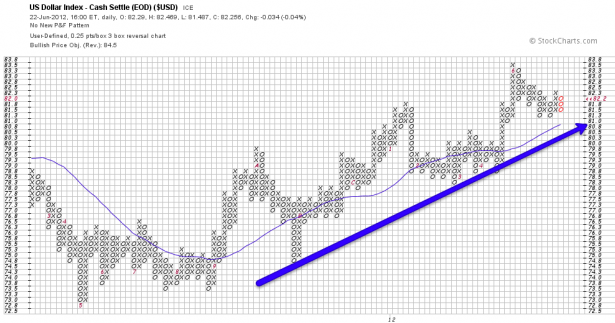 Speaking of the Dollar – here’s the long term P&F chart. I am being a bit liberal here by replicating a similar support line – nevertheless it also suggests that 81 does indeed hold meaning. Also note the bullish PO of 84.5 – for purely selfish EUR/USD exchange rate reasons I personally hope ole’ bucky can keep up the mojo and get us there.

Well, we’re just getting warmed up – let’s head over to commodities and mix it up with P&F and LT interval charts: 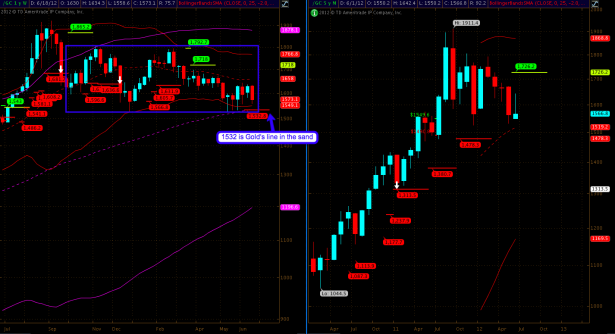 Gold has been wasting everyone’s time now for months. But it’s now starting to run out of time as we it is approaching its 25-week and 100-week SMAs. There’s also a weekly NLSL at 1532.8. A breach below that would be a smashing short opportunity – but until that happens we should sit tight or consider a long setup. Which however may just burn your time if this sideways pattern continues. 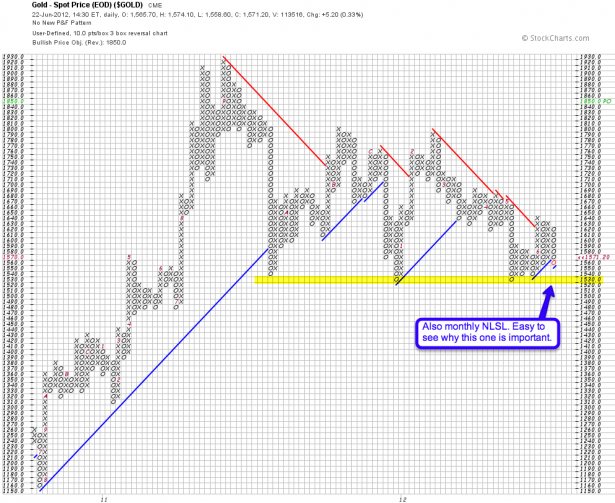 The P&F chart is crystal clear in indicating why 1530 is important. The chart says ‘monthly NLSL’ but it’s actually a weekly one – sorry about that. 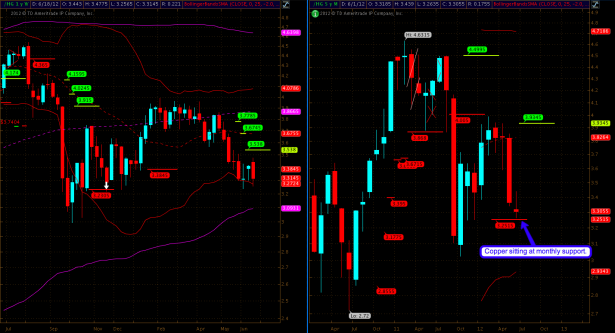 Dr. Copper dropped all the way to its monthly NLSL and then bounced back. That is bullish – assuming we stay right there until the EOM. 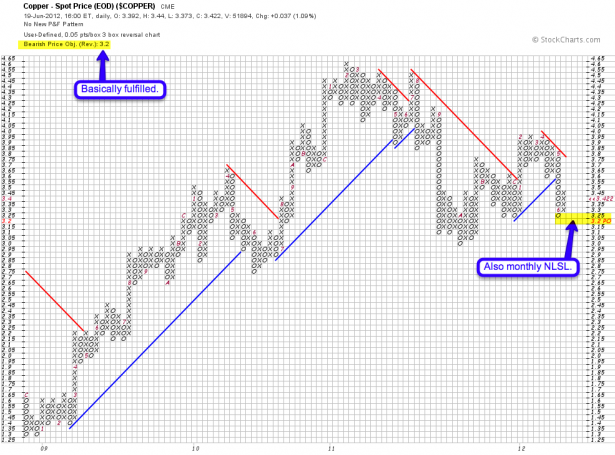 I guess the P&F is pretty clear – we did basically fulfill the bearish PO of 3.2 (plus a few ticks) and I am thinking long here unless of course we breach through the aforementioned monthly NLSL. That would be super bearish and possibly spill into equities as well. 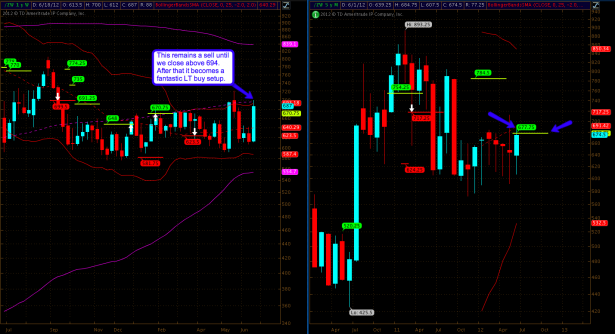 Wheat – excellent short here with very little risk if you place your stop above that 100-week SMA – plus there’s a NLBL that lines up almost exactly. I live for these types of setups. And you all know that I’ll be long if stopped out – this may actually the more profitable setup. 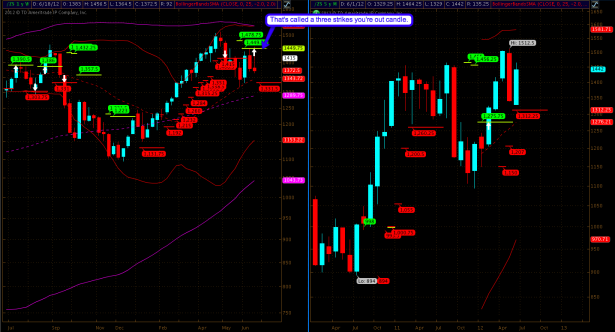 Soybeans have been rejected at the weekly NLBL three times now and we got another two weeks to go. Could have been a good short if you got in near the Net-Line. Not sure if I mentioned this last month but if you’re short be out at near the monthly NLSL as I see a little bounce there. 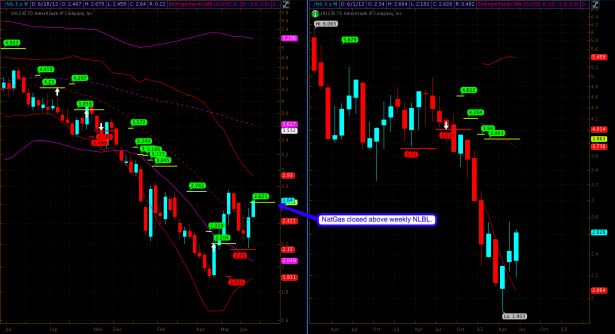 Natgas – right at its weekly NLBL – bullish, especially once we make it above last month’s highs. Maybe worth a handful of contracts but be aware that there may be a retest. 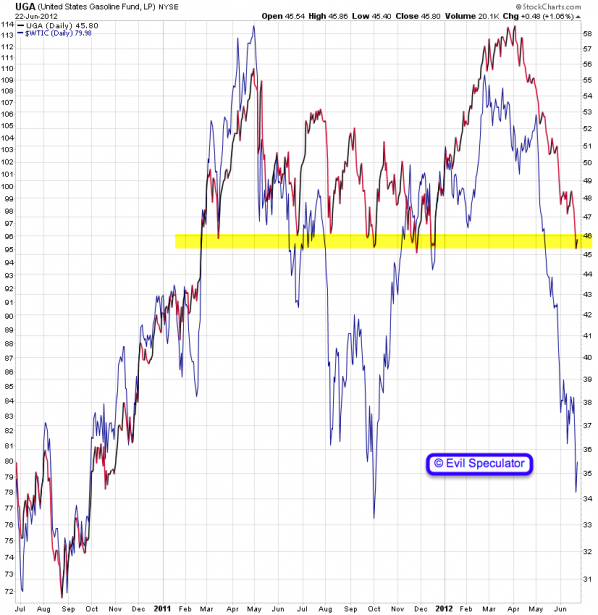 Finally a chart that has been really irking me in the past two years. We are looking at gasoline vs. crude here and the reason why I’m posting it is the exploding delta between those two recently. It’s not the first time that this happens – we saw the same the previous summer: While crude prices were tumbling consumers of gasoline (i.e. you and I and everyone else) continued to pay relative high prices at the pump.

They can tell me about refinery problems all day – bottom line is we are being systematically ripped off. Well, not me recently as I have abandoned driving a car altogether and am now using a Vespa here in Valencia – that thing basically runs on fumes. Not something I’d try in Los Angeles but that’s one of the many perks of living in lovely España 😉