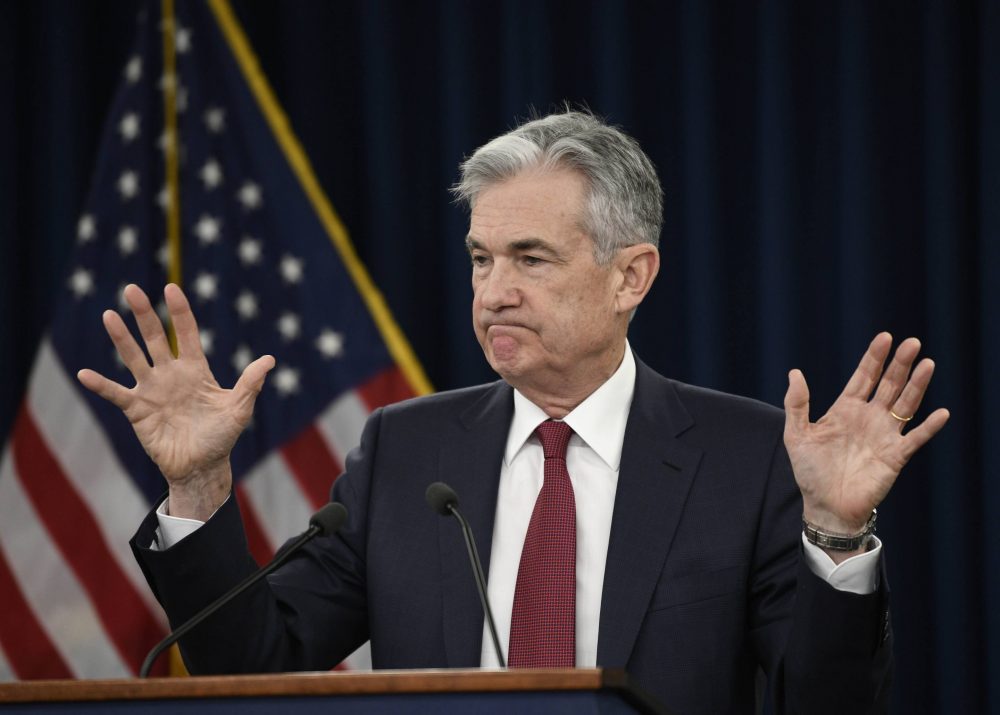 So I’m still waiting for someone to explain to me why we are even talking about a rate cut here. Last time I checked the SPX was frolicking near its all time highs while employment figures were at levels not seen since the mid 1960s. Nevertheless another rate cut appears to be all but baked in.

At least judging by the fed fund futures which are currently suggesting a 73% probability of at least a 25bsp cut in the fed funds target rate. Effectively meaning there’s no chance of no change.

Whether the past decade of quantitative easing was justifiable remains yet to be seen. The rampant moral hazard and ethical decay that we are witnessing all across the West seems to be arguing to the contrary. At least back in 2008 everyone could agree that there was a legit prerequisite for considering unorthodox Fed measures.

In the past when the Fed started to lower rates it was always during a financial crisis or as a belated response to an economy in distress. Since the June FOMC meeting economic data has beating expectations. The second quarter GDP report showed that the economy expanded at a 2.1% seasonally adjusted annual rate, following a 3.1% expansion in the first quarter.

Meanwhile consumer spending, accounting for 70% of the U.S. economy, grew at a 4.3% rate in the latest quarter. Domestic final sales grew at a 3.5% last quarter, doubling the 1.6% of the first quarter. And finally the average of the first two quarters shows GDP growing at above 2.6%, thus exceeding the Fed’s own forecast of 2.1% for 2019.

Yet despite all this the FOMC is now all but certain to cut the FFR by a minimum of a 25bps today and most likely follow up with yet another 25bps in September. Some analysts have even suggested that the Fed could announce an early end to its balance-sheet shrinkage. Exciting!

Anyway, I shouldn’t get upset as I’m still recovering from my rogue thyroid which almost put me into the hospital last week. My doctor was tempted to have me committed (yes in the insane asylum as well) but then decided to prescribe some meds along with copious amounts of bedrest.

Now the freaky thing about hyperthyroidism is that you are burning calories like crazy as your system is flooded with T3 and T4 hormones. The body starts to deplete first whatever fat you may have and after that taps your muscles as well. And it happens extremely fast, especially if you aren’t equipped with much fat deposits to start with.

Within the course of one single month I dropped from a 83 kilo (183lbs) lean and mean Gym God to a 70 kilo (153lbs) skeleton. Of course none of my clothes fit me anymore, except my shoes of course. Yes it sucks but I’m on meds now without major side effects and am starting to get better. 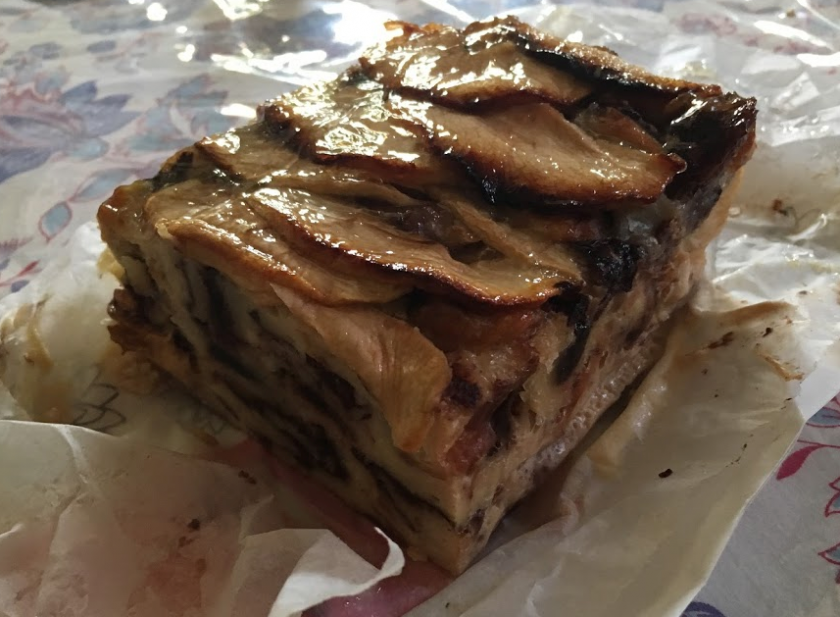 Now since I’m a glass half full kinda guy let me tell you the good part: I get to eat as much bred pudding as I want – it’s like I’m 12 years old again. The picture really doesn’t do this thing justice – my wife picked up two one pound blocks of bred pudding at our favorite bakery, which by the way made them specially just for me.

They’re literally two bricks of fat and sugar – delicious as hell and I’m going to eat my way through both of them. Yes, of course I’m eating nutritional stuff as always but my wife’s mission for the next few weeks is to fatten me up as much as possible again 😉 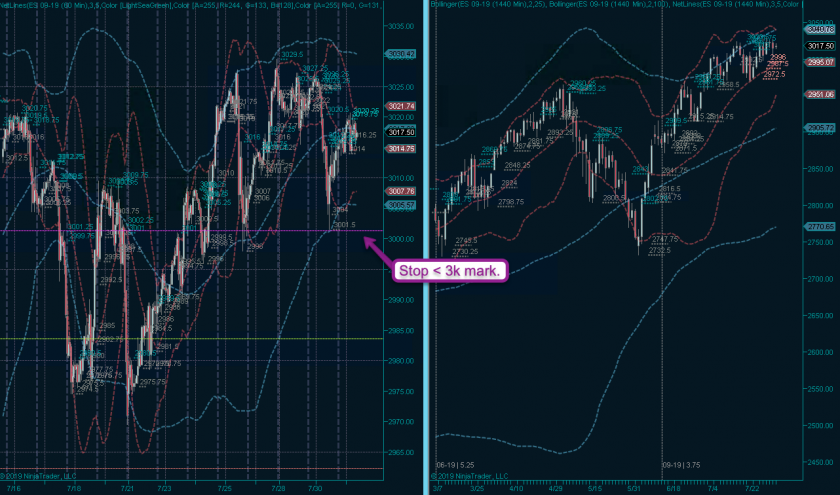 So over the past week I haven’t been trading much but most of our open position appear to be in fine shape. The E-Mini hasn’t moved much but after some HV gyrations I’ve finally advanced my trail from break/even to about 0.8r. I have an inkling this is going to increase significantly in a short order. 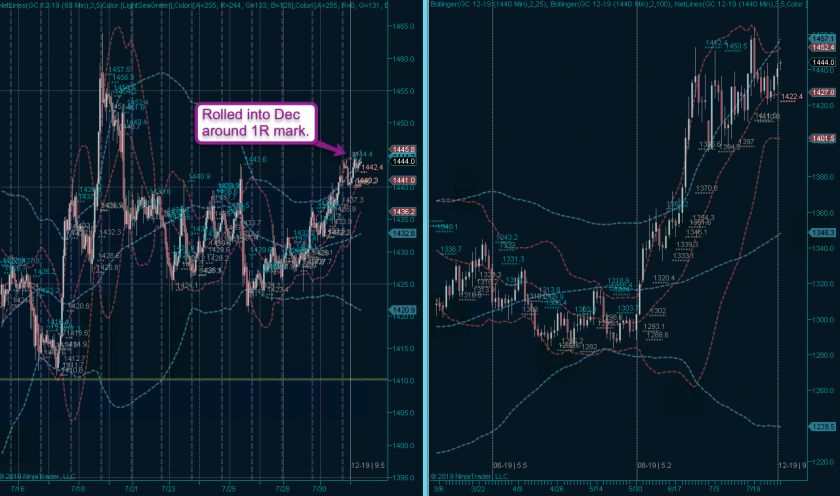 Gold also has been on summer churn and after 10 days I was forced to roll it into December at about 1R in profits. Not bad and the odds of continuation higher here look pretty good. 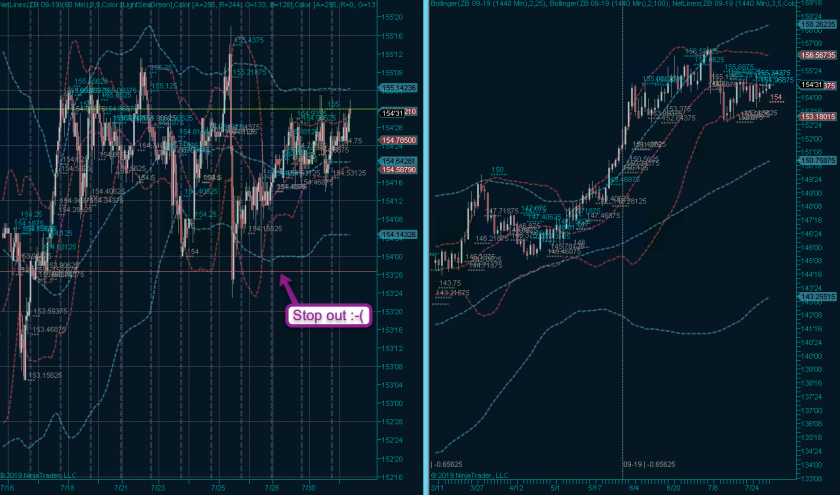 The ZB campaign unfortunately was stopped out during a quick stab lower. Which is a shame as it turned around almost instantly and now looks poised to head higher. A ton of intraday volatility here by the way which stands in stark contrast to the daily panel. And that means wide stops – wider than I chose last time. 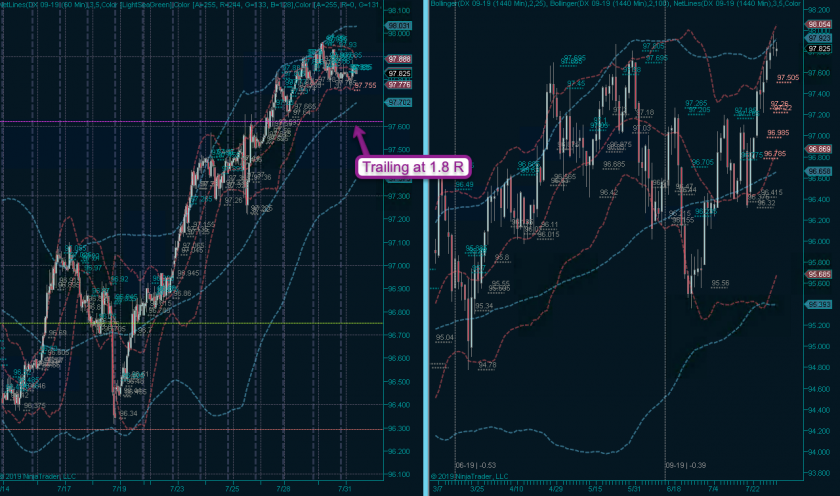 I kept the best for last: the dollar futures. I’m currently trailing at 1.8 but once again I have an inkling and this time it’s that this one is going to get touched sometime after today’s FOMC announcement.

Well it’s been a good run – not a great one – but given that the current Fed only pays lip service to a strong Dollar policy it’s probably as good as it gets.