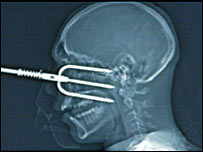 We look at the big picture, piece it all together and see something meaningful (fine); we feel a shift in trend and sense an opportunity is at hand (good); we absolutely know something is going to happen (very dangerous).

Again, what differentiates a winning trader at the end of the year is the willingness to minimize draw-downs. Since we can’t run like god all the time (and swinging for fences implies increased risk underwriting such reward), it means we’ve got to back-off when the market challenges our brilliant strategy/outlook and losses are at hand.

There are several ways to back-off, not the least of which is moving completely aside and waiting for your thesis to emerge. Too often though, we hold onto a subjective view and continue to fight, keeping in front of the trade. Once in a while this will work (if you come in only slightly ahead of a turn, for example), but far more often hanging-out on the wrong side of the tape (since you know better than the market) serves to harm in more ways than one.

First there are the losses, which bears know by now can be trying (see picture above). But second, there is the added draw-back of positioning yourself poorly for taking advantage of your original thesis; should it finally(!) develop. Yes, instead of a lovely sense of relief followed by a killing spree of gains, you are only too willing to take your little profit as relief initiates. You’ve been fighting for X number of days (months!) and now you’ve cemented your psychology in an up-stream mode. As pressure comes off and your trade evolves into a winner, you have to fight the urge to book the early gains (or lessened losses); crawling back to your den instead; happy to have survived with most of your entrails still contained.

If you simply get out of the way, however, it becomes much easier then to re-fire boldly as your belated genius begins to take hold and make money.

Did that make sense? The point is that losses kill, in future opportunity as well as present trauma – but still a strong part of you insists on hanging-out with them. Gains lead to more gains and losses beget further losses. Break the cycle before it can trap you; blow-out the losing trades and free yourself for future set-ups.

I’m a fool. I’ve said that many times, but I try fool-well not to be such an idiot. Trading for a living means you will be wrong on a regular basis (loser!). If normal life were like trading we would get into car accidents regularly, develop cancers on a monthly basis, accidently walk into oncoming traffic, sit down under falling knives, pianos, coconuts, etc.

Trading is not like real life! Stop thinking so logically.

Once you accept that you’re a freak, working in a freak field, it gets easier to stop holding onto losing ideas – no matter how brilliant they may be. And don’t think that because something is a small part of your overall portfolio that it is somehow less dangerous. Experienced traders know there is a tendency for our biggest losses to stem from those smaller positions. We’re on our guard when heavily invested in something, right? Well, we might be a little more slack when something cannot take us down in a day. Three months later you’re (finally!) cutting-off a limb because the gangrene stench means you can’t keep pretending it doesn’t really hurt.

Blow it out – cut cancers off at the toe while you have the chance.

Obviously I have learned the hard way – you will too if you haven’t already. If this doesn’t describe your experience – get away now and spare yourself! How easy is that? This game will warp how you look at everything.

There is no good reason to take a stand against a larger trend because of something  you think. Taking a shot when you see a set-up is great – you need to do that. It’s ironic, but even though you will lose limbs on a regular basis you need the gumption to attack like you can never be hurt. That gets harder as you get older (since the many wounds start to take a toll and create a risk-averse psyche). But fight like you mean it, you’re not going to win otherwise.

And then cower like a fool when things aren’t working. It’s kind of that simple, actually.

Case in point, if I had not been positioned short coming into today’s session, I very likely would have sold short into today’s close. But coming in short (aggressive accounts at least), means I was forced to neutralize – to run like a coward instead. Trust me, this is a better approach. The reason is that now I am free to fight again. If the short-line starts working tomorrow I am going to get in there and attack, but if the bulls log another ever-victory, I’m just sitting behind my yellowing curtains and knitting from the sidelines while things develop.

Yes, I personally still have a position, but this is because I think I know what I’m doing; and it is balanced market-neutral for the time being. If I am newer at trading, I am out altogether and simply waiting. But if I had taken my first shot short late today, I would add to that tomorrow on any weakness. I have a licence to attack in that case because I am gaining (and limbs are in tact). If I am bleeding, then I have to retract; period.

See the difference? I trade myself just like I trade a stock. I let out more as I’m gaining and I fire my ass to the sidelines if I’m losing.

I know I’m a fool because I trade for a living. Being a trader means I am wrong all the time. I don’t need to pretend otherwise, there is no shame in being wrong with such a dynamic as the market. Why should I stand up strong and tell myself and everyone who can read a blog-comment that I’m really right, even though I am losing? I’ll stand up tall and tell you I don’t know a bloody thing. If I was so smart I wouldn’t be here. I’d be a corporate lawyer wondering why there’s only 24 billable hours in a day.

Cliff Notes: Maybe you’re like me – maybe you’re a trader. I can’t help you with that. But hey, you’re wrong all the time (I know) – so there is no reason then to keep fighting the ugly, losing fights. We’re fighting every day and the blows add up. You can be Tyson and storm the world, but you’ll be crushed soon enough. You’ve got to more of a coward than that if you want to come out ahead. You’ve got to minimize the blows. When your opponent is weak, that is the fight you want. Every trade is different but the best trades tend to work right away and just keep working. When you are doing best in this game, the gains come very, very easy.

What is the point of struggling so hard then, just to lose money?