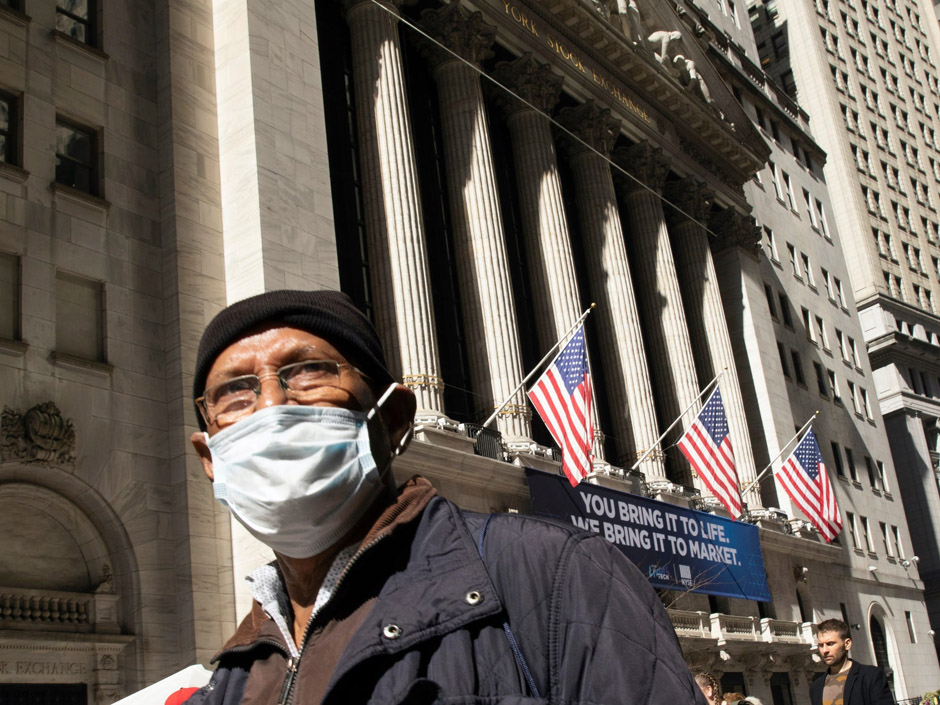 The market seems to be going through a manic depressive phase right now which is increasingly affecting its ability to handicap risk. This was to be expected to some extent given the turbulent times we live in. But there’s a lot more to this and in essence it all boils down to the growing contrast between two clashing world views, with Wall Street apparently ready to go back to business as usual while Main Street finds itself mired in a political cold war that may extend far beyond January 20th and the inauguration of the 46th president of the United States. 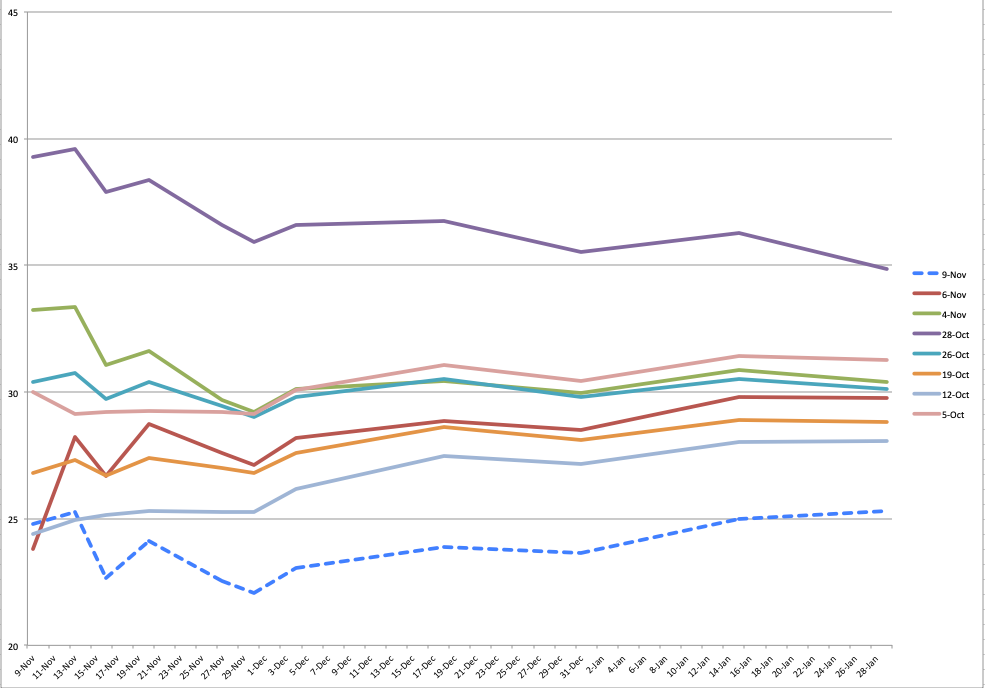 I’ve been posting this graph throughout the past month and it’s been a very worthwhile exercise as it does a bang job of visualizing the propagation of market sentiment throughout the tail end of the presidential election season. Which by all intents and purposes has not concluded yet as the final results have not been certifiied.

The dotted line shows us the current situation which clearly depicts a massive drop of IV all across the board. And that’s usually all we are concerned with. I mean how many of us actually plot the propagation of sentiment across the SPX chain on an ongoing basis? Only nutcases like yours truly obsessed with volatility perhaps and even for me this is a first.

This type of data is usually very difficult to acquire and to plot, which is why everyone basically adopts the collective long term memory of a housefly. But looking at the graph above makes it clear what the market as a whole thought about the elections ahead of the big day and thereafter.

Which stands in stark contrast with most of what I’m seeing across Internet forums, blogs, social media, and the mainstream media – all of which are still in scorched earth battle mode with no end in sight. And I’ve got to ask myself – as a citizen as well as a trader – who’s got it right here?

Clearly the market thinks that we’ve got a president-elect and that it’s time to move on. Main street on the other hand is gearing up for a protracted political war that may end up in more violence and ideological brinksmanship. As a citizen I cannot answer that question to be honest as I’m not the predicting type and at this point pretty much anything can happen. If nothing else 2020 has been a textbook case for my hypothesis that attempting to predict the future is a fool’s errand.

But as a trader I cannot help but worry that Wall Street may either be getting a bit ahead of itself or perhaps may be setting a major trap for the bulls. Let me show you why: 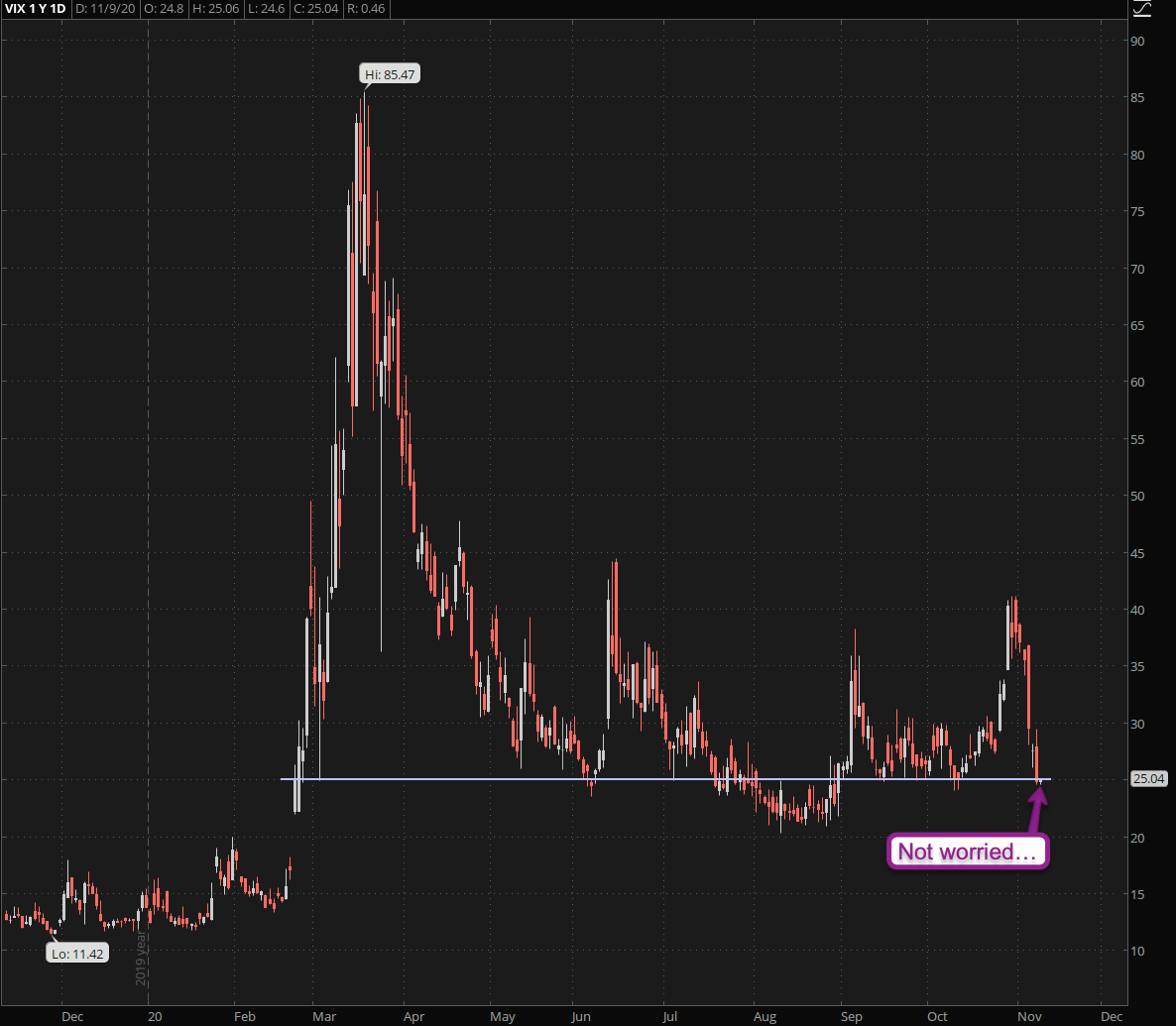 The VIX is back at its current baseline near 25. A breach below is of course possible but unless the election debacle resolve decisively in the very near term future I think we’re getting pretty close to the bottom of the barrel on the IV front. 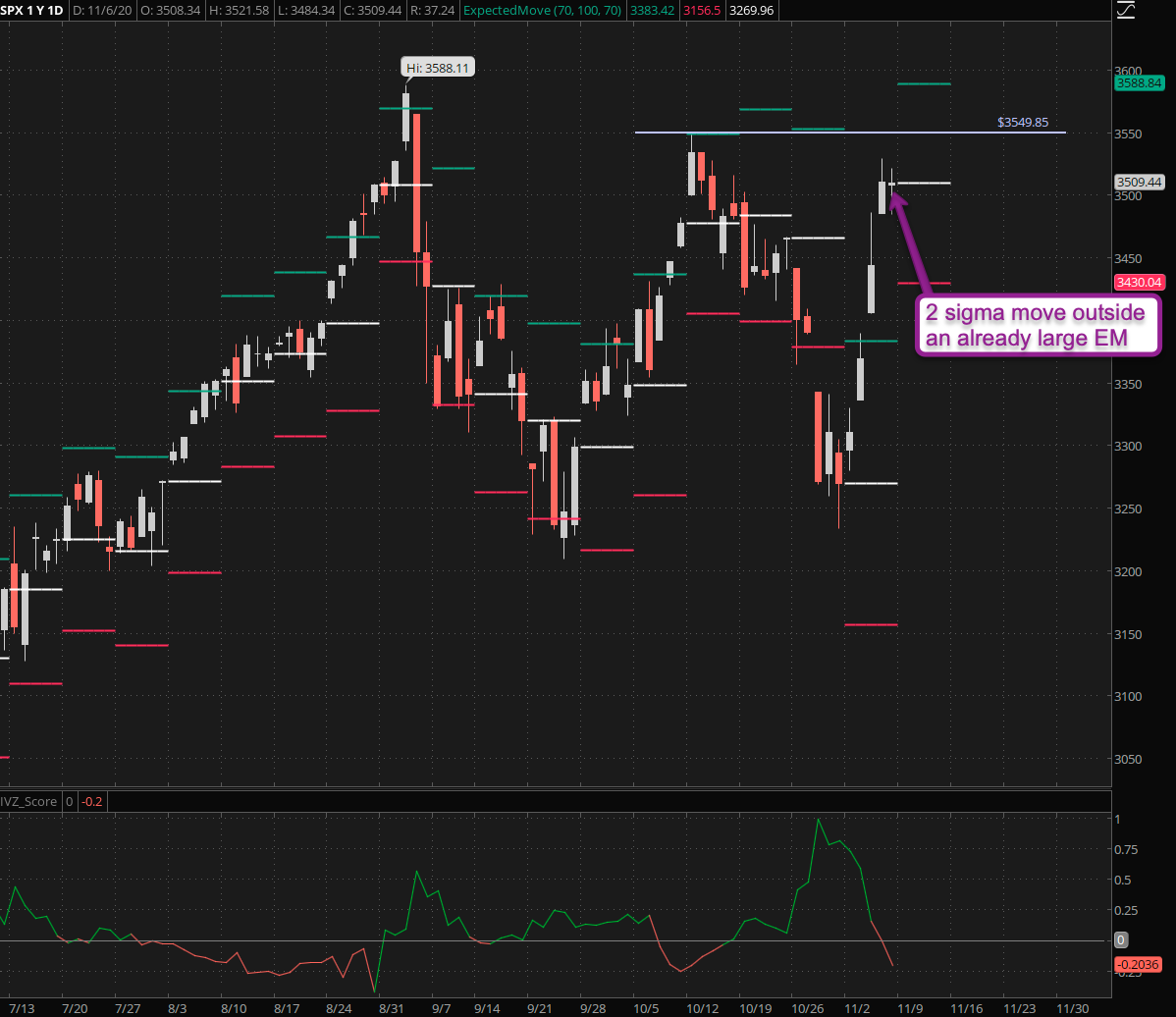 Which is interesting given that the SPX has been busting through its weekly expected move several times over the past few weeks. In fact in week #45 (last week) the weekly EM was tagged about 160 SPX handles – we ended up pushing twice as much. 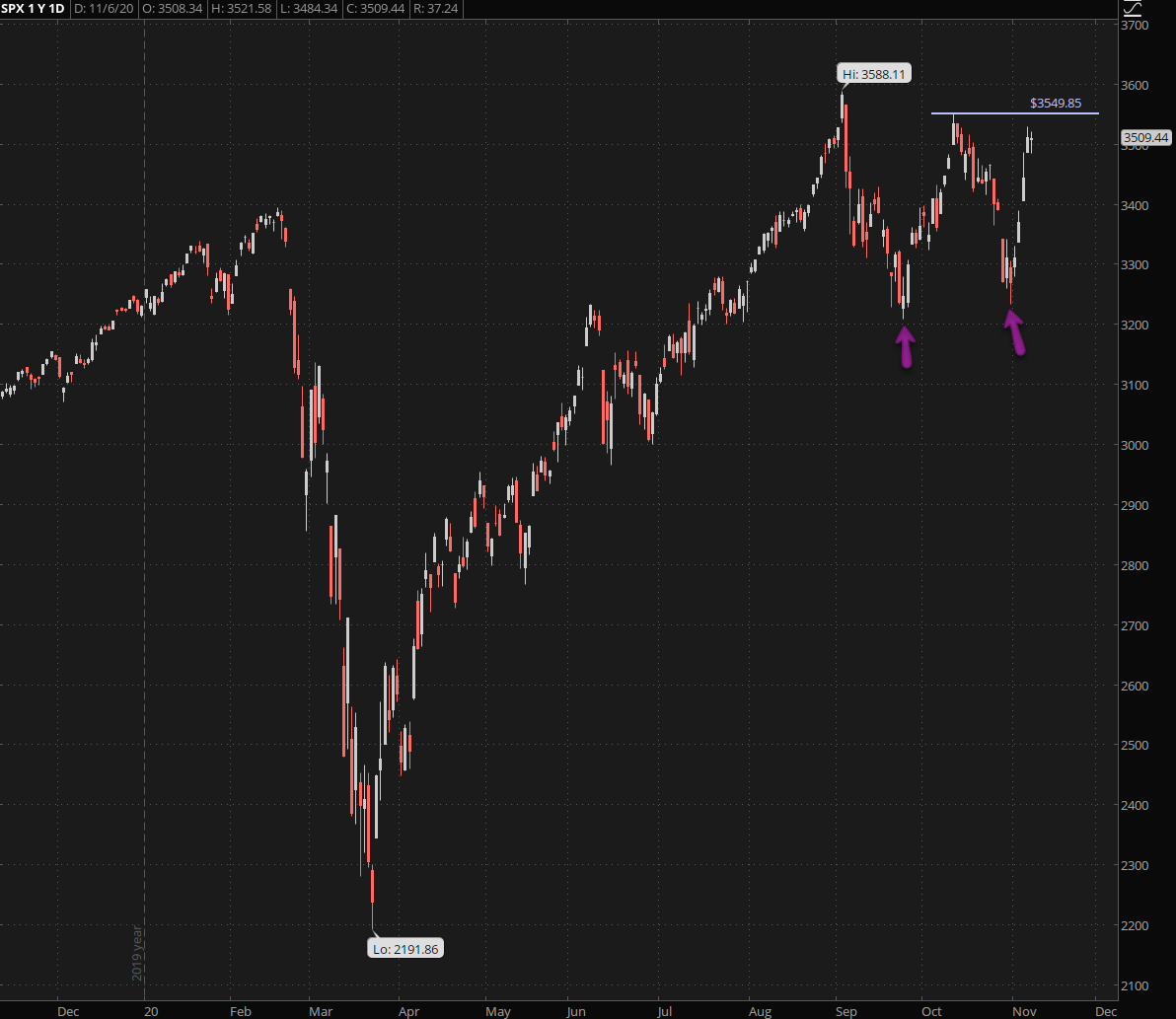 Which incidentally is getting us back to a possible triple top double bottom type of conundrum. Is it a bull trap? Well, we’ll know pretty soon as a push above SPX 3600 probably resolves this formation (to the upside). So not a bad spot for a bit of downside protection or pertinent speculation, if you get my drift. IV after all is relatively cheap right now. 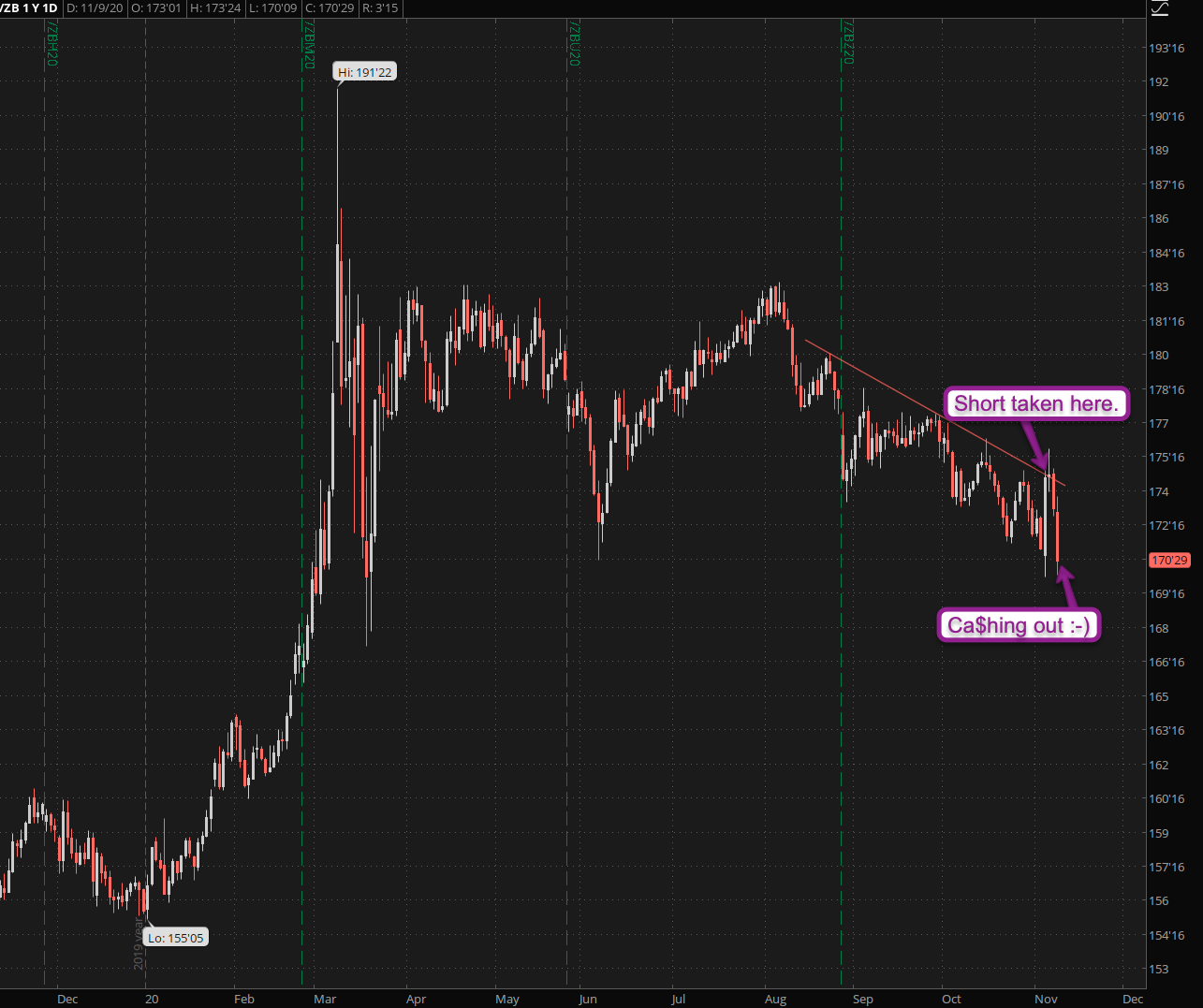 But from a general market perspective this suggests the market is pushing back into riskier assets post election, assuming court challenges and other legal maneuvers will amount to nothing, and that Biden is on track to be sworn in on January 20th. If that scenario disturbs you then please don’t shoot the messenger – I’m merely reporting on what I’m seeing in the market.

But wait there’s more… please meet me in the lair for an update on what lies ahead in regard to market volatility – as well as the weekly stats: