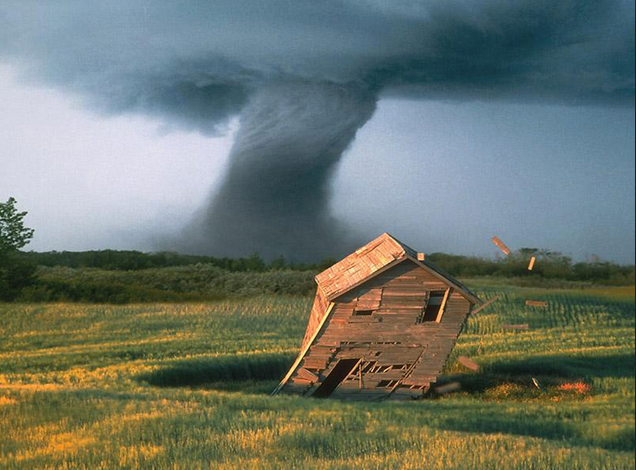 In the past few years I have spent quite a bit of effort categorizing distinct market phases as they clearly can affect both discretionary as well as automated system trading. I often also refer to it as ‘market weather’ and my first treatise on the subject was two years ago in a pertinent post. It mostly focuses on the psychological aspects of how market gyrations affect trading behavior and distorts perceptions among market participants. In combination with a trader’s respective cognitive biases various market conditions will affect one’s daily activities. Whereas a swing trader may be perfectly happy and successful playing the swings in a volatile sideways market a trend or system trader may run into draw down periods, thus affecting discipline due to recency bias.

Of course there are various technical approaches of how to categorize market periods and among my favorites are Van Tharp’s SQN based approach or the StretchStat and VolStat indicators developed by Ken Long. Scott recently covered those in his posts, so if you want more meat on your sandwich then I suggest you point your browser here. 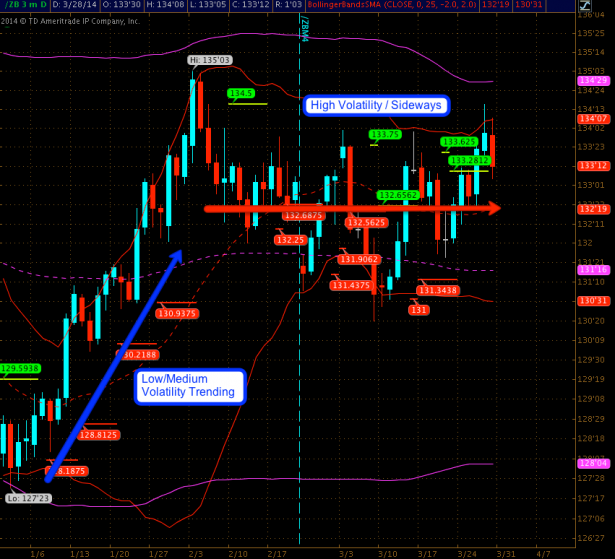 In today’s post however I want to go back to the basics as you don’t really need any fancy indicators in order to develop a pretty good ‘feel’ (if I may use that word) for categorizing various market periods on a chart. The human mind is actually pretty damn good at pattern matching – and with a bit of practice it’ll quickly become second nature. So let’s cover a few core markets of recent past, starting with the bonds.

This is actually a wonderful example as the difference in the two prevalent phases couldn’t be more salient. Starting in early January until the end of the month bonds pushed up significantly in what I would call a low to mid volatility trending phase. If you recall Scott’s treatise on the subject – that is a very common period and one I would categorize as easy to slightly challenging for the average trader. Of course your mileage will vary greatly – again for a trend trader this can be fun, for a swing trader this is more challenging as reversals/corrections are shallow.

The inverse speaks true to what followed – a high volatile sideways market which I consider the most difficult for most retail traders. The reasons for that are plenty and have been rather prolific on this subject and prefer to not repeat myself in this post. Suffice to say that anyone with a directional opinion or expecting resolution will be taken the woodshed all the way through Sunday. 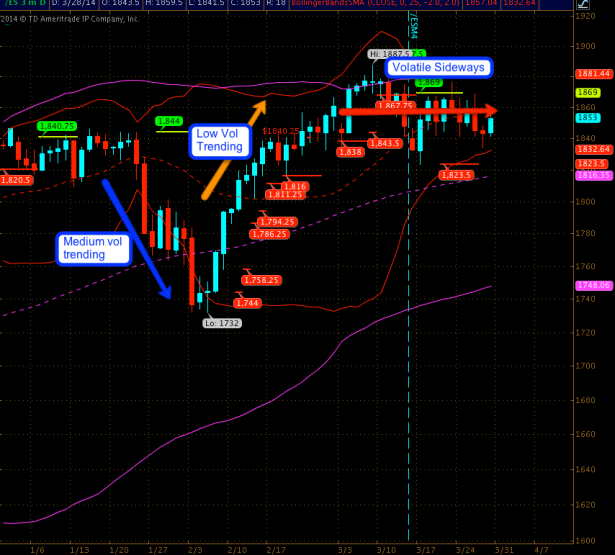 Here is another example – the spoos on which I highlighted three distinct phases. The sell off in January was rather directional but with some volatility in the middle. What followed was a low volatility trending phase. Of course any indicators won’t tell you that until you’re halfway in but the human mind can easily pick up the fact that we have very few overlapping candles and most importantly 10 consecutive higher highs in a row.

Since about mid February things however got a bit more dicey and I would categorize the recent month as a volatile sideways period – once more the most difficult to trade for most participants. Psychologically also rather taxing and it has been taking its toll right here in the comment section (which has been rather quiet in the past two weeks). I always try to warn you guys when I see storm clouds on the horizon but often get the impression that very few are listening. Perhaps educational posts like these will serve to instill a bit more sensitivity as to when trading can be easy and when it can feel like helping Sisyphus push a rock up a steep hill. 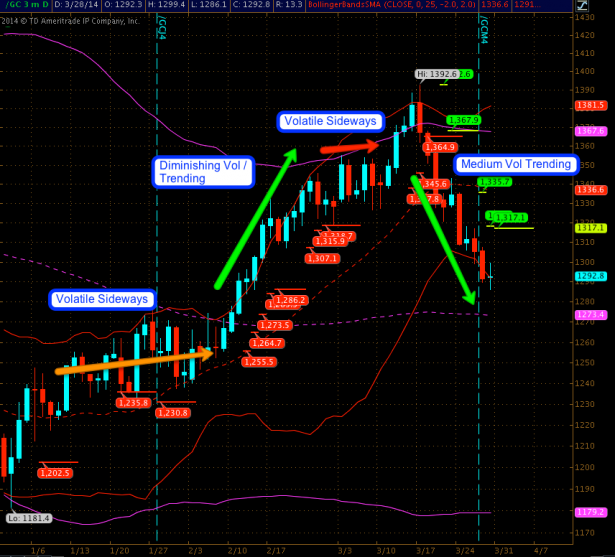 Another example gold – I think one of the reasons why we have been rather successful in trading the shiny metal is that gold has the habit of switching between volatile sideways and trending phase with a mix of volatility, usually medium to heavy. You probably remember our gold entry in early February at which point I was expecting gold to continue trending higher. What I did not anticipate is that it would make a sudden u-turn but what’s interesting is that the market phase has barely changed – we are still trending and volatility is probably identical to what it was on the way up. So clearly we must differentiate between direction and market phase. For the seasoned trader direction may be insignificant but retail traders often get married to a particular direction, with the expected results. 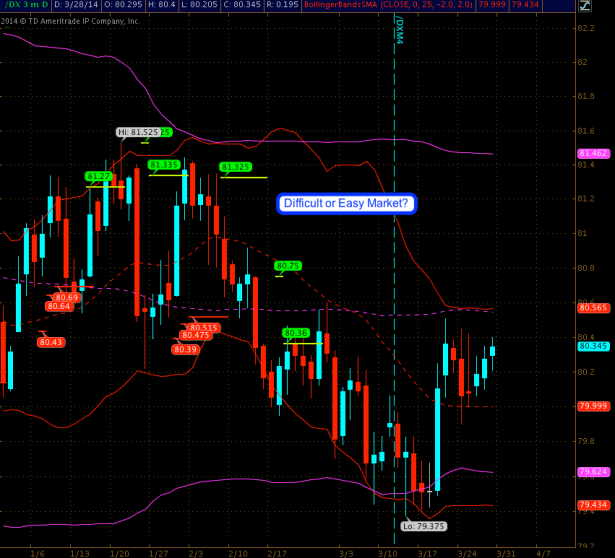 And then there are charts which are almost impossible to categorize – I usually stay away from those unless I see then knocking on very pronounced inflection points (a subject for a different day). But when you look at a chart just like this – what do you see? What I see is acceleration followed by slower periods. In terms of volatility that creates a strange mix – the tape looks pretty directional but it’s rather volatile. But clearly this is NOT any easy chart to trade, would you agree? 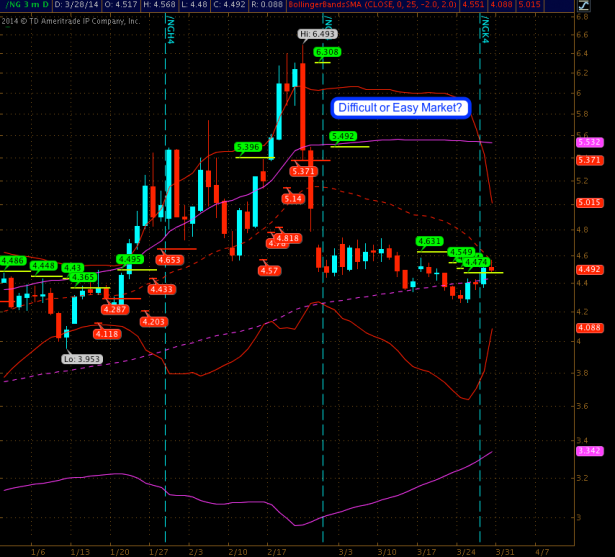 Here is another example that may be even more pronounced – the fabled natgas contract Just look at how different these market phases are and I haven’t even bothered trying to categorize them. An accumulation of slow/sideways tape followed by quick spikes, long wicks, and sudden reversals. I also see a lot of gapping action and for a futures contract that is very rough to trade. Once again, stay away unless you really know what you are doing.

In summary – market phases are much neglected but integral part of trading and one you should come intimately familiar with. System developers often thrive to write systems that offer a lot of opportunity by being in the market all the time. That’s understandable but it is largely based on an unrealistic assumption that the same entry and campaign rules will work in all market conditions. Instead you will find that some systems promising only a very small or no edge may suddenly work extremely well if used only in the context of certain market conditions. To that end it is important that you sit down and document the characteristics and beliefs of your trading activities and then correlate them with the various market conditions you will encounter. Again, that in itself deserves its own post and I think Scott has definitely pointed the way.

My own work is strongly influenced by market categorization and without padding my own shoulder many here would agree that it has kept us out of various traps in the past. This morning’s spike higher for instance could not have been predicted but it had pretty good odds given what we saw on the Zero as well as in the context of the tape we experienced in recent weeks. Which is why I happily exited my TF trade yesterday according to the rules.

In essence what you always want to ask yourself is this: Does the current market phase impair or support my trading activities? In either case you can either change your current approach or just sit on the sidelines until you see better weather on the horizon. Unlike fund managers or professional traders you are only responsible for yourself and your personal assets, thus you are afforded the luxury of flexibility and the ability to be nimble. Once you are pushing a few hundreds of millions of Dollars around the dynamics of trading become quite different. It’s like the difference between driving a speedboat and an oil tanker. Say what you will – the speedboat is a lot more fun and if you’re lucky you’ll enjoy attractive company in sexy bathing suits.

The Mole
Mole created Evil Speculator amidst the chaos of the financial crisis in early August of 2008. His vision for Evil Speculator is a refuge of reason, hands-on trading knowledge, and inspiration for traders of all ages and stripes. You can follow him and his nefarious schemes at the usual social media waterholes.
Enjoyed this post? Consider a small donation to keep those evil deeds coming!BTC: 1MwMJifeBU3YziDoLLu8S54Vg4cbnJxvpLBCH: qqxflhnr0jcfj4nejw75klmpcsfsp68exukcr0a29eETH: 0x9D0824b9553346df7EFB6B76DBAd1E2763bE6Ef1LTC: LUuoD6sDWgbqSgnpo5hceYPnTD9MAvxi6cPayPal: https://paypal.me/evilspeculator
Compare
Go