Meanwhile Over At The Turtle Race 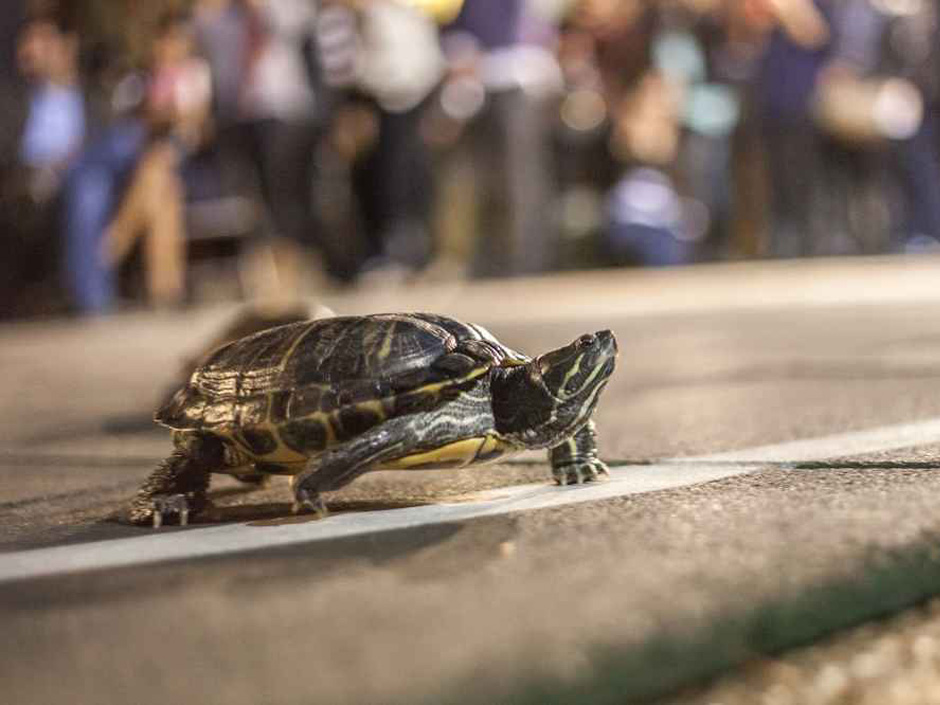 I’m running into some data feed related problems this morning, which made catching up across the board a bit painful. But frankly it doesn’t look like I missed much of anything, thus reaffirming my notion last Tuesday that the rest of the week would amount to a nothing burger. Well, I’m back now, so can someone please throw some meat into this tape?

Mid summer is rarely a fun time to trade and 2018 obviously won’t be the exception. Surprisingly the E-Mini hasn’t gone anywhere since last Tuesday despite quite a bit of central bank related turmoil.

And guess what – we’re going to get a bit more this week. Oh joy! 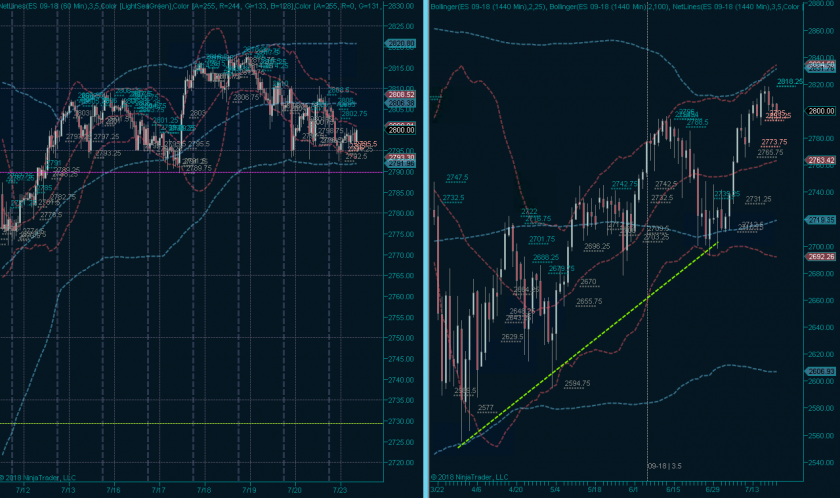 My ongoing long campaign miraculously survived the various stabs lower thus far and I am keeping my trailing stop at about 2.5R. 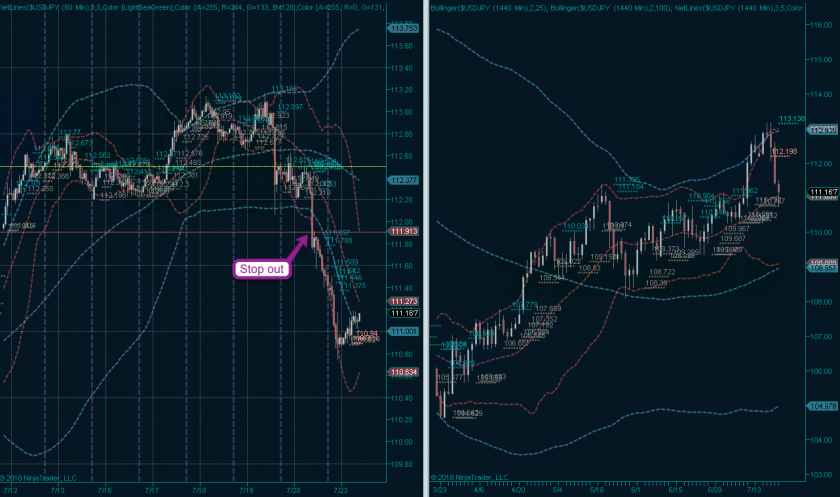 The USD/JPY stopped out at ISL on Thursday and has been falling ever since. There is a case to be made for a long position here near the 25-day SMA and a cluster of Net-Line Sell Levels however I would prefer to see a retested spike low in place first. 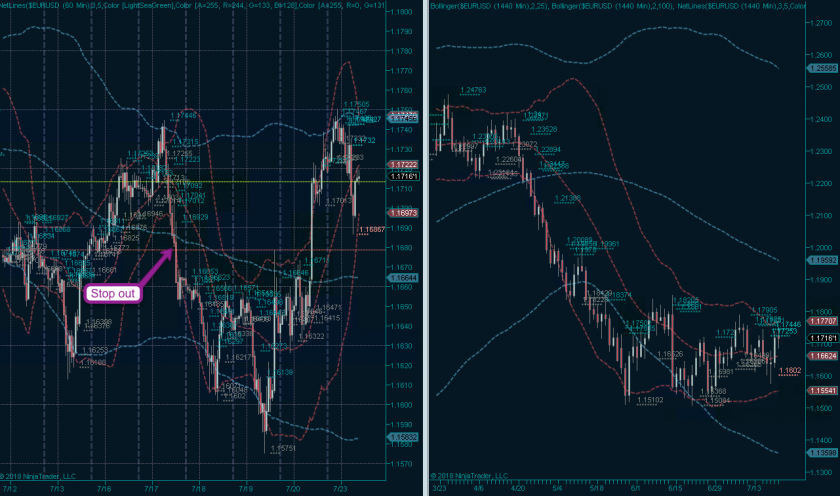 The EUR/USD was supposed to hedge against the USD/JPY somewhat but I should have known better that both would be going through the motions. There’s simply way too much turmoil and uncertainty in the forex markets right now due to the glorious mess that Merkel and her globalist cronies in Brussels have created over the past few years.

I’ve said it before and I am going to say it again: I have a hard time imagining how the Euro is going to survive much beyond this decade. Hard times coming but the sheeple over here in Europe are still partying as if it was 1999.

On that node, I really miss the 20th century. At least we had popular music that didn’t regularly trigger my gag reflex. On the up side metal really is experiencing a Renaissance of sorts, great time for all us degenerates 😉 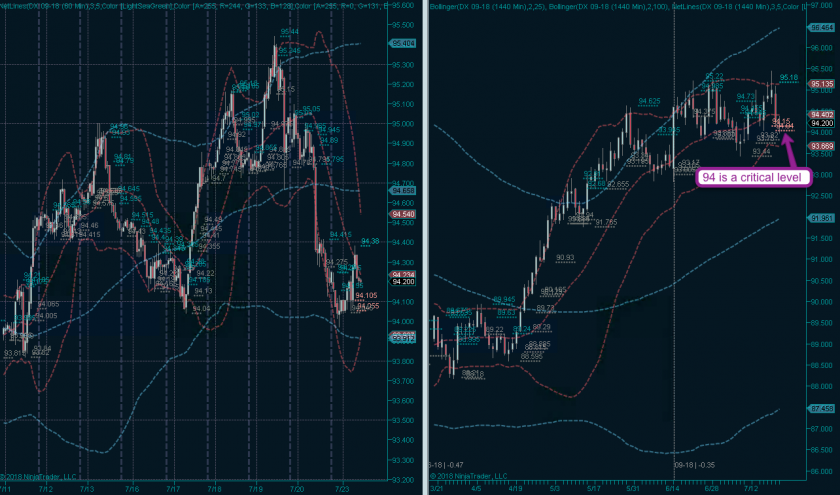 So Trump stomped on the Dollar again last week and the DX has now reached its critical inflection point near 94. A drop below that most likely rolls over a bunch of stops and will lead us back lower again. The snail race to the bottom continues across all fiat currencies. 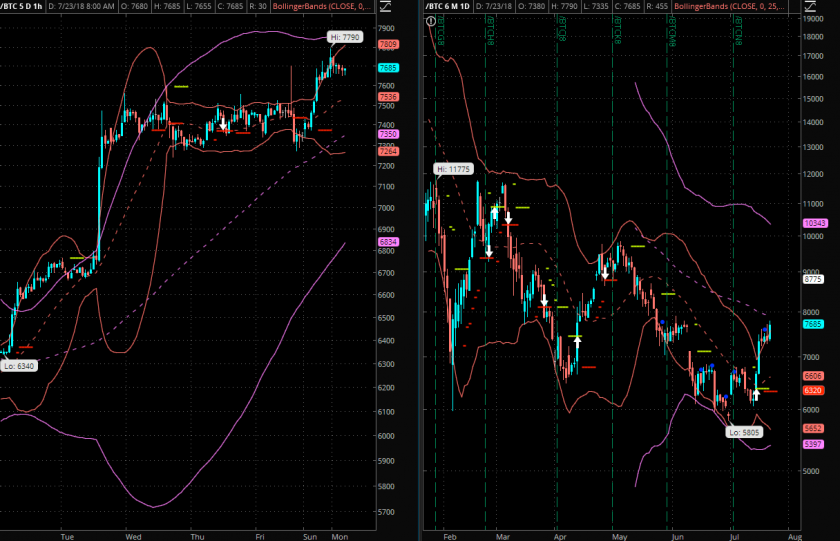 Perhaps I should start charging you guys in Bitcoin. It’s been strengthening over the past week but its big hurdle at 8000 is now in sight. Like with the Dollar this will be a crucial inflection point for BTC and a hop across could re-ignite some of that unbridled optimism that apparently seems to have disappeared since late last year.

IMO this has been a very productive period for BTC as well as other crypto currencies. I mentioned the Gartner hype cycle earlier this year and as anticipated then the entire crypto industry has been dredging through the valley of disillusionment ever since.

Although the current gyrations are painful and frustrating to most crypto aficionados the technical context that they produce will establish important technical support levels further down the line. So pucker up – not all is lost!

Anyway, I don’t see anything I’d want to touch with a ten foot pole right now. As a consolation: If you think you have it tough then just imagine being a financial blogger right now. This is probably going to end up being the toughest year for me yet, at least when it comes to keeping you guys entertained.