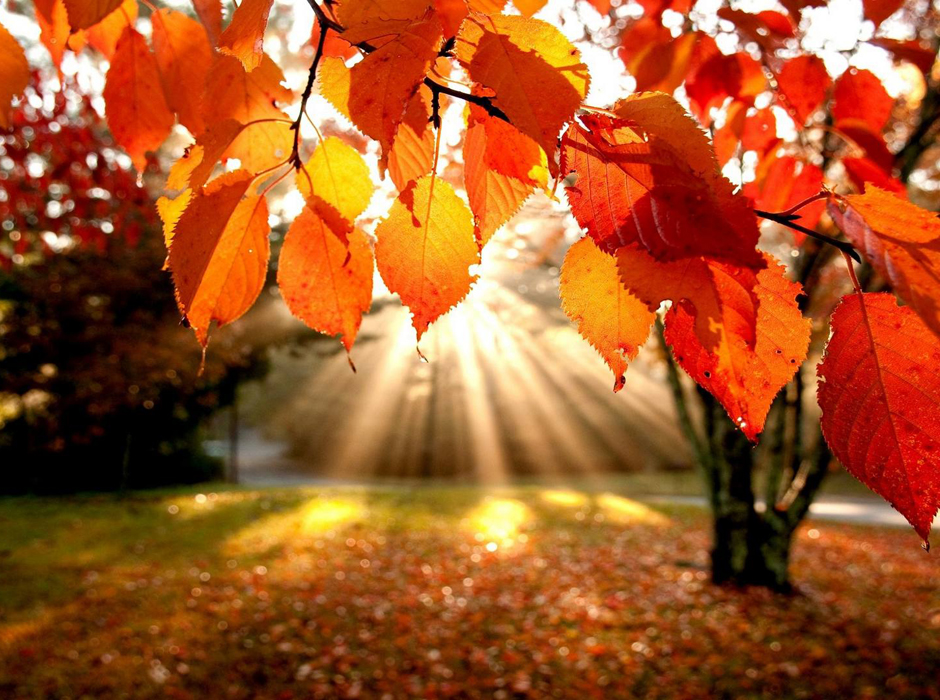 I’m seeing an increasing amount of bearish sentiment here in the comment section as well as across the financial media. Which of course is no big surprise given that we are smack middle in the most negative leaning market phase of the year. However just because a door is open does not necessarily mean the bear is going to walk through it. Let’s not forget that equity indices just painted new record highs all seasonal bias to the contrary. 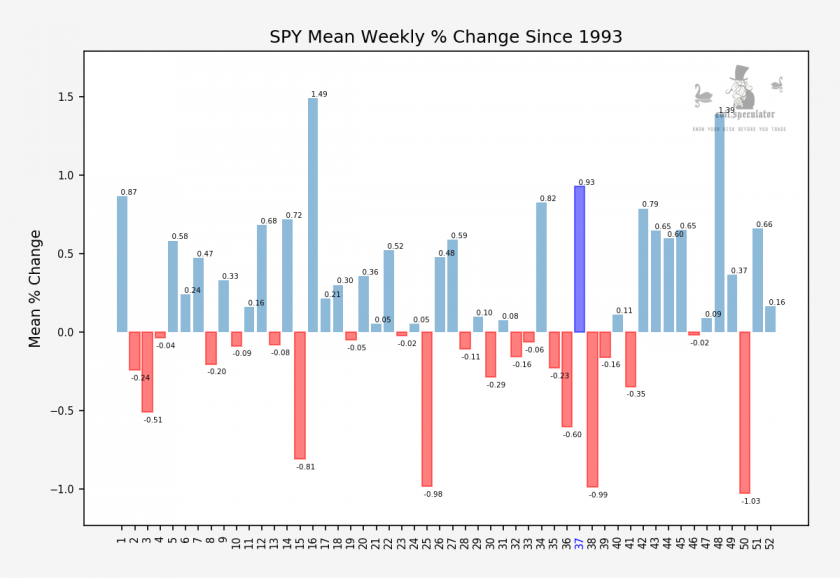 Seasonal statistics are after all just an exercise in probability based on prior events. If they were immutable then trading would be extremely easy. Very well worth noting also is that the current week (#37) happens to be the third most profitable week of the year. Which then is immediately followed by the second most bearish week of the year. 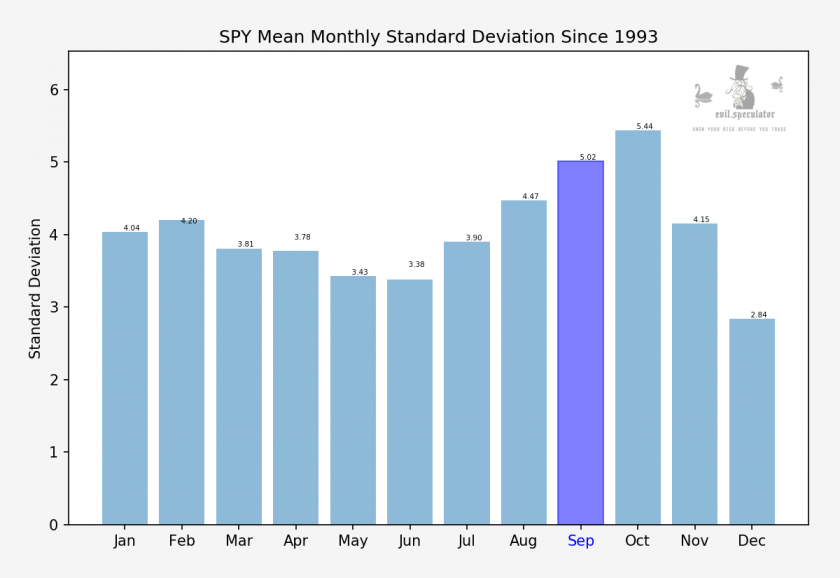 No wonder September ranks #2 in terms of standard deviation, only beat by October. By the way, if you are interested in pulling exhaustive statistics on almost any Yahoo finance symbol then head over to our new Evil Speculator Seasonal Statistics page. It’s still in beta and thus freely available to everyone. 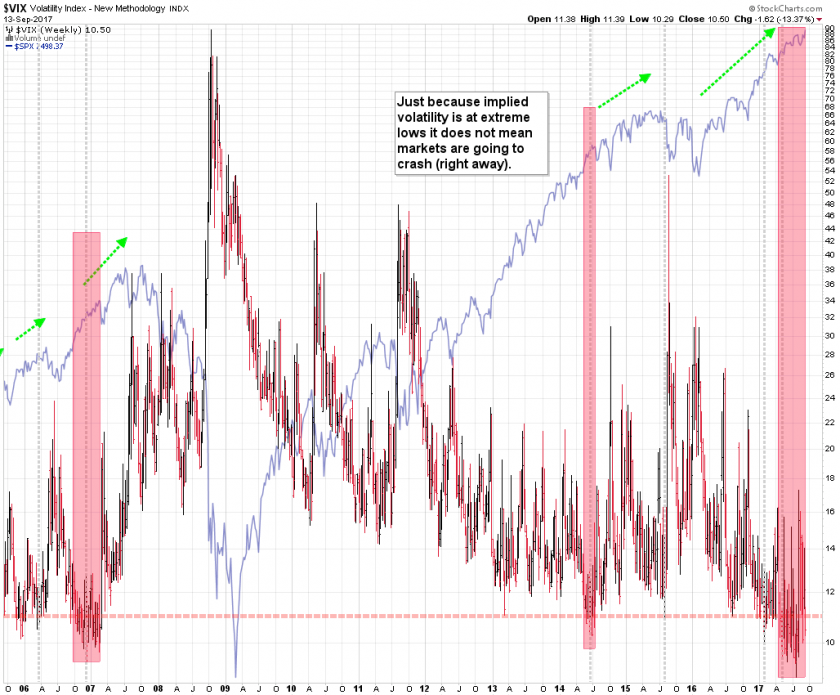 The VIX has now dropped back below my magic line at 11 and we are getting pretty close to exceeding the late 2006 into early 2007 period (almost 11 years ago – coincidence? probably). Investor confidence in this effervescent bull market remains unshaken and although we do see the occasional cracks any downside action is usually quickly reversed. Let’s talk about that a bit more: 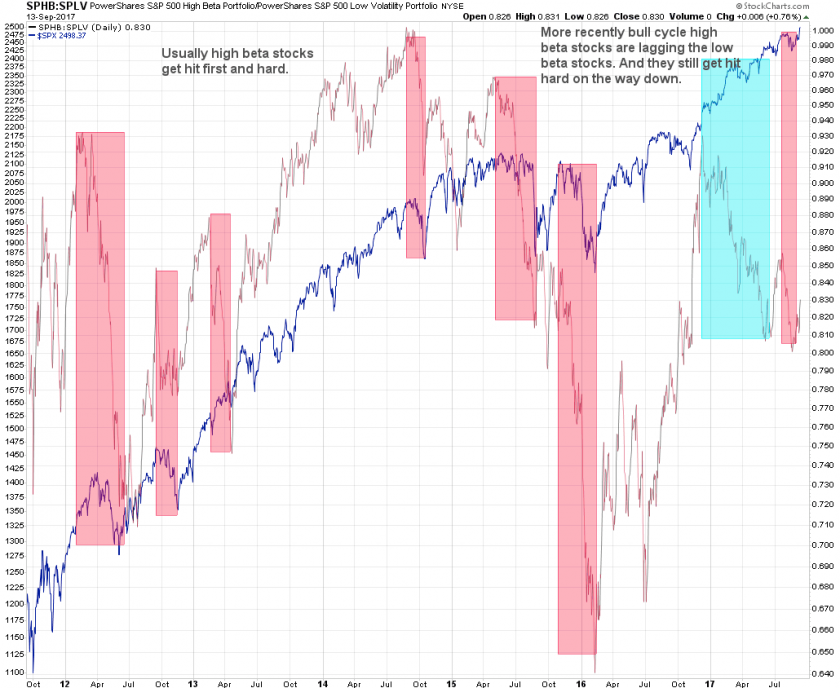 Something that caught my attention today was the ratio between high and low beta stocks against the SPX. Traditionally we see high beta stocks lead along with the S&P, but get hit first and very hard when downside finally materializes. It’s what we would expect of course and if something else happens, like it did throughout most of 2017 then we ought to take notice. The cyan field marks a significant portion of the current advance and clearly high beta stocks are either lagging or are outdone by low beta stocks. 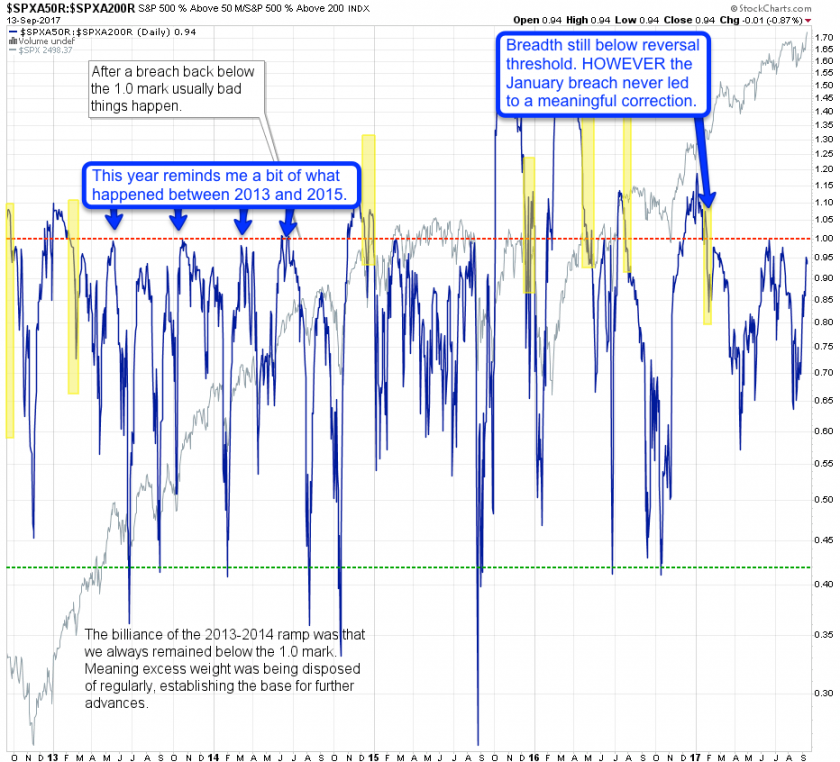 As you may have guessed already breadth was of course the very next chart I looked at. Which seems to be in a state of limbo right now as the ratio is pushing into elevated readings but is nowhere near where I would expect a more profound correction. Let’s also point out that the most recent upper threshold breach occurred early this year (after which we are seeing the strange high beta / low beta behavior) which was never followed by a truly meaningful correction.

So it occurred to me that we may be heading into a period resembling that of 2013 through late 2014. I posted this chart on several occasions in the past and my general hypothesis was that it carefully avoided extreme breadth levels for almost two years, thus resulting into a protracted advance higher.

Now let’s look at the VIX term structure for a bit more context on the medium term: