Whether or not they’ll label this a misprint post facto – that early morning spike on Mr. VIX perhaps was a harbinger of the nasty tape we’d be seeing today on the equities side. Which is a good segue into the situation on the volatility side – let me walk you through it: 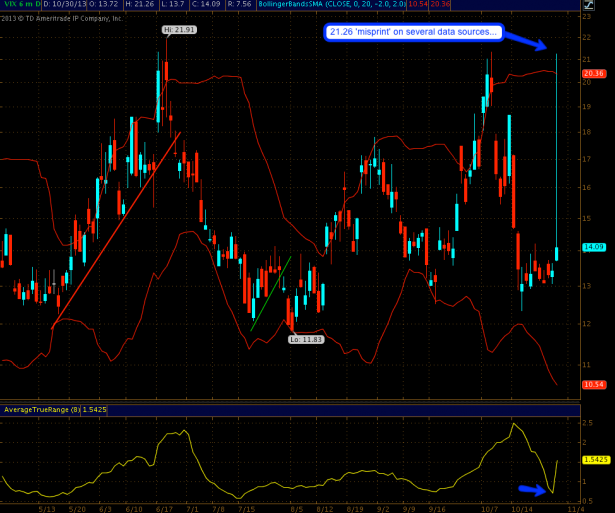 So first I thought it was just a TOS retail data misprint but I double checked it on stockcharts.com and my (much more reliable and paid for) Kinetick feed and both confirmed a spike to 21.26 today. Now when I suggested yesterday that we should expect a jump in volatility that certainly was not what I had in mind.

Fearless offered his own pertinent musings in the comment section and although I cannot confirm his suspicions I am still awaiting a proper explanation. Let’s not forget that the VIX is NOT a tradeable instrument – it is a continuously computed index which derives from actual bid offers on SPX listed options. Nobody ‘bought’ or ‘fat fingered’ the VIX here – one would have to buy or sell SPX options in order to affect the VIX price directly, or indirectly, buy or sell VIX futures. However, the sheer size and liquidity of both markets effectively rules out a short term market distortion such as this one.

In any case – we are awaiting clarification and I certainly hope it will be forthcoming shortly. Otherwise, how are we to trust any VIX print going forward?

UPDATE 3:21pm EDT: Here’s a link to the official “explanation” on Bloomberg. My take – a ‘software error’ – seriously? And it does not affect option prices? That’s just wonderful – but anyone looking at a chart may be tempted to trade that candle, especially if it is not a glitch that is so obvious (i.e. a rise by only a few percent). So the real question here is this – how often are we getting bad data that perhaps remains uncorrected? IMO this ‘explanation’ opens up more serious questions. Plus the nonchalant manner in which it is being offered and the fact that no further investigation is being promised along with the information deeply worries me. 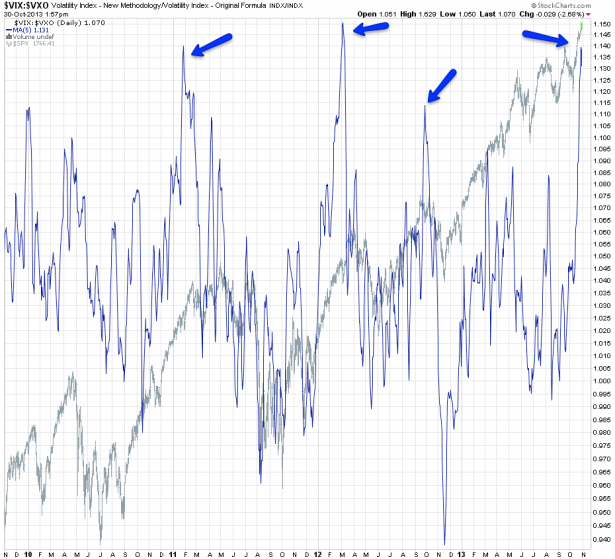 Now, in related news I would like to show you my long term VIX:VXO chart. If you’re unsure (a.k.a. oblivious) as to the difference of the two: The latter effectively represents the ‘old VIX’ which formula was changed in 2003 – here’s the pertinent announcement back when lifted right off the CBOE site:

What’s missing here is a detail you really have to dig around for. The old formula used (and still uses for the VXO) 30-day ATM (at-the-money) options, while the VIX uses 30-day options across the chain. And that subtle difference offers an important clue – namely when market makers are pricing ATM options either higher or lower against the entire option chain.

Congrats if you stuck around this far – here’s the sweet reward: Obviously judging by the chart above spikes of the ratio (i.e. a drop in ATM or a rise in OTM options) seems to precede market reversals. The timing is clearly on the soft side – it may happen weeks, maybe even months ahead of time. But it is something to keep an eye on as distribution (or accumulation of short positions) would happen ahead of time. 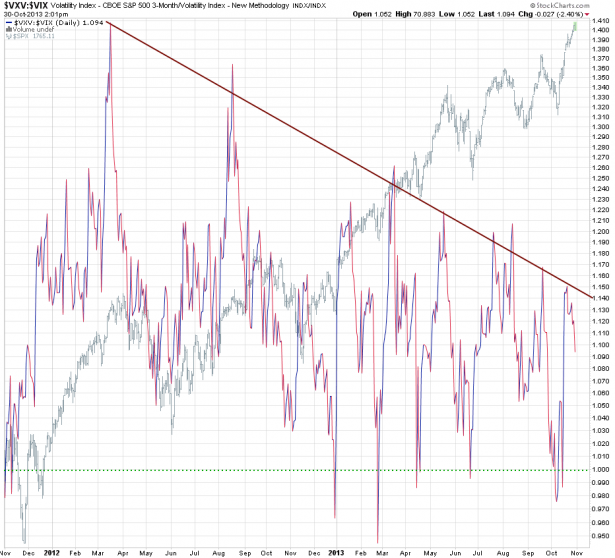 The VXV:VIX ratio however is comparatively muted – although there is a pretty clear falling resistance line which we’re approaching right now. In case you wonder – the VXV is basically a 90-day VIX, thus representative of the expected volatility three months out instead of just 30 days (as in the VIX or VXO). 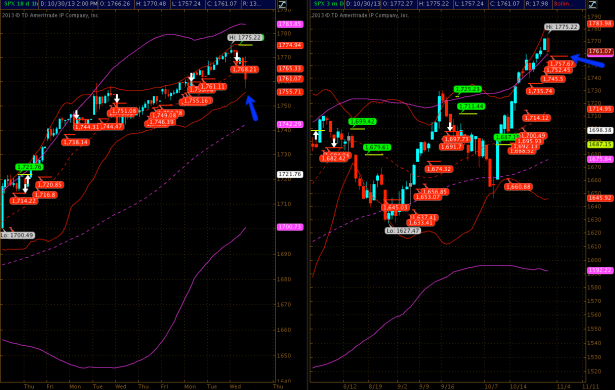 As they’re cleaning out some of the weak hands I thought I’d offer some plausible support zones. On the cash I’ve got 1756 which is the lower 25-hour BB – but quite frankly speaking it’s a rather weak one. That only leaves us with the daily NLSL at 1757.67 which seems more credible.

If nothing else this day confirms why I avoid being long in bot-driven tape like the one we’ve seen in the previous days. When the machines decide to throw things into reverse it can go ugly quickly – and quite frankly this still was a rather mild day by any measure.