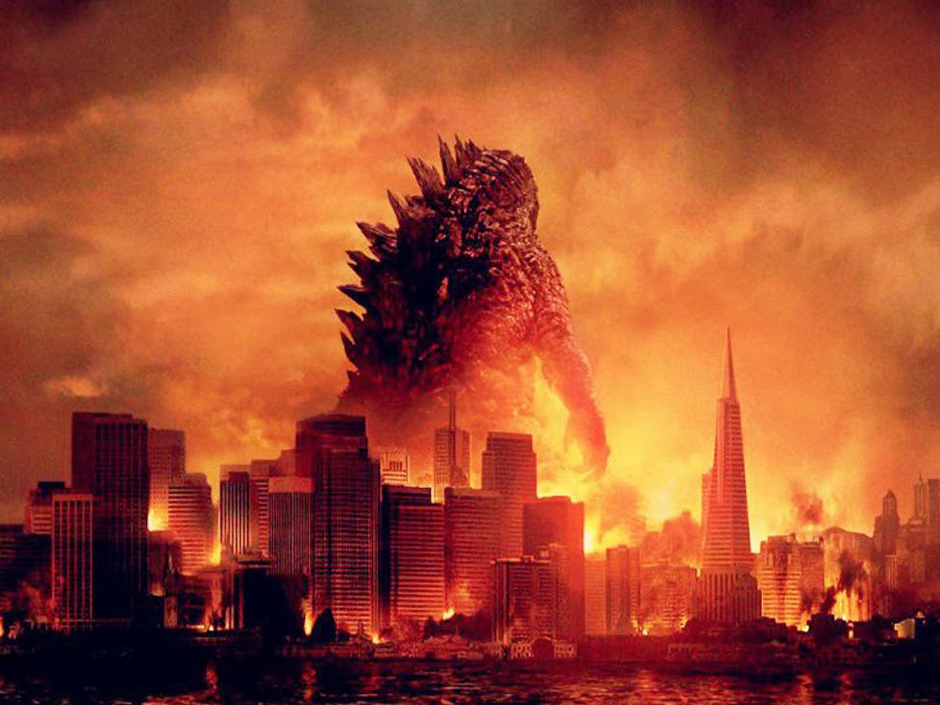 It has now become clear that we are not just traversing a minor market correction we should expect to blow over quickly and painlessly. With Mexico now added to a growing list of nations facing import tariffs into the United States, a growing sense of economic uncertainty and portfolio risk is beginning to take hold among investors. After a morning stroll through my collection of market momentum (mamo) charts I am unfortunately unable to find much reason for optimism, at least over a short to medium term perspective. 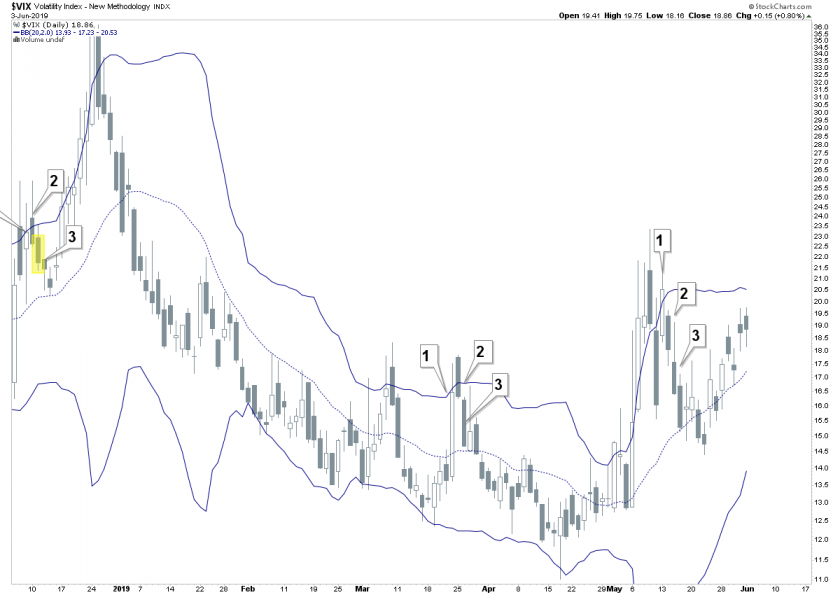 As you may recall the VIX triggered a bonafide buy signal (in respect to equities) two weeks ago. What happened next was slight advance on the S&P cash which however was unable to overcome the crucial SPX 2850 mark. 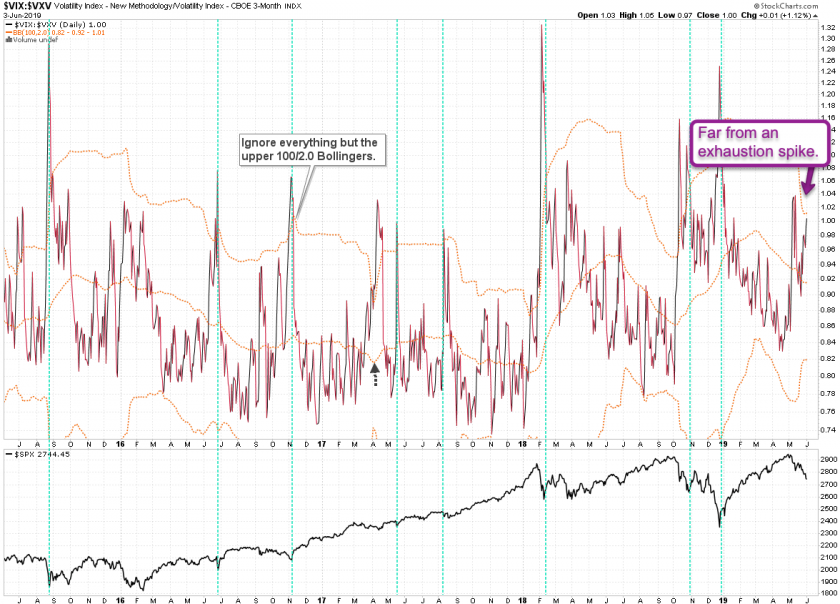 The Implied Volatility Term Structure (a.k.a. the VIX:VXV spread) has been on the rise but appears far from an exhaustion spike. Which unfortunately is pretty bad news for the bulls as a slow increase in IV usually is a lot more damaging to their medium term prospects than a quick spike that leads to dip buyers to draw a line in the sand. 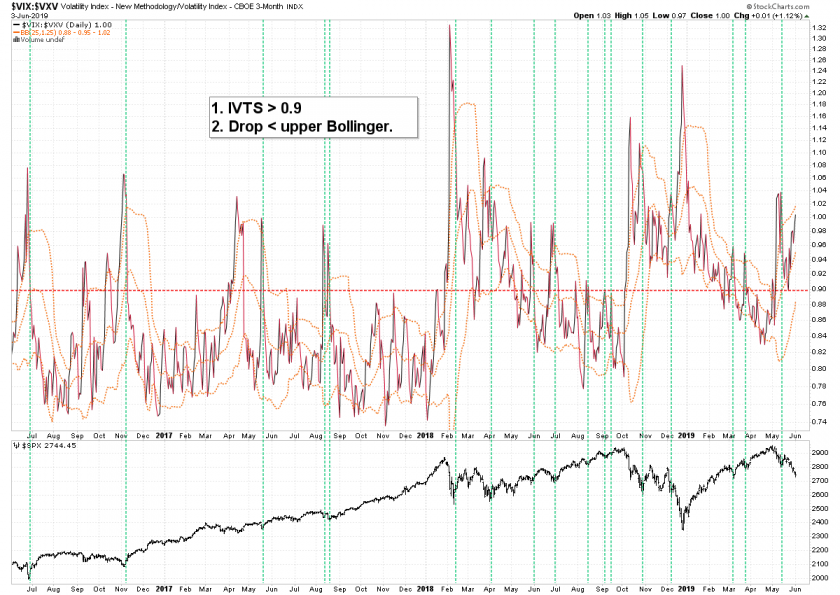 Here’s another perspective which attempts to catch a few more of the wiggles. My main rule here is that the IVTS must rise > 0.9 in order to open the gates of Hades for equity traders. Any considerable period spent below that threshold is usually considered easy time.

Quite a bit more waiting below the fold: 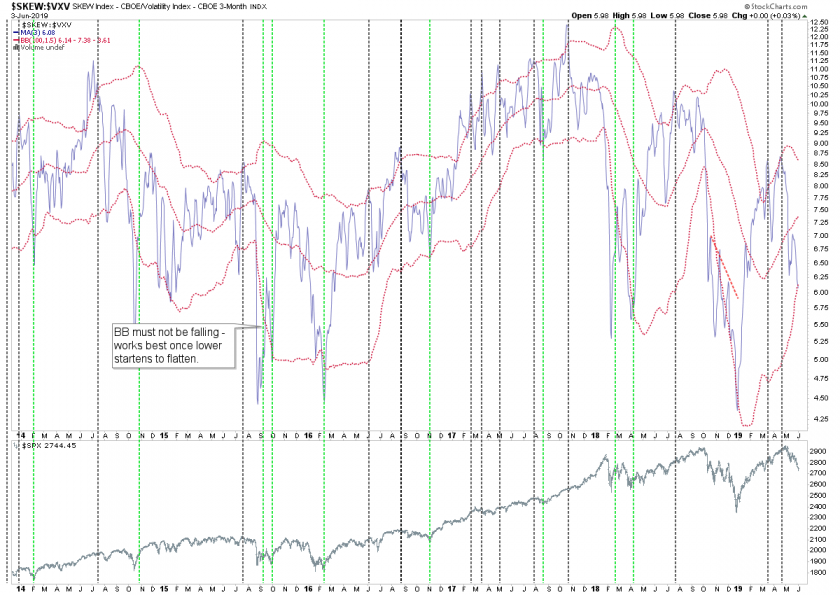 The SKEW index on its own unfortunately is pretty useless (sorry CBOE) but in correlation with the VIX it does offer us a bit of insight when it comes to risk perception. Any push > the upper BB eventually leads to a significant correction although they can come delayed, as they have over the past years.

The bounces are harder to call as I usually ignore any drops below a falling lower Bollinger. Now as you can see the BB is still rising on both the top and bottom, so my hope is that we’re getting a pop higher in the coming week or so. 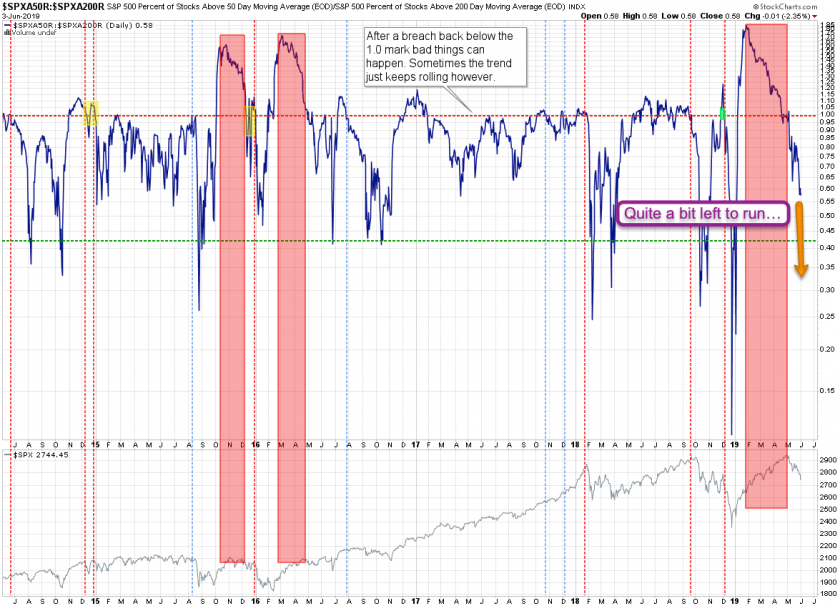 The breach below the 1.0 mark on SPX market breadth was an early warning flag that we were looking at a medium term correction. Since then it has continued to drop but we are still far from a possible signal bottom here. It usually gets a lot worse before it finally gets any better again. 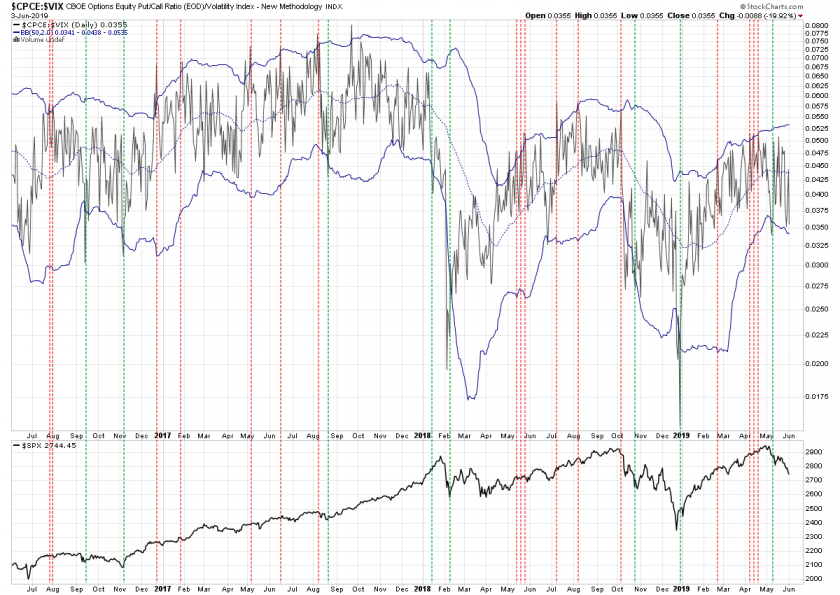 CPCE vs. the VIX: Similar situation – there was a long signal in early May but it was only good for a quick spike higher into SPX 2850. The Bollinger is now starting to drop lower and that will prove problematic for interpreting future long signals here.

The take away message is that once a sell off is starting to pick up steam, volatility and risk perception begin to feed off of each other. The increasing downside drag requires a lot more energy to be overcome, and usually it only happens after a very decisive and deep drop lower which has high odds of representing a floor pattern. 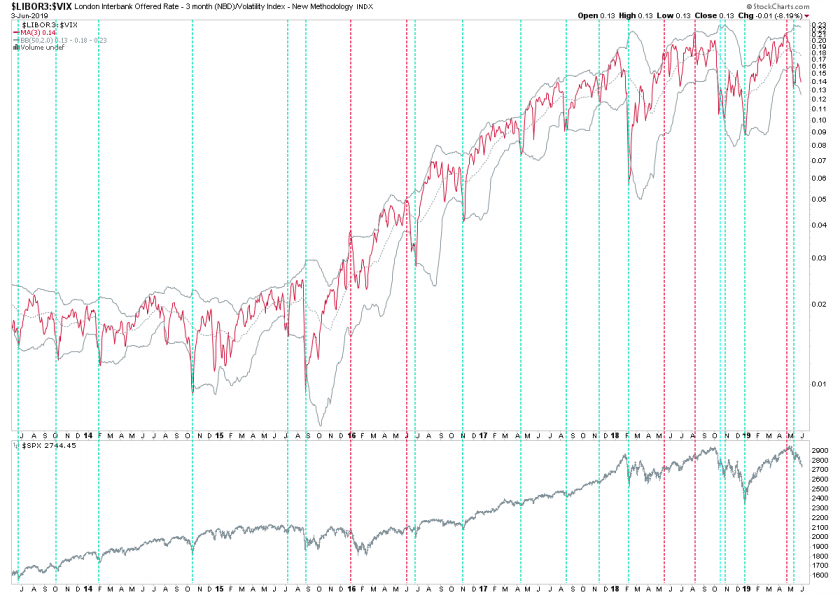 And just like previous measures it did correctly suggest a buying opportunity in early May. Now we are however looking at a falling Bollinger as well, and that’s pretty bad news – just as it was in late 2018. 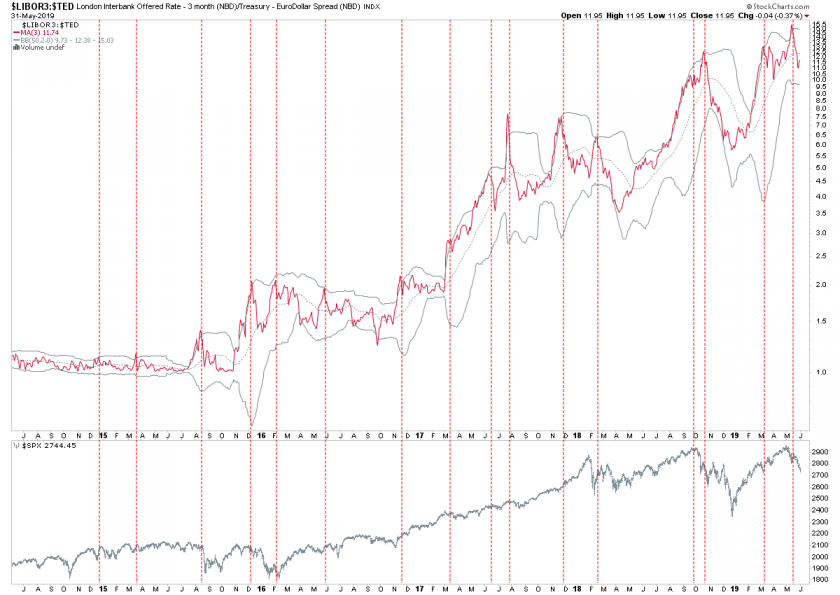 This is a new one I’ve started to play with – 3-month LIBOR vs the TED spread. Tougher to read as the signal seems to often get embedded > the upper BB. However a drop back inside that lasts more than a few weeks appears to be a good harbinger of corrective forces ahead.

I wouldn’t use it for long signals but in correlation with some of the other mamo measures above I think it’ll be useful. 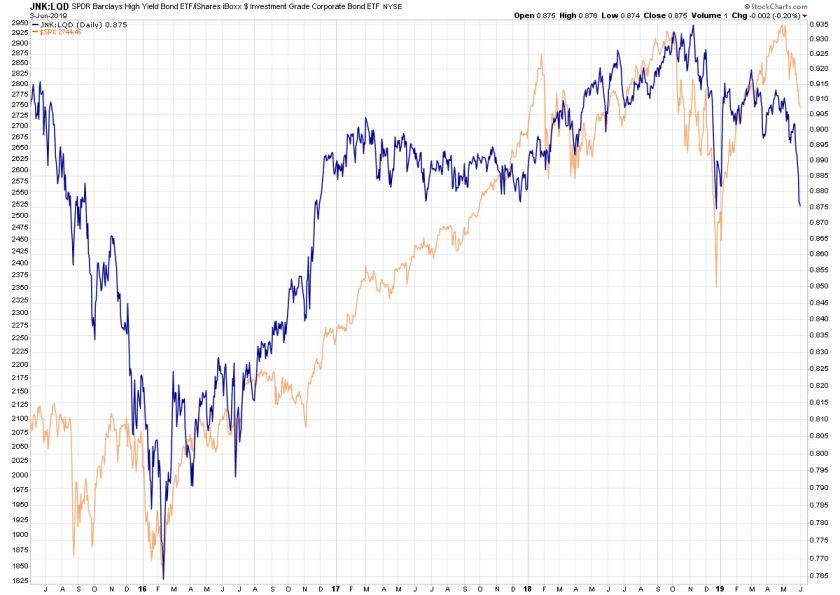 Not surprisingly investor appetite for junk is dropping rapidly. Here’s JNK vs. the LQD which is leading the SPX lower. 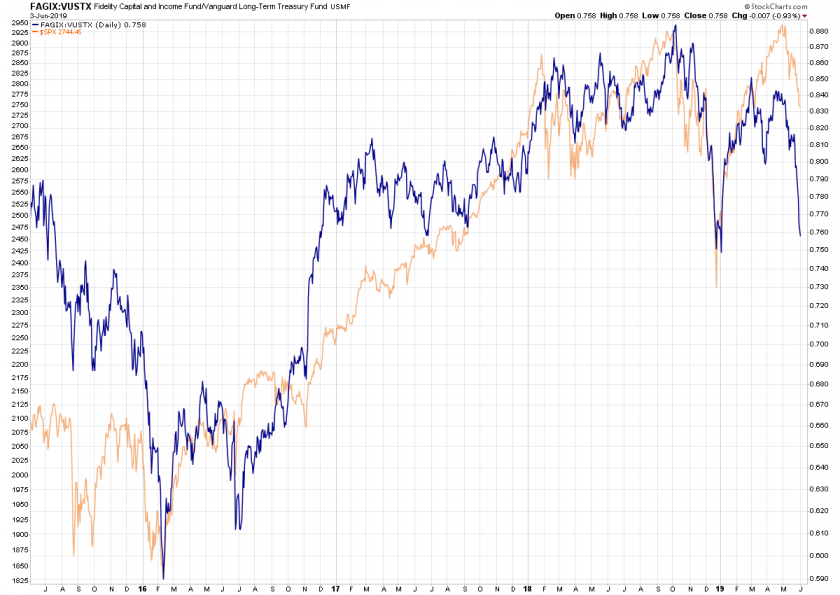 FAGIX vs. the VUSTX is looking equally bearish and I am staring to wonder if we are looking at a possible return of ZIRP again. Trump continues to push for it and, all politics aside, he clearly wouldn’t face a lot of resistance from Wall Street.

I think we are looking at a very frosty high volatility summer here. Cash is a position.