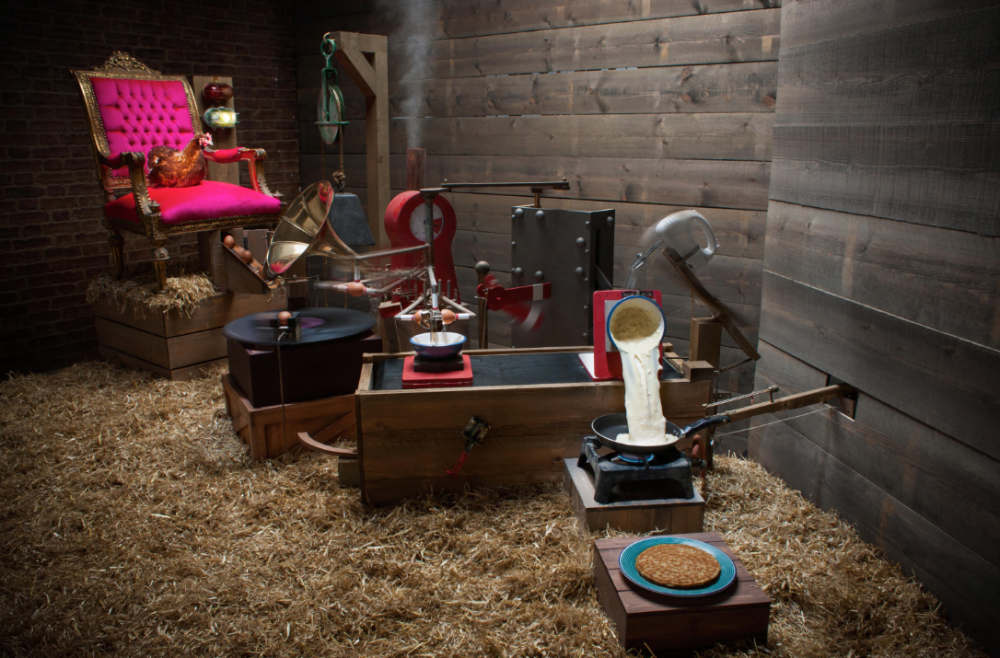 We seem to be reverting toward Friday levels across the board with equities still holding most bullish. Instead of trying to guess which next turn this hare from hell may run I thought it to be more productive to put together another momo update. What I finding is rather surprising as it’s either very bullish or very bearish, all depending on how this week resolves. No worries – I’ll walk you through it step by step: 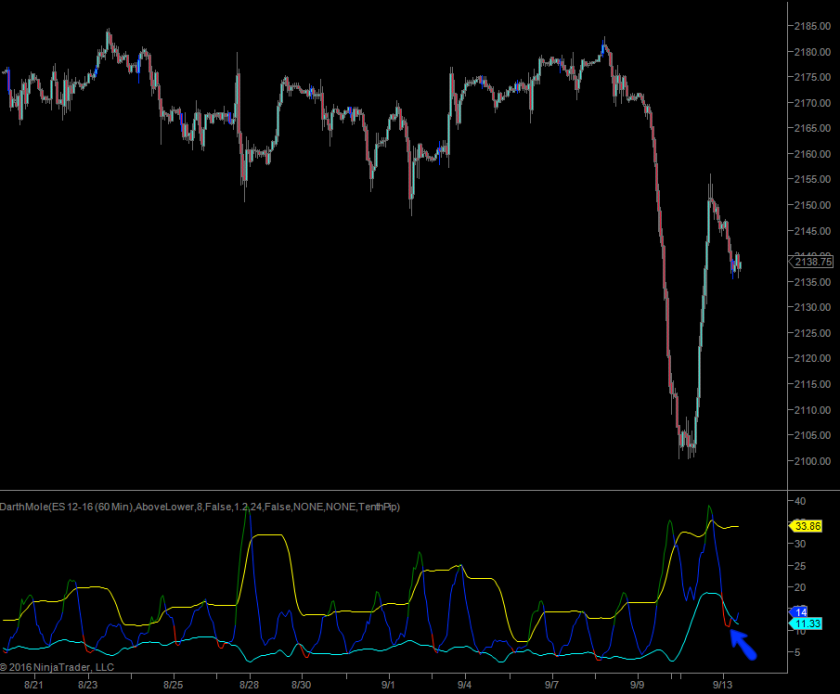 Realized volatility has been extremely revealing over the past few weeks. First we started seeing it mainly on spikes to the upside, which was of course rudely interrupted Friday when the bots flipped on a dime and started selling everything but the office furniture. Equities, bonds, gold, silver, crude – everything had to go. If you look at the price pattern on the hourly then it becomes questionable whether there was any human trading action involved at all (no we retail schmucks don’t count).

Then yesterday we got the exact inverse – everything was bought back at discount and we almost filled the entire route down painted last Friday. And now everything is once again weakening but there’s one big difference – the tape is starting to look relatively ‘normal’ again. And by that I mean some red candles followed by a small retracement followed by more red and then an attempt to build a base. It seems like the bots are done playing their games – for now.

Clearly there is a lot happening behind the scenes here that we are not privy of and about which I do not care to speculate. All I know however is that this most definitely not the picture of a healthy market and that in turn is the reason why the alert level in the evil lair has been switched into Defcon 3. I strongly advice all of you against taking any large positions, as a matter of fact I suggest that you keep a majority of your assets in cash. You have been warned. 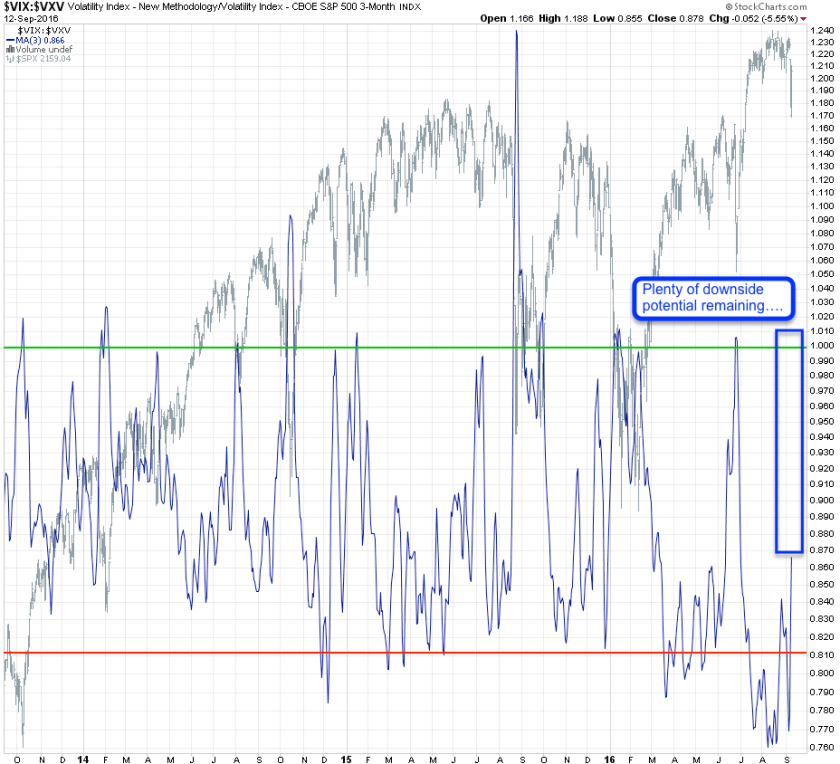 So let’s talk a bit of momo, starting with the VIX:VXV ratio. In terms of bearish potential we’ve got a lot remaining but judging by the signal range between March and June those conditions can sustain for quite a while. Which brings me to what I briefly touched upon in my introduction. It’s possible that this was it and we once again continue to curl around above the lower trend line. But IF things descend lower from here then the potential for continuation is considerable.

And that is the double edged sword of these types of surprise moves. They do clear out some bearish potential on a short term basis but they do not produce conditions that invites significant buying interest on a medium term basis. I hope that point comes across, as it is crucial. 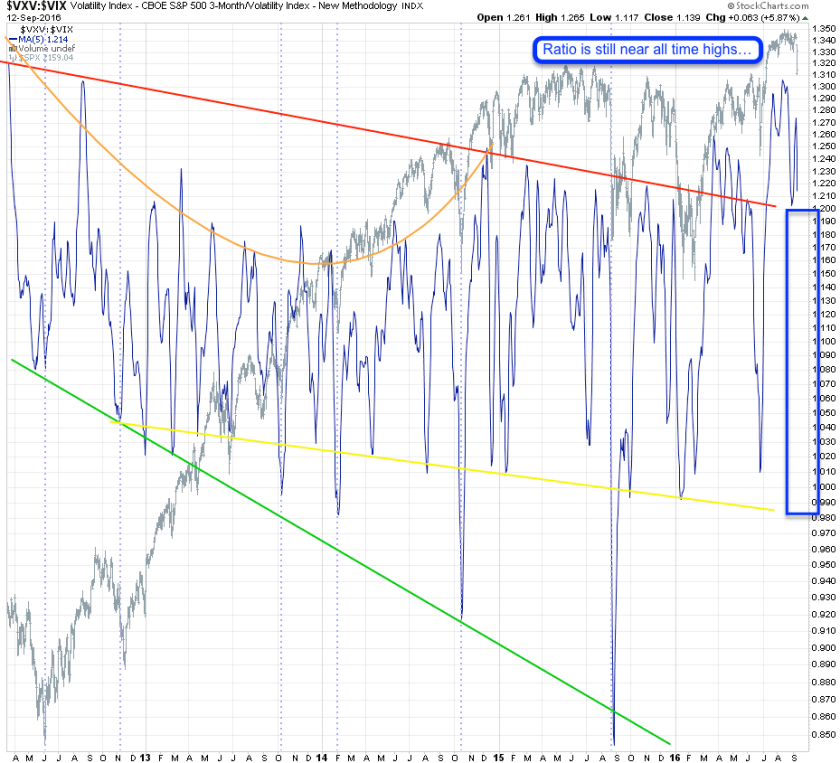 Here’s the inverse VXV:VIX – I like various perspectivs on this one. We haven’t been pushing a ratio of 1.2 plus for more than a few days for a long time. Usually we get one big spike > 1.2 and then comes the sell off. That situation started to change earlier this year and given where we are economically, geo-politically, and a tiring bullish trend an extended signal range like this is actually quite brazen. 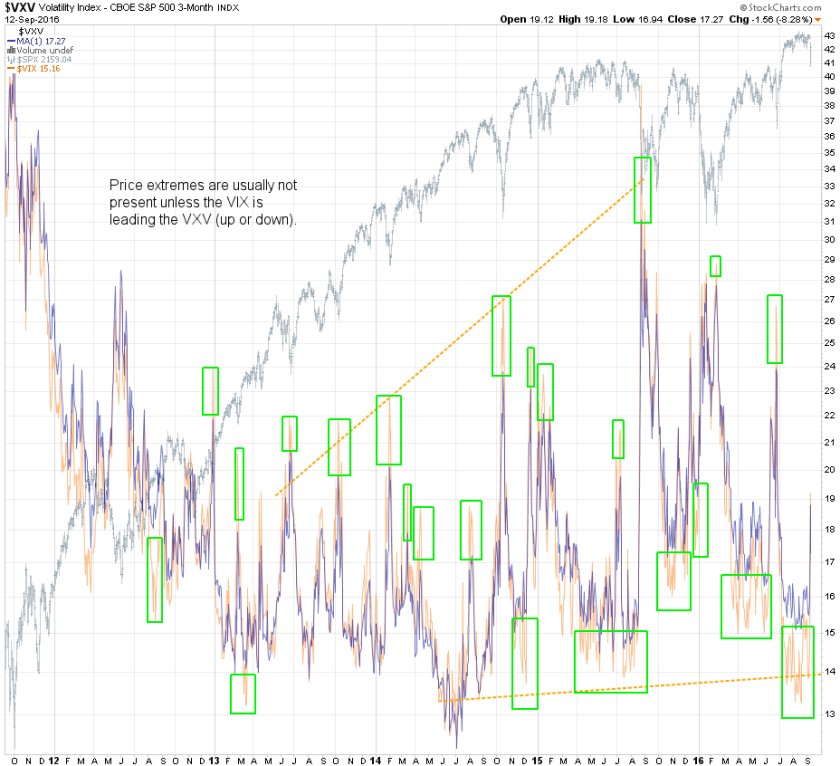 I noticed something on the VXV to VIX overlay that I never really fully expressed and appreciated before. Namely that price extremes to the up or down side were usually accompanied by the VIX leading the VXV. I know that this is not reliable predictor but if we start seeing a spike (up or down) followed by a reversal then it’s possible that either a high or low is in place. For now I do not see a distinct pattern that would suggest that this sell off has run its course.

And here is where it gets interesting…