There seems to be a scripted HFT routine dominating the NYSE session as of late. Basically we get a little gap up, followed by a dump and then a recovery and new highs late in the session. Well, it works until it doesn’t – at least the non-confirmation signals on the Zero Lite have been rather valuable in calling out any intra-session sell offs. Otherwise it’s been flat-line all through January and until today – very unusual tape in my recollection. 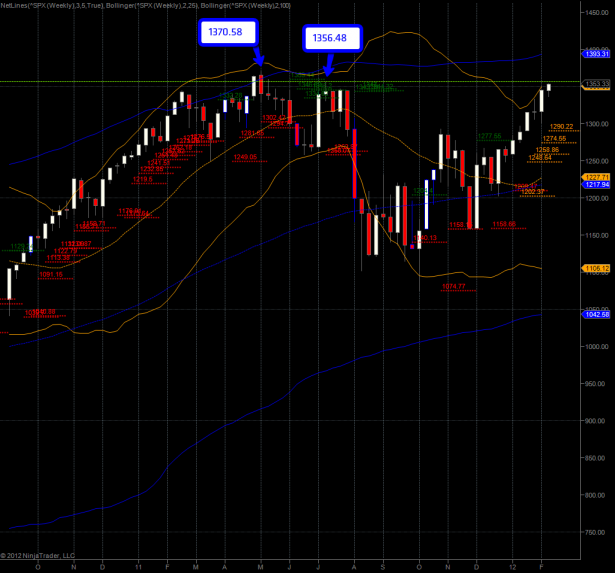 But as stainless steel rats we are not to care how we got here – what matters the most is that we are now approaching the moment of truth – and indubitably a cluster of stops looming above the two inflection points in close succession. 1356.48 is merely a few handles away and is closely followed by 1370.58 – last year’s top on the SPX. I think the odds of bouncing here are mixed and I would slightly favor the bulls on this one. Why? Let me show you – I have collected a boat load of evidence: 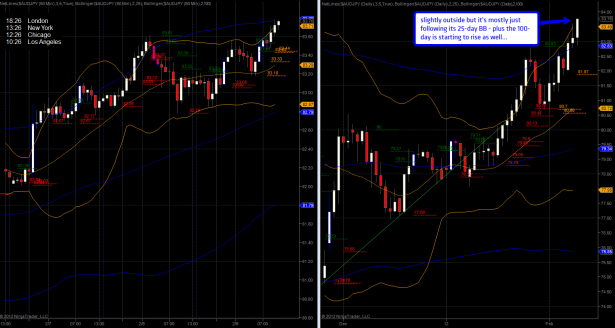 The AUD/JPY remains to be a pretty good guide on what to expect on the equities side. And clearly there is little holding it back at this point. Yes, we are now outside both BBs but we may yet close inside the upper 25-day BB line before the end of this session. And even if we get a few days worth reversal – both BBs are pointing up now, indicating that buyers will most likely step in near 82 (i.e. the daily NLSL), should we get a little sell off. 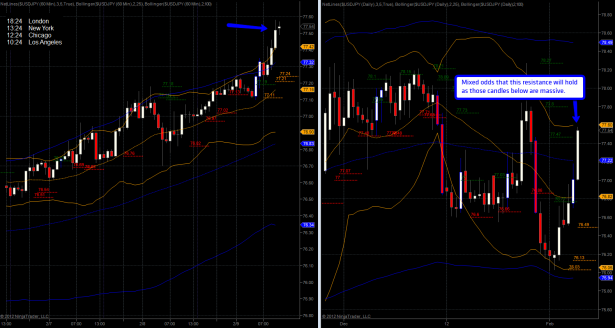 And here’s the USD/JPY – which just pushed up massively putting us nicely into the green, way exceeding my expectations for T1. I would take profits here but keep a few lottery tickets for a push into 78.40. It’s possible we see a reversal here of course, but if we push higher then T2 here we come. 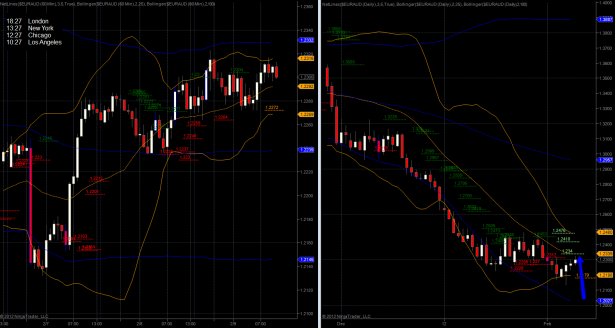 EUR/AUD – señor cabrerra’s favorite pair – by the way he’s been MIA lately. I pointed this one out a few days ago and it’s most definitely trying to paint a floor here. As you know I am waiting for escape velocity once we breach this compression zone. In any case – if it breaches higher that’s also bullish for the EUR and thus bearish for the Dollar, and ergo bullish equities. 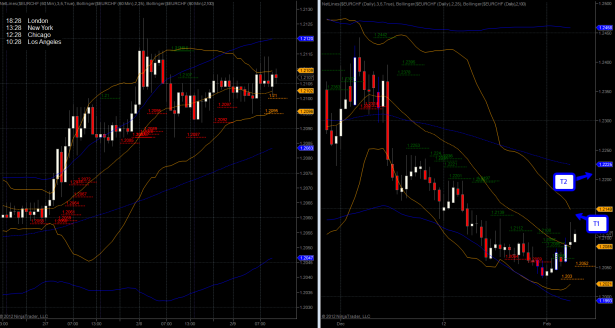 A quick update on the EUR/CHF – also looking rather bullish and it’s moving in the right direction after trying to shake off some weak hands yesterday. I think we should be good here until 1.21. 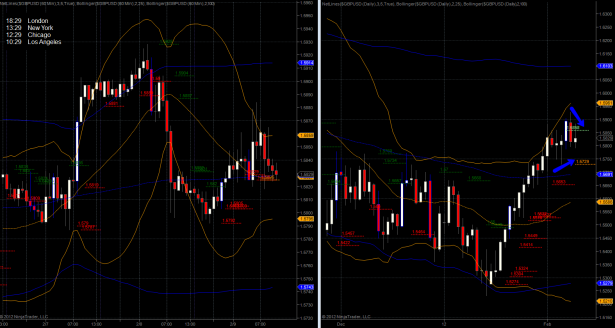 Cable is next – and it’s being denied at its current NLSL. What’s interesting here is that little Net-Lines box which may be good for a few swing trades. If we push above 1.59 then I see you at 1.61. Again, that would be bearish for ole’ bucky and thus give equities a nice tail wind. 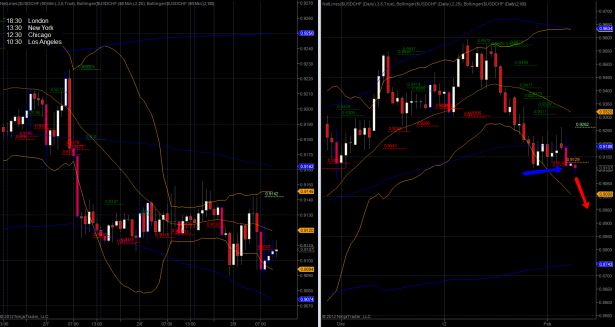 USD/CHF – looking bearish as hell here – we just breached the only NLSL on the books and unless this thing reverses quickly I think we are dropping through 0.9. Maybe I should charge you subs in CHF going forward 😉 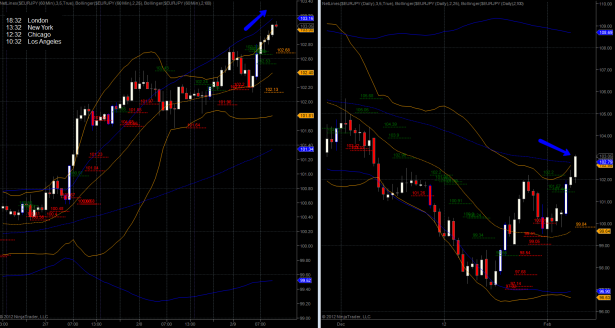 EUR/JPY is doing what I hoped it would do and that long entry at 101.57 is starting to really pay off now. This is a very bullish looking chart and there’s nothing but air above until 108+. Well, you get the theme by now – bearish for ole’ bucky and thus bullish for equities. 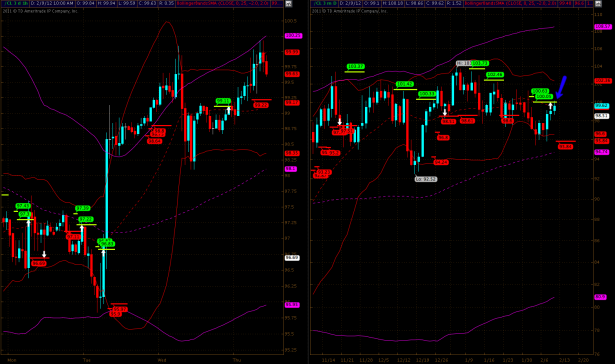 But I’m not done with you just yet – crude is tickling its NLBL and also its psychologically important 100.00 mark – traders like round numbers for some reason. There’s also the 25-day SMA and all that should serve as mucha resistencia. I would be short here but reverse that trade immediately after being stopped out a few ticks above that NLBL. Great setup with minimal risk and nice pay off in both directions, probably within one week as that 25-day BB is narrow. 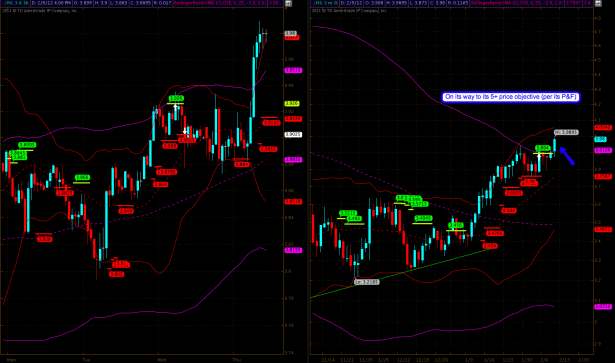 Copper – also broke above our NLBL and the 100-day BB line resistance, which now will serve as support going forward. And both BBs are starting to point up now – so it’s looking pretty bullish. 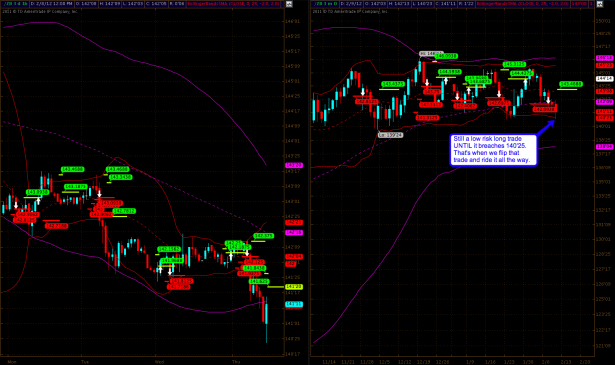 Bonds – now hanging on the line of scrimmage – this is a great long trade until it turns into a high yield short trade after a breach of 140’25. Great great setup with minimal risk exposure.

Given what’s going on all across the FX side as well as in copper I would be extremely cautious about trading the short side over in equities. Have you noticed that the VIX is creeping up while we push into new highs? Very peculiar and in the past I would have speculated that a reversal is looming ahead. Maybe so – but if it comes then it’ll be a quick shake-out and a nice buying opportunity. But the good news is that we should know for sure in a few handles – once we breach 1370 it’s all over for the bears. Any dips thereafter are mere BTFD setups.

UPDATE 2:45pm EDT: I’ve got a quick bonus chart for everyone – going to let this one run for free: 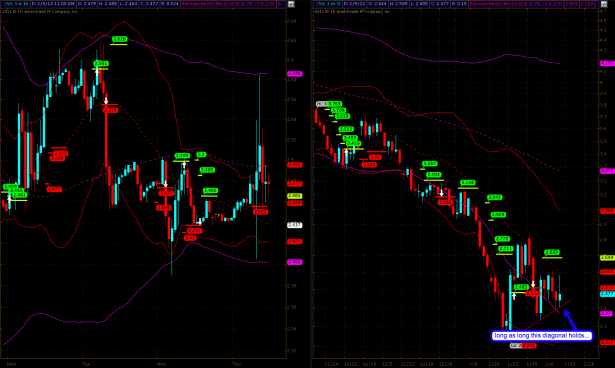 Natural gas futures – it’s been a long and painful sell off for NG producers, up to the point where it’s becoming unaffordable to run their wells. As you know I’m not a fundamental trader, thus I don’t care about all the ins and outs of the NG market. What I do care about however is that diagonal that has formed on my chart and currently suggests we may be establishing a floor. Whether or not it’ll take off the very first time around is questionable but it’s a good setup with little risk as we can put our stop just a few handles away.
Cheers,