I am sure that many of you reading my posts have had their share of bearish frustration in the past year or so. It’s tough to be a bear – especially in bear markets. Now, I know this may sound a bit counter intuitive but think about it. In bull markets you actually get pretty orderly retracements. Those insane counter spikes we’ve come to loathe in the past few years are not the norm in bull markets. Yes, instead you get long drawn out spurts of gradually climbing tape – but once conditions are ripe for a fall you know what to do: Which is to go short – take your lumbs after a small retracement – and then go back into hibernation.

Take bear markets on the other hand. First up a majority of the bears are usually way too early in getting positioned. Many aspiring grizzlies are foolish enough to step in front of a bus packed with bulls fuming on steroids and get dragged down a dark offroad track for a painful lesson in why not to fight the trend. When they finally get their day it’s often right after a short squeeze rally that forced many bearish participants into insolvence or at least inflicted enough psychological damage to not get positioned at obvious selling opportunities.

Then there are the trend chasers who after missing out on getting positioned (for reasons mentioned above) and then watch the tape descend into Hades without having any skin in the game. They will invariably hope for a bounce which never comes – or grab one too late which in many cases turns into yet another short squeeze rally, further depleting their capital.

Only a small minority of bearish participants have the skill and mental fortitude to actually make it through a secular bear market and a majority of the teddy bears are being killed in battle.

Yes, only unconventional ‘naughty bears’ will be left to tell the story. How do we do it? Simply – we are smarter and better equipped than those teddy bears. Plus we are a lot more evil and can smell a bear trap miles away.

Today I’m going to dispense with my usual flood of long term charts. Quite frankly – many of them are in complete limbo right now and won’t really help us much. So why look at them? Instead I am going to focus on one chart that has been exceptionally accurate in calling bear traps – and I think I have been able to squeeze even more charting goodness out of it. Take a look: 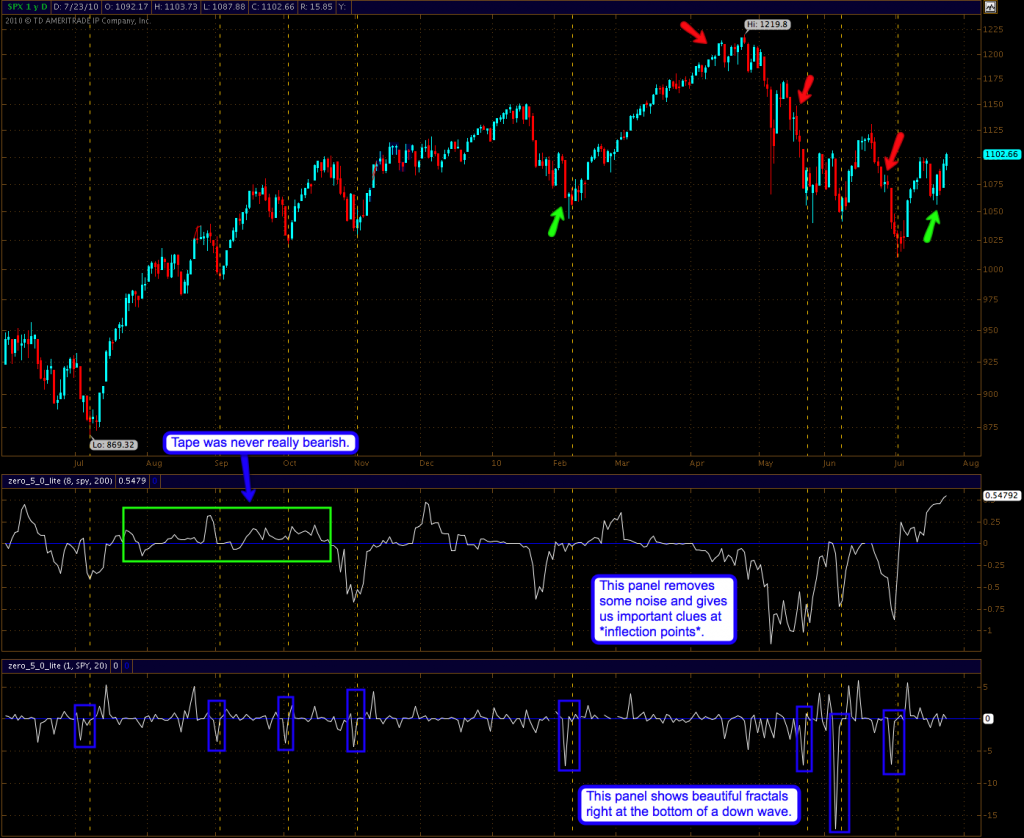 Some of you might have guessed it ahead of logging in – today we are going to go over the daily Zero chart with a fine toothed comb. The longer I look at this thing the more I see and I am starting to think that we may only have skimmed the surface here.

First up – in case you are a n00b or joined recently – the lower panel is what Zero subs have been looking at for the past few months now. A few months back I started to notice a particular fractal pattern which seemed to appear at the lows of downside market corrections. The pattern is basically a large spike down (when compared with prior signals) accompanied by dropping prices, then push up to the zero mark which is accompanied by even lower prices. A textbook divergence fractal and over and over again it showed up at the exact lows of bearish reversals. Something to take to the bank.

So far so good. When studying the signal in more detail however I also realized that there was a lot of data there which offered important clues from a sheer medium term trend perspective but was pretty hard to read. For instance – take a look at the period in late April on the bottom panel. Just by looking at those downward spikes it was quite clear there that we were dealing with a topping market and that a reversal was in the works. On the bullish side we seem to get distinct ‘bull period gun shot spikes’ which occur at the onset of extended rides up. Then there was the August through November period which bestowed us with three downside fake outs in succession (i.e. the bears thought that P2 had completed on every drop down) – however if you look at the Zero signal on the bottom it should have been clear to us that those tiny spikes down were not the onset of a new primary wave to the downside. Of course back then those spikes probably looked a lot bigger – keep in mind that the new signals were not present yet. It’s all relative after all and hindsight is always 20/20.

But still – we should have known better.

Why? Because when you remove all the noise what you get is a much clearer picture. And how do we do that? Well, there are many approaches but I chose to simply average the data out a bit via an 8-day SMA (I like fib numbers). Welcome to my new Zero panel, shown in the middle. All of a sudden a few things literally jumped out at me. The August – November patch is now clearly a whipsaw which was part of a wave up. The bottom of the February drop also shows some very weak momentum right when we get the green fractal on the bottom panel.

But there is more and it relates to the mental anguish Elliotticians find themselves right at the inflection points which occur at second waves of Minor degree and above – let me illustrate: 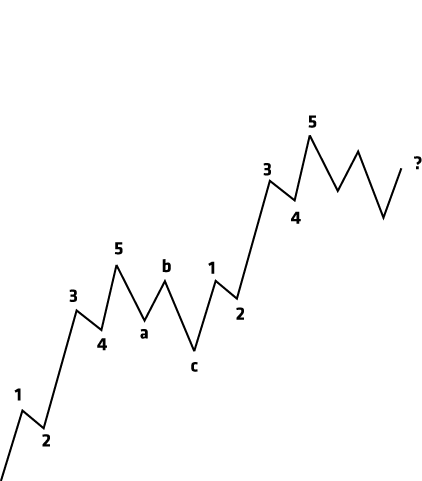 This is a simplified wave pattern and I have left out the labels at the most recent drop to the downside. Based on this wave pattern and knowing all the EWT rules – where do we go? Up or down? 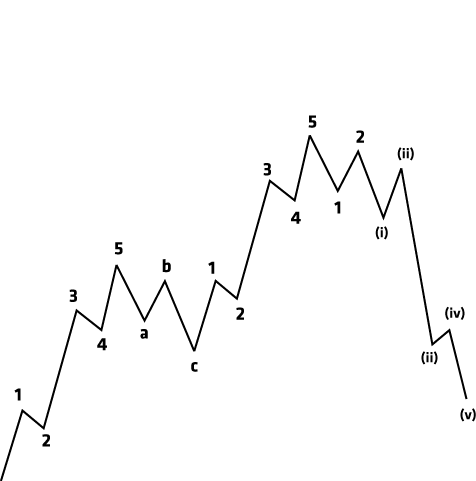 Bearish pundits usually predict this scenario of course. Especially once momentum has taken a turn to the downside. Here the final wave turned out to be a third wave sub-division (a 2-of-2) which was followed by a steep drop. The stuff bearish dreams are made of. 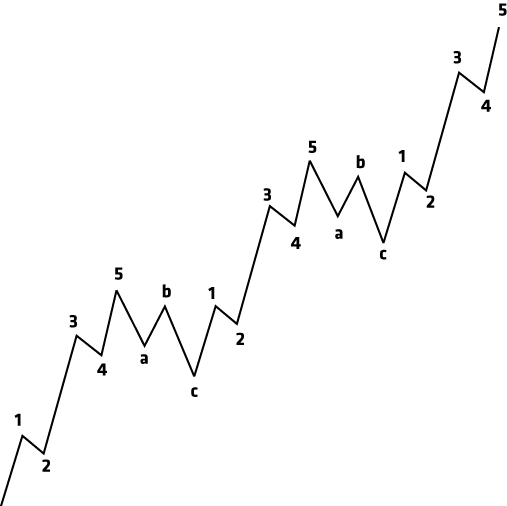 Here those three waves were nothing but an a-b-c correction and it was followed by yet another motive to the upside. This is the sort of stuff bear traps are made of. Ouch!

Now, if you take another look at the middle panel of the Zero chart then you will see that this view was solidly bullish while we were still debating whether or not this was Soylent Blue or Clockwork Orange. Once the noise of the lower panel was removed the daily Zero pointed toward the upside and thus far it seems it was spot on.

The inverse situation was happening around May 17th – we again had been dropping and then stopped with a doji. Were we about to drop further or was this just a quick drop before another spike up? Well, despite a pretty hard run to the upside after the ‘Fat Finger Freddy’ news made the rounds the medium panel had us stubbornly in bearish territory. And it proved to be right.

Well, there are many more of this sort of clues on this chart and I challenge you all to start looking for them. The medium pane will be added to your daily Zero updates going forward. I hope this will give us an extra edge in determining the long term trend. Zero subscribers should rejoice – I think this is an important step forward in our quest for market domination. 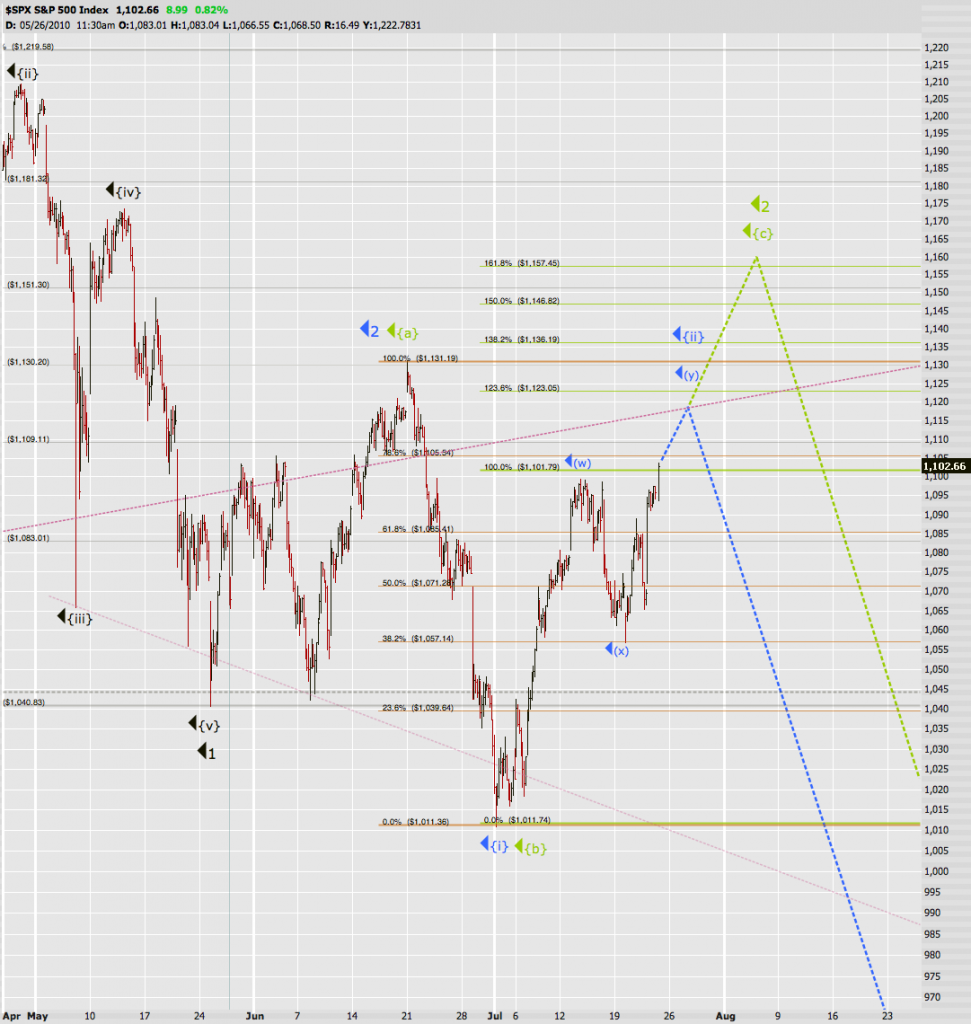 Now that you understand some of the momentum stuff I am looking at my recent and mos stubborn suspicions about Soylent Blue may be more clear to you. Thus the wave count chart above does not require much explanation. We did breach the mid July highs which means we probably resolve up to that diagonal, which you may recall is long term resistance. From there it either deflates like a soufflé or we breach and push into Soylent Green. I don’t think that the latter is too unreasonable in terms of probabilities, stay frosty and you’ll be ready to get positioned for some late summer fun.