It’s pretty much official at this point. Despite having strong seasonal winds in their backs the bulls were unable to stage a proper Santa Rally and got stuck at the diagonal resistance line as shown on the monthly:

Unless we rally like gangbusters tomorrow’s session will end a very volatile year nearly at zero. We started the year at SPX 1257.62 and are currently trading around 1263 – wow, that’s almost four handles in twelve months! Smashing baby, yeah!

In other words we are painting an annual doji, and if you consider inflation then you actually lost money holding it in US Dollar dominated cash or treasuries. Of course that is not what we stainless steel rats were doing and we are better off for it. Despite the fact that it’s been a brutal year we came out swinging the other end. If you were along for the ride and are seeing green in your account then be bloody proud of yourself as you did better than the vast majority of hedge managers and traders out there.

Scott mentioned yesterday that H&S patterns fail quite often and he’s right that they do not always resolve as expected. Now, note the subtle difference here and recall that quite often we saw an H&S fail but then result into an opposite move equally strong. So the concept of failure in my mind depends on your perspective. To me an H&S is nothing but a congestion zone or inflection point – support/resistance area – whatever. It’s where the tape usually switches into fourth gear after driving everyone crazy for a days/weeks/months (given the size of the pattern).

So in a way I’m with the old convict – what should have happened here is a huge bust to the upside. And technically it’s still possible, after all I also told you guys to expect a fake out move preceding the push higher. So far so good – except for seasonality, which is not favoring the bulls in January. After having stricken out several times at the Santa base are the bulls now going to storm the beached in January? I do have my doubts. 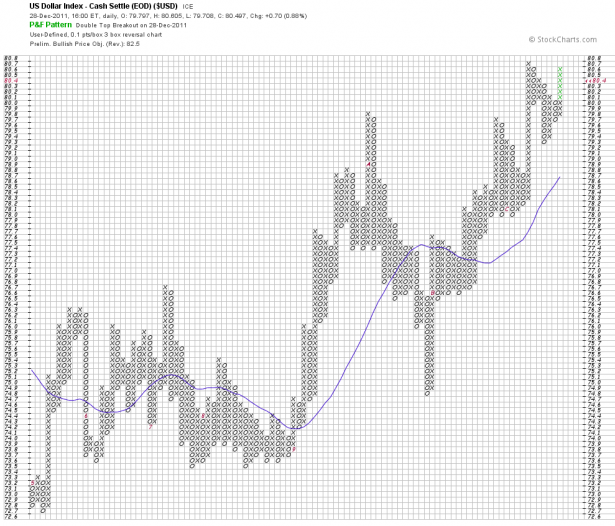 Especially with ole’ bucky on the move. You don’t need to be a point & figure aficionado to call this a very bullish chart. Note the BPO of roughly 82.5.

I don’t have too much else to share – very little activity out there that I want to touch with a ten foot pole before New Year’s Eve. But I managed to scape together a few juicy charts for my subs: 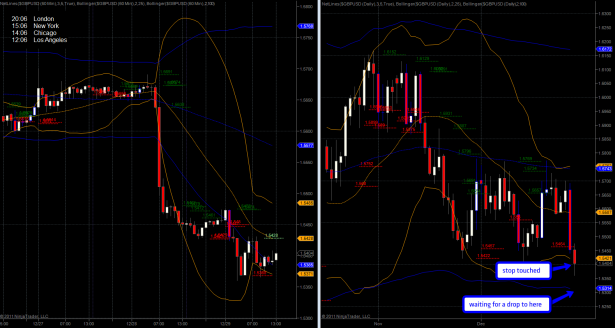 Cable continued downward and hit my stop – how scandalous! I am now waiting for instructions – meaning for a touch of the lower 100-day BB line as suggested by the breach of the daily NLSL. 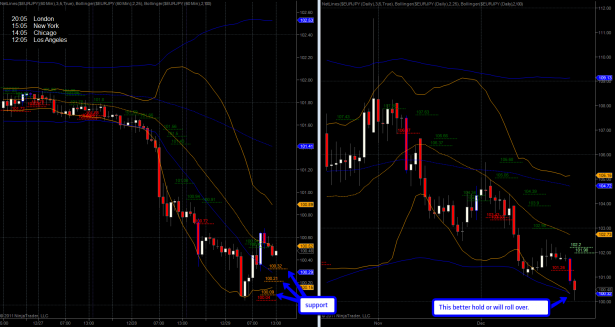 EUR/JPY better hold here as those support lines are starting to droop down. Watch that hourly support cluster I have highlighted – if that gives Kansas is going bye bye, Dorothy! 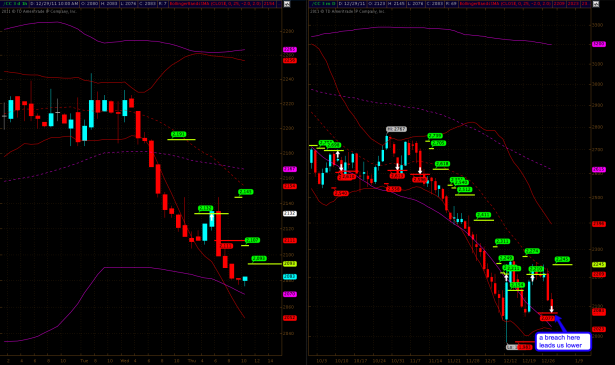 Cocoa is now at its NLSL and that’s where I want it. Going to put a stop a few ticks away and forget about it. If this one gets stopped out then I think the entire long setup blows up and we most likely continue lower. Which means that you can of course play the other side as well. 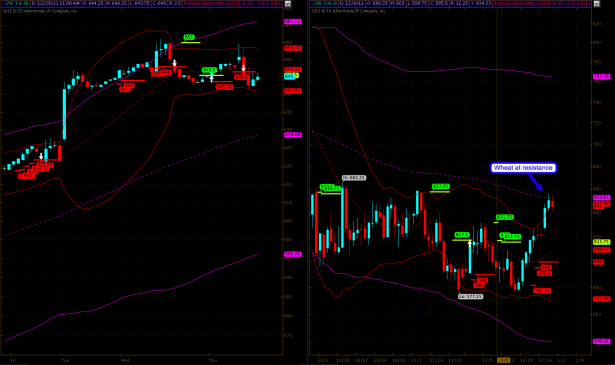 Wheat turned right I thought it would – BUT I’m not sure that it’s done climbing yet. This is one of those setups where you want to pyramid your positions while you’re proven right. If you get stopped out then we have a long setup and there’s nothing but air above. Which almost makes me wish for a stop out 😉 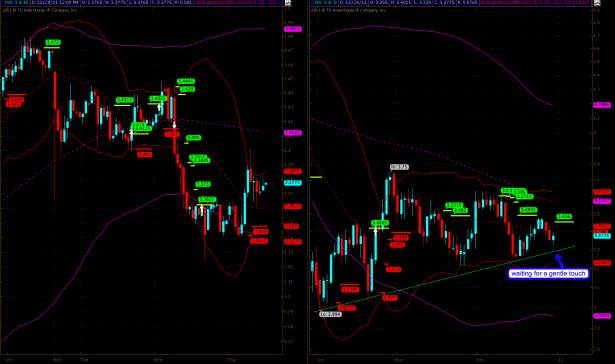 Did anyone notice that copper is bouncing along a diagonal support line while equities are pushing against a diagonal resistance line? What is a megalomaniac market analyst supposed out of that? Either way I am waiting for it to touch that support line again – which of course may resolve to the downside as well. Either way we’ll play this beast in the near year 😉
[/amprotect] Cheers,