Last month I showed you guys my spiral calendar chart which suggested that we may see a meaningful retracement in early January: 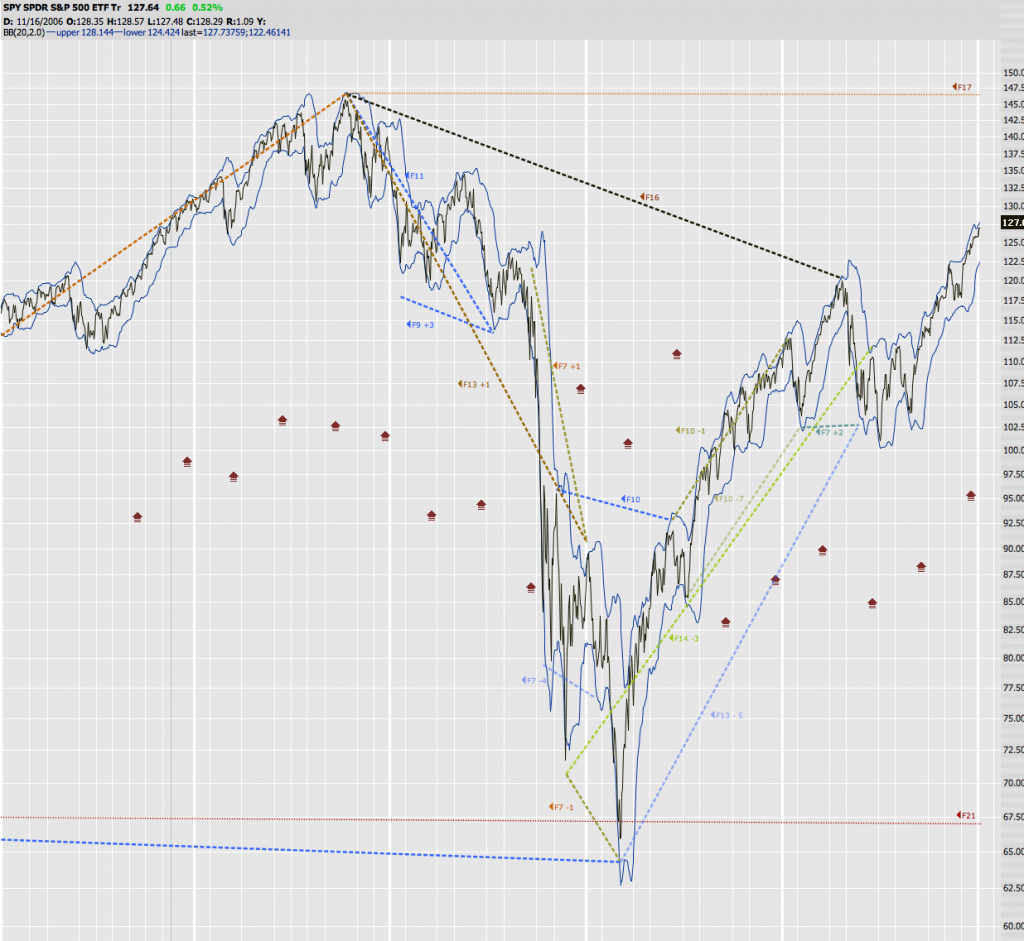 As you can see there’s an F17 and a F21 coming to a point either this or next week. This occurs at the very same time a large number of bears are expecting a pull back – which is exactly what’s making me so nervous. Usually, what everyone knows is not worth knowing, so I’m looking for clues that may either support or discredit this time cycle date.

[amprotect=nonmember] Charts and commentary below for anyone donning a secret decoder ring. The rest of you guys will have to wait until tomorrow – sorry. If you are interested in becoming a Gold member then don’t waste time and sign up here. And if you are a Zero subscriber it includes access to all Gold posts, so you actually get double the bang for your buck.
[/amprotect] [amprotect=1,9,5,2] 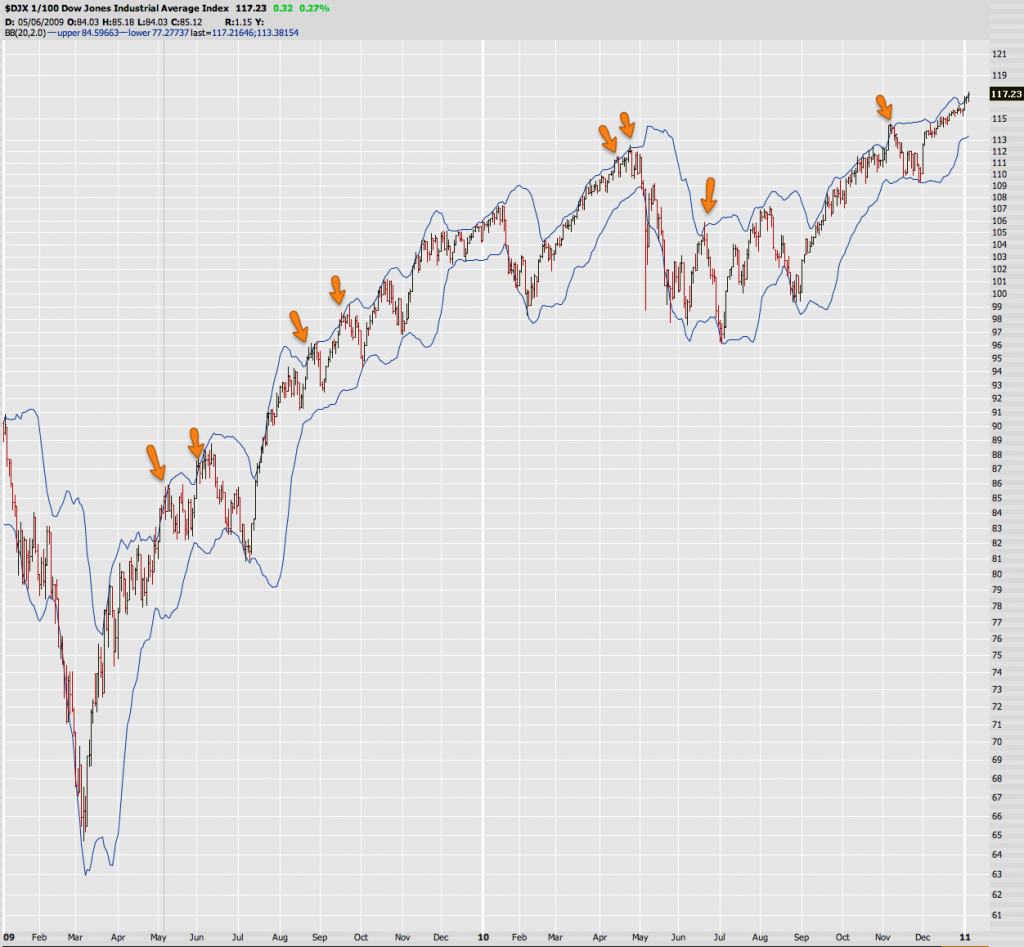 This is a very simple DJX chart with a standard 2.0 BB on it. Despite being a common TA indicator it’s however very accurate in predicting medium term pull backs. And based on what I’m seeing a retracement within the 2.0 BB may be in the cards. 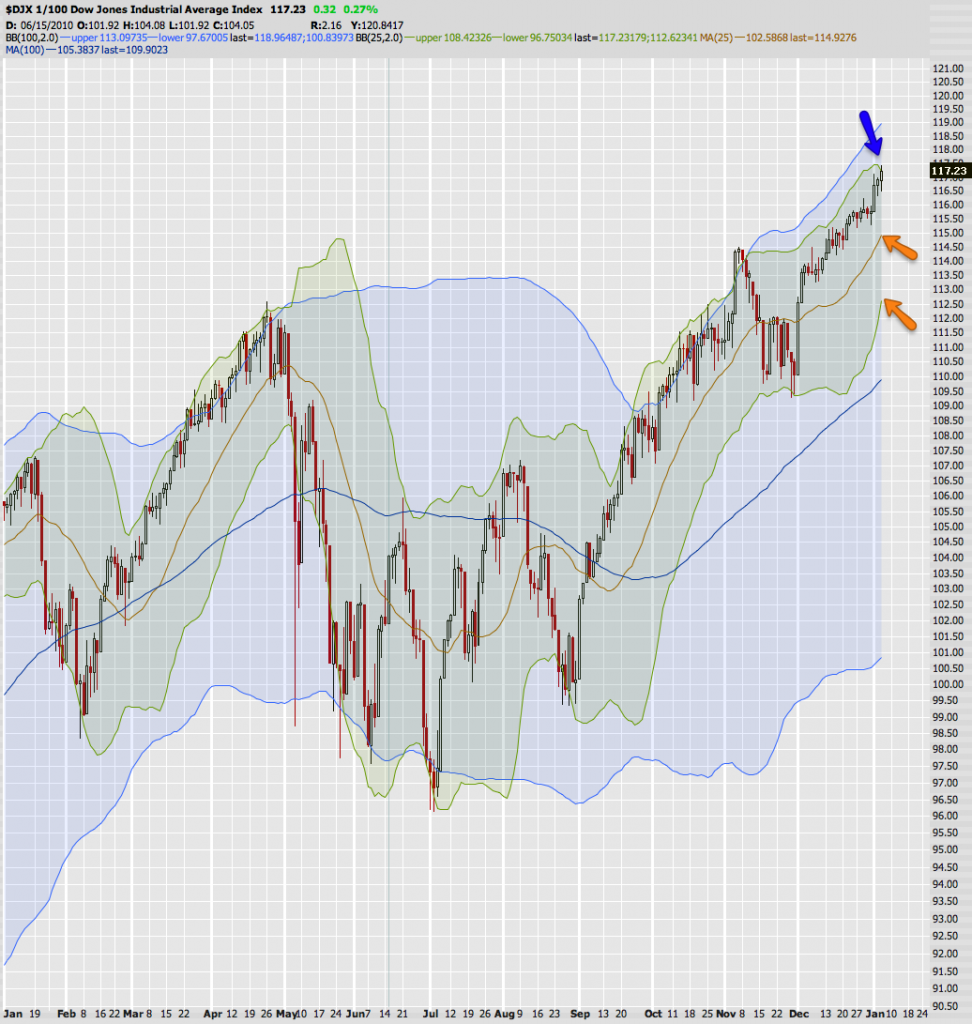 Another BB chart – slightly different and overlapping settings. I’ve shown you this chart in the past and I use it as a long/medium term mix to evaluate probabilities of a pull back. If we’re outside the green a continuation is sometimes possible (see March and October of 2010). Outside both BBs and a reversal is all but guaranteed.

Now what I’m seeing is a healthy setup for a inside-BB reversal – but nothing that screams long term reversal to me. So, this chart stands in conflict with the spiral calendar chart – there seems to be plenty of space for a continued melt-up, assuming we get a health shake out and then push higher. 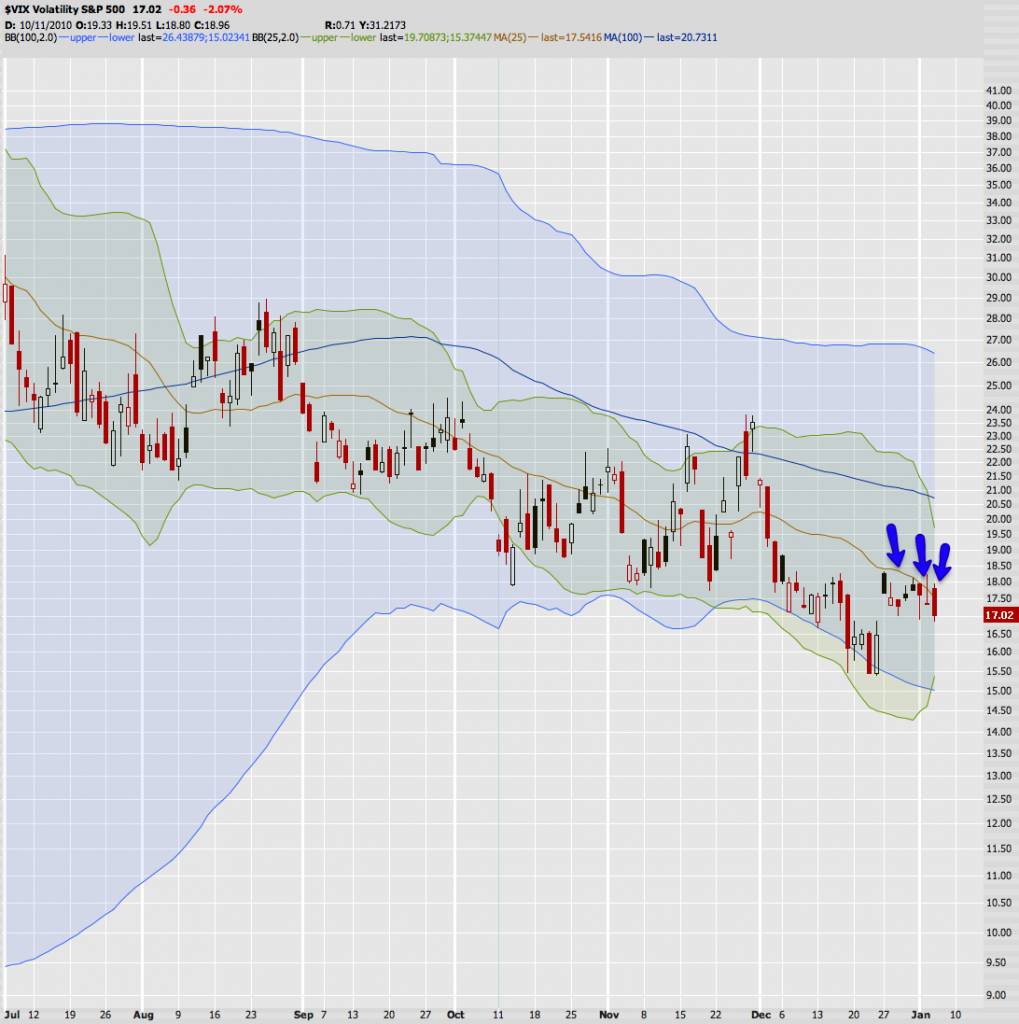 Similar BB chart on Mr. VIX. I’m seeing it walk down the center 25d MA line (on which the BB is based), but thus far it has not been able to breach. And even if it does breach it would push outside its BB around 20. Assuming things get out of hand (HFT style) it would be outside the 100d band at 26. Not exactly a setup for a deep retracement if you ask me. 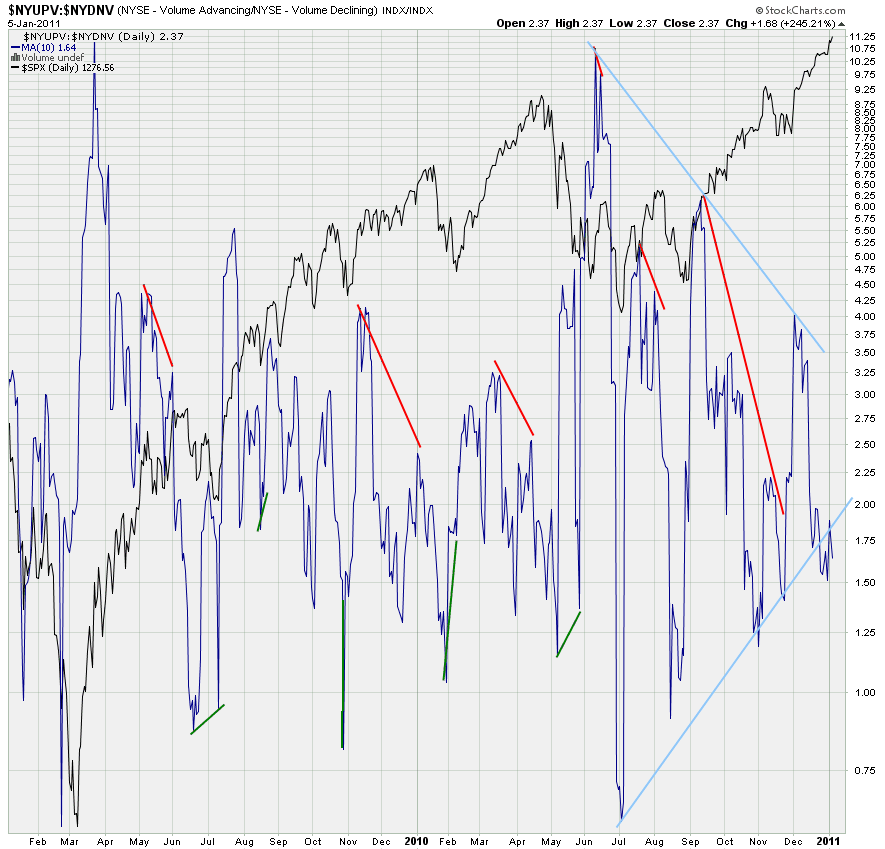 My momo charts are all over the place right now. The clearest chart is the NYSE volume ratio – which actually is in bounce territory – go figure. So, nothing really makes sense on that end. Moving on. 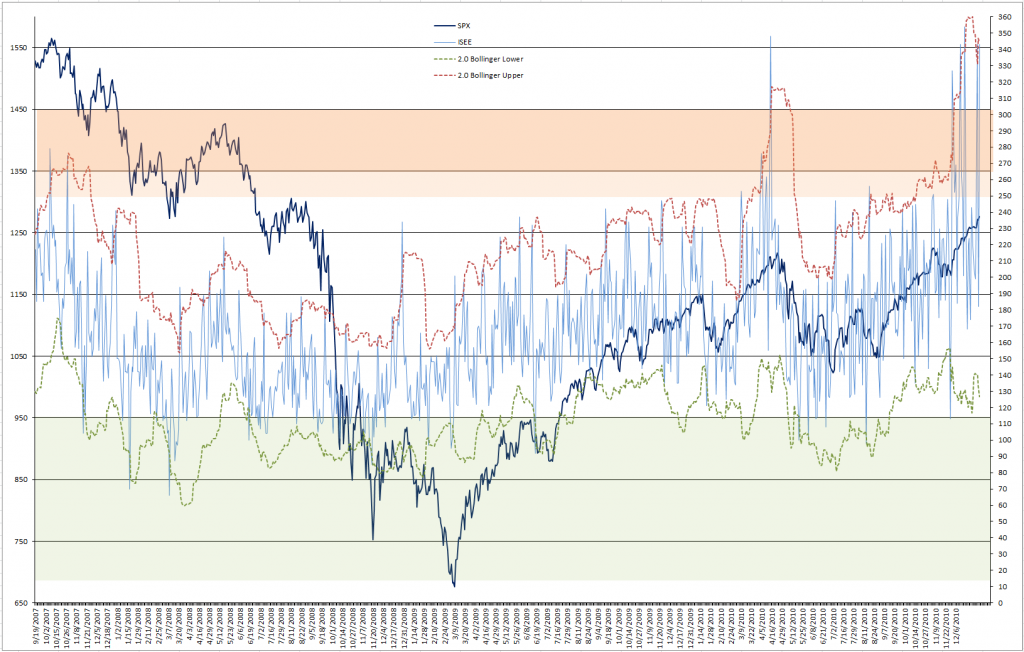 On the sentiment side we know that the ISEE keeps painting extreme readings. But thus far that has not yet lead to a meaningful retracement like last year. This tape simply seems to be impervious to any pull backs. 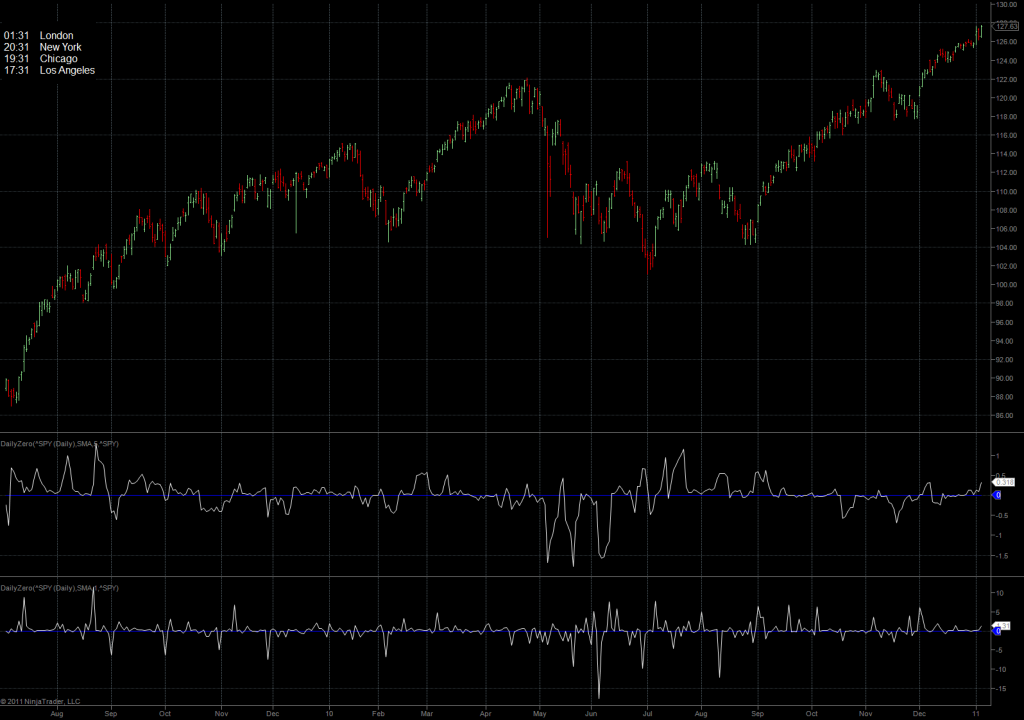 Last but not least – the daily Zero. Which suggests that we actually had a sideways correction late last year and then just kept marching on. No divergence right now – even the smoothed panel is pointing up. Not a good sign for the bears.

The setup for a retracement is there – in terms of guarantees that of course means nothing these days – in terms of odds it’s a reasonable setup for a short to medium term pull back. The timing is right, the conditions are right, and many charts are pointing down. However, I am also not seeing much downside potential just yet. Before we’ll see a big retracement it would be nice to see a small or medium one. Because that is usually the setup for bigger and better things to unfold. Maybe all those charts are wrong – I’m not being sarcastic here – it’s always a possibility. But the odds right now do not support a major reversal as advertised by my spiral calendar chart – I wish it wasn’t so but here we are.

So what I’m seeing on the horizon is a pull back that will be bought rather quickly. Many support levels lurking below, thus many opportunities for dip buyers to use the huge amount of outstanding POMO cash to prop things back up. And I haven’t even updated my POMO chart just yet – don’t really have to as we’d have to see a complete reversal to zero before anything really nasty in equities should be expected.

Finally, in terms of timing – January is really it. If the shorts don’t muster up a reasonable pull back here then it’ll be a loooong cold winter for the grizzlies. So, let’s see if it happens – but now or not is my general POV.