Off To The Glue Factory 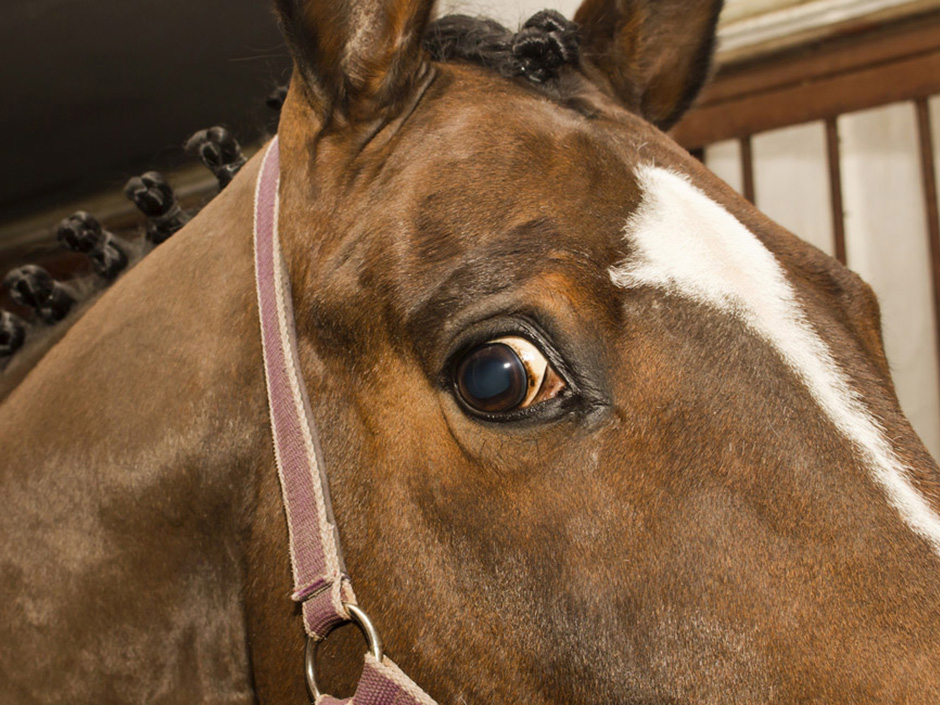 It’s done, toss it on the truck to the glue factory. We’ve finally reached the “Warren Buffet quotes” stage of market destruction today… And as usual, the Oracle of Omaha had it bang on… 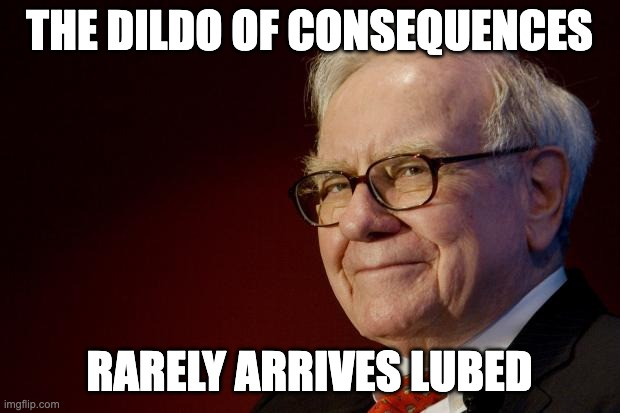 You see, raising rates in the USA has made the US Dollar more attractive than every other currency.

No nation (with Germany in close 2nd) has been screwed harder and with less lube than Great Britain (now renamed to “Good Britain) which is having it’s worst trading day since July 4, 1776 – WTF!

Apologies in advance to all Brits as today’s email is gonna be mostly me dunking on the GBP. So if that upsets you… blame Charles who became king and then rugged it. J/K – Charles is the least of the Island’s troubles. ‘Truss” me on that…

The new imbeciles who replaced the old imbeciles in England decided that the way out of their economic problems is to enact a bunch of tax cuts for the rich so the unwashed rabble would get a “trickle down” benefit.

And the market gave them a resounding thumbs down to that idiotic move.

GBPUSD is now trading at it’s lowest price EVER. 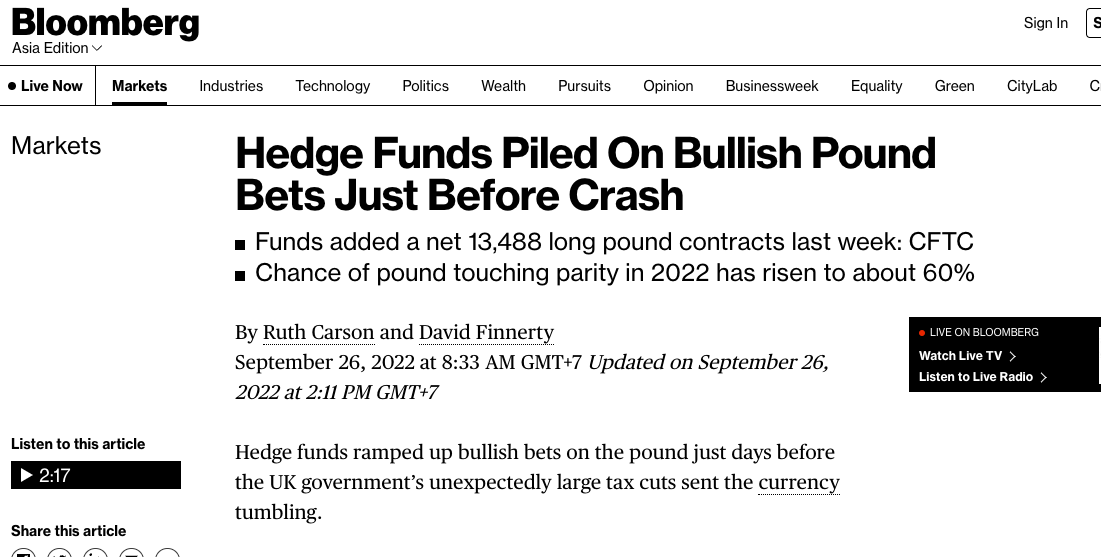 Good luck with the YE bonuses this year, finance bros! 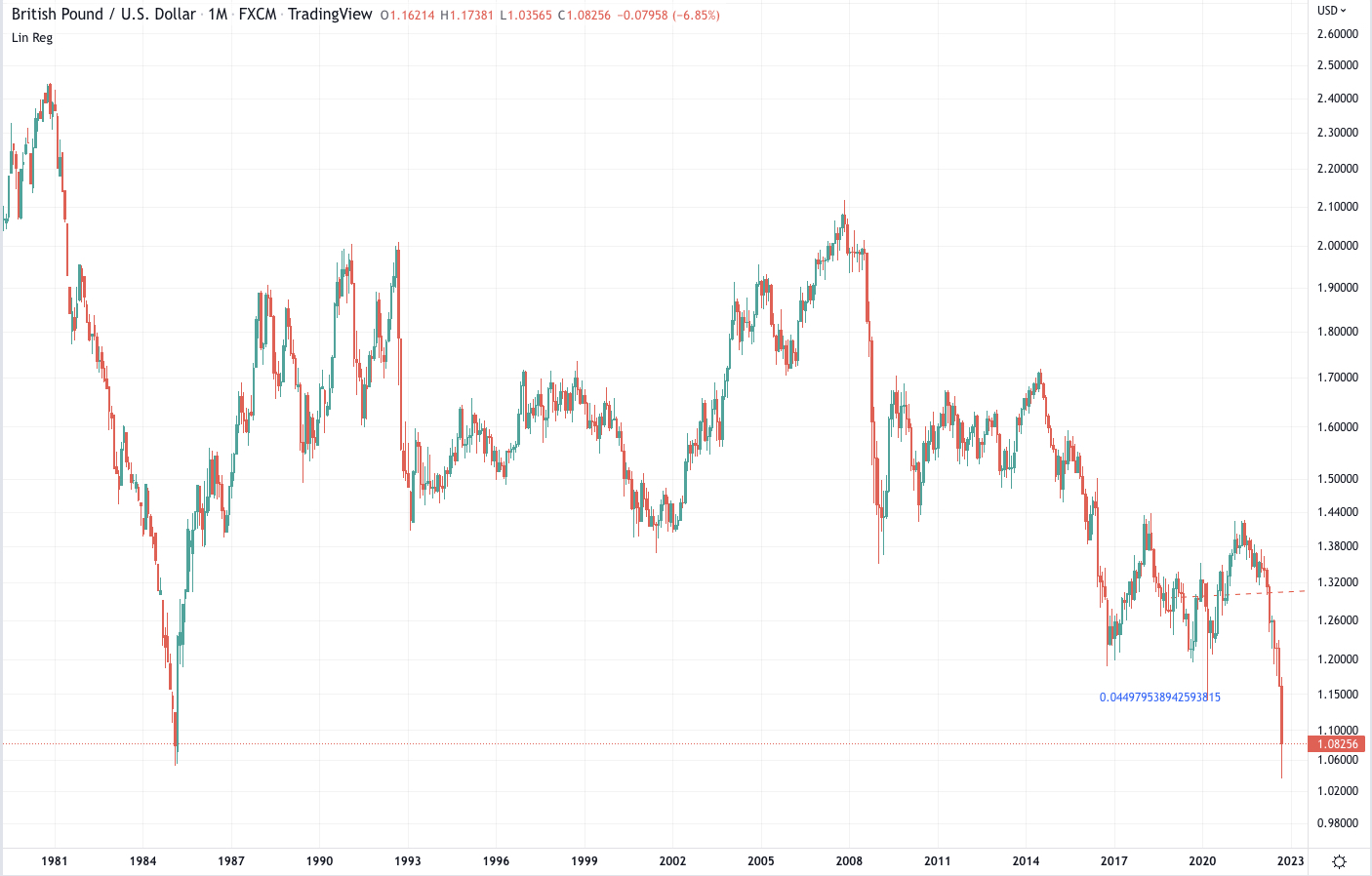 Today it traded lower than when George Soros broke the bank of England way back in the day. 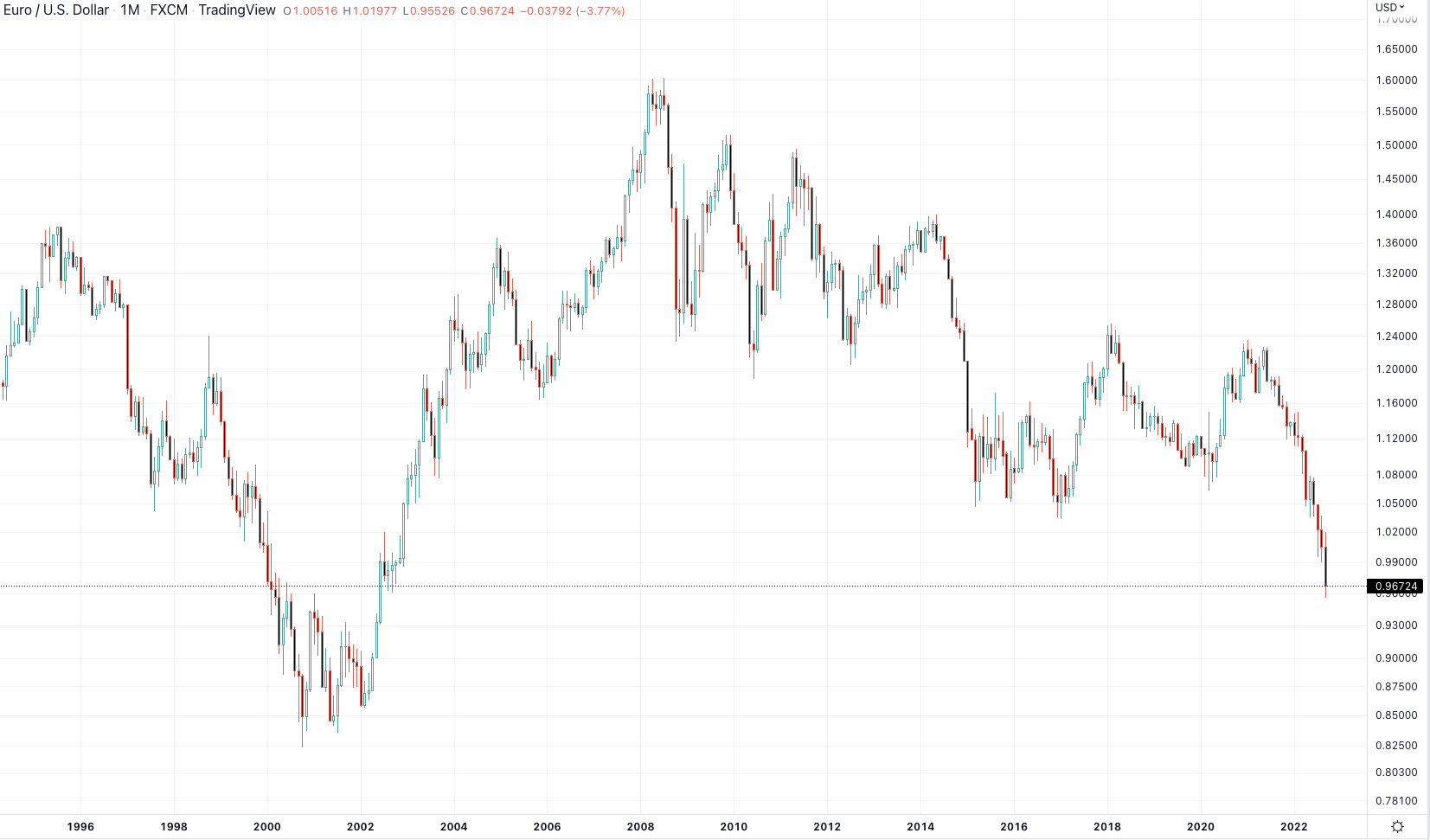 ALL the other currencies seem to be going bonkers as well. The EUR, AUD, NZD, the emerging markets… Everything must go today! 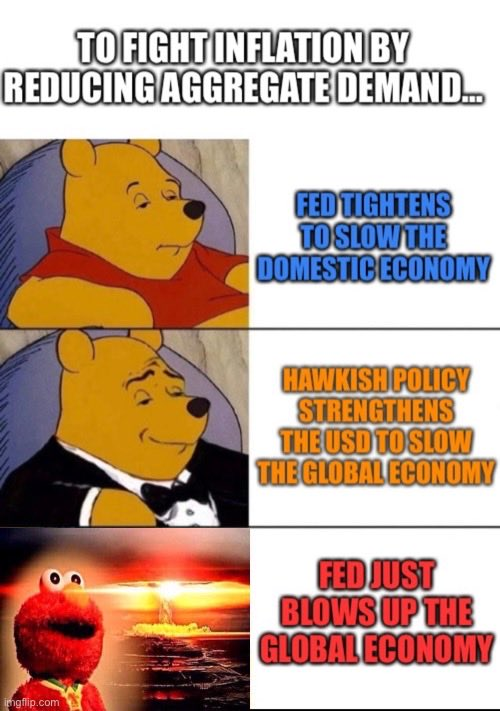 Presumably someone is waking J-Pow up right about now and explaining to him that crashing the economies of every one of their supposed allies to lower inflation isn’t gonna win him many friends.

Of course in this business nobody’s in it to make friends, and moving forward it’s every man for himself. Sorry Euro-tards!

So, the Fed wants to keep raising rates.

They’ve said loud and clear that they don’t care, that it will crash property and stock markets… and you should have believed them.

Of course that will break the markets and as liquidity dries up in the plumbing of the global economy the US Dollar goes through the roof.

But if you are English, don’t despair.

Your net worth could buy 4 cartoon ape jpegs last year and now you are worth 12 cartoon apes. YOLO! 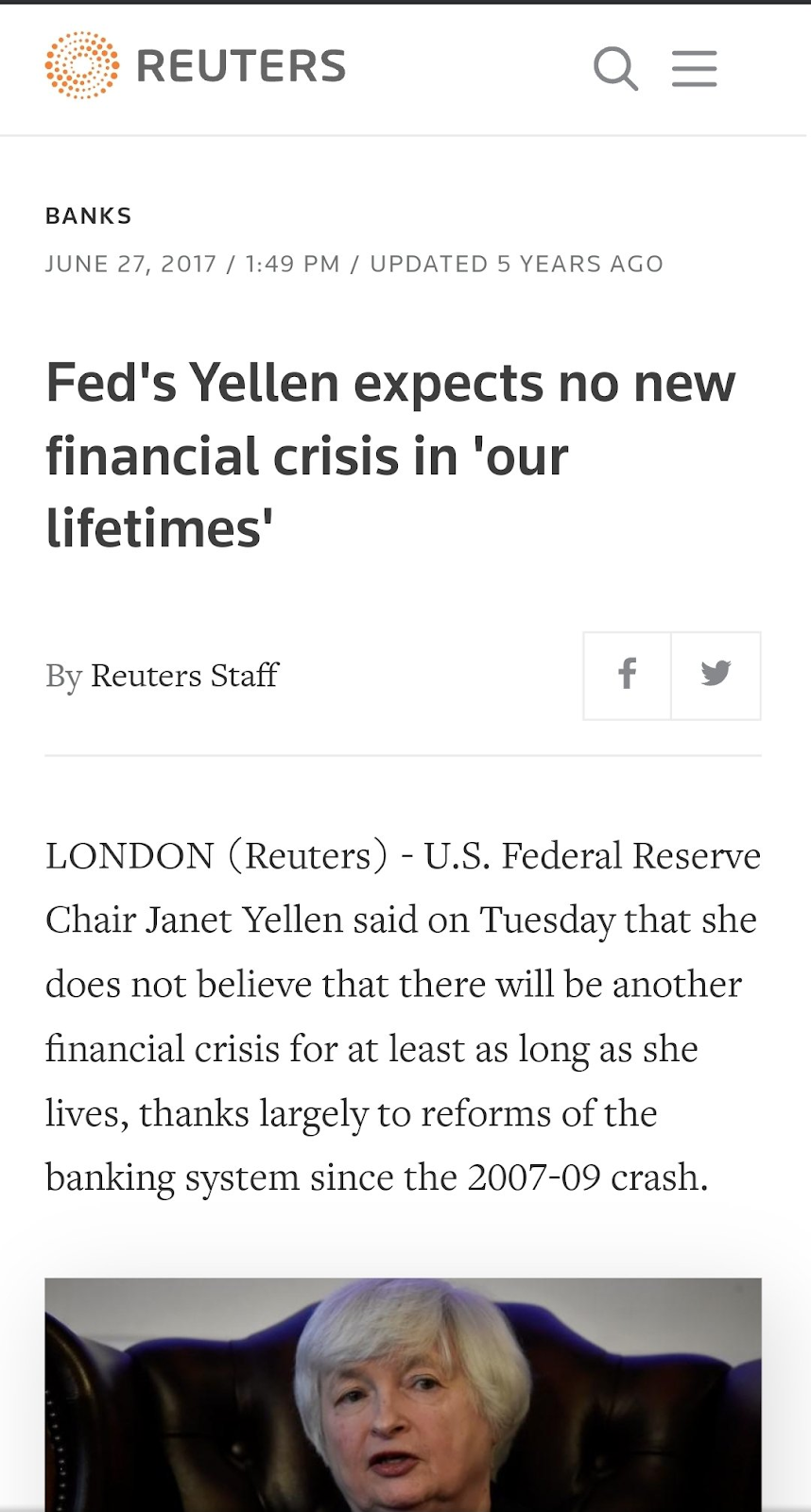 And while we are dunking… let’s not forget about the old Yeller!

Make no mistake, this is the start of a 2008 style redux. 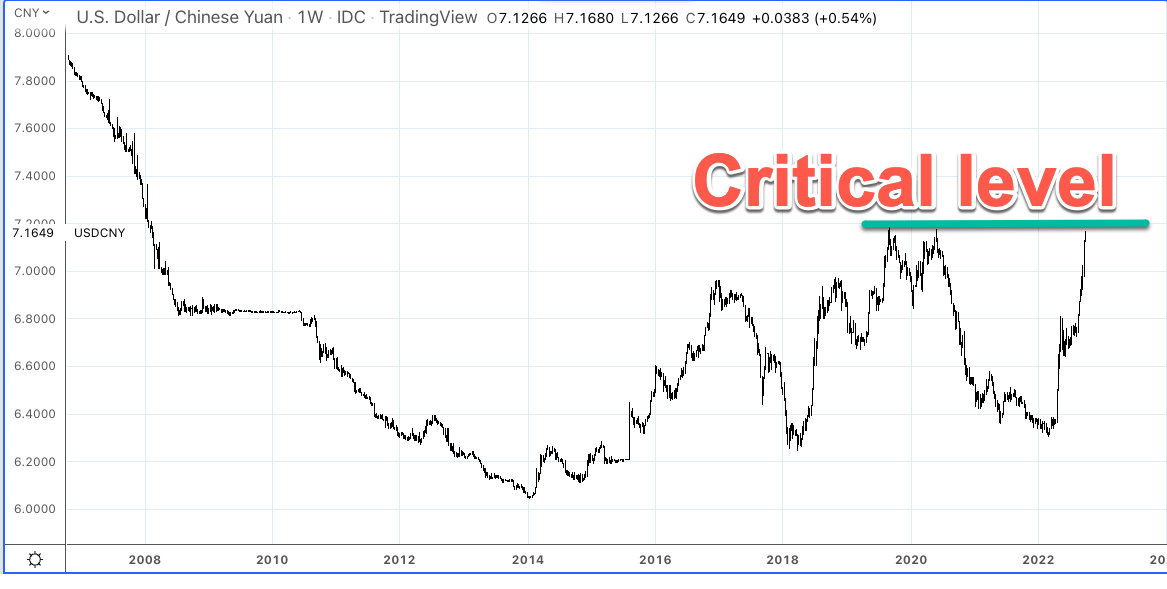 The one that really matters is the Chinese Yuan.

If we break the green line, expect fireworks.

How to play this is to NOT play this…

This action is so weird and so dangerous that the odds of coordinated intervention (money printer back on) just went up.

And when you bet on what a bunch of good ole’ boys are gonna do to keep things the way it is you go broke.

I know that crypto is holding up comparatively well, but that’s because it’s all in USD, innit?

So hands OFF the trading platform today, got it?

Except for the Crypto Salary System, which keeps printing money just like it’s supposed to.

I know I bang on and on about it, but it’s literally the only thing I can recommend with a straight face right now.

Everything else is just too dangerous.

So grab your popcorn, kick your feet up, and settle in with the Crypto Salary System, learn the ropes in tomorrow’s webinar and you’ll have a brand new skill to tide you through the dark days looming ahead.

Register for the tomorrow’s training HERE

I’ll be busy moving this week (Mole’s travel curse) but will be keeping you updated play-by-play.