One For The Road

As most of you already know, I am leaving for Houston tomorrow afternoon. I plan to be around all through the Thursday session but won’t be able to put up a post later that night as I will be traveling. I expect to put up a comment cleaner with some quick thoughts sometime Friday – probably later in the afternoon. My return flight is scheduled for Monday night, so you can expect my next complete post on Tuesday afternoon. There will not be a Sunday update – sorry folks – I will be traveling light with a small lappy this time as to avoid a repeat of the India debacle last year: 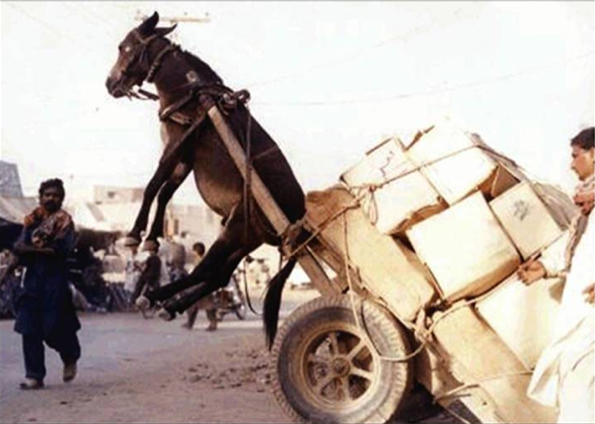 Before you curse my name – I will do my best to compensate for my absence by inundating you guys with long term charts and exhaustive analysis next week. You think you can manage without me for a few days? 😉

Support Questions: I will be checking my email several times a day during my absence and assume that all subs know how to reach me. Please allow 24 hours for a response however as I expect to be pretty busy during my absence. 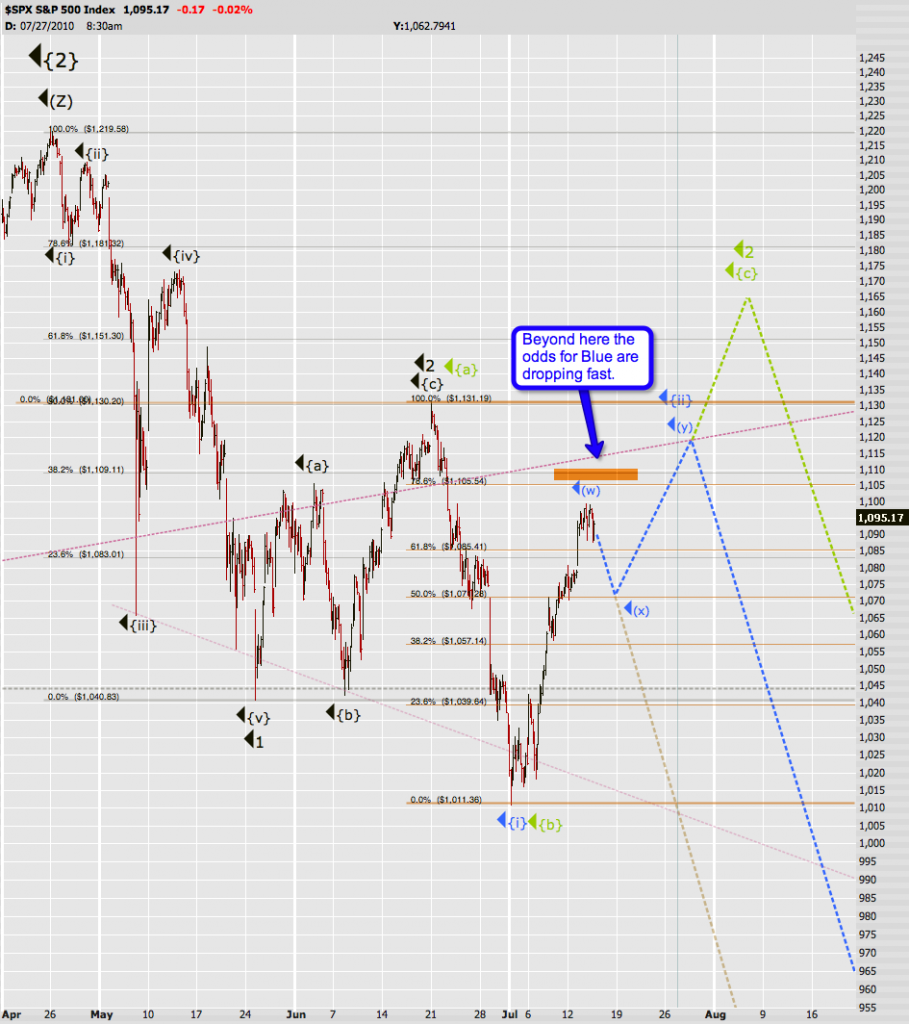 I wish I had some good news for the bears to report tonight but I just can’t find any. Fact is: We have been melting higher in extremely overbought conditions for four days now. I had expected at least a wiggle to the downside Monday or Tuesday at the latest and thus far it seems that the bears have taken the summer off. The AUD/JPY is in monster short squeeze mode and doesn’t show any sign of weakness. It’s possible that a drop in the Euro may bring about a much needed correction but I wouldn’t bet on it.

See, the situation is now exactly the inverse of what happened in June when we saw 9 down closes in 10 trading days. The light volume of the summer session is not helping and I find myself pushing the Soylent Blue scenario higher each day – so much so that it is starting to resemble Soylent Green. Which is pretty much the worst case scenario I was able to think of way back when we were painting new lows. 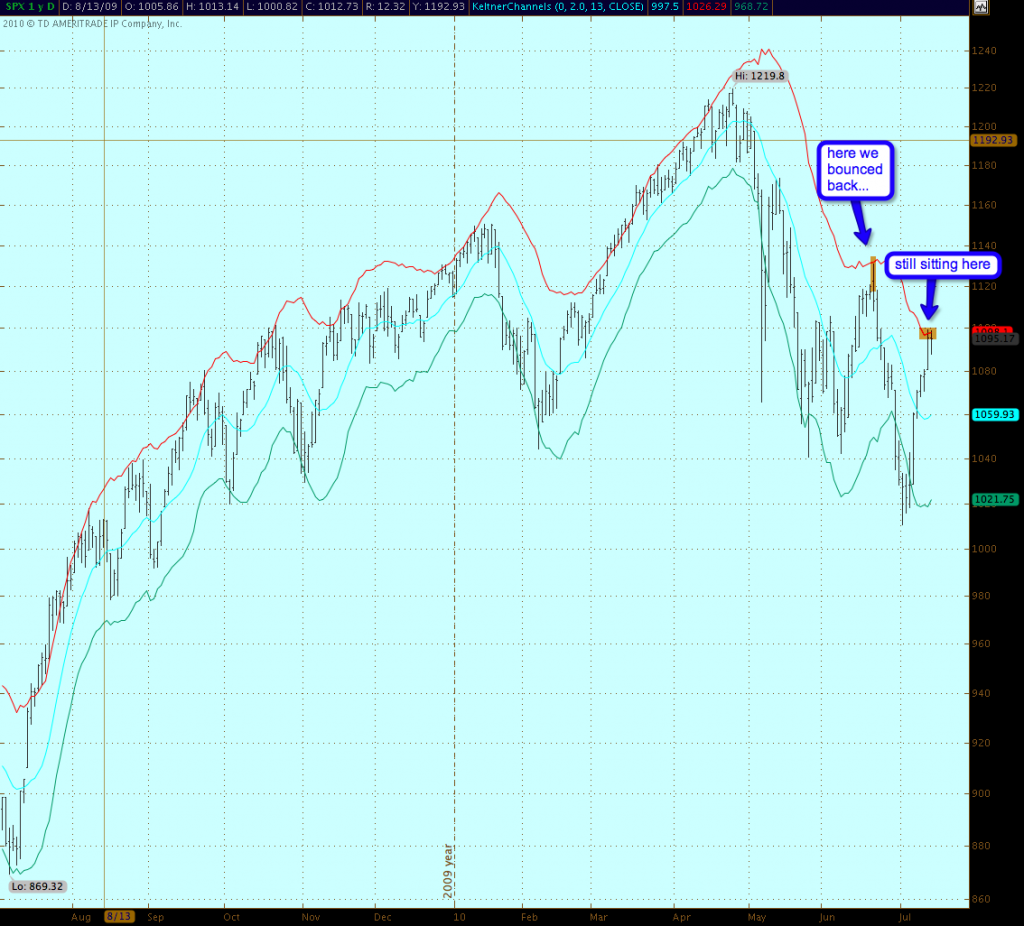 Thus far 1100 has proven to be resistance as the bulls have not been able to push above it. However, look how we bounced back last time, no questions asked. This is the type of move we would want to see for two reasons:

So, here is a big incentive for any remaining bears out there: If you lose the 1100 mark tomorrow you will be sorry all the way into August as the ensuing stop run would be of biblical proportions. We are easily talking 1150 here and we may see 1175. 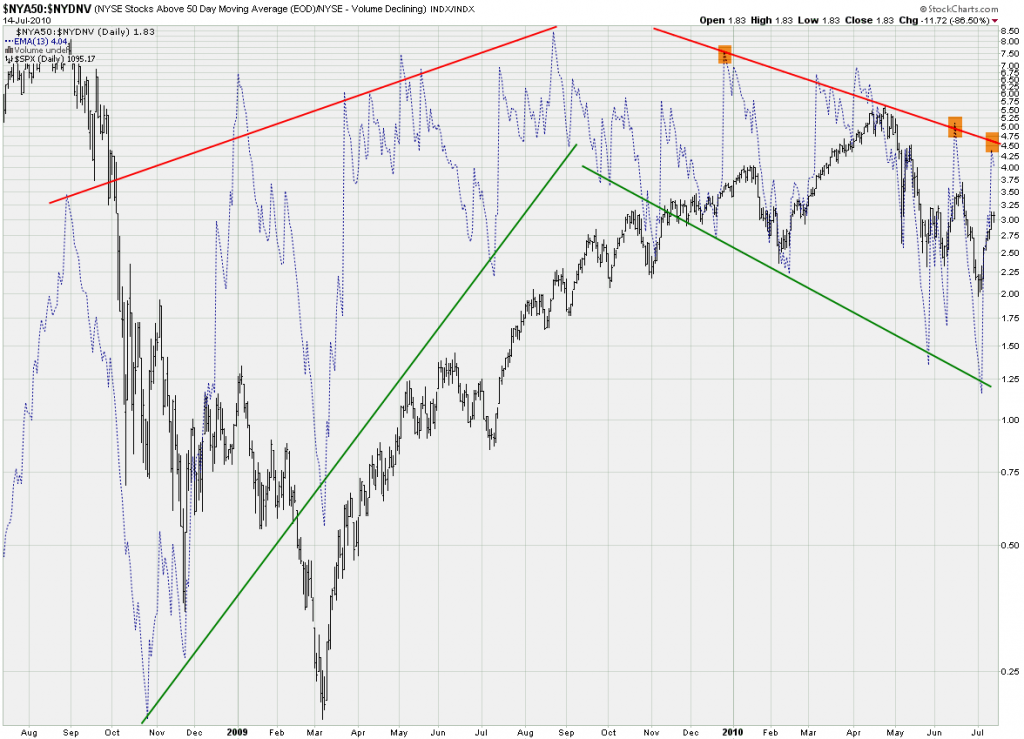 As you can see we have distinct trend lines here which seem to be supportive of oversold/overbought conditions. What I am continuously  trying to do with those ratio charts is to simply remove the lies from the tape. Markets go through rythms and sometimes overbought conditions on simple indicators or measures prevail beyond the expectations of traders and investors. This is the meat behind the expression that the ‘markets can remain irrational longer than you can stay solvent’. Not that the chart above is fool proof – there are periods when the tape keeps marching up and as such a touch of the trend line does not necessarily mean the tape will turn. Divergences (as coveted on many levels by yours truly) seem to be where the real action is. And if nothing else – snap backs do offer confirmation that a new trend is in the works.

As you can see we are close to touching the upper trend line and even painted a little line to the downside. But that in itself does not mean much – however it may mean that at least a short term correction may be near. 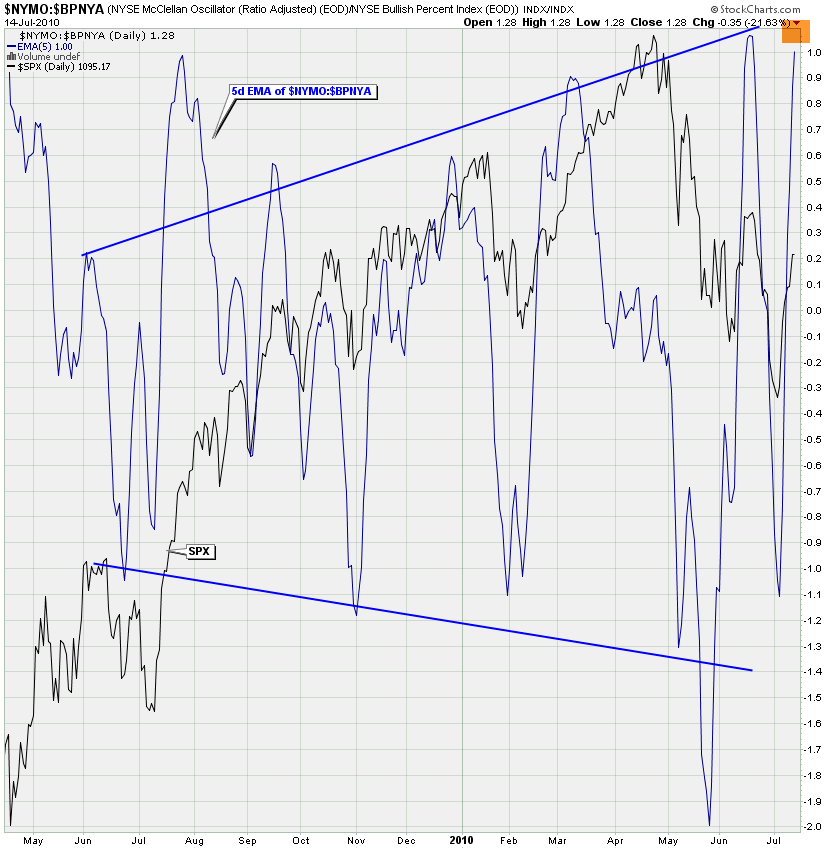 My McClellan/Bullish Percent ratio chart is telling a similar story. But again – look at prior precedence. We sometime touch the trendline and then continue upward for a few more days. It tells us the rally is running out of steam but it does not tell us that it’ll happen tomorrow. 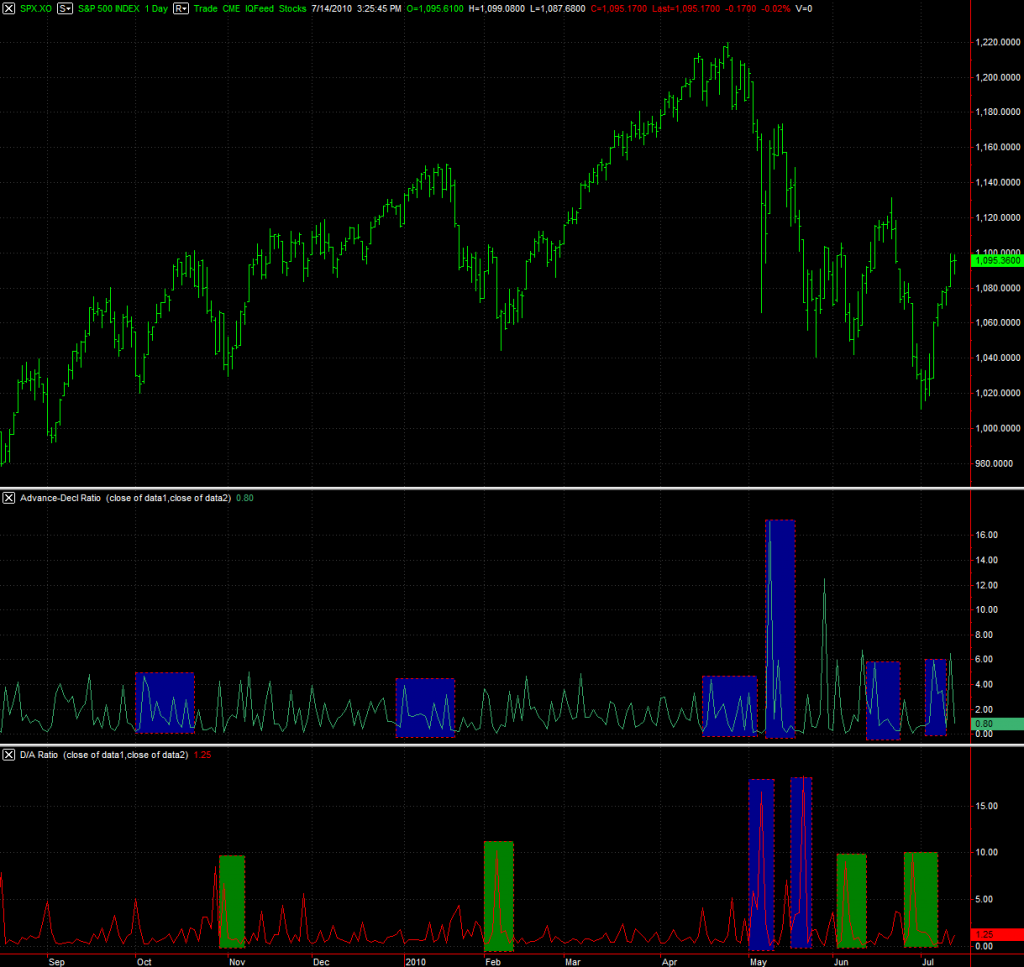 Okay, one more for the road. On Monday evening I got a bit excited about the possibility of a Gothic Church Tower pattern on the NYSE A/D ratio chart. However, yesterday we actually got a higher spike up and I am not sure if that invalidates the pattern or is representative of a low volume summer tape banging session. Again, based on what I’m seeing in the futures right as I’m typing this I wouldn’t get my hopes up. We may see a small drop followed by simply more tape banging and short stopping. The bulls have smelled blood and are determined to punish the bears for all of June and then some.

As Jesse Livermore always said: The tape always follows the path of least resistance. Despite being a pain in the ass contrarian, to me right now it still feels as if the most resistance is to the downside. Sometimes that’s all we have to hang our hat on. Thus I have to remain solidly in the Soylent Blue and possibly even in the Soylent Green camp until early August. The Clockwork Orange scenario made it on my wave count but it has the smallest probability right now. Maybe that will change tomorrow but until then we have to trade the tape we see.

While I’m gone – keep it frosty – and don’t do anything stupid. Calling a top in these conditions is almost guaranteed to get you into trouble and I want to make sure you still around and ready to play once I’m back from the Lone Star state.