Only The Paranoid Survive

You may remember that one as the title of Andy’s Groove’s book – a great read and I recommend it. Over time it has also become one of my prime directives on the trading side which quite often kept me out of big trouble. Obviously ‘paranoid’ is a strong word – but ‘only the vigilant survive’ sounds a bit meek to me. Anyway, as I still have a hard time sitting for long periods of time let’s right dive into today’s subject matter – here’s exhibit A: 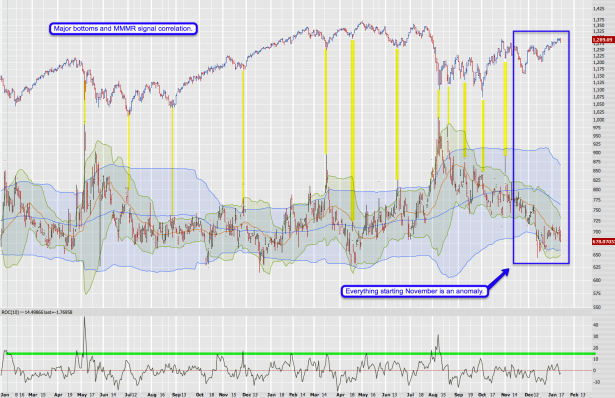 Ignoring all ill advice from my sadistic Chinese chiropractor I spent much of the afternoon sitting at my desk and fiddling with the Prophet chart version of my Market Maker Mind Reader (MMMR). I finally found out a way to plot it in conjunction with the SPX, which you see in blue candles above. This is the inverse version, which appears to be better at correlating major bottoms with signal spikes. Got it? Good.

The point I am trying to make here is that strong spikes outside the upper BB range often match up with major market lows. Very valuable – when you can get them. The 25-day and 100-day SMAs also seem to impose a certain amount of influence on medium term swings. So far so good.

The issue at hand here is the tape of the past two months. In essence – it does no fit the usual recipe. And market megalomaniacs like yours truly hate it when that happens. So, I was happy to see Volar’s attempt at using his quant skills to shed some light into the situation but IMNSHO the data merely supports what I am showing here and further below. 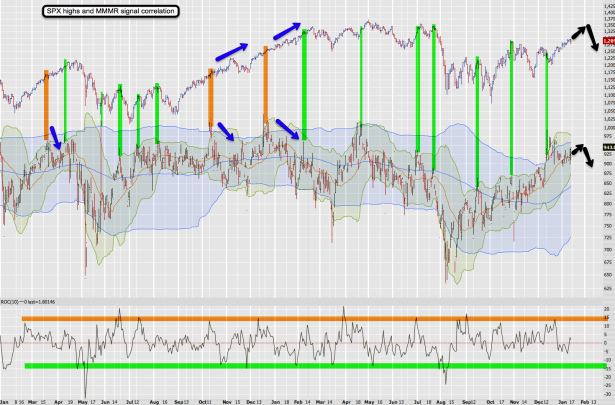 You get the idea – I basically flipped the view but it’s a bit different than just showing the inverse, which has to do with the formula I’m using. What I did here first was to connect major tops with either BB or SMA touches – pretty convincing in many cases. Except for those special times when simply nothing happens – I have drawn those correlations in orange. And the pattern is always the same – we push into what seems to be a perfect reversal point and the tape doesn’t even blink and pushes higher. Eventually we get a reversal and it happens way too late.

The current pattern is a lot more messy – we got a very strong outside signal but it wasn’t where it should have triggered. Then the tape marches up while the MMMR signal drops lower and tests the 25-day SMA. What’s going on?

We can’t be sure but it’s quite possibly one of these situations where we seasonally should correct in mid to late January but it’s not happening, thus giving credence to the bullish case. And yes, I have seen the über-bullish AAII readings last Thursday. Trust me – nobody can really figure this thing our right now.

What may happen is shown above in black – at least on the signal line but whether prices will follow suit is another question. 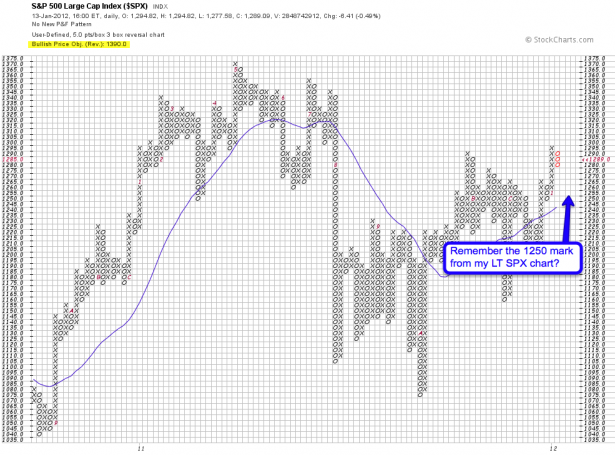 Now if we wind up dropping then I think SPX 1250 is where I would want to try a long position as the Bullish Price Objective remains intact on the SPX. Also recall that the 1250 mark seems to be strongly supported on my time based monthly SPX chart (I posted last week). 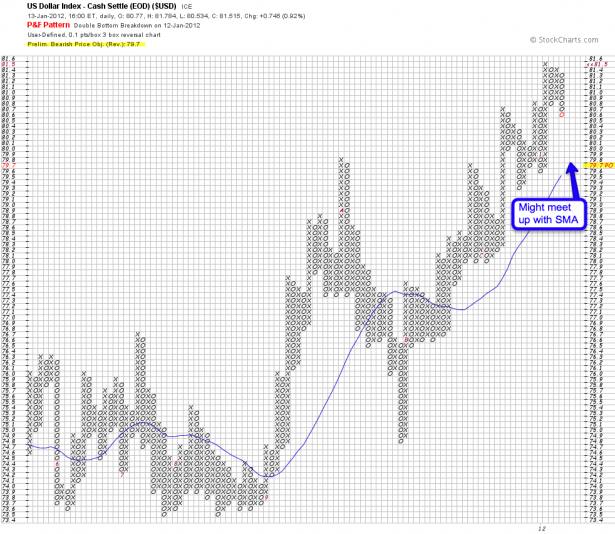 Meanwhile in the currency pit we see ole’ bucky giving up some recent gains and now plotting a bearish PO of 79.7 – again lining up with my SMA. That may favor equities – although the recent rally didn’t seem to matter much to currency oblivious equity traders. Anyway, I told you guys to take profits right at the top and I hope you listened.

Here’s a bit more bear p0rn for you guys – look at this but please keep in mind that equities have shrugged off various correlations and momentum signals as of late: 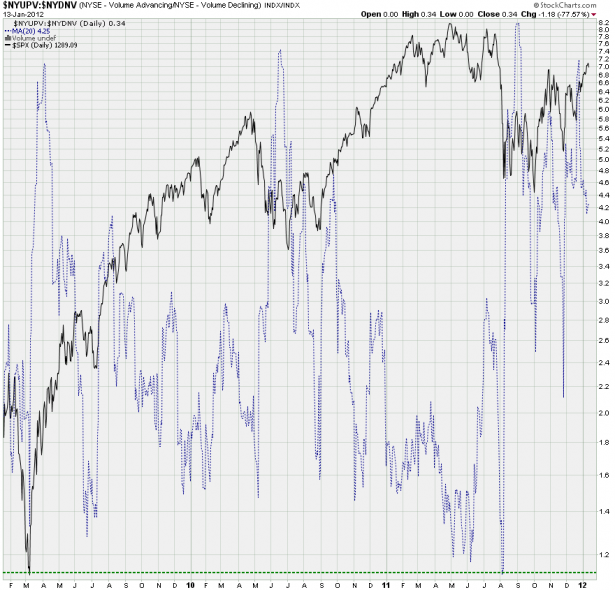 NYSE A/D volume – clear divergence here. 2012 thus far has been below average on the volume side and down volume is increasing while prices have risen. 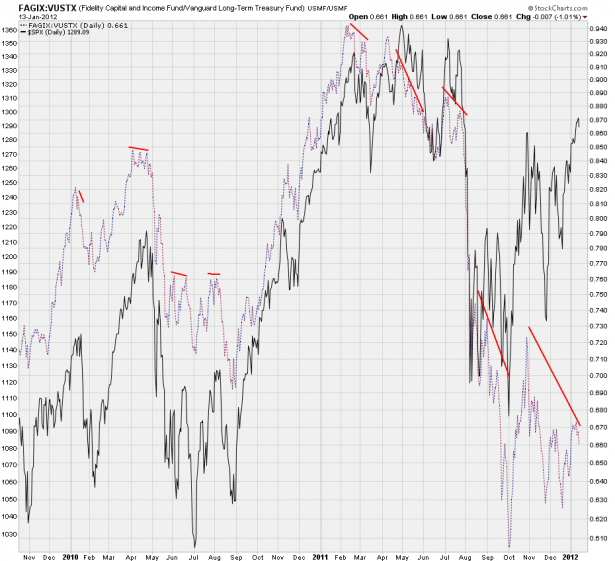 This is basically almost the same as JNK/TLT – and it’s also divergent and quite strongly so if I may add. I have rarely seen such a distinct divergence not catch up with equities – maybe this is the one big exception.

Bottom Line: Let’s not have an ego about needing to know what’s going on at every stop of the way – in particular at this very junction. Politics, currency manipulations, and various bailouts have pulled traders all over the place and I think we are seeing a bit of hopium here mixed with a healthy dash of emotions and confusion. I will say this over and over again: A good trader needs to know how to pick easy markets. And my dear steel rats – there is nothing easy about this tape right now. Nobody really knows where things are heading in the short term and since we are not near important support/resistance or inflection points it’s very tough to plan our equity trades. So let’s not – or if you do then play it small – like in tiny, itsy bitsy, mini positions. The tape will still be here in a month or two from now – and you don’t want to take on undue risks now and miss out on the easy trades. Recall that this has been our core strategy throughout 2011 and that it kept us out of a lot of traps. So be smart – be patient and shop Evil-Mart! 😉
[/amprotect] Cheers,