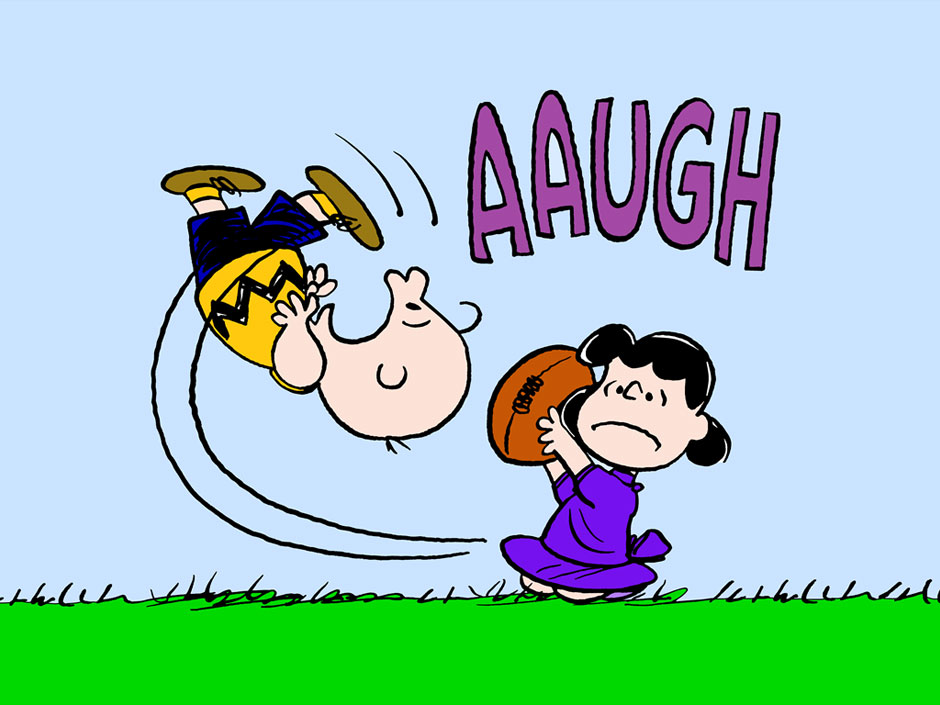 Since launching this trading blog in August of 2008 I’ve literally lost count of the numerous times when I watched the financial markets edge toward the abyss only to be stick-saved by some last minute incantation issued by our revered high priests of finance. Similarly I have long lost count of all the people who attempted to ‘fight the Fed’ and in the end paid the ultimate price of seeing their entire trading capital wiped out, either gradually or in a theta fueled pyre that even would put Burning Man to shame.

Fortunately I realized early on that moving to Spain did not necessitate fighting giant windmills Don Quixote style. Or in other words, when in doubt it pays to pick the Fed’s infinity put over the perma-bear. This maxim has served me – and hopefully some of my readers – fairly well over the past decade, but unlike Pavlov’s dogs I am starting to wonder if that ringing bell may soon end up leading us all to the slaughter. 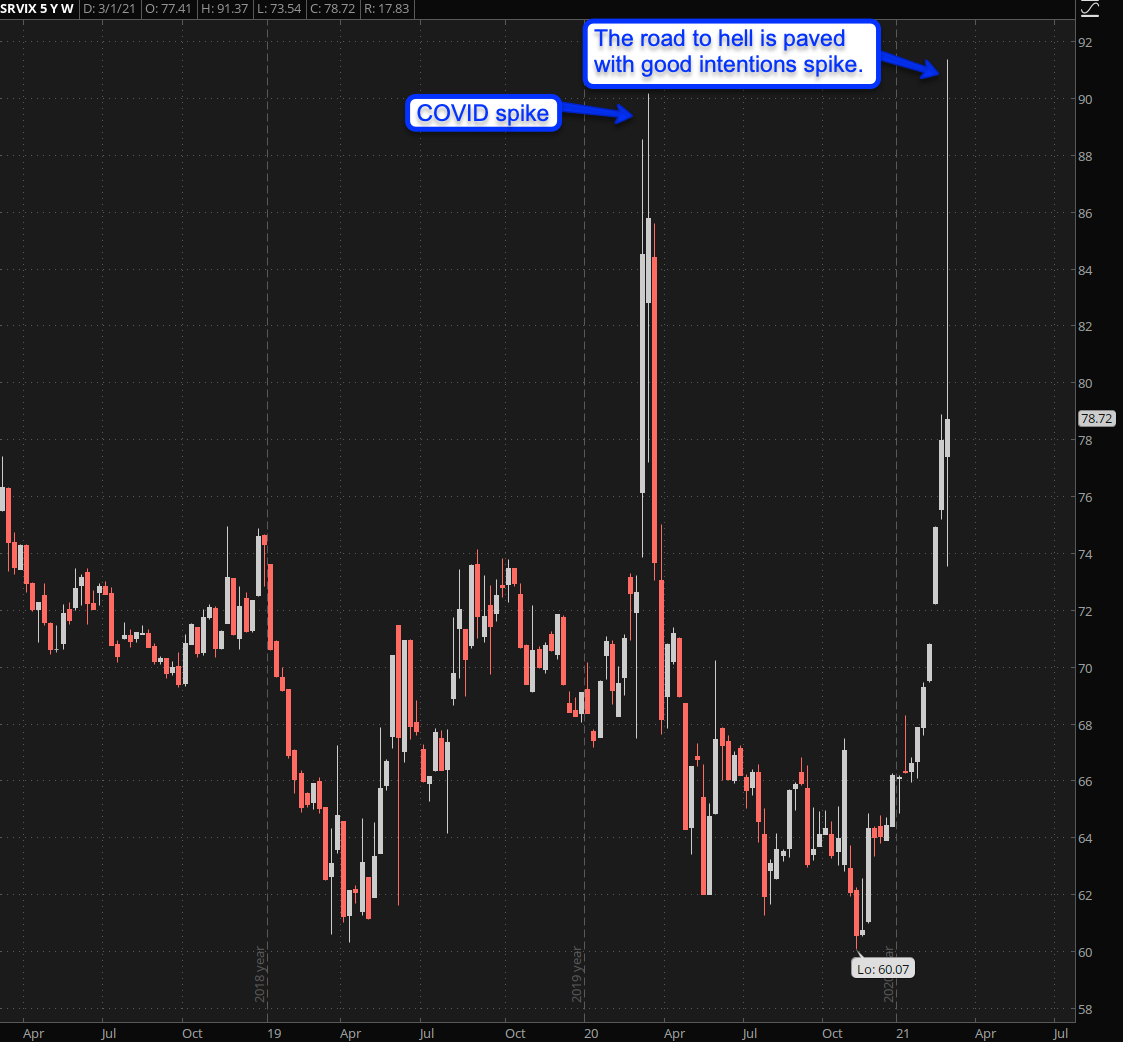 For there is an increasing number of charts that deeply worry me and therefore give ever more credence to the notion that the Federal Reserve may be pushing on a string at this point. Like most of you guys I don’t lay awake at night worrying about interest rates. But when I see extremes such as the one we painted on the SRVIX last week I can’t help but get a bit antsy.

The SRVIX is not one you see discussed very often as it relates to the black hole that is the OTC interest rate swap market. And although I don’t know exactly what this spike means and how it may affect the equities market I somehow suspect that it can’t be very good. 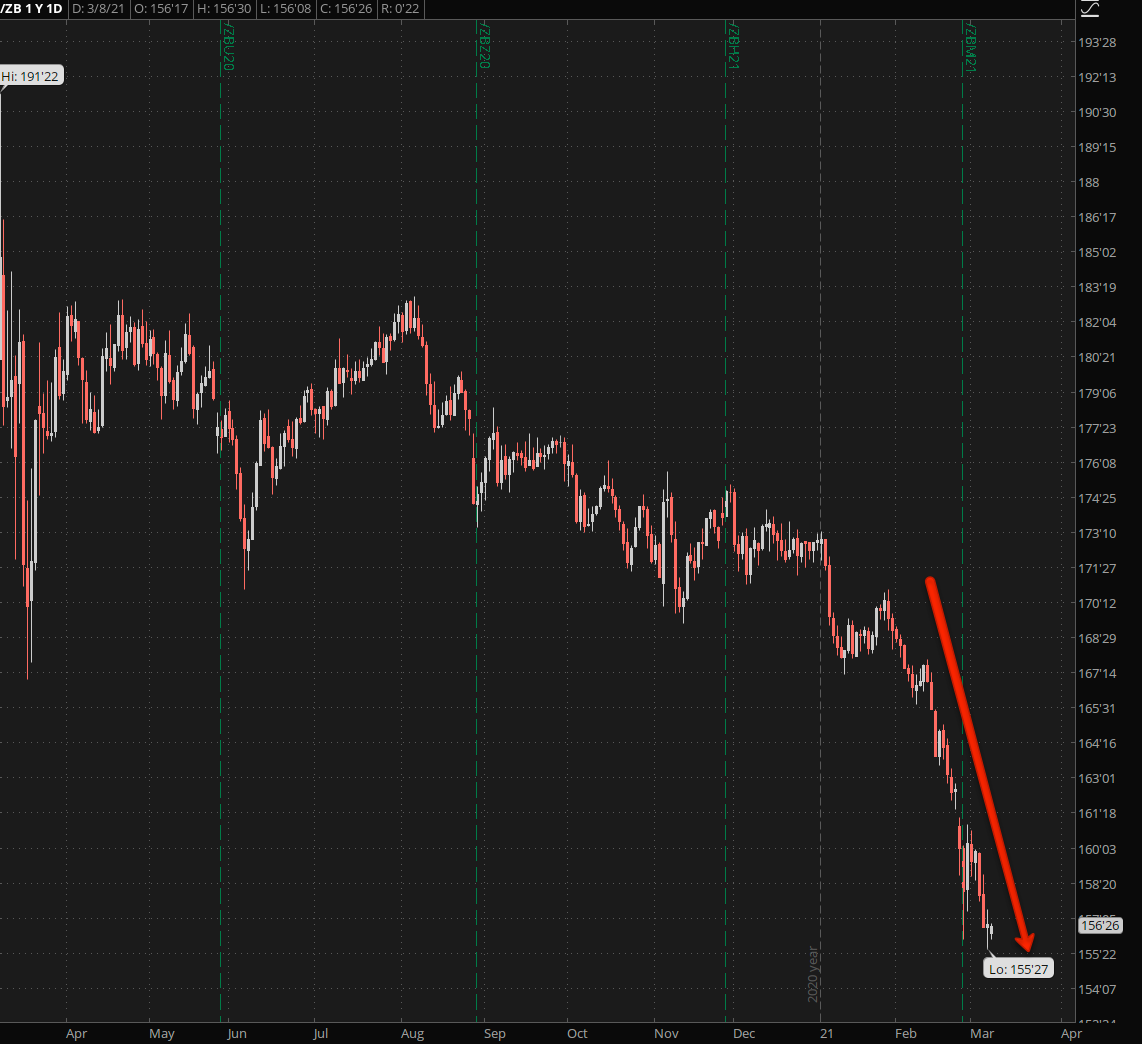 Plus there’s the fact that 30-year bonds seem to be heading straight toward Hades – trend accelerating. 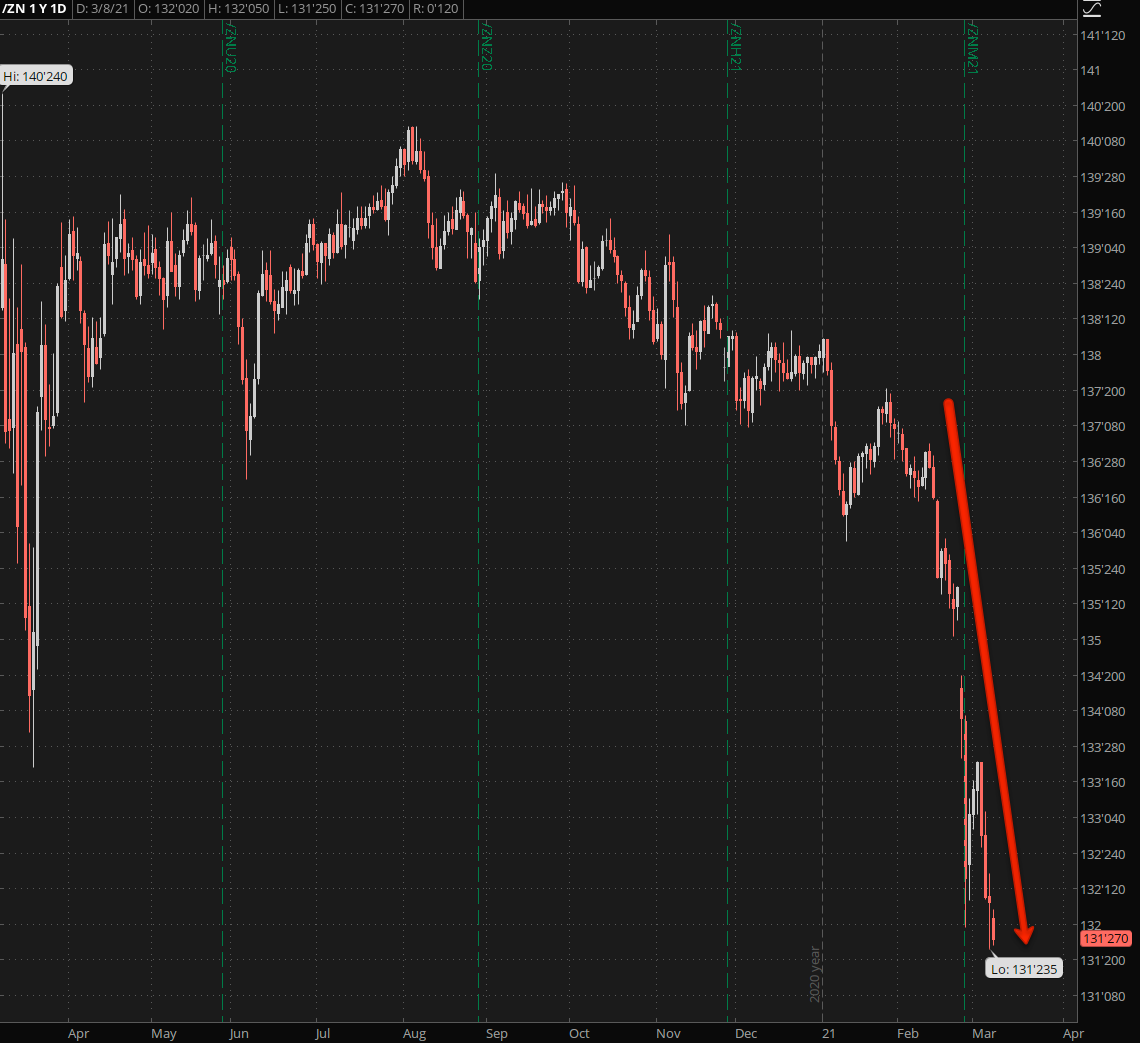 Here’s the 10-year which looks even wilder, painting one opening gap to the downside after the other. 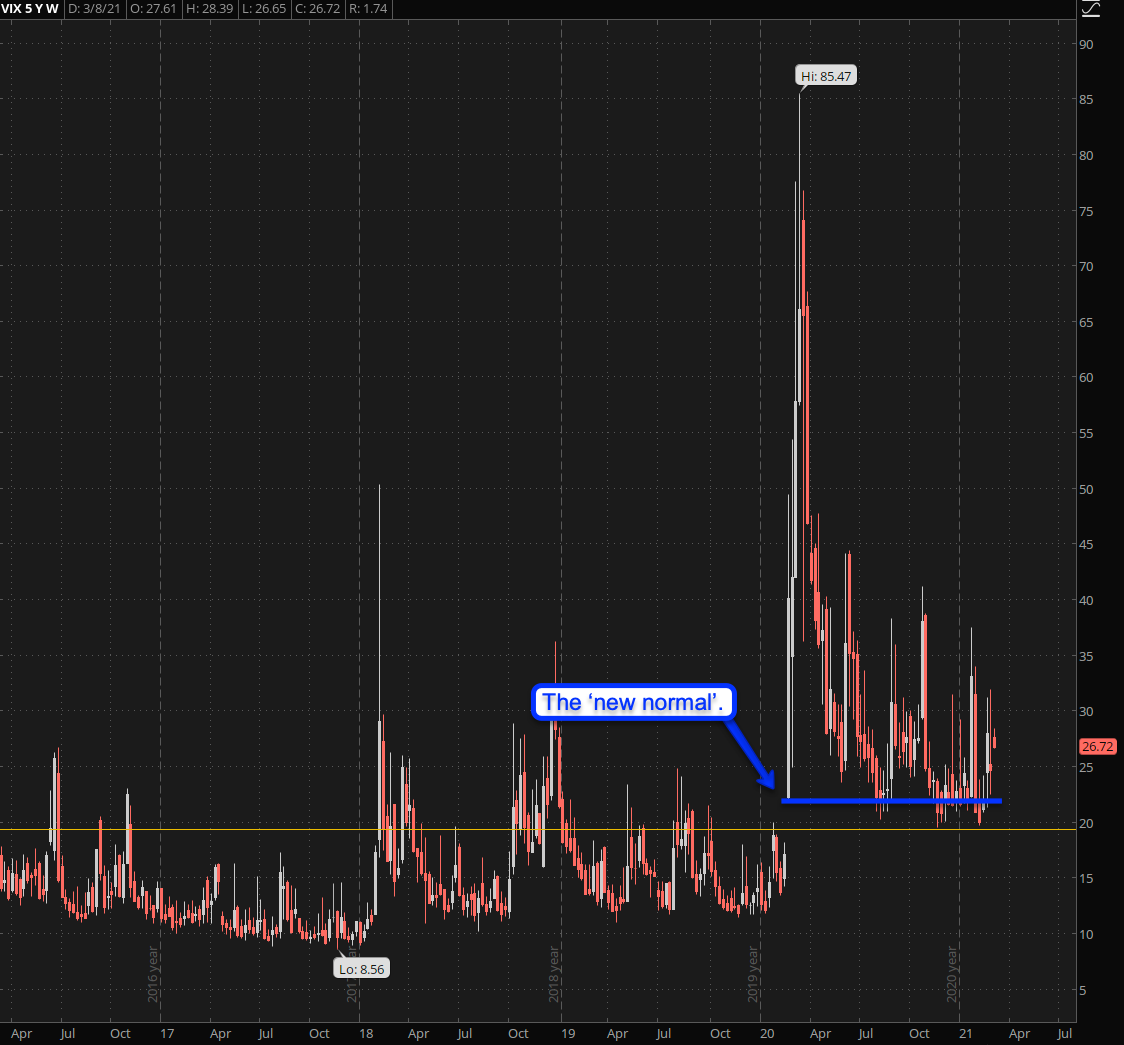 On the IV side of things the ‘new normal’ since the onset of COVID seems to be the 22 mark along with a marked uptick in realized volatility (see VVIX). If you had pointed at this chart a few years ago and told me that this would be the moment when retail would choose to pile back into the equities market (in record numbers I may add) then I would have channelled my inner McAuliffe: NUTS! 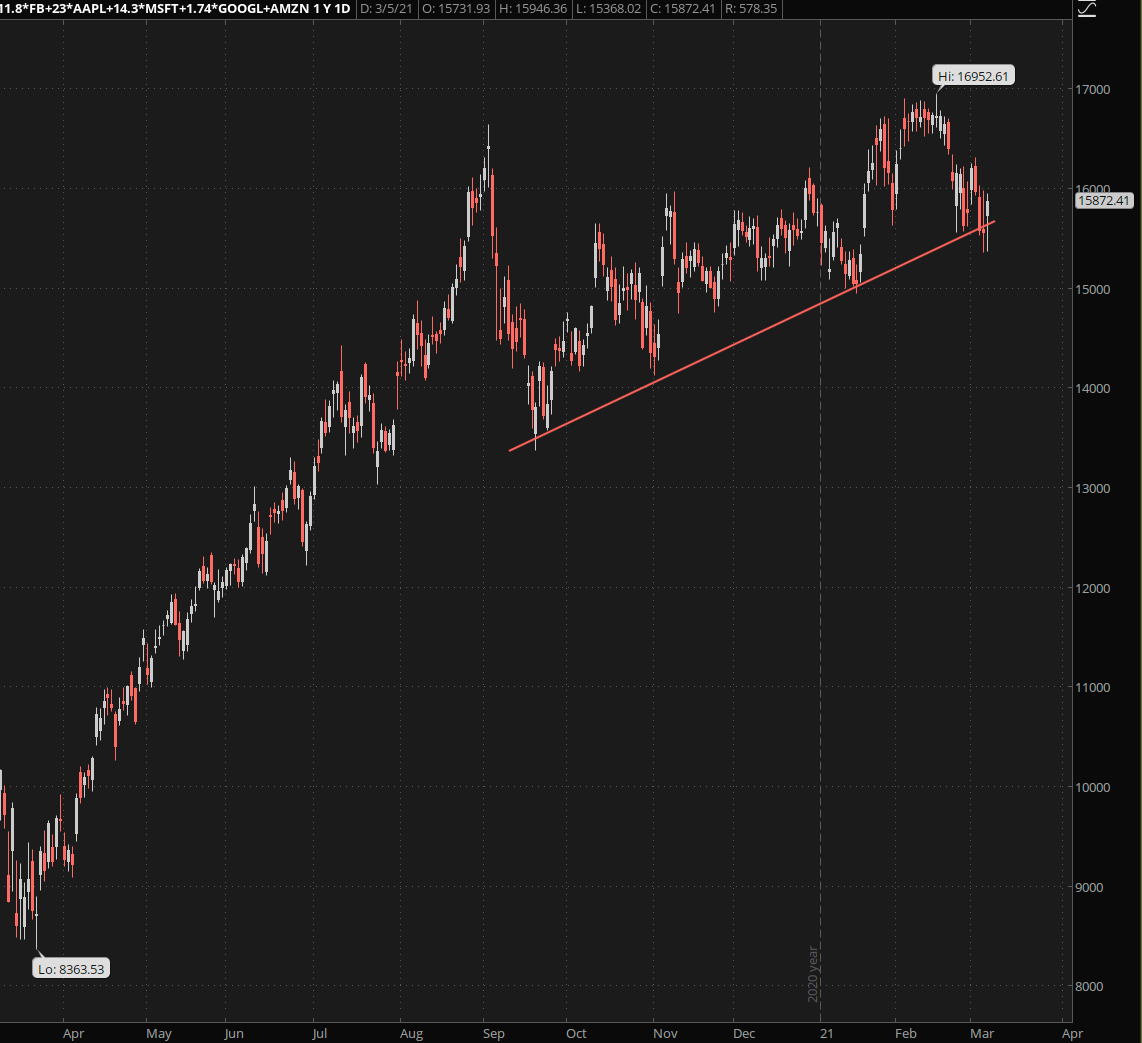 So while yet another stick save seems to be in process I feel compelled to issue a word of caution. Admittedly last Friday I presented a few Hail Mary long entries to my subs – mainly on the big tech side as I believe we are heading into yet another cycle of rotation, this time from finance back into big tech.

However at the same time I must stress that I am trading with very small position sizing at this point and my open positions all rank in the hundreds of Dollars and not in thousands. Why is that? Because if I woke up tomorrow and found the ES futures trading over 1000 handles lower I would be shocked of course but not overly surprised. In simple terms the upside potential at this moment does not offset the downside risk.

Of course that does not mean we won’t see new ATHs again but even if we do I’m pretty comfortable with waiting on the sidelines. At this point in time the present market environment compels capital preservation over capital growth.

TL;DR: Watch your six and don’t say I didn’t warn you if your trading account blows up in your face.