I’m sure you rats have heard of Ivan Petrovich Pavlov – if you didn’t have the luxury of a formal education let me enlighten you:

While Ivan Pavlov worked to unveil the secrets of the digestive system, he also studied what signals triggered related phenomena, such as the secretion of saliva. When a dog encounters food, saliva starts to pour from the salivary glands located in the back of its oral cavity. This saliva is needed in order to make the food easier to swallow. The fluid also contains enzymes that break down certain compounds in the food. In humans, for example, saliva contains the enzyme amylase, an effective processor of starch.

Pavlov became interested in studying reflexes when he saw that the dogs drooled without the proper stimulus. Although no food was in sight, their saliva still dribbled. It turned out that the dogs were reacting to lab coats. Every time the dogs were served food, the person who served the food was wearing a lab coat. Therefore, the dogs reacted as if food was on its way whenever they saw a lab coat.

In a series of experiments, Pavlov then tried to figure out how these phenomena were linked. For example, he struck a bell when the dogs were fed. If the bell was sounded in close association with their meal, the dogs learned to associate the sound of the bell with food. After a while, at the mere sound of the bell, they responded by drooling.

Now, don’t believe for a second that mental triggers are limited solely to the animal kingdom. Don’t believe me – think you’re purely rational? Alright, let’s do a little experiment:

Think about biting into a juicy lemon!

See what just happened? I personally felt a sour sensation on my tongue and there’s no lemon in sight. The same phenomenon occurs all the time and in various situations. Even when it comes to investing or trading the markets – no matter how smart you think you are. We are all creatures of habit and if we encounter a certain situation for long enough we eventually will get used to it and incorporate it into our mental framework. Case in point? Even we bears have become almost complacent in our anticipation of even higher tape – we’ve been burned so many times that we simply don’t want to touch that hot oven top even one more time. Every time we did – we got burned! So, going short equals pain – right? Of course not – timing if everything. But this type of mental predisposition is exactly what Curtis Faith refers to as one of the cognitive biases – in this case we are talking about a mixture of ‘recency bias’ and ‘loss aversion’.

Some will even miss a stimulus (no pun intended) once it’s gone – which probably explains some of the addict like behavior many traders exhibit once a long term trend turns in its tracks and takes out most or even all of the gains accumulated on the way up. And that is exactly what’s about to happen again – maybe not next week but most likely within this first quarter of 2010: 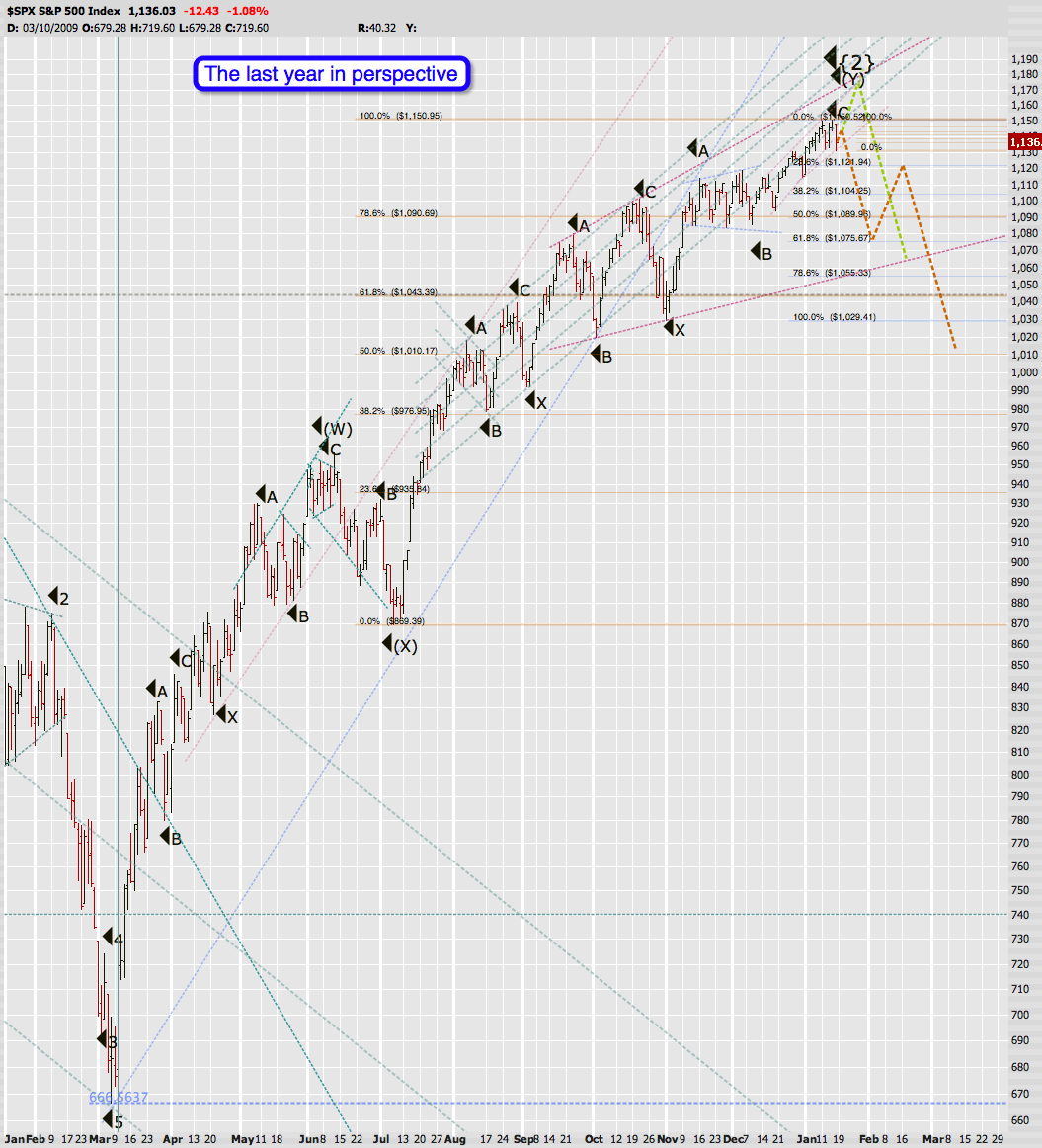 I have not bothered with the wave count for almost a month now – and the simple reason for that was that there was nothing to talk about (plus I was very busy). We needed a strong reversal to place some labels on our map and that came with Friday’s sharp drop to the downside. I’m sure that a bunch of folks betting on an expiry at 1150 still feel the sting today.

And although we might see a snap back on Monday or later this week the wave form in combination with various sentiment indicators dictates that this vapor rally is either over and done, or at least in its last throws. Yes, yes – that’s what I thought back in October and we got served a cold platter of kick ass. But the writing is now on the wall in the form of a looming withdrawal of the Fed IV drip that has kept this market on life support over the last year. Plus consider that avalanche of Alt-A mortgage resets ready to kick Wall Street in its collective groin all through 2010 and 2011. I’m sure you guys remember that mortgage reset chart behind my long term S&P outlook I posted a few months ago.

There is only one question you need to ask yourself today: Where is the real risk here, right now? Is it to the upside or is it to the downside?

Of course the slaughter scheduled for U.S. equities will not transpire in a matter of days or weeks. It will take months to play out – and thus we need to be clever and take into account how we can position ourselves with only minimum amount of risk and with a main focus on the medium and long term. Why? Because by the end of this year I expect the SPX to trade below the March 2009 low of 667. And by summer of 2011 we should be closer to 300, if not lower. An corrective third wave of the magnitude that lies ahead later this year has not been seen in over 80 years – it won’t be pretty and it will ruin the fortunes of many – unfortunately most of them innocent of the unmitigated greed and corruption that has afflicted Washington and Wall Street alike in the past decade. But that’s life – like in war economic crisis mostly affect the working class while the rulers and their cohorts sit things out in relative safety and luxury after having enriched themselves at the detriment of the majority. Is it fair? No, but unfortunately life is not fair – all you can do is to pay attention and push the odds in your favor a little. Which is what we do here – on a daily basis. 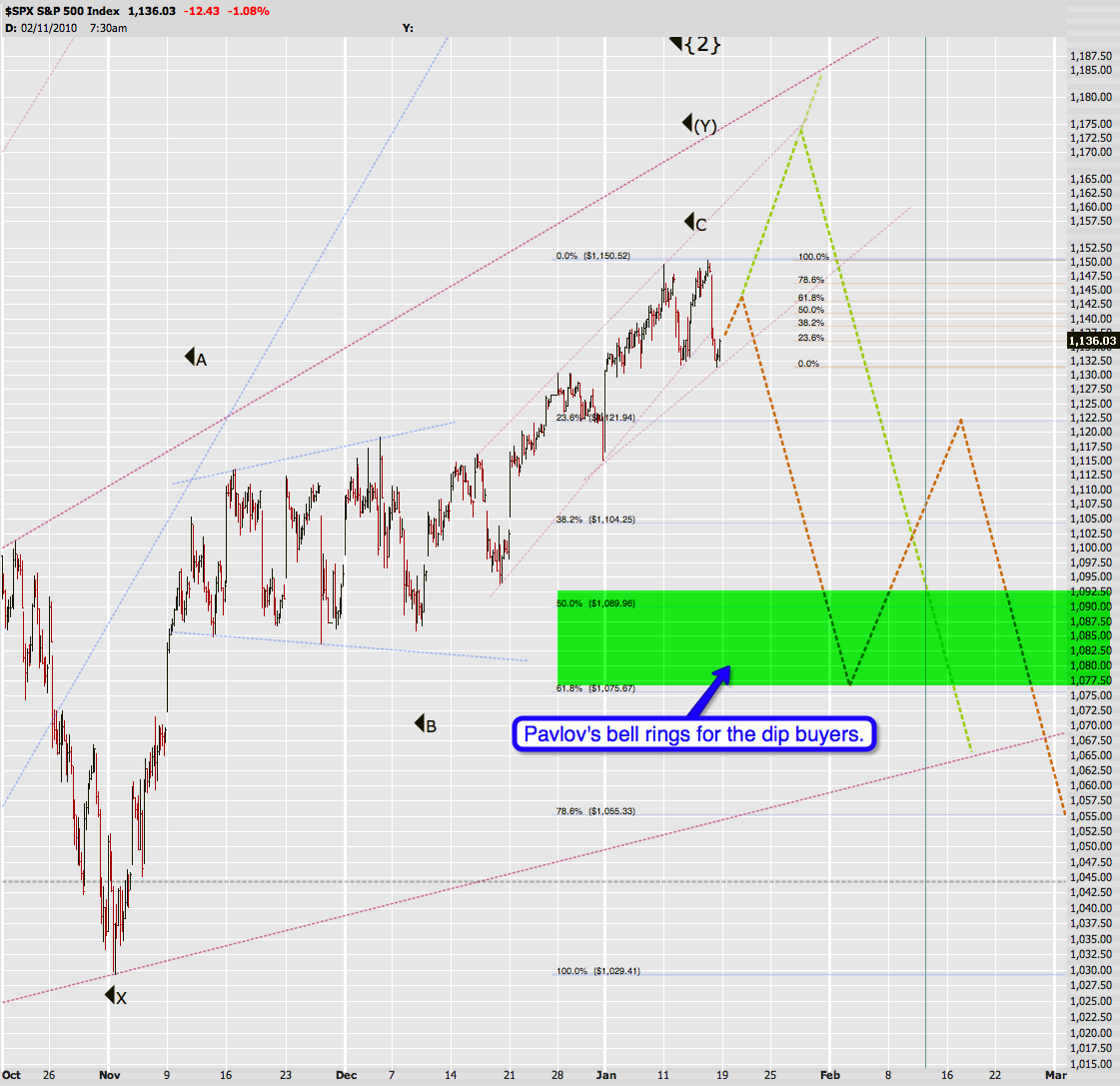 Short term we might see some flailing around on Monday or later in the week. Soylent Green is still a possibility and don’t fool yourself into believing that Soylent Orange is a ‘shoe in’ – look how far we have come and how little we have dropped last Friday. Yes, it felt like a big victory – but it was nothing but a little drop into the bucket after a ten month long bullish rave party. There is a chance the bulls blow their load and push this thing into 1180. Doesn’t have to happen but if you’re short term oriented – be cautious and make sure you don’t trade the big picture with short term options that drain blood (i.e. theta) faster than bull with a matador’s sword in his heart. Which btw, will be my job all this year 😉

The Investor Intelligence bull/bear ratio closed at 3.36 on January 12th – a new record for the past decade. Again, do you expect this ratio to push towards 3.5 or 3.8 before we turn? Possible – yes – but I keep pointing towards the long term here. I mean – wouldn’t now be a great time to think about hedging yourself to the downside? Option premiums are dirt cheap again and should we experience a correction to the downside the ensuing rip in volatility will be extremely profitable on the horizontal side of the option chain grid. Do I love long term options? No – actually I rarely trade them – but we are now finding ourselves in a very unique moment in time and each battle requires efficient weapons to come out the other end as victors.

I will talk about the Dollar tomorrow – running out of time here. But generally I don’t see anything in the way of the long term uptrend I have ben proposing for the old greenback for months now. It’s been a long time coming but thus far the developing wave form fits this general outlook. 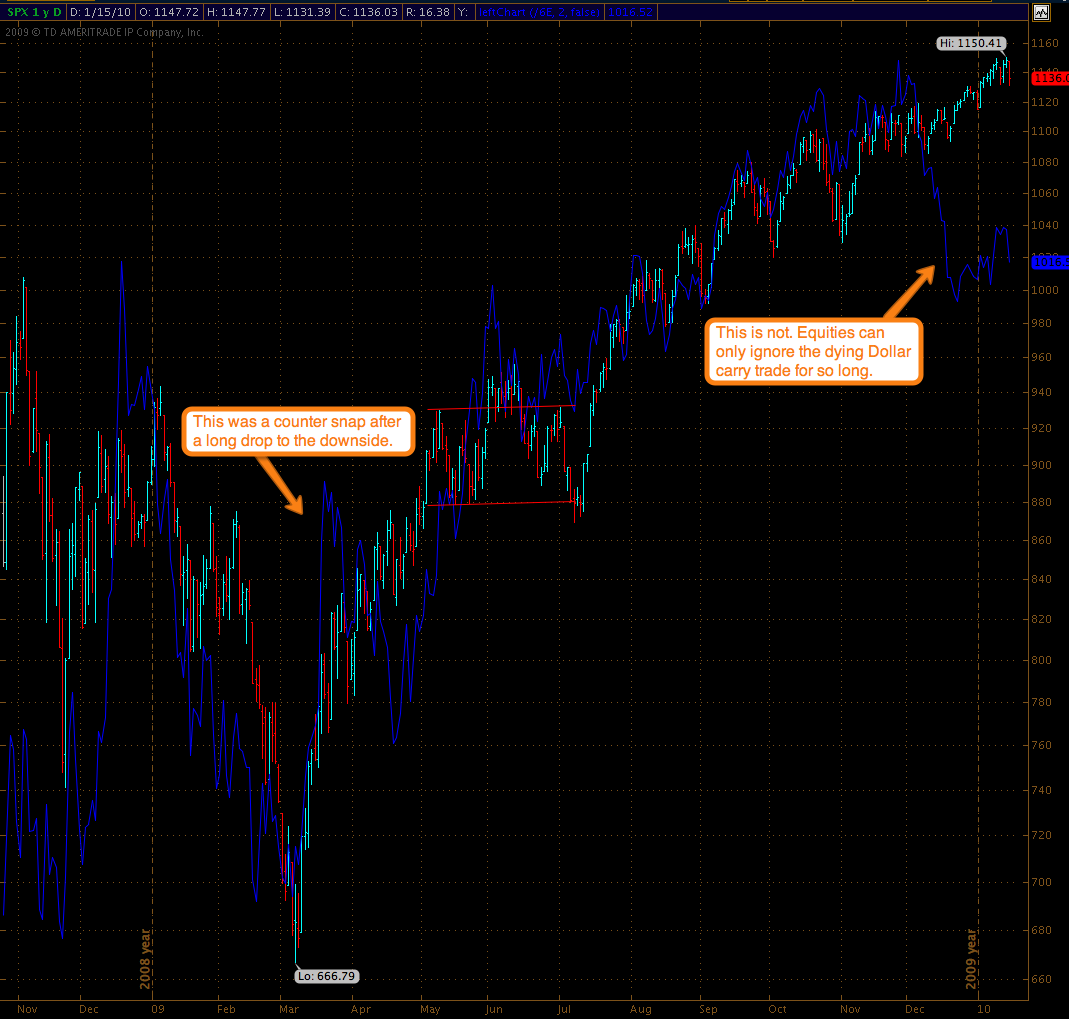 As stated on this Euro/SPX correlation chart – equities can only ignore the dying Dollar carry trade for so long. The thing about a reversing currency carry trade is that it’s all about leverage – at the very tail end a lot of leverage is required to sqeeze profits out of the short end of your trade. When it turns you don’t want to be the last one rushing for the door out. Expect more strength in the Dollar in the months to come – and that will add to the headwind – or should I say shitstorm – that equity traders will encounter all year long.

Before I go a piece of bad news. On Friday afternoon Bloomberg sent me a cease and desist letter in regards to the charts gmak has been posting in the past few weeks. Now, before you bitch and moan about Bloomberg let me point out that this is a very reasonable request and that I was under the impression that gmak had received permission from Bloomberg to post his charts here. It’s quite possible that they are only looking out for their intellectual property and eventually agree that gmak’s posts only serve as advertising of their professional services. As a matter of fact he had been in touch with Bloomberg about this – but as I understand it only on a verbal basis and no written permission was given. So give me a few days to get in touch with their representatives and sort this thing out. Gmak is of course free to post any of his commentary or any of his personal charts. But until further notice you will have to do without gmak’s early morning caffeine boost – sorry – that’s life.

Let me make it also clear that our website, our activities, our products and/or our services have neither been authorized nor endorsed by Bloomberg or any entity otherwise affiliated with Bloomberg.