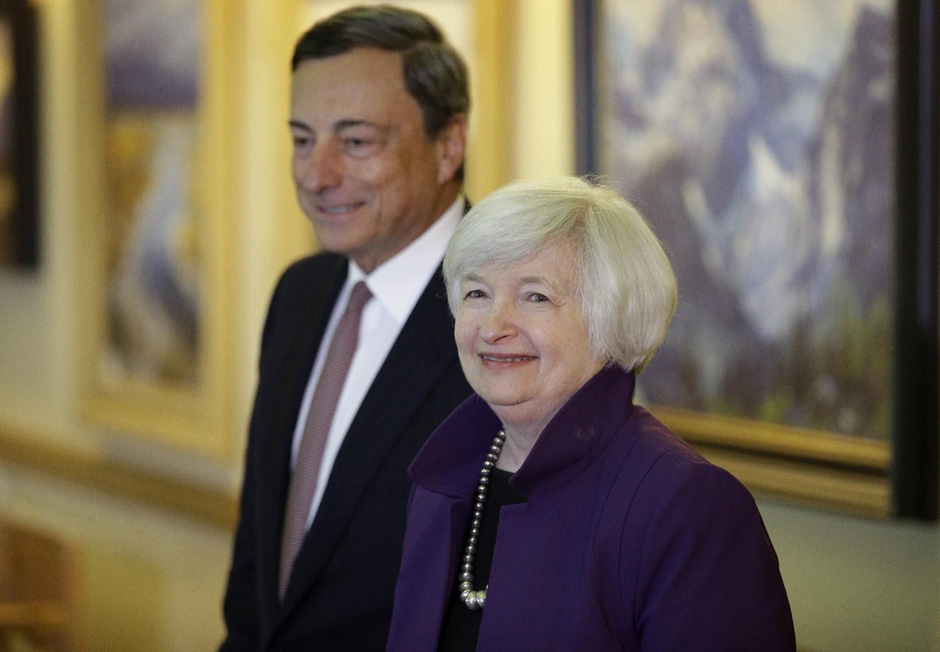 I don’t expect much movement over the next two days as traders are now shifting into a holding pattern in anticipation of the Jackson Hole meeting this coming Friday. Both Janet Yellen and Mario Draghi are scheduled to deliver speeches that day, which could potentially roil markets on both sides of the Atlantic. Of course beyond a momentary excuse for spiking volatility nobody really cares about what Yellen has to say anymore at this point, as she’s basically turned into the central banker equivalent of your problem tenant repeatedly promising to drop by that overdue rent check but never actually doing it.

Instead all eyes will be on Draghi in anticipation of another hawkish soundbite that may justify the 13% increase in the EUR/USD over the past six months. While the Federal Reserve is at least testing the waters regarding normalization the ECB is still purchasing assets at about €60 Billion per month whilst holding interest rates at low levels. So investors will want to know whether or not the ECB will begin winding down those asset purchases in the coming year. Personally I think they will head into the weekend disappointed as Draghi is not likely to again say anything that could launch another EUR/USD rocket like the one we got served back in June. Let’s remember that the ECB’s target rate for this year’s economic projections were based on a EUR/USD exchange rate of 1.08 and not 1.18 or even higher. A strengthening Euro will undercut inflation, which continues to run well below the ECB’s target. 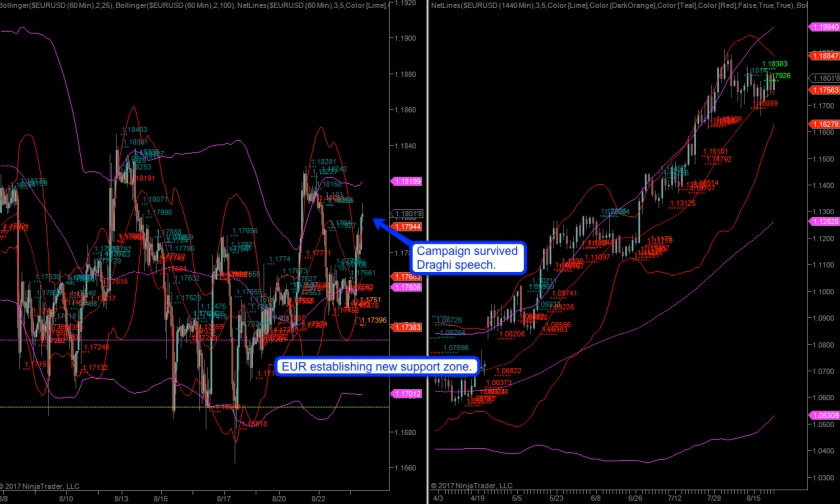 Speaking of which, our EUR/USD campaign survived Draghi’s speech earlier this morning (nothing happened) and although it’s starting to look a lot more solid I’m leaving my trail in place for now. Most likely it’ll just gyrate within the 100-hour Bollinger until Friday anyway. 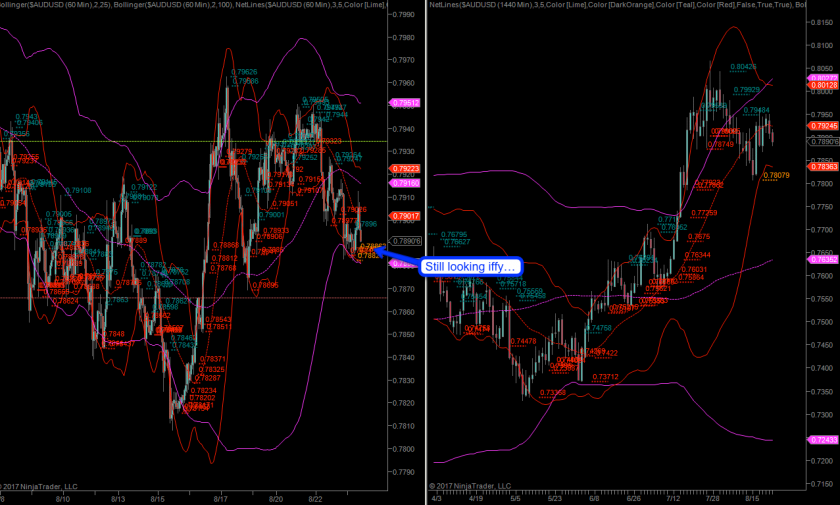 The AUD/USD campaign is also still in the running, however it’s looking a lot more iffy and may just join cable into a stop out. On paper this one is looking excellent on the daily panel but we’ve lost a lot of time here and the odds of a ramp higher from here before Friday are slim. Keeping my stop in place however as the rules are the rules, right? 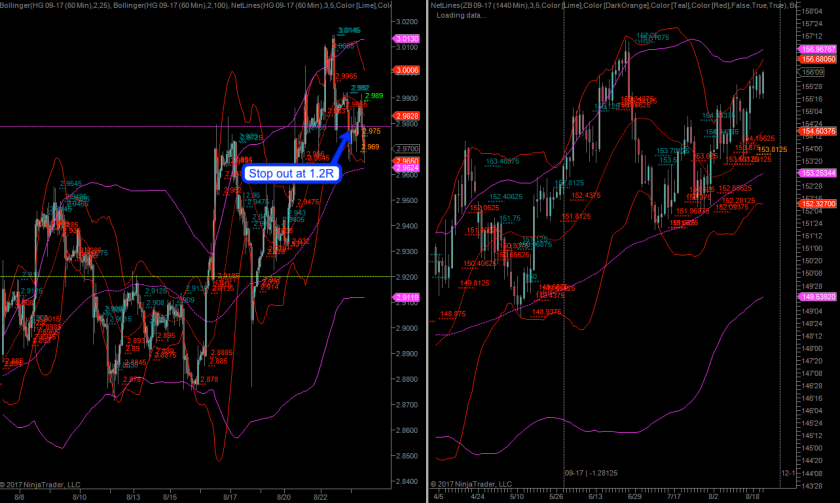 Copper got stopped out at 1.2R – not a huge win but a pretty passable one if you consider all the crazy gyrations it’s been plotting over the past week. I thought we had a runner here but it suddenly turned on a dime. All part of the game, no sense to waste time on complaining. 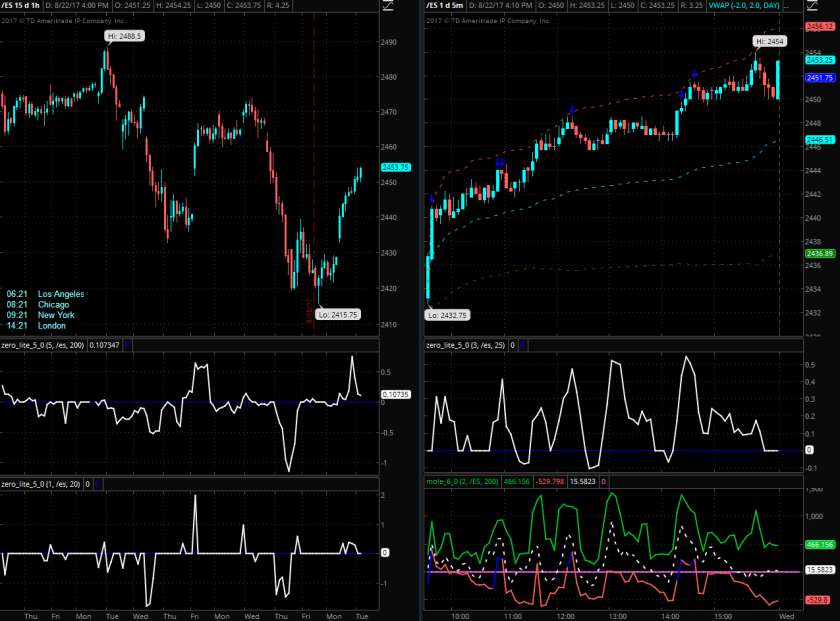 The E-Mini was heading steadily higher yesterday and the Zero signal only briefly dropped below Zero on three occasions. Not a strong trend session by any measure but it’s still vacation season and participation is seasonally slim during August. Plus historically it’s a flat month, so we shouldn’t complain. We’re opening lower today, so let’s see if it can keep it up or if we’re revisiting the lows. Which I personally wouldn’t mind of course 😉