Tell Me You Took The Gold Setup!

It’s election day and we finally we got some movement! I returned from the gym an hour ago and my chin dropped when I checked on old goldilocks. Apparently the three bears all took a steel toe Doc Martens to the crotch today: 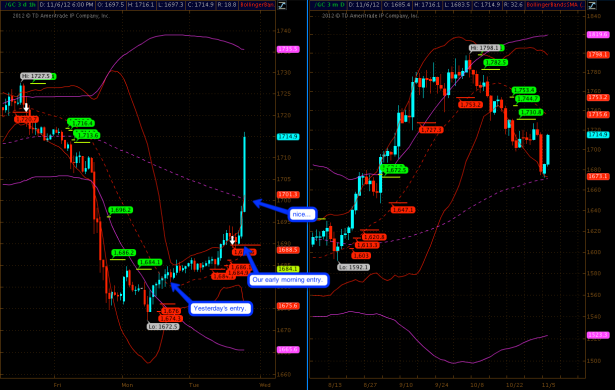 Wow – that’s quite a candle. Now if you were a sub this morning then you got a solid entry near 1688. And if you were a sub yesterday you get one near 1684. So my intrepid steel rats had not one but two opportunities to grab this one. And if you did not then please report to the Evil Speculator dungeon for a much needed mental adjustment.

By the way – since we’re on the subject: Were you short gold last week? Just sayin’… 😉 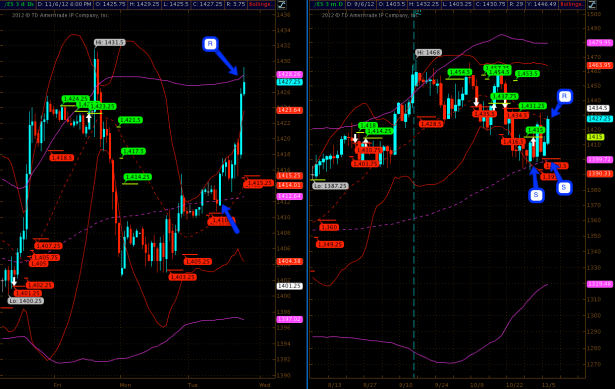 Moving on – the spoos breached the 100-hr overnight and are now bumping into hourly resistance as well as the 25-day SMA. That’s a good start but the real hurdle now will be clearing the SMA, which would be a good stepping stone for a Santa Rally. It’s good to see that our 100-day SMA held up – perhaps the bulls avoided a trip to Hades just once more. We shall see…

Setups setup setups – you ask and the Mole delivers. You can waste time chasing bad trades or you can just get with the program and start banking coin. It’s all the same to me as I need victims on the other side of my trades 😉 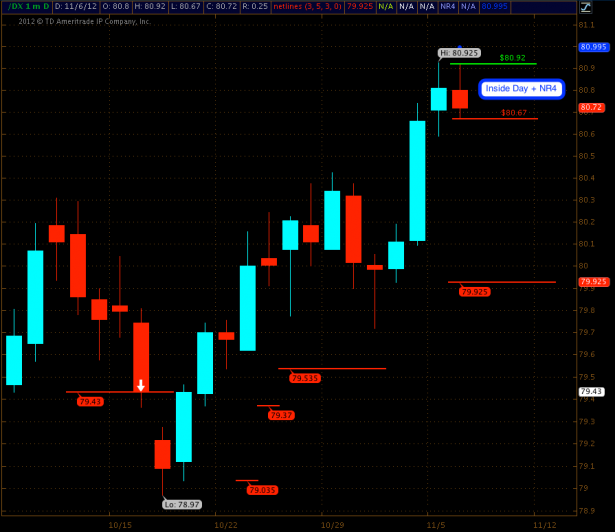 Since I’m in a good mood I’ll throw one out for free – here’s ole’ bucky painting not only an inside day candle but also an NR4, which means today is the smallest range in the past four days. Go get ’em champ! And if you don’t know what to do with that catcher’s mitt then direct your browser to my cheat sheet – it’s all there.
[amprotect=nonmember] More charts and non-biased commentary below for anyone donning a secret decoder ring. If you are interested in becoming a Gold member then don’t waste time and sign up here. And if you are a Zero or Geronimo subscriber it includes access to all Gold posts, so you actually get double the bang for your buck.
[/amprotect] [amprotect=1,13,9,12,5] 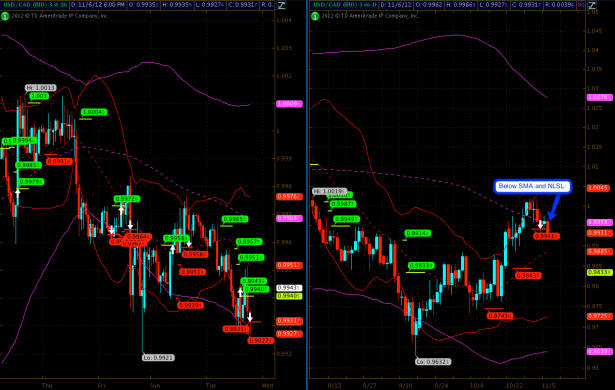 USD/CAD seems to be failing its NLSL and the 100-day SMA. I want to be short here of course with a stop below that dropping SMA. 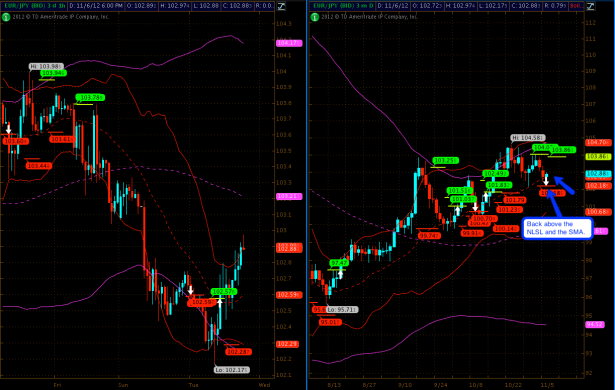 EUR/JPY kind of doing the inverse – just defended its NLSL and is now back above its 25-day SMA. Which means I’m long with a stop below. Trading does NOT have to be complicated. 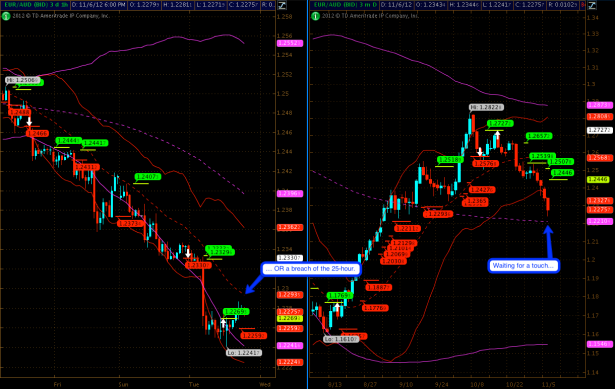 EUR/AUD – now that’s a clever one. Most of you guys (me included) would be happy to see a touch of the 100-day SMA. However, we may not get that – if we do I take it of course. But I would also take a breach of the 25-hour SMA, should it push higher from here. So either way we ought to get a decent entry 😉 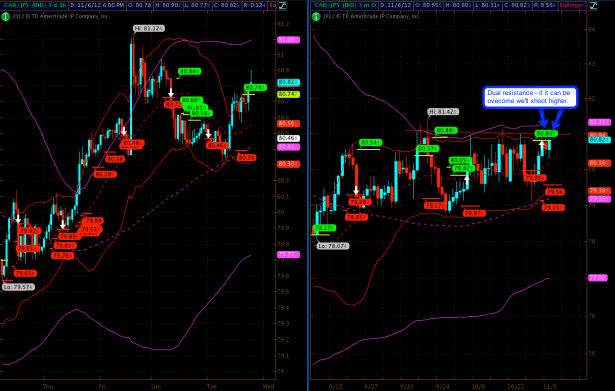 CAD/JPY – I have been thinking short thus far but it’s clinging to resistance. Actually I’m short right now but have my finger on the ‘switch coats’ button. A push above all that resistance could be golden – let’s hope it happens. 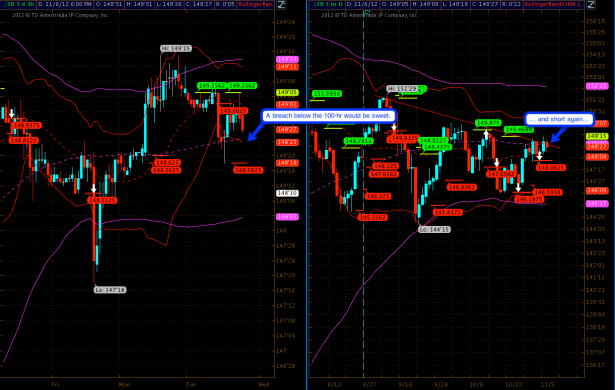 Bonds are running me all over – I’m short now with a stop above that resistance line. One of these days I’ll get some movement out of this thing. BTW, a drop through the 100-hour would be just what the doctor ordered. 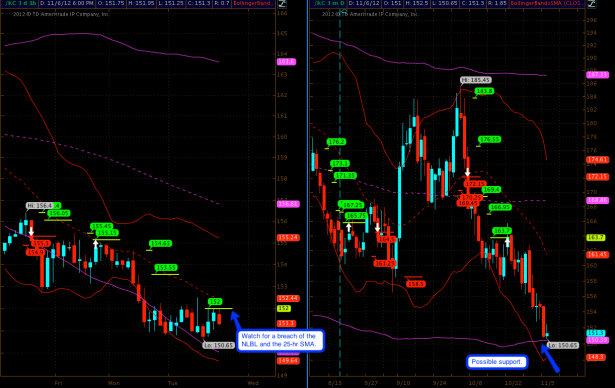 Coffee potentially finding daily support here. I am ready to take on that hourly NLBL should we breach it, in particular as the SMA is right above. 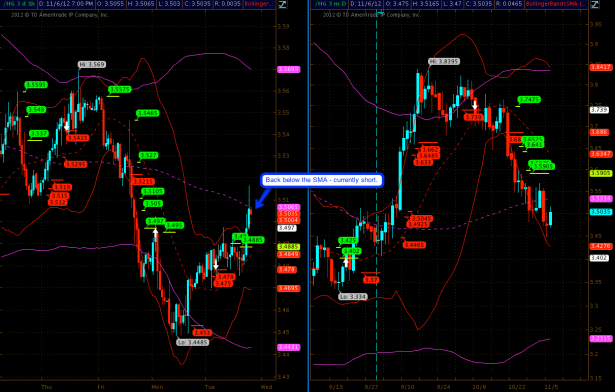 Copper – just dropped below the 100-hour. I was actually long but flipped it for a short with a stop above the SMA. This thing may test my patience – I know – but emotions are for losers and I’ll give it the Iceman treatment.

So… really – please tell me you took that gold setup guys! For the record – we had a great year trading gold thus far. And I don’t even care much about the shiny stuff. Or perhaps that’s why 😉