It’s Sunday and the Mole has yet again been handed the task to make sense out of the wild gyrations of the past week. Since I have posted quite a bit of meat covering the long term side lately I decided to talk solely in point & figure charts today. This is by design as we may still be in limbo territory and at this juncture it is crucial for us to keep a clear sight of various inflection points. If you are new to P&F charts then don’t despair – you can find an excellent and to the point tutorial (pun intended) over at stockcharts.com. I strongly recommend you read it – as a matter of fact I would deem it required reading for any self respecting steel rat. 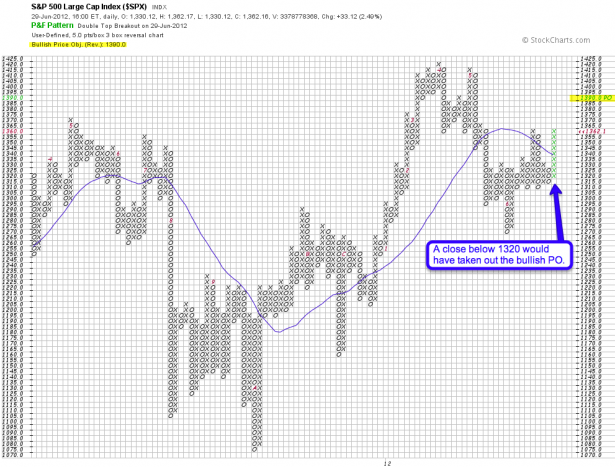 Just a week ago I posted this P&F chart of the SPX with a very simple message: Breach 1320 and that bullish price objective finds its ignominious demise in the big graveyard of dead charting setups. And despite all the Euro-trash drama permeating the financial news (most of which I of course ignored completely) this was my inflection point for a failure of the unfolding inverse H&S and of course a change in the ongoing long term trend.

Of course we got close – very close – but in the end the line held. Instead of the sell off the bears were salivating over we got served the summer short squeeze from hell. This goes to show how simple P&F charts can be your best friend in an hour of need. Even when rumor and emotions rule your trading day, clear inflection points as expressed by point & figure charts will keep you out of trouble.

Anyway, does this latest move mean we’ll take the express elevator to new highs in equities? I’m not so sure about that yet – let’s see what happens when we reach the 1390 price objective and then we’ll talk. Mind you there is a small chance that we reverse from here as we have not breached the previous high of 1363.46. But we should get a quick resolution of this in the next few trading days. If the longs stall here for more than the obligatory post squeeze sideways candle then we could see a reversal. However, that said – the odds now favor the bulls and I would be cautious about looking down. We are still in limbo theoretically but this could turn into a real rocket really fast.

Bottom Line: A breach of 1363.46 probably takes us to 1390. Once we get there we’ll re-assess based on velocity and momentum.

Quite a bit more below for the subs – please step into my ash covered summer lair (I’m not kidding – we have wild fires burning out of control just a few kilometers to the West of Valencia): 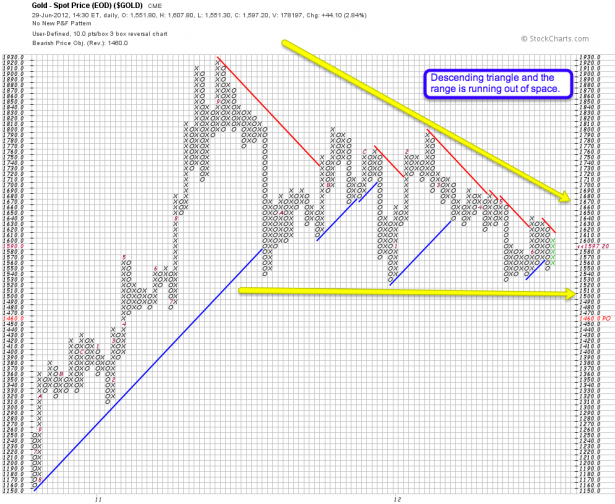 Let’s start with the shiny stuff – since its 2011 glory days gold has been in a bit of a rut, much to the chagrin of the gold bugs. But the worst may yet be on the horizon as our P&F shows a clear descending triangle formation. And yes – that ain’t bullish. The trading range has been compressing and we now are looking at two inflection points: 1530 and 1620. On the upside we would have to breach 1620 to invalidate that bearish price objective of 1480. I think 1640 would be where the longs would get some real traction and the after burners may flip into short squeeze rocket mode. On the downside a breach of 1550 and then 1530 would most likely lead us to our bearish PO. Until any of that happens we remain in this sideways slow roast. Don’t get involved until you see gold pick a clear direction. 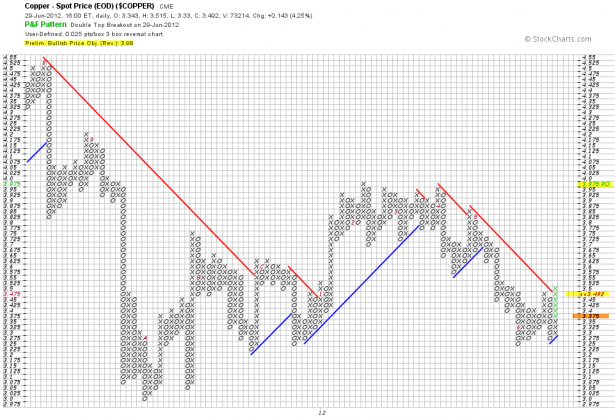 Copper seems to be ready to jump higher here. I say seems as nothing really happens until we close above 3.5 – we could still see a last minute reversal here. If that’s what winds up happening then note that the odds support the longs until we close below 3.38ish. And yes, a breach of 3.25 will kill this bullish PO and lead us lower. 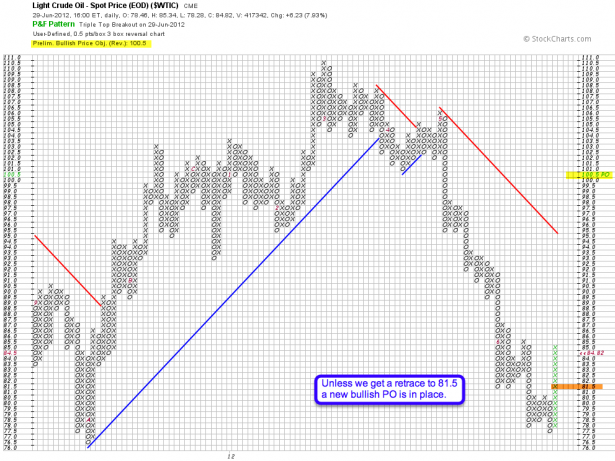 Crude was literally on fire last Friday – that candle must have been burning a lot of shorts. Frankly I’m a bit miffed as I posted about a sweet long setup which then got stopped out by a last minute fake out move to the downside. Of course I’m bringing this up for a reason – it serves as a great learning experience I hope you will take to heart: You will miss excellent setups – period. No matter how smart, how talented, or how lucky you are – fake-outs like these are going to happen to you. The trick is to not dwell on them. Yes, a long position would have made a fortune – and yes, maybe you got stopped out just by a few ticks before the rocket took off to the upside. Instead of lingering over missed trades console yourself by repeating this old aphorism: It’s better to wish being in a trade then wishing to be out of one. Now forget about this and move on – there will be great setups in the future and if you pay attention and remained disciplined you may just catch them.

Now regarding the chart. I don’t have to tell you that this was a bullish move and it’s very hard to determine what happens next. What I can tell you however is that it would take a reversal to 81.5 to flag a high pole reversal warning (you can read up on those in the same stockcharts tutorial I mentioned in the intro). That would not yet invalidate the bullish PO but would put crude on notice. 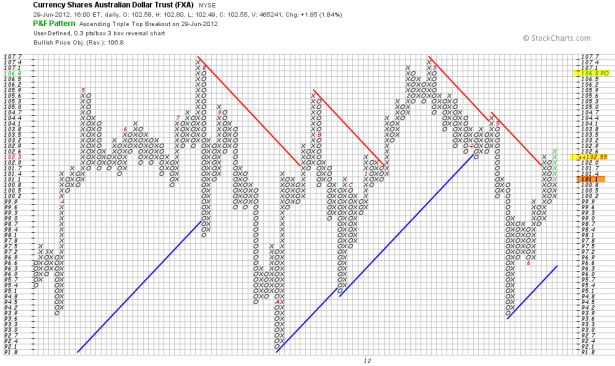 Let’s talk currencies – here we got the FXA, which is an ETF that traces the Aussie Dollar. I don’t think you need to be an experienced P&F reader in order to recognize the bullish potential here. And it would take a plunge below 101 to put the current break-out in question. I think this is a pretty nice spot to be long and if you pull up the AUD/JPY then you’ll see a 100-day SMA at 82.78. A breach of that would be my confirmation signal for a push higher well into the bullish PO. FYI – on FXA that 100-day SMA is pretty near-by but when it comes to inflection points I don’t trust currency ETFs for many reasons. If you don’t know why please ask away in the comment section – this is a lesson many of our intrepid rats have learned the hard way. 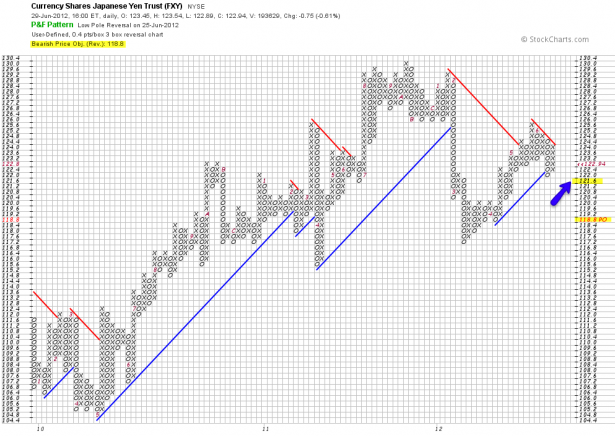 Here’s the Yen donning a bearish PO. Pretty simple chart IMNHO – a drop below 121.5ish should get us to our 119 target. And conveniently we do have a limited range here as well as a push above 124.5 would change the dynamics considerably. At minimum it would invalidate the bullish PO. See, P&F charts are not as complicated as you may have thought 😉 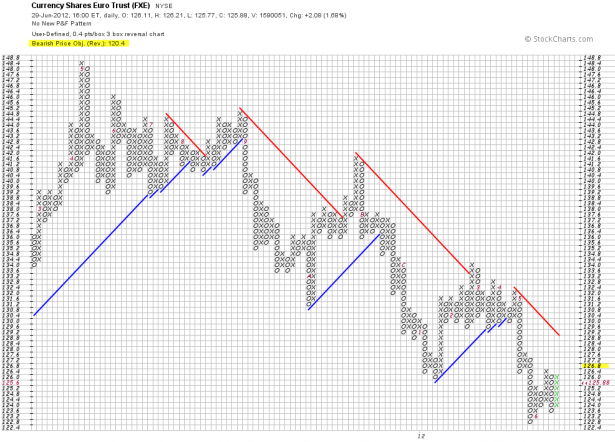 And last but not least – the Euro. I have been posting DX P&F charts ($USD on stockcharts) but I never really liked them very much. Truth be told I have a hard time configuring it to express what I want to see. My P&F charts have to contain enough detail but not overwhelm – the box size needs to be right so that the chart won’t get too shallow and it’s important that inflection points are clearly visible. Frankly, it’s as much art as science and if you get used to setting them yourself (stockcharts has default settings) you will probably burn many hours trying to get them right.

In any case – today I instead plotted the FXE (i.e. Euro) and I really like it. Seems that we barely missed out bearish PO and are now forming what may turn into a floor pattern. A breach of 127 will probably lead us higher – the next resistance cluster I see is around 128.8. Now on the daily EUR/USD chart I see a falling 100-day SMA that would meet us soon near 1.29 – so that seems to match up nicely. Let’s see if we get there and then think about what may happen next. Especially in the low vol summer season it’s best to take things one week at a time.

I hope you enjoyed our P&F roll call – if you compare them with your daily or long term charts I am sure you start seeing valuable correlations or inflection points you may have missed before. Either way – it’s good to be able to read them and whenever the signal to noise ratio gets out of control break open a cold one and spend some time stepping your own little P&F collection. I am sure you will walk away with a bit more clarity and a better idea of the bigger picture.