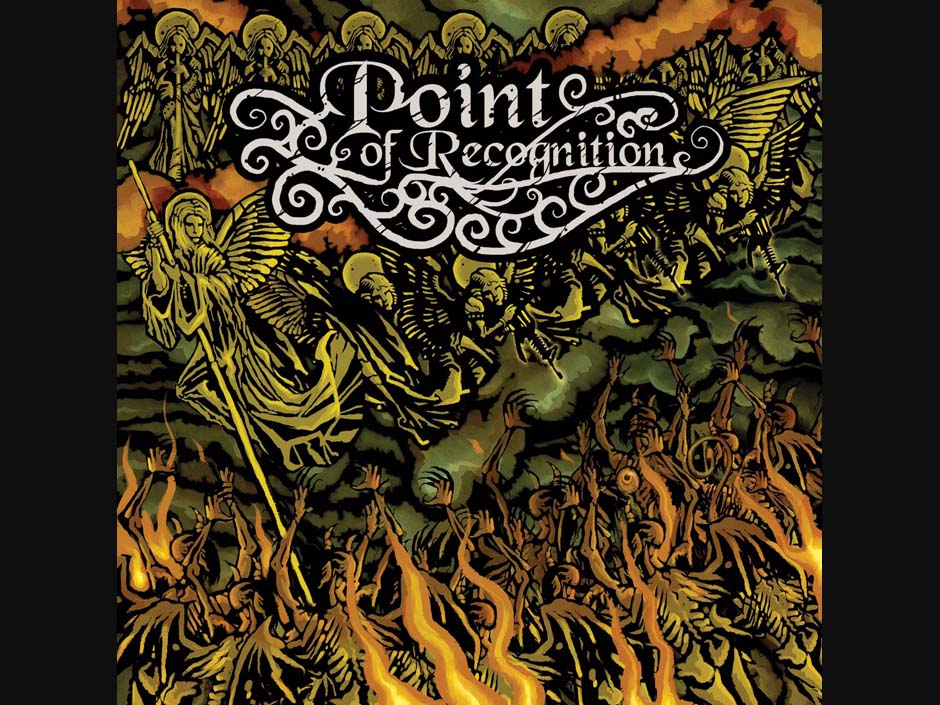 Well it didn’t take very long. Ms. Market showed little patience for Mole’s monkey business and quickly proceeded to wiped her backside with his lottery long ticket. Which of course was to be expected – as you recall in yesterday’s early morning update I made no secret of the fact that this entry was a Hail Mary pass at the last stop before the abyss. It’ll get a lot uglier from here until it’ll get better again. 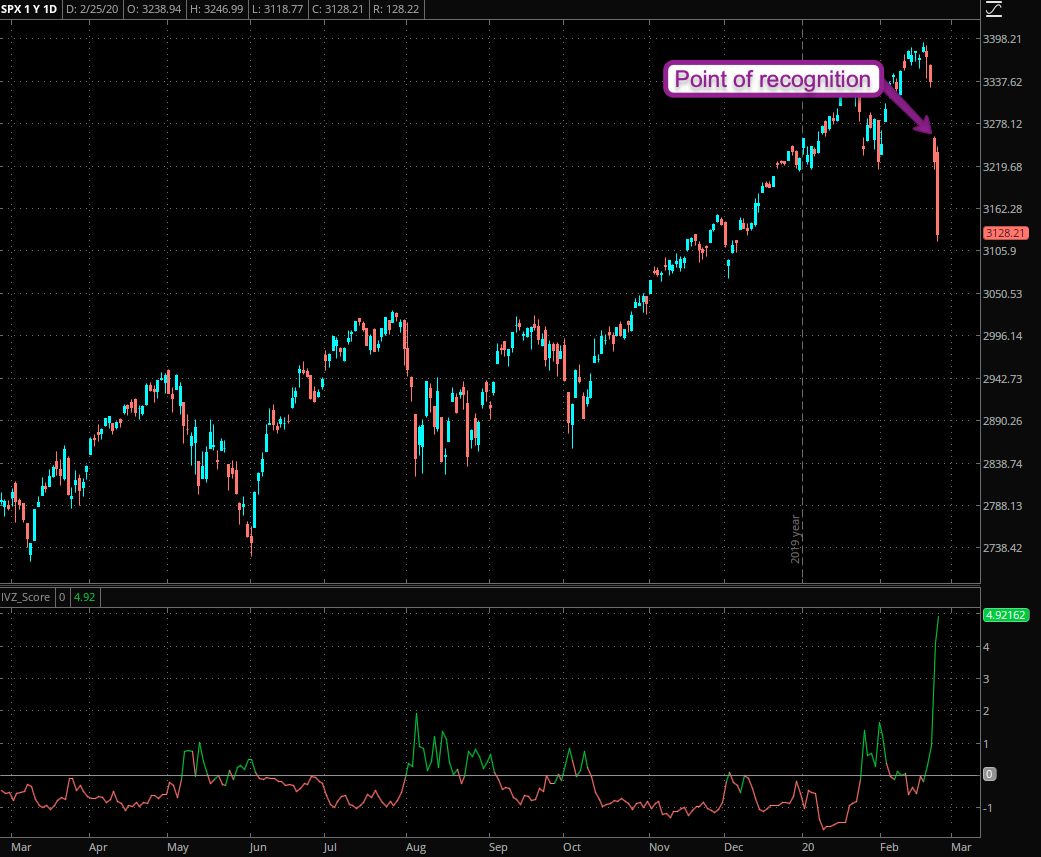 Of course the reason why the odds of an instant reversal were very low was due to the massive gap lower at the open which then remained unchallenged for the remainder of the Monday session.

Had there been sufficient pushback that day there may have been a chance to spare us the pain that unfolded on Tuesday, but alas it was not to be. And as I already pointed out in the comment section yesterday: a big cleansing was long overdue plus the writing had been on the wall for quite a wall (if nothing else see my posts last week).

Note how our IVZ-score indicator spiked all the way to 4.9 which means that implied volatility has approached the 5 standard deviation mark. Not something you see every day… 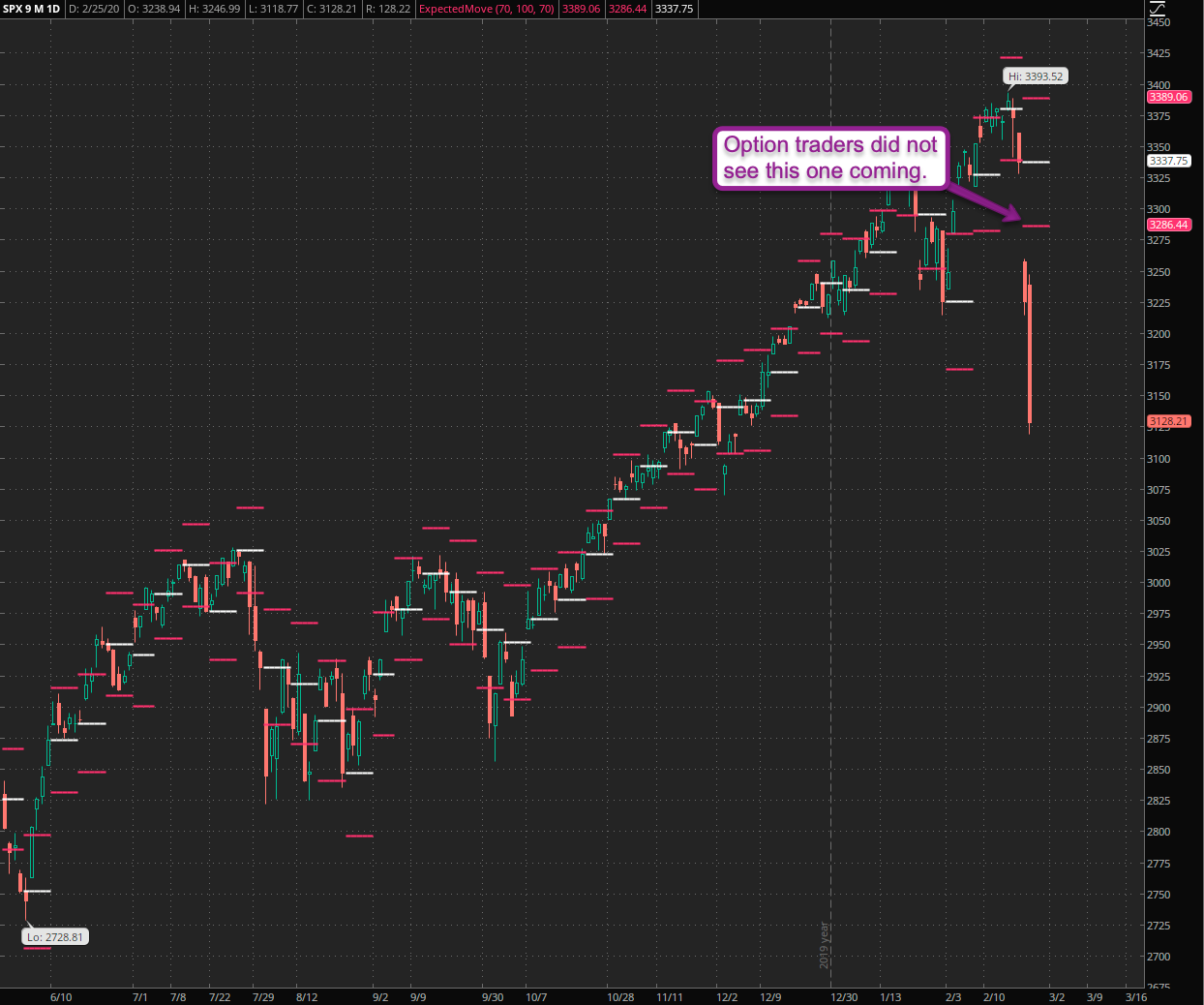 What’s fascinating is that option traders seemed to have been completely asleep at the wheel as exhibited by the expected move for this Friday’s expiration. The lower range was around SPX 3286 and we blasted through that one on Tuesday already and never looked back.

Given the expansion in IV over the preceding week this is something option traders should have been prepared for, which goes to show that implied volatility is good for some level of risk management but is far short of being a crystal ball. 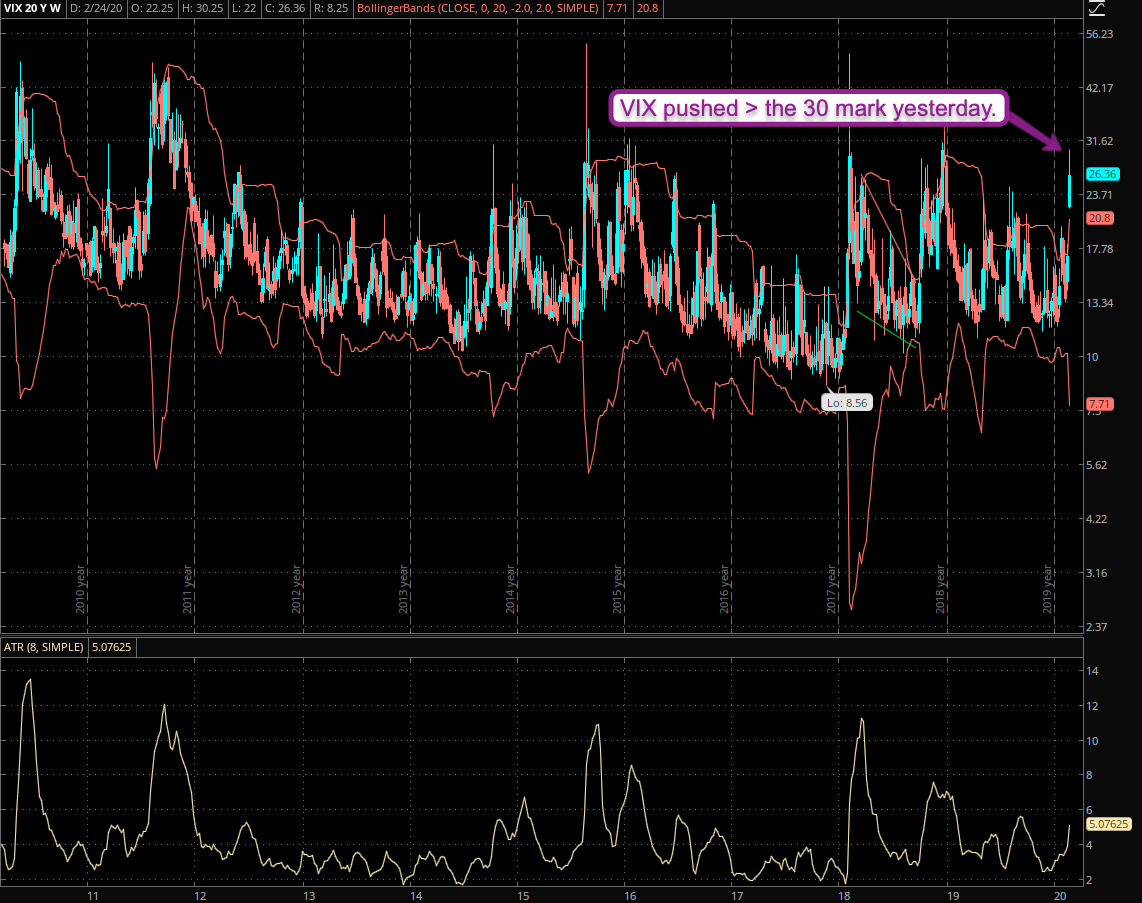 This is not the first time this happens after all, and if you have been around the block a few times then you probably recall that the VIX gets it wrong pretty much every single time.

Note that it spiked above the 30 mark which to my count is only the fifth time since 2011. Something tells me that we’ll have to wait for a credible VIX buy signal (noobs – it’s relative to equities).

As you may have guessed it’s a bit more elevated today – although there are only three more sessions remaining the EM is still at 9.256 or 40.22%! The following contracts are no slouches either ranging from 33% for the Monday, 33.9 for the Wednesday, and 33.31 for the Friday expiration.

If you’re been holding puts you’ve banked some massive coin and if you’re been selling them naked (which I have been watching many YT trading gurus advertise over the past few months) then you’re basically belly up floating in the water. 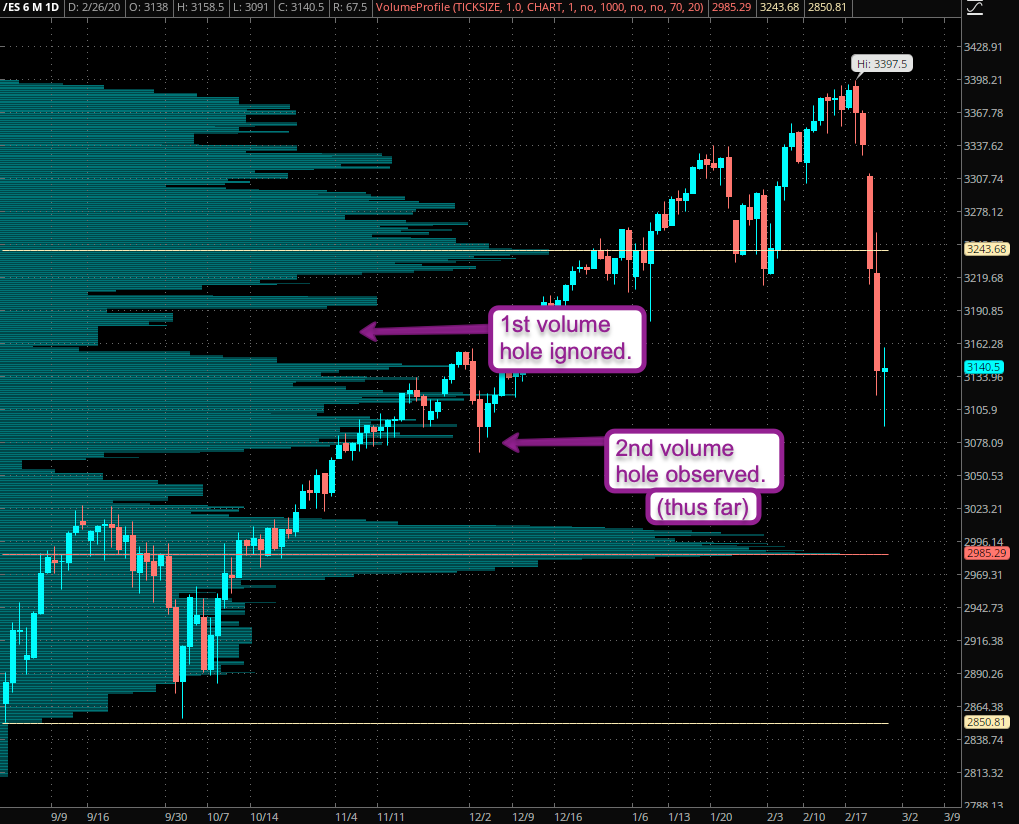 Now where do we go from here you ask? I have no crystal ball but I can pretty much guarantee you that at least this leg of the bull market is over and done. The question we should ask is how much pain we get to endure before it gets better.

The Tuesday Monday gap lower is what old school market analysts would refer to as the ‘point of recognition’ after which the market’s sentiment quickly flips from greed into fear mode. With covid-19 now having arrived in my own city I can only imagine how bad it’s going to get over here in Europe and perhaps also stateside.

The chart above shows us a bounce at the 2nd volume hole or slightly above it. However if the 3k mark goes I think we may see a rush to the exits that may be reminiscent of what transpired back in 2008 or at least back in 2015. 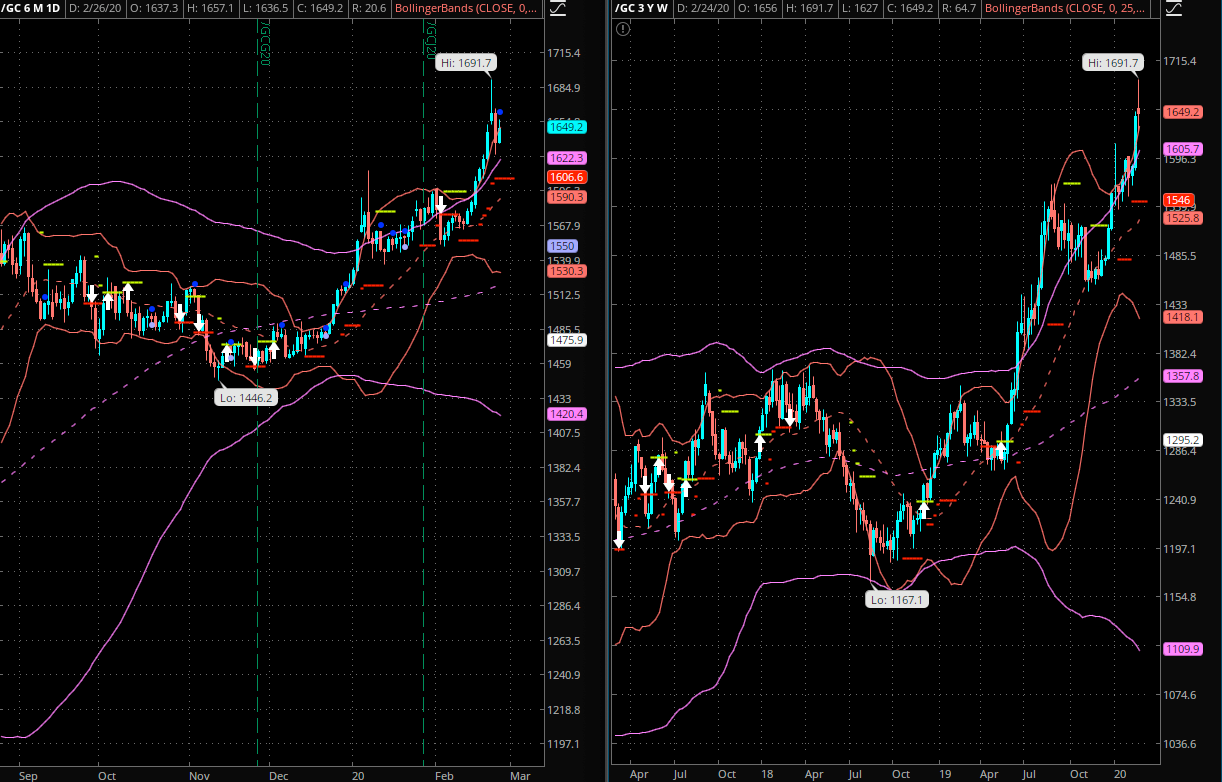 Some of my readers seemed surprised that gold and bonds were also selling off and suspected fowl play or manipulation. I would disagree on that end and can offer an alternate explication based on my experience during the 2008/2009 crisis:

Many traders and fund managers may have faced massive margin calls over the past two sessions and thus were forced to liquidate secondary still profitable assets. 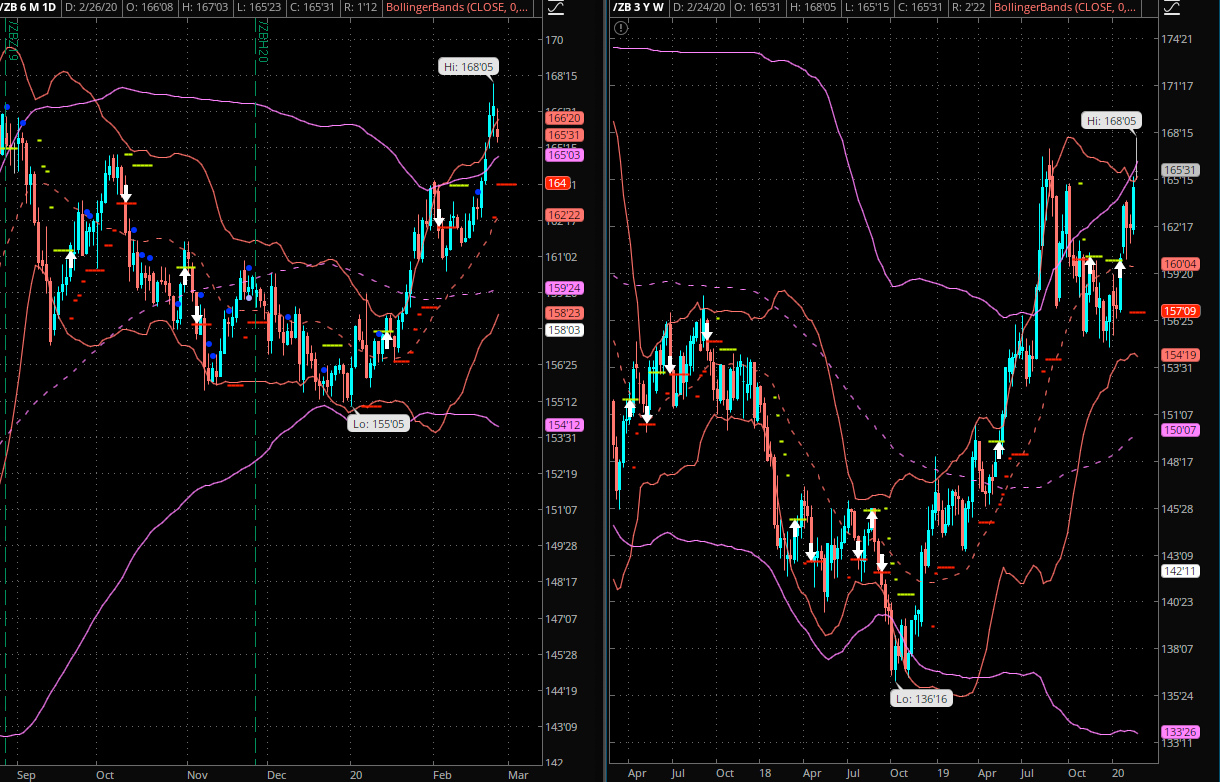 Bonds behaved similarly which supports my theory. Of course if that is true then it almost guarantees further carnage in the days and weeks to come as traders are going to be pretty trigger happy when it comes to any rip higher or continued slides to the downside.

Therefore what we can expect moving forward is a high volatility market that will make the past few weeks look like child’s play. If you are young/inexperienced trader who has never faced such conditions I suggest you step to the sidelines and pay close attention.

Now I won’t sit here and be all sanctimonious by claiming that it’s impossible to make small fortunes trading such market conditions, but boy does it take a) skill, b) pain tolerance, and c) mental fortitude. A few weeks ago I did suggest to everyone that this bull market would burn itself out in a high volatility fashion and it seems that – unfortunately – I was proven right.

So heed my warnings and if you insists on participating then keep your exposure to a level that allows you to sleep soundly at night expecting to lose it all in one quick stop run.