Before I left for my MA seminar in the morning I took a peek at the spoos and made a mental note that we had touched the lower 25-day BB line during the night. When I returned this afternoon I was very curious as to where we had ended up and frankly was a bit surprised to see a systematic sell off throughout the remainder of the session. I’m always eager to admit that I have no crystal ball – for me it’s all about probabilities at important inflection points.

When I started to dig a bit deeper it however things started to make a lot more sense. Now, to be clear I am not going to call for a bottom here. But what I am proposing is the possibility of a bear trap based on certain underlying characteristics I’m seeing in the tape. If I’m wrong, well then we’ll breach last night’s low very soon and I will flip my trading direction. If I’m right we’ll get a cheap entry at what must look like pretty bearish tape to most market participants. I don’t care if I’m right or if I’m wrong, because either way I will win on acceleration, which I believe has pretty high odds of occuring. As I said already – the name of the game is to be active at inflection points – let me show you what I mean: 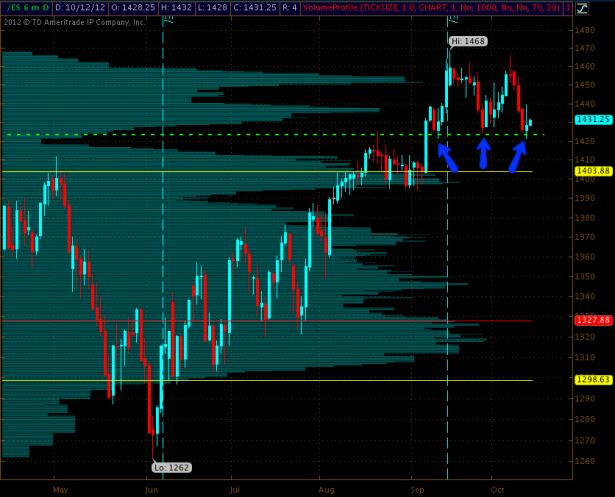 Three charts of note – the first one is my volume profile and thus far we seem to be holding right where participation is dropping off at the abyss. 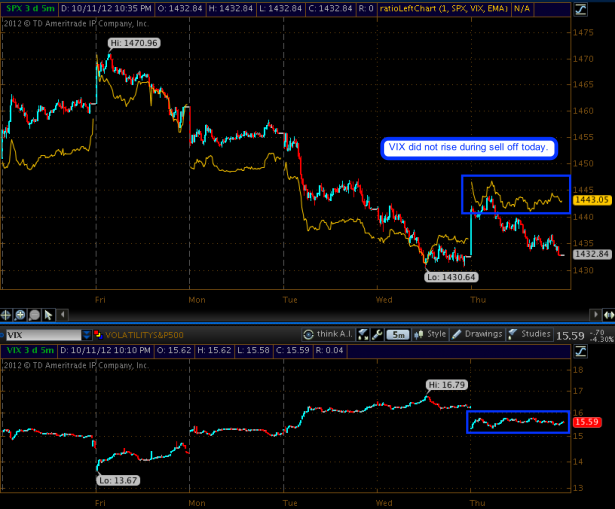 However what really caught my attention was the SPX/VIX ratio. Note that we did sell off for the most of the session but curiously volatility was not being priced up. Do market makers know something I may not? They usually do but I’m on to those guys 😉 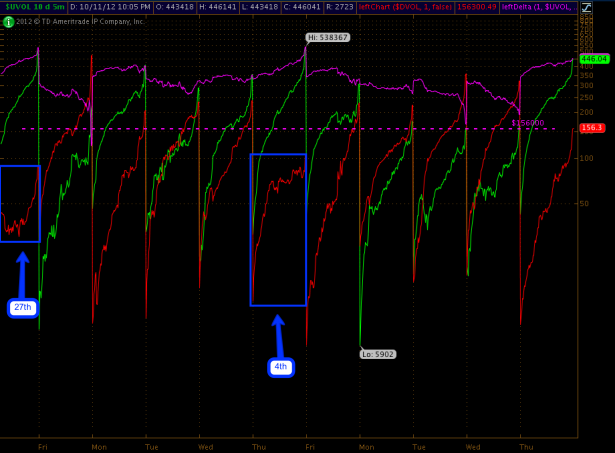 Now here are my NYSE volume plots. We did sell off for most of the day but nevertheless UVOL far outweighed DVOL.  You can see the ratio comfortably rising all day. Even more interesting – in the past two weeks we only finished with less DVOL on two occasions – both happen to be a Thursday (I’m not reading much into that btw). 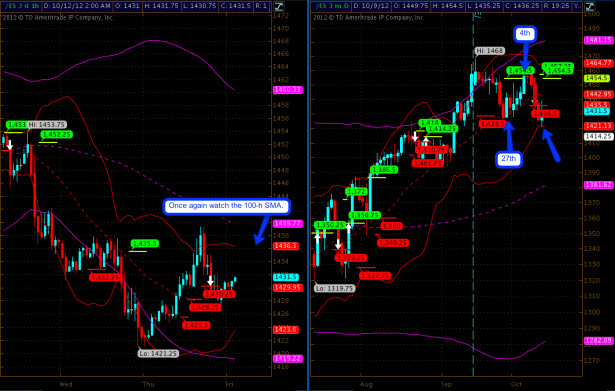 Here’s my Net-Lines chart – as you can see here we touched that 25-day BB overnight and then jumped higher. What works in our favor is that the BB is rising and thus price will have to keep up or it will left behind and possibly lose momentum. I have also pointed out the two days on which DVOL was lower. Both were pretty strong up days as you can see.

Now, as I already mentioned – I’m not into bottom calling – that’s a fool’s game. But I do consider this a very cheap opportunity to be long equities and I am very comfortable being either right or wrong as we have a lot of movement combined with support zones that will either hold or break in a matter of a day or two. Long positions here are cheaply defended as the BB (and SMAs) are rising.

Should I be wrong then we’ll know very quickly and I would have no compunction to flip my exposure to the downside. For the noobs among you it’s important to realize the difference in approach here. I’m not making big bets on some mysterious astronomical formation that is supposedly guaranteed to define a turning point. That’s how losers trade – they go out, acquire an opinion, and then old on to it even if it means the demise of their trading capital. I on the other hand look at inflection points at various time intervals and when I see a pattern or a correlation then I know that I have a slight statistical advantage.

When I’m wind up on the right side of the tape I often see you guys congratulating me. It’s nice for my ego and it goes down smooth but – heck – like you I had no idea this would happen! All I did was find an inflection point and got positioned. A well trained monkey could do that – or a stainless steel rat 😉 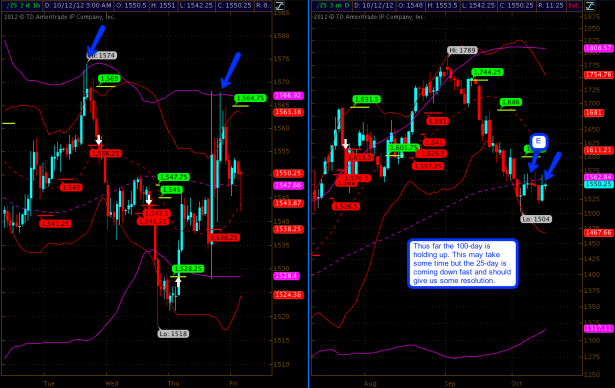 Soybeans – thus far the 100-day is holding up. I like those hourly BB touches on the left panel. We got a good entry here the other day and there’s nothing to do but to wait and see. 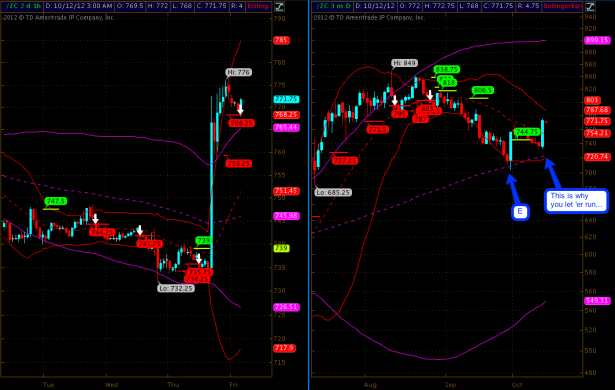 Here’s a good example of just that. Last week we took an entry on corn and it’s been playing sideways churn from hell after a promising initial spike. Today it hopped over the 25-day and ran up fast – now we have two SMAs supporting our long trade. This is why you don’t over think your positions – take your entry, set your stop, consider a target and then move on.

It’s called the nursery not because you’re holding the bottle and spank it’s bottom after every burp. Consider it to be more like a nursery for plants. You lay the seed, add good soil and some water and make sure it’s getting light. But once you’ve done that there’s not much to do. They do grow (or die) without you futzing with them all day. If you give those plants too much attention they may actually suffer. 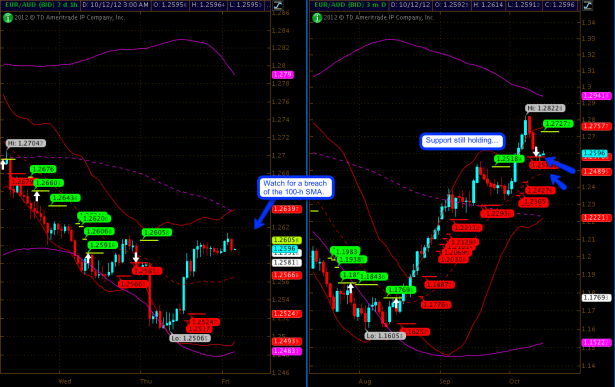 I actually ran into a ton of charts tonight, so for the rest of my post I’m going to be talking mostly in charts. Mrs. Evil is waiting with dinner and it’s not wise to incur her wrath, if you know what I mean. EUR/AUD still sitting on support at the NLSL – the 25-day is also pushing up hard. Watch the 100-hr SMA – I think it will be decider and it’s great to get positioned long either here or on a breach of the 100-hr SMA. If she drops below the daily NLSL be short. 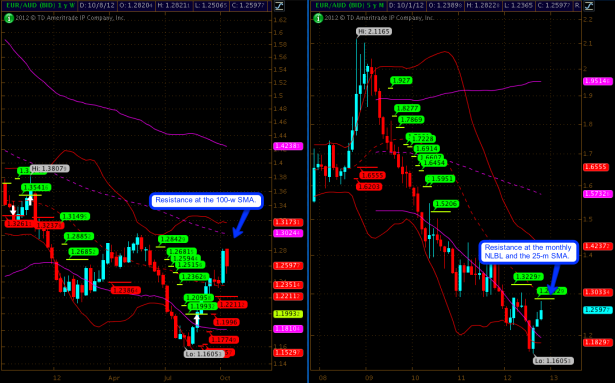 The monthly by the way is worth watching as well – as you can see we are facing weekly and monthly resistance. So a run higher here may shift into fifth gear on a breach. IF we fail then we have LT resistance to hold on to. See what I’m doing here? 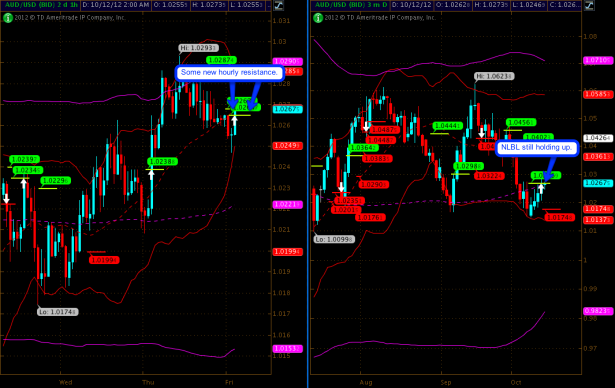 AUD/USD – at hourly resistance – the daily NLBL is holding up. Again look at the hourly panel for early clues as to whether we see a NLBL breach or if we continue down.

Quite a bit more for the subs – please step into my San Diego Ersatz Lair:
[amprotect=nonmember] More charts and non-biased commentary below for anyone donning a secret decoder ring. If you are interested in becoming a Gold member then don’t waste time and sign up here. And if you are a Zero or Geronimo subscriber it includes access to all Gold posts, so you actually get double the bang for your buck.
[/amprotect] [amprotect=1,13,9,12,5] 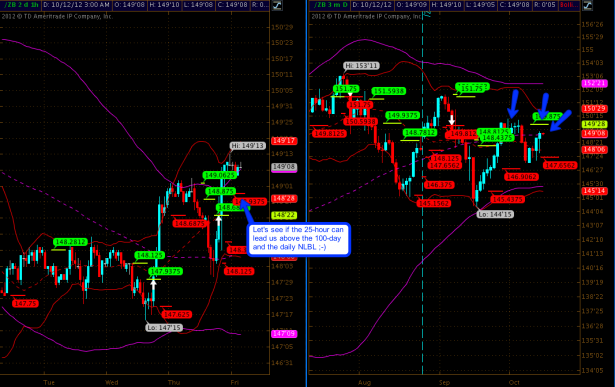 Bonds – let’s see if the 25-hour can lead us above first the 100-day and the NLBL. Easy to trade as we are right at the daily SMA and a fail of the hourly SMA would probably lead us back lower. Bear in mind that this is only the beginning of the battle – this is important resistance that will decide where bonds are heading for the remainder of the year. 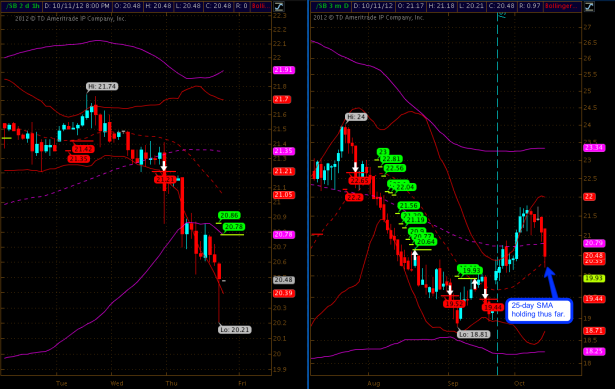 Sugar – 25-day holding thus far. I know this is a scary candle and a long here should only be attempted with very small exposure. Build it as it proves you right. Low probability trade with potentially high pay off. 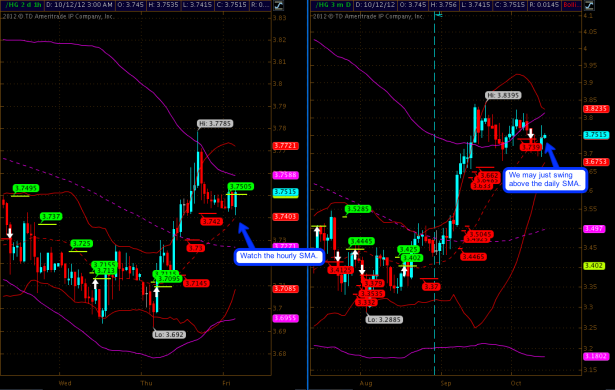 Copper – watch the hourly SMA – it may just swing us above the daily. 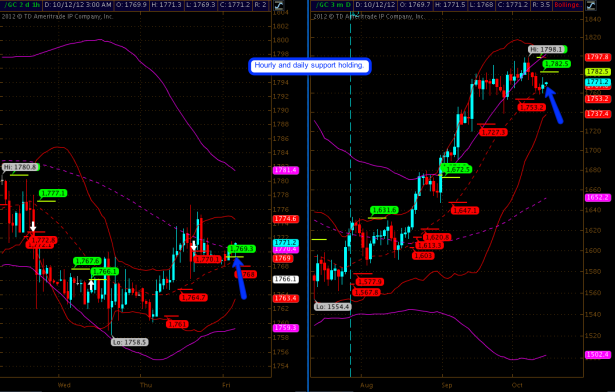 Gold – what can I say – hourly and daily support holding thus far. Let’s see if it leads us higher. 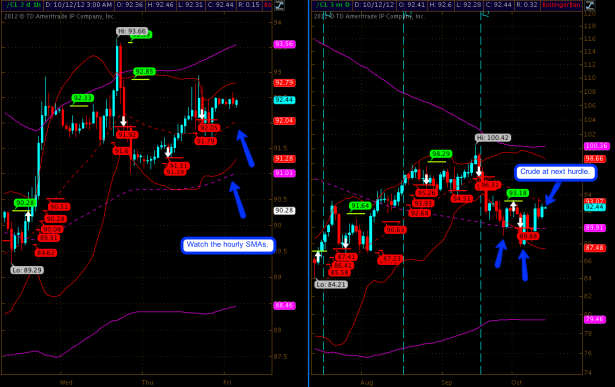 Crude – again, watch the hourly SMAs. The daily is at at its first hurdle. A breach here would lead us much higher. Great – as if gasoline prices weren’t already insane enough. 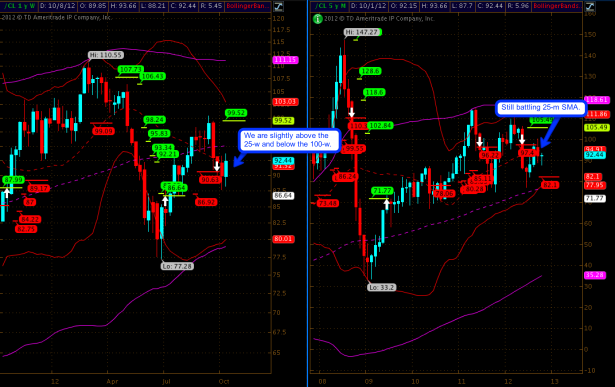 On the monthly we are still battling the 25-m SMA. Nothing happens until we breach that one. Or perhaps it’ll just climb it higher below, possible. The weekly is above the 25-w but still below the 100-w. So in essence quite a bit of resistance to be overcome ahead of triple digits. 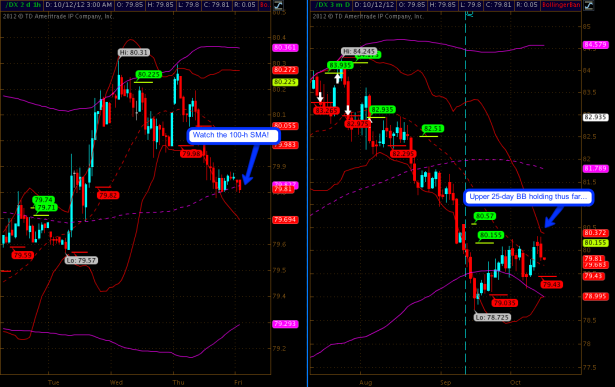 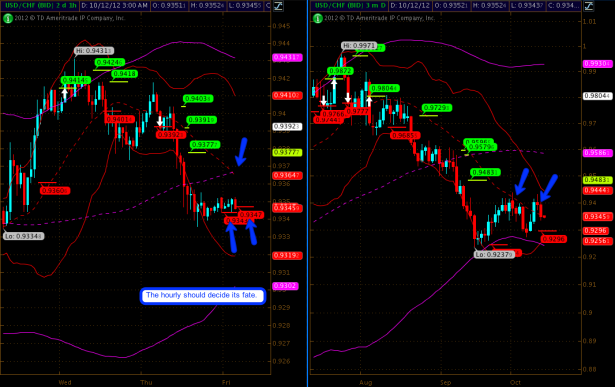 USD/CHF – the hourly will decide its fate – watch those NLSLs right now (i.e. Thursday night). On the daily I’m seeing attempts to overcome the 25-day SMA – thus far it’s still building a floor it seems. The line in the sand for ole’ bucky is the daily NLSL – if we go back below that we’re probably dropping quite a bit lower. 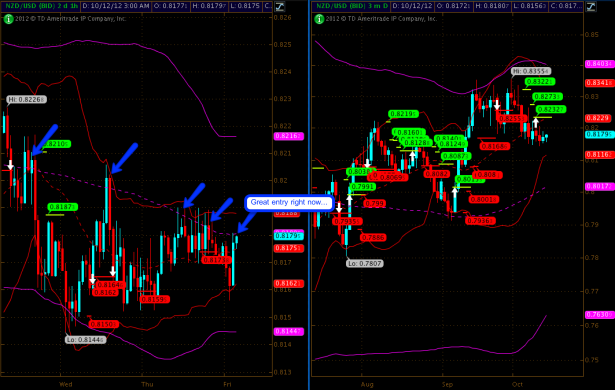 NZD/USD – nice formation on the hourly panel, wouldn’t you say? Well, since I took this snapshot we jumped higher so I would be long here with a stop below (if you can still catch it – sorry – perhaps we’ll get a SMA retest overnight). 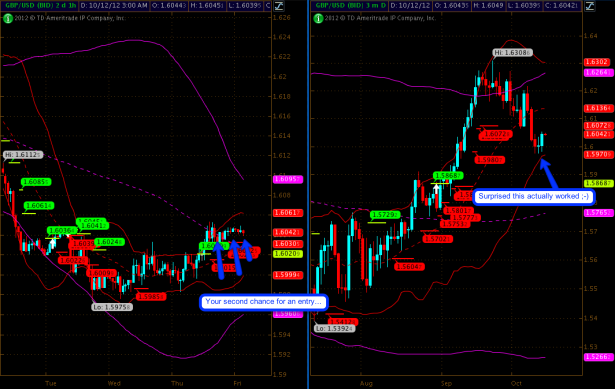 Cable – if you missed the BB touch then here’s your second chance for a long entry. 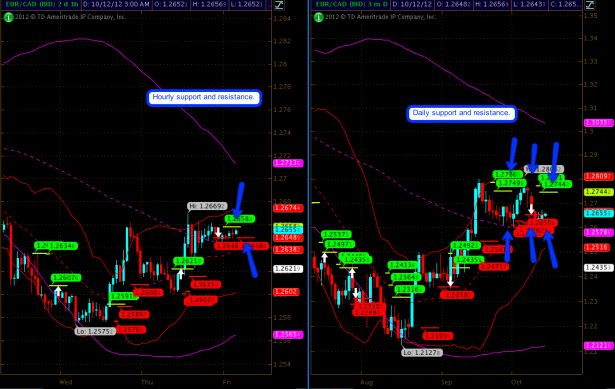 EUR/CAD – above both hourly and daily support – so far so good. There is a bit of daily resistance looming and if we continue higher this will be the first real test. But at this point I’m pretty comfortable with a long here, especially if the hourly SMA holds. 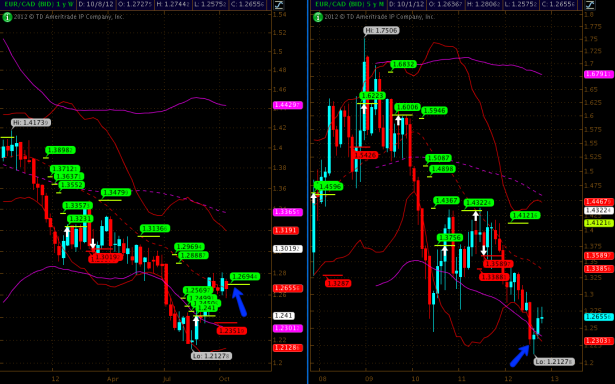 Here’s the long term picture – as you can see we are testing a new weekly NLBL – an important test.