The futures are dipping deep tonight and many of you are probably wondering how much pain remains on the horizon. As this is a third wave down making any intelligent projections is highly speculative but I’m going to try to offer a few possible targets on the spoos as well as on the SPX. My apologies for not posting this earlier but believe it or not my data provider decided to schedule some server maintenance while the futures were in free fall – incredible. 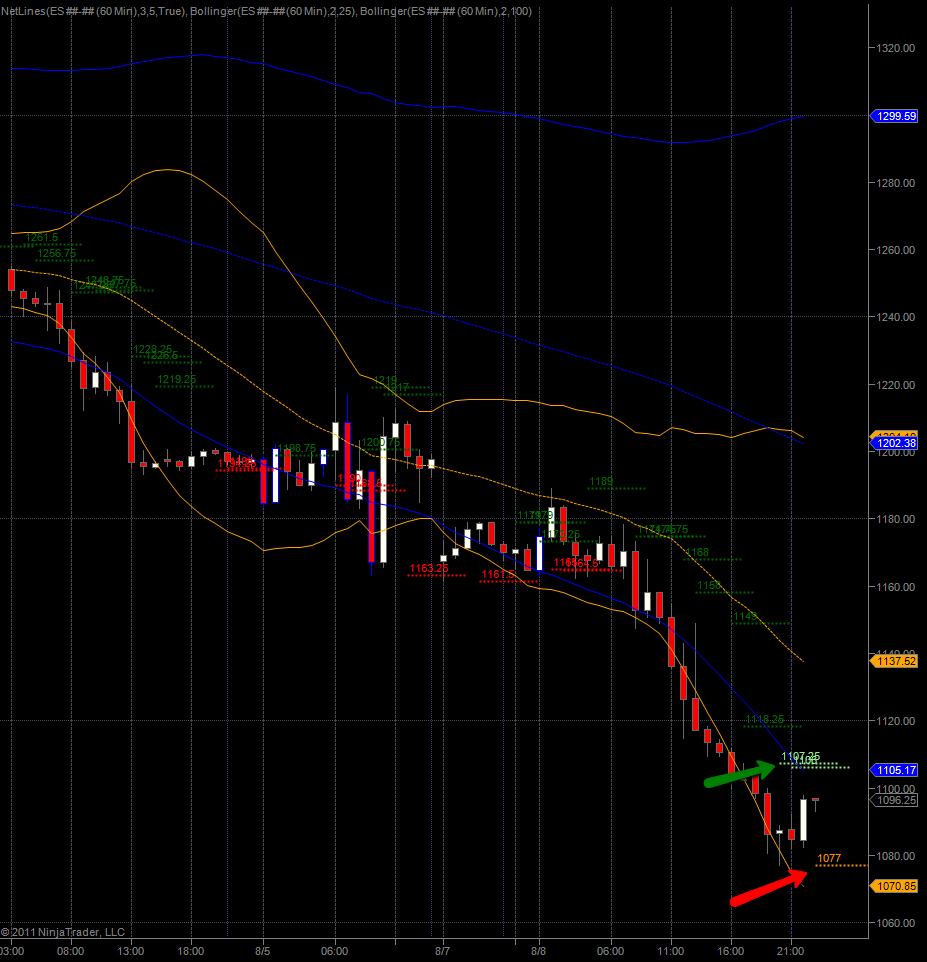 Let’s start with the S&P E-Mini futures first to give you some guidance during the overnight session. Since the close we have seen nothing but a sea of red candles. Currently there is an attempt to reach two overlapping net-lines at at the 1107 mark – which also is near the lower border of our 100-hour BB. So, 1107 is resistance #1.

As you can see on this chart the spoos have been unable to overcome the 25-hour SMA for days now and I would consider this resistance #2. If both of those can be overcome tonight or tomorrow then we may see a short term snap back – which given sufficient upside would be more of a sell the rip opportunity. More about this further below.

On the downside we have 1077 as the next Net-Lines sell level – if that one breaches we are most likely going to SPX 1000 tomorrow (around 1003 on the spoos) – I feel pretty certain about that.

But the short term really isn’t that interesting to me – since we are obviously have a confirmed trend change (from bull to bear) we are now much more concerned with sell-the-rip opportunities. And if we get a rip we obviously want to get familiar with some target areas – so let’s take a look at the weekly and monthly charts. I’m not posting the daily as it’s completely useless right now:
[amprotect=nonmember] Charts and commentary below for anyone donning a secret decoder ring. If you are interested in becoming a Gold member then don’t waste time and sign up here. And if you are a Zero subscriber it includes access to all Gold posts, so you actually get double the bang for your buck.
[/amprotect] [amprotect=1,13,9,12,5] 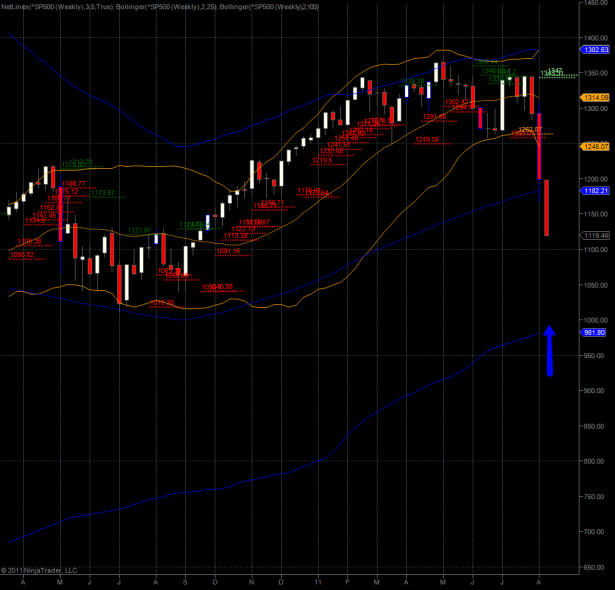 Let me precede this with a caveat: How exactly this thing is going to end is unclear. But if we bounce then we’ll have to first gauge momentum, breadth, velocity, etc. before we decide that it’s safe to take on any short positions. I’d like to see at least a 50 handle rip on the SPX – 100 would be better in that it would suggest a solid fourth wave up.

In any case – the weekly chart is a beauty to behold – as you can see we have not breached a net-lines sell level for a long long time, which was continuous expression of a (Fed fueled) bull market. Last week however we finally plunged through 1262 as well as the lower 25-week Bollinger band. My first notion was that we would get to 1200 and then bounce at the 100-week SMA – but we weren’t so lucky. The slice through 1180 today suggests that we will be pushing toward the 1000 mark. The only question here is whether it’ll be during this third wave or in the fifth wave down (interrupted by a fourth wave up – our potential sell-the-rip opportunity).

If we get a push higher I don’t want it to go much beyond 1200 – if we manage to push above 1250 then the bulls may grab the steering wheel again and it may drag things out and we may be heading back to 1300. However, frankly the odds of that are very very low right now – so don’t waste too much thought/energy on that scenario. If you are feeling the pain – trust me – it won’t stop until there is complete capitulation.

You want to wait for a bounce here – whether we continue all the way to 1000 in the express elevator or get that coveted push up to 1200. If its the former then I’ll have to re-project where we may be heading next and you’ll be the first to know. If it’s the latter then I’ll draw some of my fibs to refine a few more upside targets as soon as we get some upside – I can’t do anything without any context. Never ever try to catch a falling sword guys – this is a lesson many bulls learned the hard way in 2008. 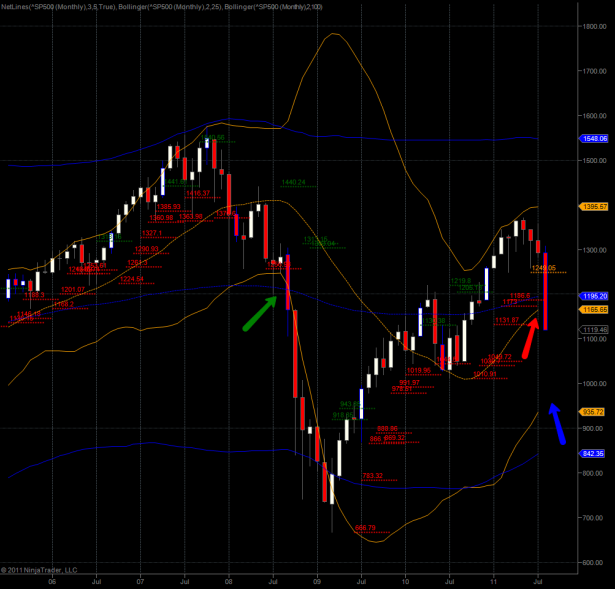 The monthly tells a very similar story. The green arrow shows you what happened the last time we breached both the 100-month SMA and the lower border of the 25-month BB – the resulting projected target of 800 was exceeded before we saw a small bounce. This time around we only breached both SMAs, which admittedly is bad enough. Whether or not this is the big one I don’t know but even if this is only the first intermediate wave down then we are still looking at between 850 – 950 on the monthly. Scary – but that’s what the chart is telling us right now.

The tape I want to see is a bounce now back near those two SMAs – indicated by the red arrow. As I said above a push toward 1200 would be golden and we would be able to set some stops slightly above that after taking on short positions with a target of around 1000 and below (see the blue arrow for our first target). 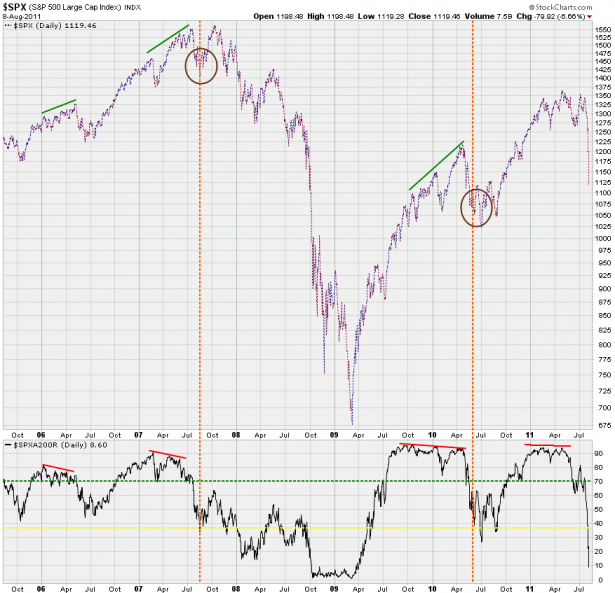 Before I hit the hay here’s one more chart I didn’t want you to miss. The SPXA200R vs. the SPX – which incidentally told us over a month ago that things were getting very dicey. Remember that? If you didn’t heed my warnings then you are obviously feeling the pain right now – I sincerely I hope you did the right thing and went mostly into cash.

Frankly I have not ever witnessed anything near a drop like this – ever. This is something on a completely different scale and it goes hand in hand with that D/A reading of 64:1 today (it somehow changed after hours – maybe it was adjusted). The velocity of this move was completely unprecedented – at least during my time in the markets. Now, we are still relatively early in this new trend and I think a snap back here is a possibility. However, bear in mind that if things get very ugly fast those readings in the teens can become embedded for a while, just like they did in 2008. So the next few days will be crucial and a push toward the 30 mark would indicate that the stage is set for the next leg down.

No, I don’t think we are done yet – both the weekly and monthly SPX chart are pretty much in line and I would be surprised to see them proven wrong.

I hope this is going to help you guys weather the current storm. No worries – I’ll be here to report on anything that offers us a reasonable edge. But I won’t engage in premature bottom calling – I’ll leave that to the pundits.

See you on the other side – stay frosty!