Now that both the market and the emotions have settled down a bit I wouldn’t be Mole if I didn’t present a synopsis of what exactly happened today. Of course I’m going to take this opportunity to offer my own personal take on things. There’s a lot of talk and hyperbole out there and I promise I’ll be quick.

What do we know:

The market crashed today –  period. You can argue about the how and who and when but the market literally fell off the plate today.

What we also know is that you will served an extra serving of rumors, explanations, and theories in the next few days, weeks, and months. How could this happen? Who is responsible? Someone needs to be punished! Oh, it’s our fault as the watch dogs have been asleep at the wheel? Never mind then… 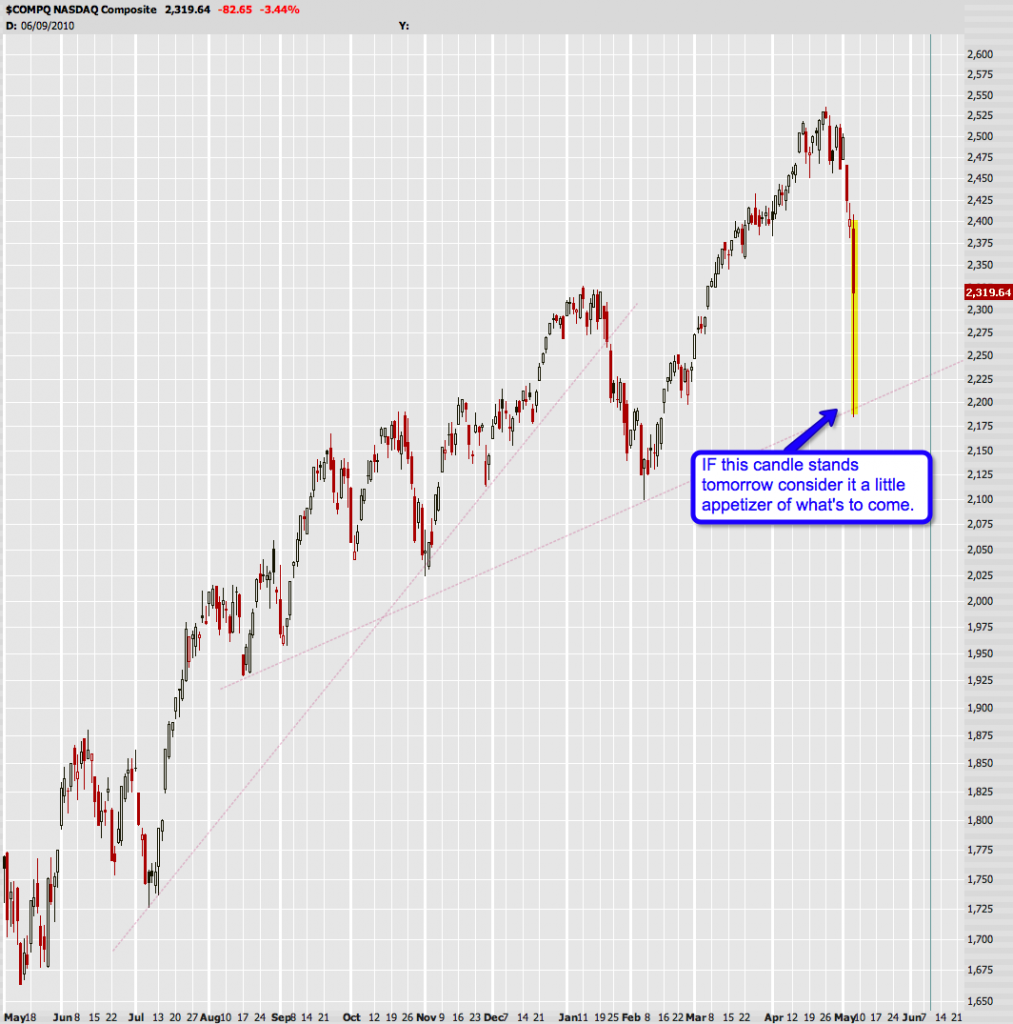 What we don’t know:

First up today’s signal has not been confirmed yet, so it’s possible they’ll find a legal way to ‘rewrite history’ and somehow make that candle go away. Pooffff – now you see it and now you don’t. I guess they wouldn’t be so eager to change history if it was a long candle to the upside – even if it was a mistake. Anyway, very much possible the chart above looks a lot different tomorrow and I don’t have a single doubt that they are discussing this very possibility behind closed doors right now.

Second, we don’t know what really caused this – yes, there are plenty of rumors and innuendo – as usual. Fade all of that and stay neutral – don’t even waste your time discussing it. Even if we get served a semi-plausible ‘nothing to see here, keep walking’ explanation on a platter tomorrow remember that we mortals will NEVER EVER know the real root cause behind this. What really goes on and what the public gets to ‘know’ are two completely different pair of shoes. Call me paranoid but I don’t believe anything they tell me on bubble TV or in the MSM. Just remember the Greek drama and how for weeks it was insisted that Greece did not need a bailout. Well, you all know how that worked out. They are now claiming that Portugal and Spain are completely insulated from Greece – meanwhile yields for pertinent credit default swaps are shooting through the roof. Lies, lies, and no videotapes.

What does it mean:

It doesn’t matter if there was an allegedly fat fingered tape – that argument is completely specious and reeks of desperation. Remember, the status quo needs to be maintained at all cost. The good/bad news – depending on your perspective: Even if this somehow gets explained and ‘history gets rewritten’ you cannot erase what happened today from the public’s mind.  Oh, they will try – believe me – they will try and probably succeed in fabricating some explanation and that it’s safe to buy buy buy. Because they always have your interest and your financial future in mind – sure, right…

Even if that candle disappears and all the trades during this mini crash get reversed the investing public has taken note – at least anyone with two synapses to rub together that is. Not to overestimate the average IQ out there but I sincerely doubt even Joe Sixpack feels compelled to throw his remaining assets into the Wall Street roulette table after today’s little episode. Face it – the technical damage has been done – no matter what they do, say, or cover up. It’s done – this will have implications – whether Wall Street likes it or not.

And that my dear stainless steel rats is all you need to know going forward. Fade any of the mental masturbation they will feed you in the coming days, weeks, and months. Focus on ‘reality’ – remember what happened today and the damage you incurred if you were delta positive. Don’t worry about snap backs – they will happen – I almost guarantee it. I would actually be surprised if we didn’t see the futures mysteriously wipe out all the losses overnight and more. Remember September 19 2008 – if you don’t know what I’m talking about go and check out a chart. And keep in mind what happened less than a week later.

Now, I’m not saying that you shouldn’t be long the market – if you see technical setups that are solid there’s nothing wrong with taking long trades. I personally have posted many of them. But you might at least be delta neutral, so that little surprises like today don’t wipe you out. You have been warned.

In case you are wondering – yes, I am still holding my long term index puts. They were worth a fortune for a few minutes today and then snapped back to mild profits. Frankly, I expected that and all I take this as is a little appetizer of what’s to come. P3 may or may not have started – but it’s coming boys and girls – it’s coming.

What you should be focusing on:

Reality – quite simple. The market is experiencing an increasing amount of volatility in the past few weeks, and this is just the beginning. Also, ask yourself – isn’t it strange that such a little ‘market mishap’ should occur right after Investor Intelligence registered a 20 year record reading in weekly buying climaxes? What is that? Hochberg explained it well in Monday’s Short Term Update (STU):

Two weeks ago we published the above chart from Investors Intelligence showing the number of weekly buying and selling climaxes, one of the many valuable indicators they tally. The week ending April 16 saw 467 weekly buying climaxes, which, as we noted then, ranked in II’s top 10 highest readings in their 20+ year data base. It turns out that this extreme was just an appetizer, because last week II reports that there were 1,079 buying climaxes, by far an all-time record. This was the exact opposite reading to that which occurred in March 2009, at the Primary wave 1 (circle) low, when there were 1,010 selling climaxes. A buying climax occurs when a stock makes a new 52-week high and then closes the week lower. A selling climax is the opposite. Climax extremes are thought to represent distribution, from either strong hands to weak (buying climaxes), or weak hands to strong (selling climaxes). A high number of climaxes tend to congregate around market turning points. Whenever any indicator moves to a 20+ year record, one should take notice. This chart strongly suggests that the stock market’s upside potential is limited, even if the major indexes manage to eke out a push above their respective highs of last Thursday-Friday. In our opinion, last week’s upside extreme is a perfect bookend to the March 2009 downside extreme. We think the stock market is transitioning from “up” to “down.”

Here is the chart – I hope Investor Intelligence doesn’t mind I repost it here, otherwise I’ll take it down immediately:

Also remember the record ISEE Equities reading of 360 just two weeks ago. No, that sort of buying frenzy without any fundamental economic support couldn’t possibly have anything to do with today’s candle, could it? After all – what’s the worst that can happen if there are no bears left to take profits on the way down? Well, you saw it today – that’s what happens.

I have presented a boat load of charts here in the past few weeks which indicated that we are in a precarious position and I have repeatedly stated that this market is trading on a wing and a prayer. I have presented various momentum indicators which showed strange divergences I could not explain. Others pointed towards a correction that failed to materialize and that gave me pause. My recommendation continued to be to stay frosty and to trade small until we saw any indication of a trend change. That indication came today – no matter if they remove that candle tomorrow or not. This market is doomed.

However, it is my duty to also point out that jumping in with both feet tomorrow will most likely lead to a complete wipe out. Just look at the past year – whenever the bears thought they had the bulls at the cohones things mysteriously turned around and the bears wound up broke. That does not mean you have to miss out on what’s coming – eventually. Focus on the LONG TERM – on every spike up accumulate more long term puts. Use a drop in volatility to add to your positions – but fade all the noise and all the whipsaw that will undoubtedly ensue. Just ask yourself – will THIS market be higher or lower come December, or next March, or next June? I have an opinion – and maybe I’ll will be proven wrong. But today’s events strongly point towards the possibility that I may just be on to something.

Good news! The latest edition of Bob Prechter’s Elliott Wave Theorist is available here for free. So get it while it’s hot on the plate – I guess the timing couldn’t be any better 😉