I’ve spent a good portion of my Sunday spiffing up the Zero tutorial, which admittedly was long overdue. So, please forgive me if this forecast will be more or less of the bear bare bones variety. Let’s get right to our charts: 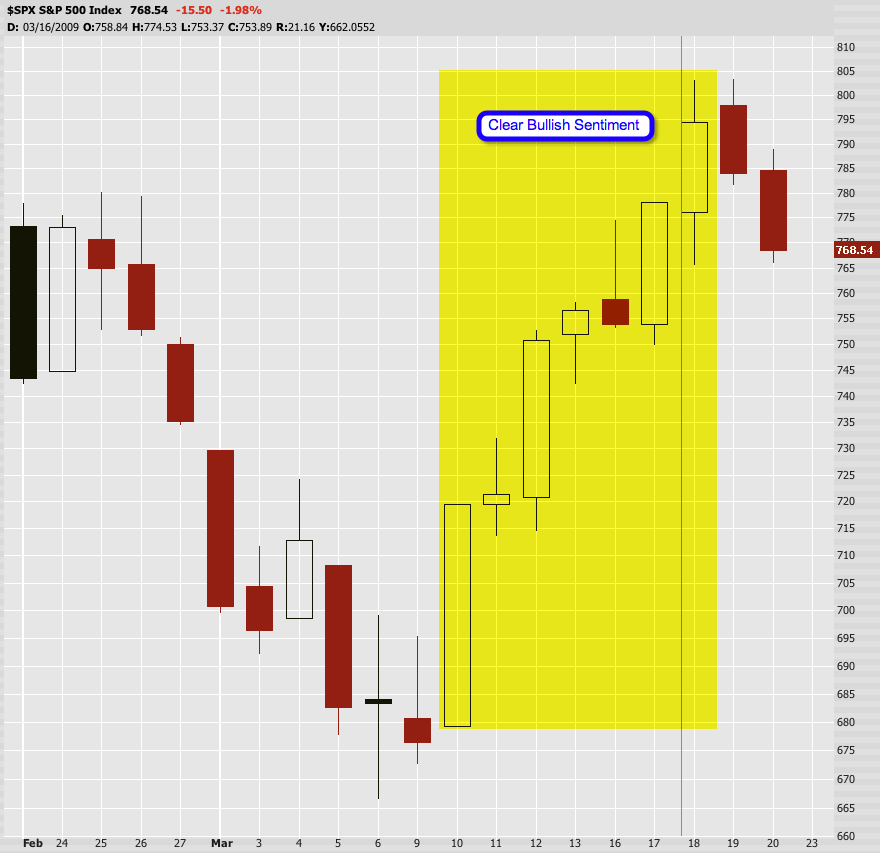 A lot of folks believe that 5 of (5) of {1} is still in play but I’m not buying it (or selling it for that matter). Maybe some of you guys are suffering from post dramatic bear disorder – you’ve gotten so used to playing the short side that going long feels almost unnatural. Well, I feel you rats but if we weigh the evidence, which I don’t have the time to list in painful detail then we have to consider the fact that: 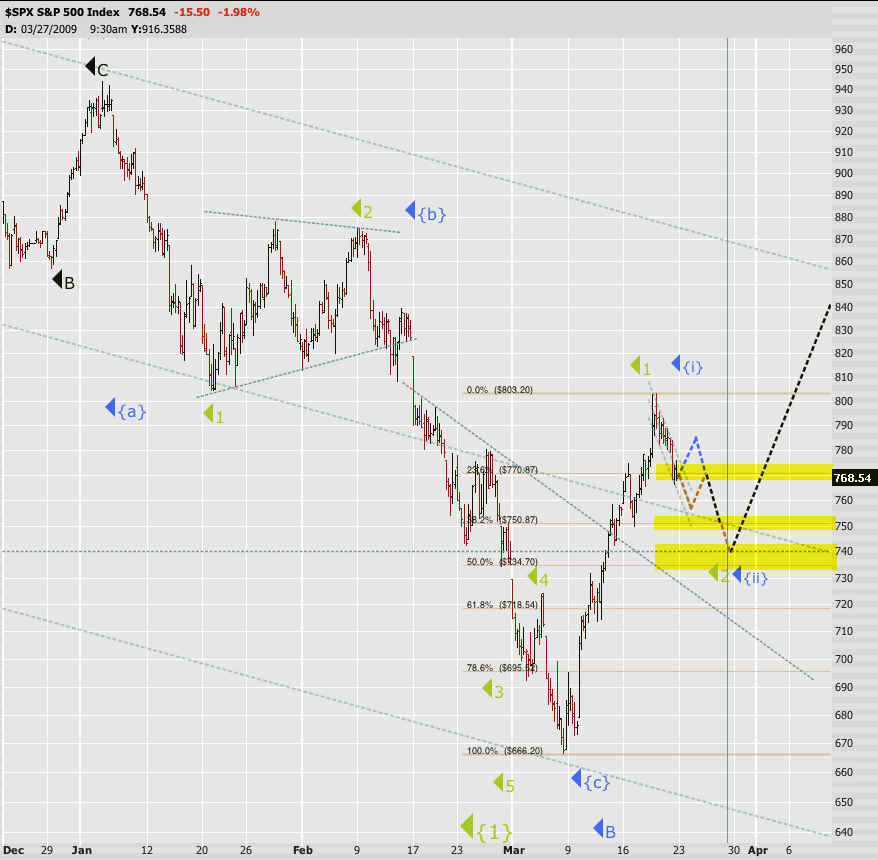 All this suggests to me that the probabilities currently favor the Primary wave {2} scenario. What would change my mind is a drop through 700 and below, in which case I might concede the probability that we may see a push below our March 9th low of 666.79. But until that happens let’s take a wait and see approach. For the record, that’s a number befitting Evil Speculator – LOL 🙂

So, as of tonight the assumption remains that we are in either:

Green: Minor 2 of Intermediate (A) of Primary {2} – a pro-regressive wave (see our bible psalm 56:3). This is my primary count as this point.

Blue: Minute {ii} of Minor C of Intermediate (4) of Primary {1} – a large flat. For now this remains my secondary count.

Both scenarios suggest that the medium term trend is a zigzag to the downside, followed by a continuation of the larger degree trend to the upside. Shown on the chart above are two short term paths – one in blue and one in orange. We painted a tiny double bottom on the 5-min chart on Friday afternoon, which was accompanied by a divergence suggested by the Zero Lite. So, there is a possibility – but not a necessity – that we push up on Monday and then follow through to the downside on Tuesday – as indicated by the blue lines. Or we might trace out the reverse scenario – as indicated by the orange lines. Either way I expect to see a zigzag to the downside as my current wave count suggests that the main trend is to the upside.

Target for the bottom of this zigzag is the 740 – 750 region, but it’s not impossible to see us touch the 61.8% fib line sometime next week. I would however not want to see us push much below that – as this would put additional (short term bearish) scenarios back on the table.

The spread between the 30-year T-Bond yield ($TYX) and the Moody’s BAA Corporate Bond yield was roughly around -4.75 Friday, so it has not increased by any measure but it also has not narrowed by much as the prior reading was -4.8. Let’s bear in mind that this is a more longer term supporting indicator, so a narrowing might not kick in until a bit later. I also attribute this to the confused state of the bond market right now – and it might be time to put this one to the sidelines for a while. 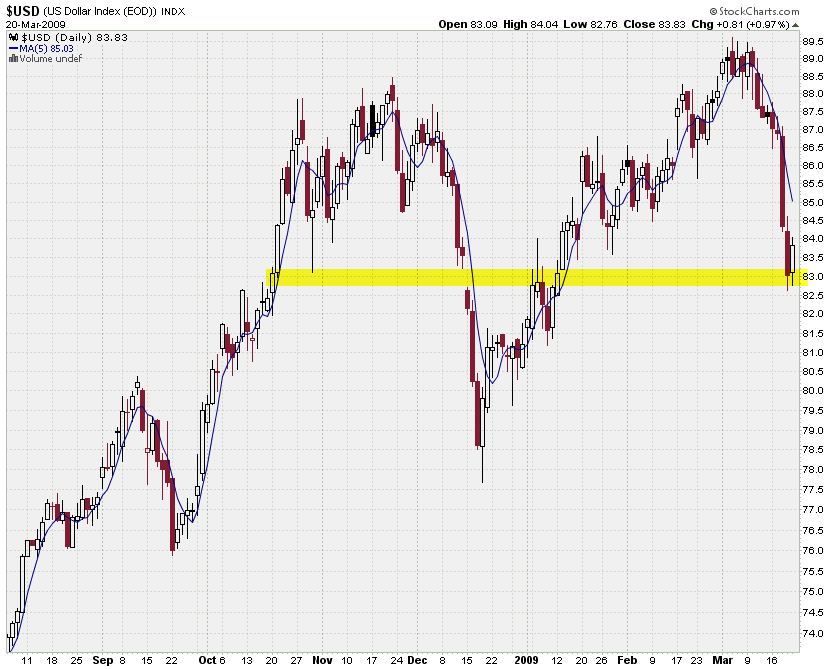 The Dollar has snapped back a bit from its Bernanke induced slip off the plate. At this point there’s stil a possibility we’ll see it continue its prior rally but we need to hang on to Thursday’s low. 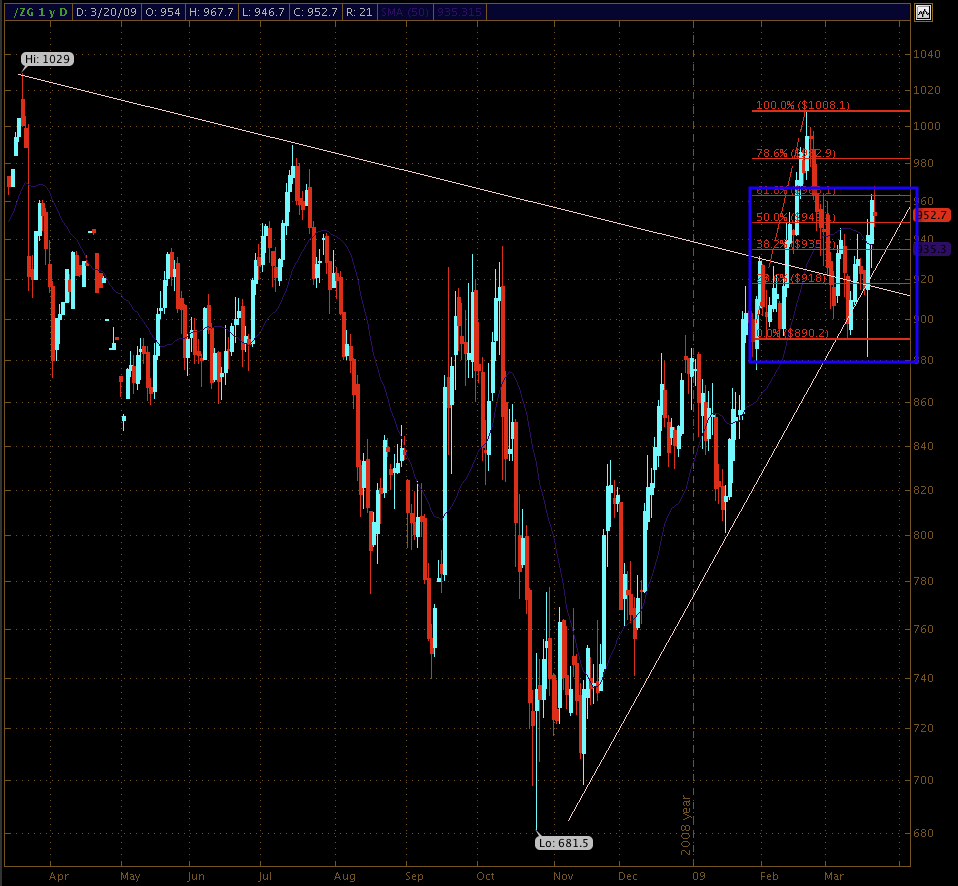 I’m glad I cut my GLD puts on Wednesday afternoon as we saw a strong retracement to the 61.8% fib line around the 960 level. Depending on where I find the ticker on Monday morning I might actually dip back into puts here. We should not push much past the Thursday high – if we do breach 980 it might question our current wave count and thus the short term bearish scenario.

Until we see evidence to the contrary the trend now is to the upside, which will be the focus of my trading activity for the coming weeks and months. I also plan on proposing some lucrative (and insanely devious) option spread strategies as the name of the game is to not get hit by a drop in option vega which can strip away much of your profit potential. So even if we are correct in timing a market bottom, there may be little to no gain from a big reversal move following the sell-off we’ve seen in recent weeks. As volatility slowly diminishes the premium of call options are negatively affected despite price moving in the right direction. There are ways around it and we’ll touch on that in the coming days as we are nearing a bottom of Minor 2 of (A) of {2}.

Finally, I will soon be making a very exciting announcement regarding the directed trading service I been polling about. I don’t want to give away anything prematurely but I think you guys are going to love what I have in the works as it’s something many of you have been asking for. In the past few weeks I have been secretly working on this in the murky depths of my evil lair but am getting very close to being able to share some details and charts with you rats. I personally believe that this addresses the wishes and needs of a large part of this community and therefore I personally cannot wait to pull back the curtain and let you see what’s in store. Give me a few more days to put together a page that explains everything in excrutiating detail.

Rats – that’s all I have in me tonight – have been working since shortly after breakfast and it’s almost dinner time. I’ll be sure to chime in tomorrow as the tape unfolds.