While the perennial bailout drama continues to dominate the financial news (and the minds of panicked traders) we are near profit targets on two of our commodity trades: 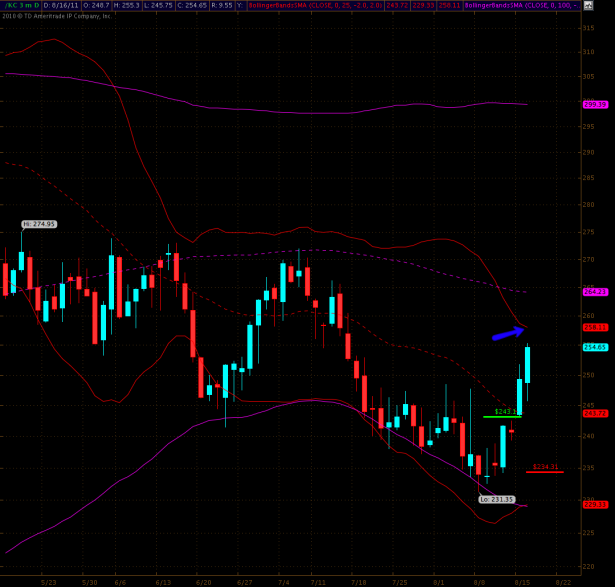 Coffee boiled up hot and continued toward our first target range. It’s probably fair to start closing out positions while perhaps keeping a few in the running for a touch of 258. I’m pretty nimble these days as there’s too much volatility in the game. 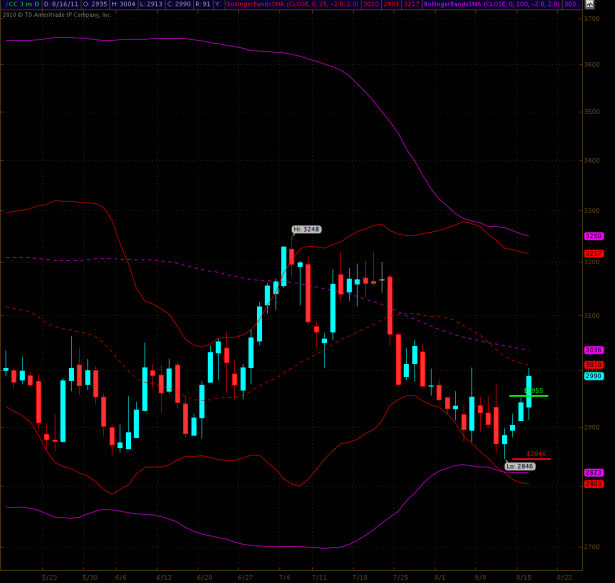 If you went long cocoa yesterday then you should probably take it off the table. I see only marginal odds as it’s running head on into two walls now (i.e. both the 25-d and 100-d SMA). Can it bust higher? Sure, but we take our trades and exit per our rules and hopium or greed almost guarantees a wipe out over the long term.

There’s one commodity chart I however find increasingly disturbing and it may have an early harbinger of what is going to happen over on the equity side:
[amprotect=nonmember] Charts and commentary below for anyone donning a secret decoder ring. If you are interested in becoming a Gold member then don’t waste time and sign up here. And if you are a Zero subscriber it includes access to all Gold posts, so you actually get double the bang for your buck.
[/amprotect] [amprotect=1,13,9,12,5] 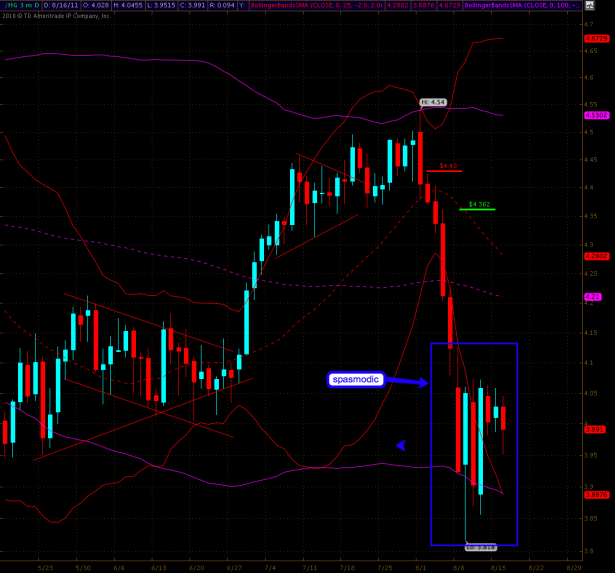 That copper chart is looking rather spasmodic and even for commodities a bit out of character. More importantly there has been no correlation with equities in the past week, which confirms my notion that the current equity rally has only limited legs. Today’s session looks short term corrective to me and that panic sell on the Sarkozy/Merkel news is a bit too blatant. I’m not convinced we have yet reached the top of this corrective move, but I can of course not completely discard that possibility, VIX buy signal and all be damned. So let’s take a look at our retracement treasure map: 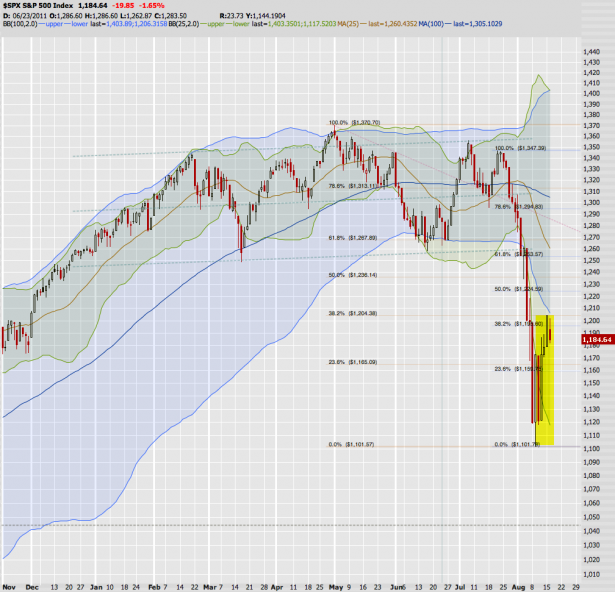 As you can see we almost exactly retraced 38.2% of the drop off the 1370 top. In reference to Scott’s comment in the prior post I also want to make it clear that Fibonacci retracemetns are being used in EWT but that they have existed way before Ralph N. Elliott incorporated them into his particular theories. So please bear that in mind when I refer to retracements – we are not counting waves here and when I occasionally use the word ‘wave’ then it’s inter-changeable with the word push (up or down). There are no wave counts on this chart and I am merely using overlapping fibs in order to project price target clusters. Nor will I use EWT rules to project tops or bottoms – hope that’s clear, and if you have followed this site in the past eighteen months than I’m sure you are already aware of this. 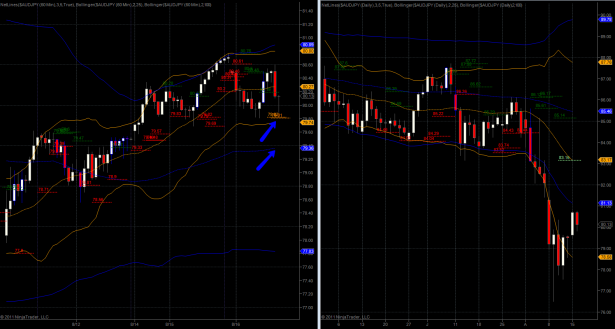 But you don’t necessarily have to wait for tomorrow’s NYSE open to jump on the bandwagon if we see some significant downside movement after hours. The hourly panel on the AUD/JPY has two support levels that may offer some guidance. One is the 79.80 mark which shows us two overlapping sell net-lines plus the lower border of the 25-hour BB, all of which were already rejected once. The other is the 100-day SMA which currently hovers around 79.40. A breach through all of those support levels would be extremely bearish and most likely pull equities toward the down side as well.

And there you have it – Mole is skeptical about the upside long term and skeptical about the downside short term. Obviously I am hoping for higher prices so that we can back up the truck. But guess what – so are a legion of other traders out there as the long term writing is clearly on the wall now. Which means we must not get married to our favorite scenario and then miss the bus altogether – after all, it moves the fastest when it’s empty. I do not have too much short term evidence at the current time but there is always a possibility that this rally may have met its maker. That possibility will turn reality if we start taking out important support lines. The AUD/JPY overnight will be the canary in the coal mine – a breach of today’s SPX low would be another to watch starting tomorrow.

And just so to spell it out (we do have a lot of new subscribers) – a breach of today’s highs tomorrow or the day after would most likely produce a push toward the 50% retracement mark on the SPX, or even higher. Yes, it’s our favorite scenario and that in itself is a dangerous psychological trap we need to avoid. As we have satisfied a respectable retracement of 38.2% we now need to watch the tape like eagles and carefully adjust our odds based on what price is telling us. We are currently at the first inflection point I presented last week and we need a breach of today’s highs very soon as to prove to us that the longs have the mojo to get this beast up toward 1220.