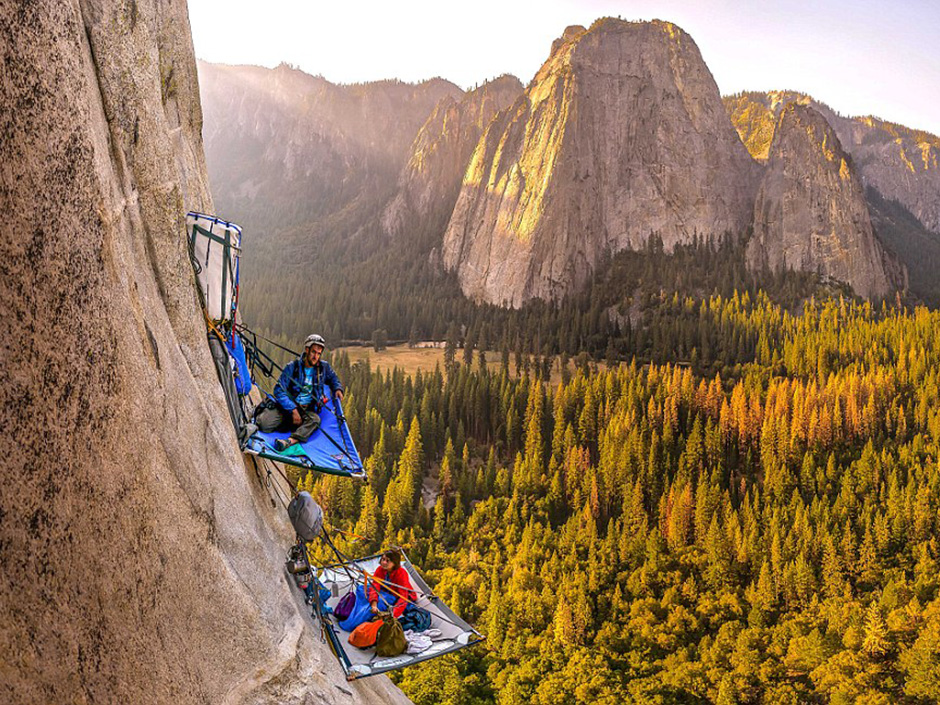 Equity futures have pumped higher overnight on economic data coming out of China once again bolstering confidence in the resilience of our global economy. Or that’s at least the explanation you are going to see being served up in the financial media, which never tires in providing a service that never has and never will offer any serious trader a competitive advantage.

Now I do understand that journalists would feel the need to report on economic reports or the latest happenings in global finance. But I have always found this chronic obsession to justify every wiggle in the tape a bit hilarious.

I guess it’s just human nature to try to seek simple explanations for various events all around us that may have more complex causality. But I personally never saw any value in it beyond its historical context, even as a fledgling trader. 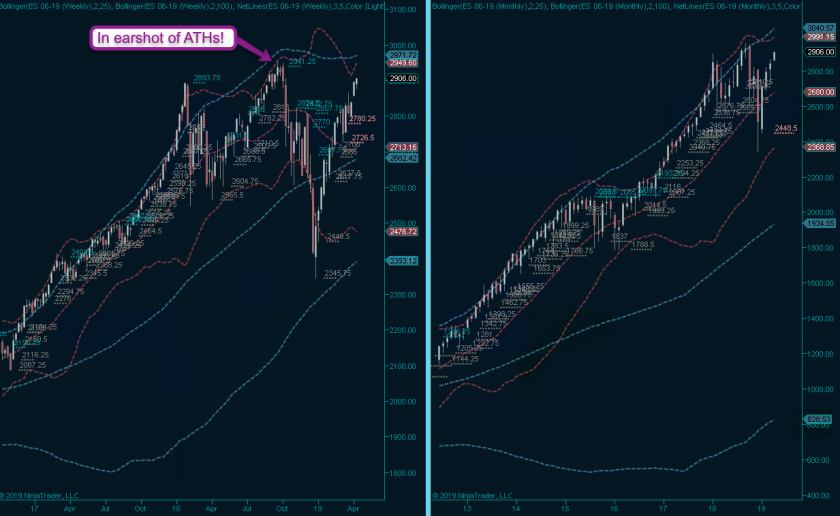 Be this as it may we’re most likely are looking at a ramp & camp type situation today as FOMO will most likely draw a bunch of Johnny-Come-Latelies into grabbing long positions after the open. At minimum the open will trigger a bunch of stops and thus I wouldn’t be surprised to see another pop higher in the first hour. 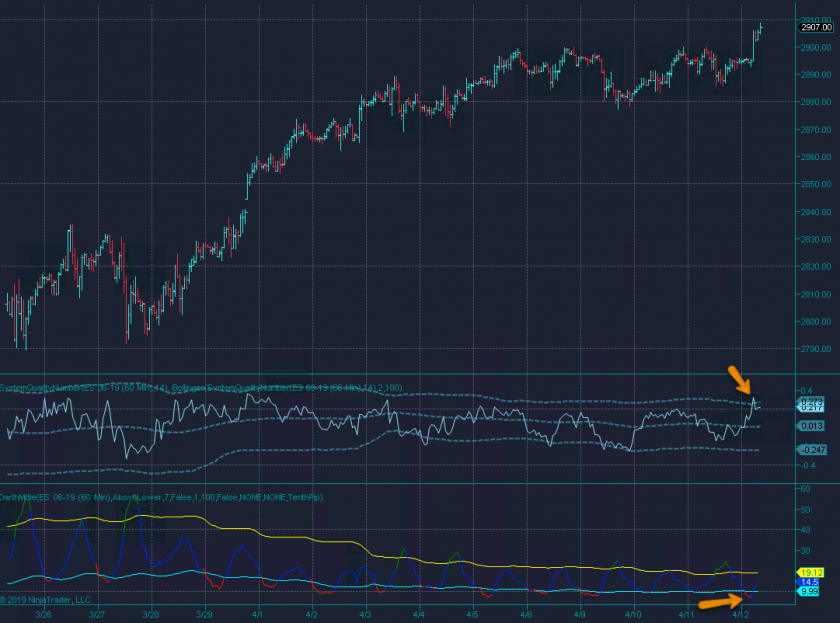 Although I am never one to underestimate a short squeeze, I should point out that the SQN signal has breached its upper BB for the first time in weeks. And after such a strong push it would not be unusual to see a bit of profit taking before this rally continues on its merry way.

I am a bit miffed about having been stopped out by a handful of ticks ahead of this push higher, but then again I did exit with 5.5R in profits and thus should listen to my own advice which would be to ‘shut the hell up and be happy with what you’ve got, Mole!‘ 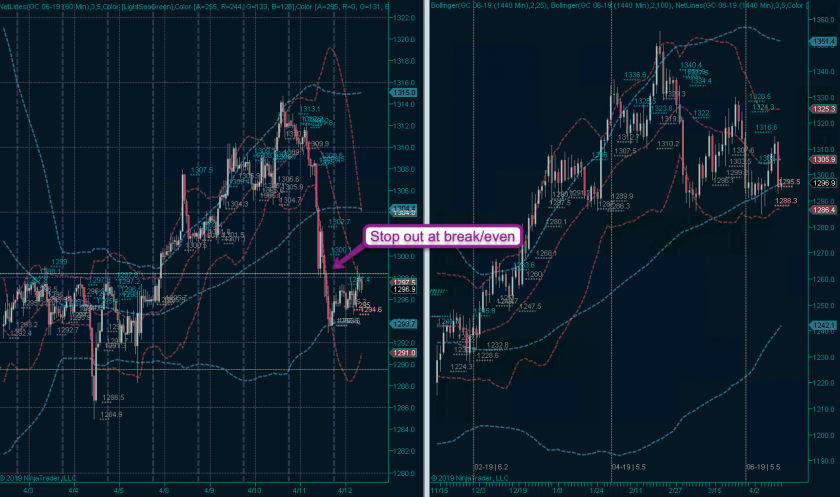 After a massive dump gold is a stop out – however fortunately it’s at break/even. Quite honestly although I have been pretty lucky with my recent gold campaigns (previous stop-out at ISL notwithstanding) I am beginning to consider putting precious metals onto a temporary ‘shitlist’.

Reason being is once again to listen to my own advice which is to be selective when picking your markets as all of them go through easy and crappy periods. Gold has been stuck in a rut for a very long time and it’s been far from an easy trade. Maybe time to put it away for a while and revisit once it finally picks a bloody direction. As you know I’m not known to be an avid swing trader.

Which of course brings up the thoughts of bitcoin and how it surprised everyone with a quick ramp higher after months of churn and inactivity. Yes – true that – but I refuse to let FOMO drive my trading decisions as you could point to dozens of sideways markets in expectation of a sudden break-out move.

And we all know where chronic contrarianism leads over the long term. Systematic account decimation – that’s where. Survivorship bias is a thing, and you rarely hear from all the bag holders who repeatedly made high risk bets and had their accounts cleaned out that way. 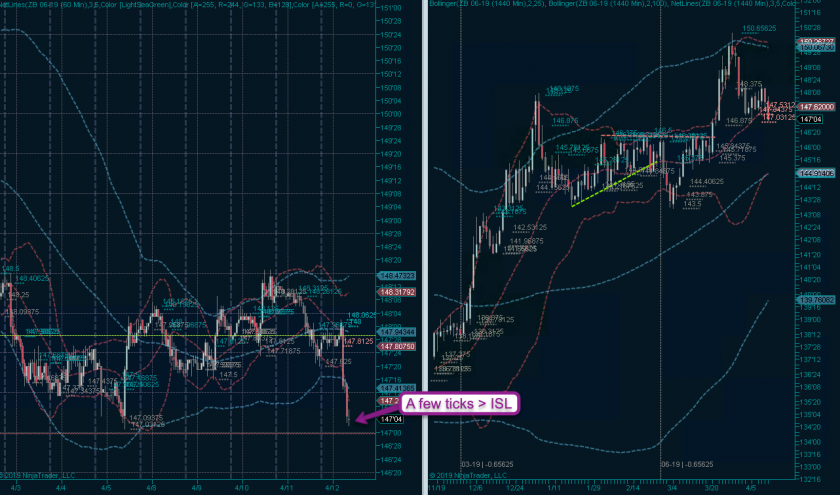 ZB is most likely going to be a stop out and it seems that bonds are going to revert back into shake out mode. It happens and quite frankly – this was an entry I would take every single time. Well planned and well executed – just doesn’t always pan out.

On that note some words to the wise: Reading this post you may get the impression that I’m in a down mood, so let me assure you that the exact opposite is true – I’m in rather excellent spirits today and have been in recent weeks.

Let me remind you that this blog was launched in 2008 as a means of expressing my ongoing thoughts regarding the financial markets as well as my trading activities, whatever that may entail. To that end it has served me personally as a historical gauge allowing me to keep things real and not to fall into believing my own bullshit. It’s easy to convince yourself of your own invincibility or infallibility during the easy days which is why it’s even more important to keep track of the times when things aren’t going your way.

Again I should not be one to complain as I think that Ms. Market has treated me quite favorably over the past 18 months, which by all accounts have been rather challenging. On that positive note let’s call it a week and pick things up on Monday morning 😉