My apologies for plastering over both Volar’s and Scott’s posts but I wanted to make sure everyone sees this before tomorrow morning. Fearless, one of our most intrepid stainless steel rats and also our newest blog contributor, made a comment late today which led me to dig a bit deeper:

… And retails are more bearish today than at 1120. The acceleration line test, examined on some blue chips, may be over. If we get weakness tomorrow morning it should be viewed as BTFD as long as we stay above 1205.”

Of course I could not let this one slip by without some of my own detective work, the results of which appear to back up Fearless’ bold claims: 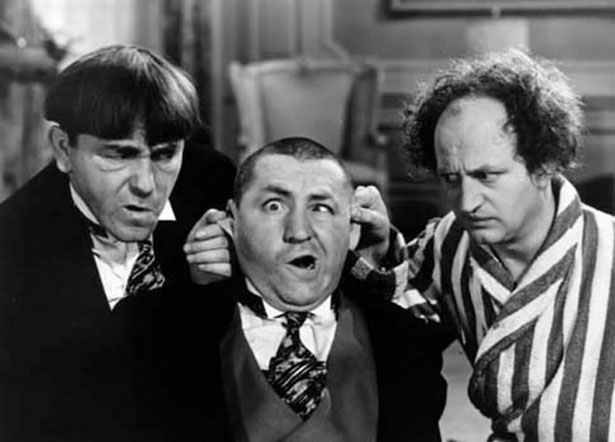 And thus it’s time for one of our regularly scheduled Retail Schmucks Update. Since we have a bunch of new subscribers it’s probably best if I first give everyone a brief run down on the ISEE. If you want some more background then here’s a pertinent article from Barron’s, otherwise here’s the nutshell description directly from the ISE:

The ISE Sentiment Index is a unique put/call value that only uses opening long customer transactions to calculate bullish/bearish market direction. Opening long transactions are thought to best represent market sentiment because investors often buy call and put options to express their actual market view of a particular stock. Market maker and firm trades, which are excluded, are not considered representative of true market sentiment due to their specialized nature. As such, the ISEE calculation method allows for a more accurate measure of true investor sentiment than traditional put/call ratios.

Well, I think it should more aptly be called the RSI – and I’m not referring to the relative strength index – rather the ‘retail schmucks index’. But that acronym was taken, so I guess they stuck with ISEE – cute enough. Now that we’re all on the same page let’s take a look at my updated chart:
[amprotect=nonmember]
Charts and commentary below for anyone donning a secret decoder ring. If you are interested in becoming a Gold member then don’t waste time and sign up here. And if you are a Zero or Geronimo subscriber it includes access to all Gold posts, so you actually get double the bang for your buck.
[/amprotect]
[amprotect=1,13,9,12,5] 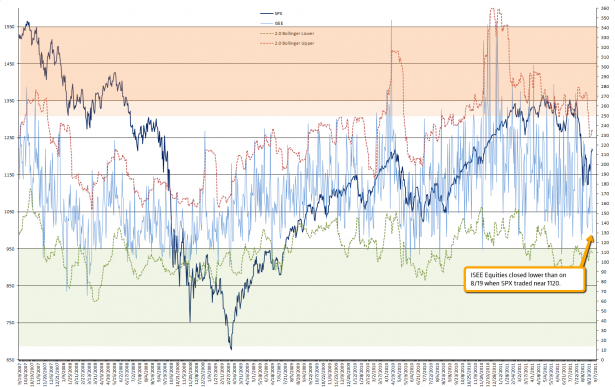 What really stands out to me is what Fearless already alluded to – today’s equities reading closed at 130, which is lower than what was registered near 1120 on August 19. That’s rather interesting and as this would be the first time in history that a majority of retail schmucks are on the right side of the trade I had to dig even a bit deeper: 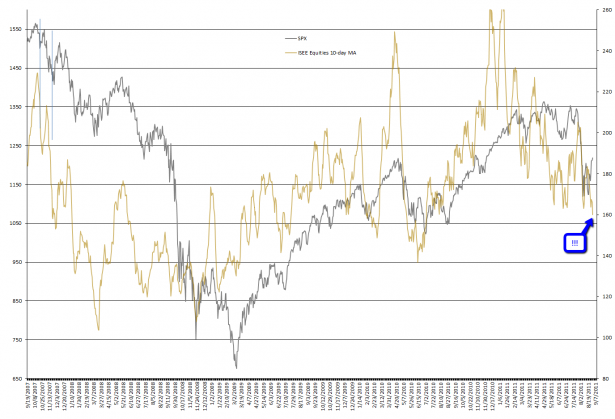 What Fearless and many other sentiment observers of his caliber may not be aware of is that the moving average on the Equities ISEE (and most likely other retail measures) is even more pessimistic. See above the 10-day SMA of the same data plotted on our first chart. As you can see we are currently at annual lows and the 160 mark has not been touched since summer of 2010.

So what does this all mean? Again, there are no guarantees as it’s an emotional market. But charts like this suggest that the current rally may have legs and perhaps even may push higher than initially anticipated. I would be extremely cautious about taking on any short positions here as pessimistic retail sentiment such as this is usually heavily exploited by market makers and institutional traders. Add to that Volar’s seasonal perspective and we are may have the ingredients for some theta burn or worse – a massive short squeeze.