I am sad to report that Soylent Red suffered a cardiac arrest late this morning. An SPX above 1103.52 was simply too much for it to bear and it quietly went to the great junk heap of Elliott wave counts. What’s next now you ask? Is there a chance for it to be revived and return as the living dead? I do have answers for you – but you may not like them. Be afraid – be very afraid!

Ready for some mad waves? 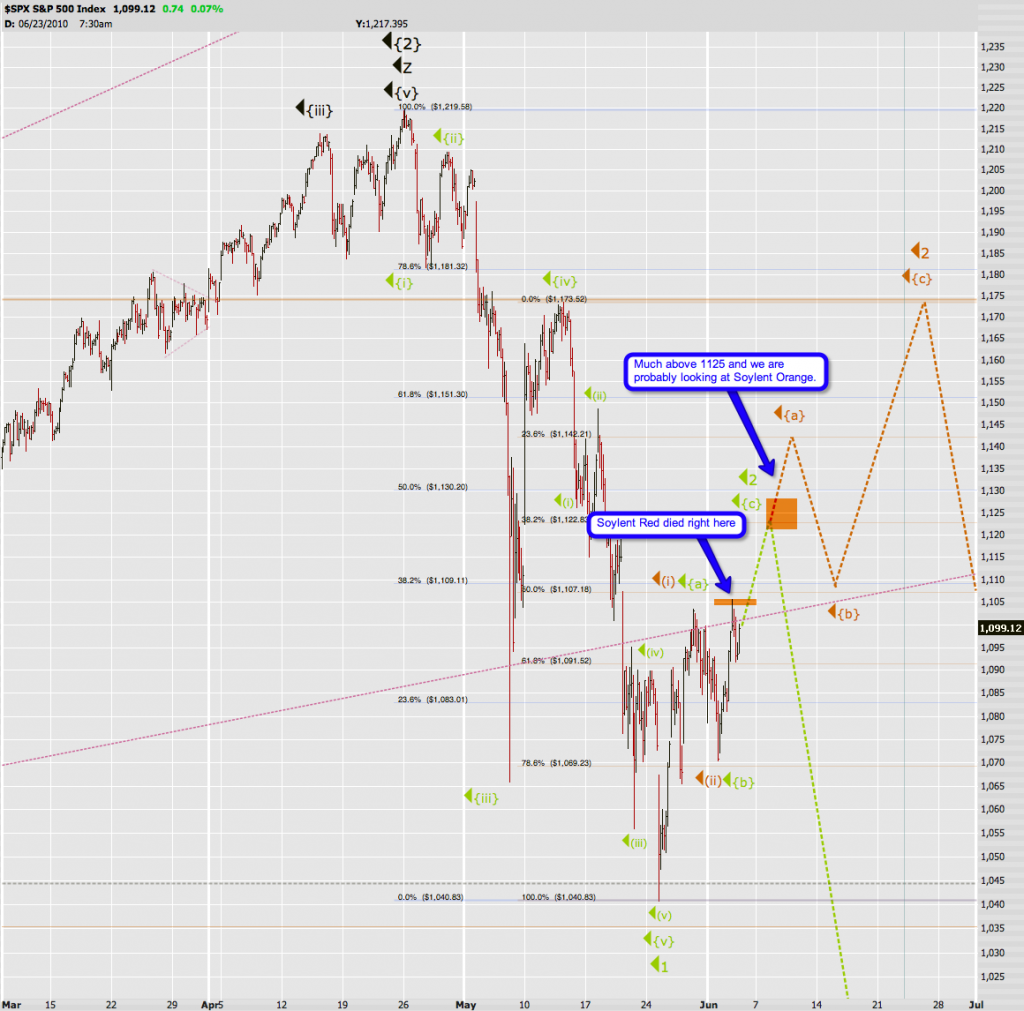 Although retracements (i.e. 2nd waves) are notoriously difficult to predict I am proposing two high probability scenarios – the old Soylent Green and one a bit nastier: Soylent Orange (for the lack of a greener green which hurts more bears). I think the wave count is pretty clear on this chart, but the separation point in my mind would be the 1125 cluster. If we push much above that it’s most likely Soylent Orange which would annoy the bears for the remainder of this month. Not without reeling in a few more during its drop into Minute {b} wave of course.

Again, the chances for a leading diagonal here are pretty slim – it’s just such a rare occasion to see them unfold, thus I prefer to count those in hindsight.  The end result would be fairly close to Soylent Green anyway, so it really doesn’t mattter.

The chances for an immediate bearish scenario are pretty slim right now, I’m sorry to say. The grizzlies had their chance and didn’t seize the moment when the had the chance (i.e. below 1103.52) – now they will most likely have to sit through yet another month of pain. As they old saying goes – you snooze, you lose 😉

Quote of the week:

We may be making a different but equally tragic mistake this time around: we are backstopping the wrong banks and letting Main Street whither on a drought of credit. We are in thrall to the theories of an academic elite that lack worldly experience, have spent their careers pampered by commissions, conferences and cushy positions, are captivated by their big bank sponsors, and have never left the incestuous little world of elite universities, Wall Street advisory positions, and government jobs. — Yelnick

I will be hunting for charts and symbols and report back.