I have to admit that I have not been very inspired in the past two or three months – often I really had to force out a count as the direction was pretty much up and then up and then even higher up. It gets old you know. After about three major zigzags toward the stratosphere many of us bears were ready to gulp down a bottle of Clorox and check ourselves into the insane asylum (hey, the food is actually pretty good).

In the past few days I have however regained some of the old mojo, so to say – a few people have left the bulding and moved on to do their own thing, and that’s okay. As they say – it’s lonely at the top – and I’ve always been pretty bad at pleasing people – especially when it comes to relative strangers. But these are exciting times nonetheless – in a way I almost feel like back in October of 2008 – I was equally unpopular then and had just gotten booted off of a very popular trading blog (no, not the Slope) for posting my now notorious ‘Dow Into The Abyss’ charts. Boy, did I piss a lot of people off – and they couldn’t wait to get rid of me, which then became the genesis of Evil Speculator. I’m sure many of them expected me to walk into the sunset and to never be heard of again, but I was happy to let them down on that end. It was interesting to see many of the same people finally find their way to this blog, roughly around the time the SPX was dropping through 700 – LOL 🙂

As a natural contrarian (yes, I used to be a pain in the butt before I became a trader) I do enjoy being unpopular. The more folks are ridiculing my work, question my skills, my trading background, or my analytical skills, the more emboldened I become and the more secure I feel about my trading and my own personal direction. After all – nobody ever got rich trading the markets doing what everyone else is doing. You want to bank some coin? You better not be afraid of pointing at a room full of people and telling them they are all wrong. That takes some serious cohones – alternatively it takes an over bloated ego and a natural desire to stick it to the next guy – I got both of that in ample quantities.

Whatever happens next will become a major chapter in the annals of history (no, has nothing to do with devious sexual activities – look it up). We can sit here and quibble about the perfect entries – and I enjoy the daily musings as much as the next guy. But I want to re-emphasize what’s really important here and that’s quite simply that you grab yourself a piece of the pie and that soon. It won’t be straight down from here, no – expect many head fakes, interventions, snap backs based on xxxx whch will be reversed a few days later, you know – the stuff we’ve become used to in the past year.

But you know what? You’re still here! You didn’t throw in the towel, you kept on fighting, made a few – lost a few, but you definitely learned a lot. And if you learned one single thing then it’s that they will try to throw you off the pony, and that more than once. But you know better and you know the script – and if you lose faith then I’ll be here to remind you. Because we are stainless steel rats and we will be victorious!

Okay, if you’re not inspired yet, I have to roll out the big artillery:

And no, contrary to all rumors, I’m not seven feet tall. But I’m 9 inches long, ladies 😉 Alright, enough of the pep talk – here’s the road map as I see it for the next week or so. 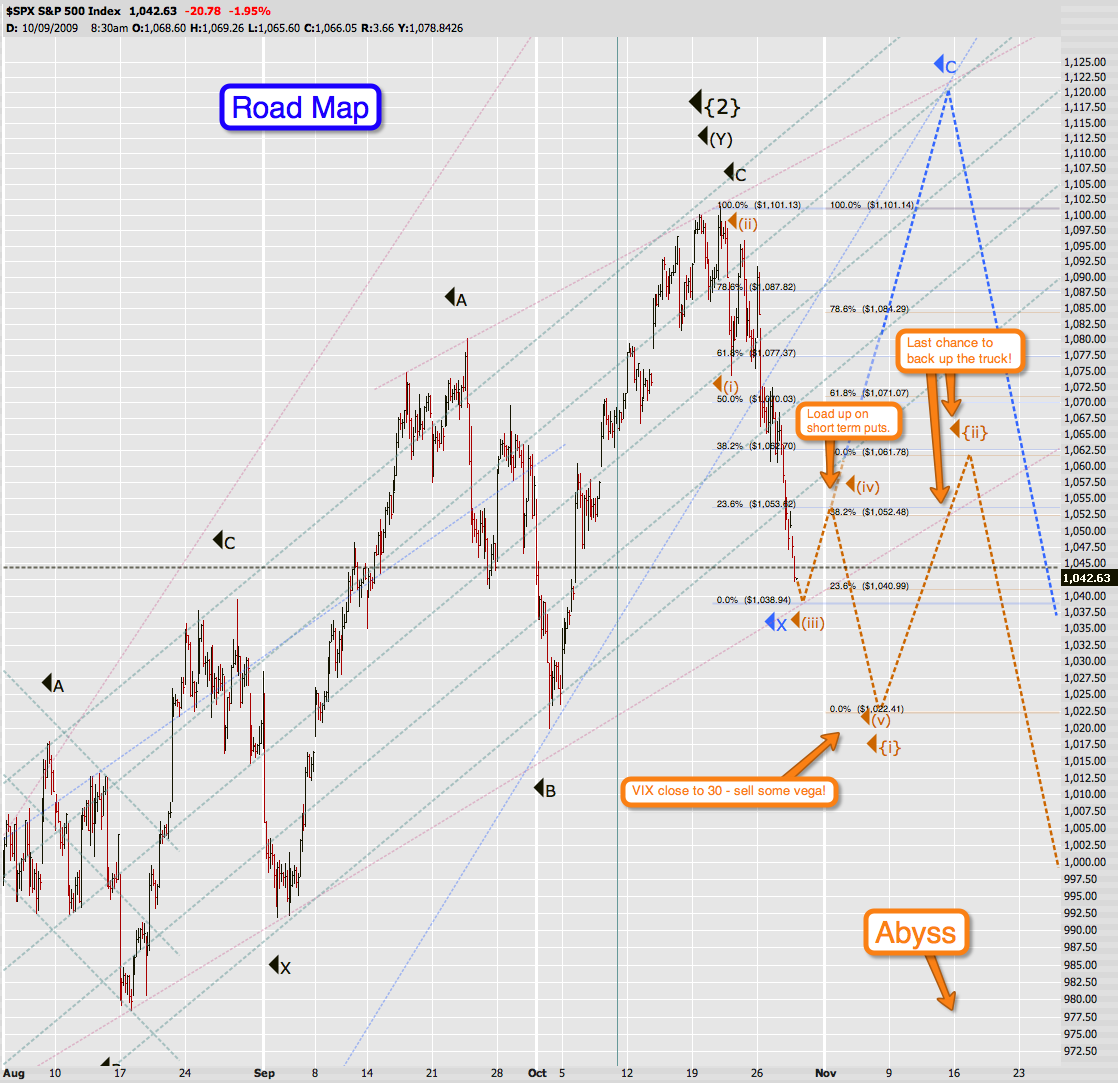 Yes, Soylent Blue is not out of the picture yet. We are getting close to where we can drop its probability below the 50% mark, but not just yet. However, the recent tape has encouraged me to permit myself some EWT inspired mental masturbations as to how things might play out in the next few days. Tomorrow’s announcement of third quarter U.S. GDP figures and the initial jobless claims might serve as a trigger for a quick push higher, thereby relieving the currently oversold conditions. This is not guaranteed to happen however – we might see a fast drop all the way to 1022 – these things tend to happen in deeply oversold markets.

So, yes – dropping my puts today was a bit of a risk, but there’s also Minute (2) waiting ahead, and it will be a final opportunity to back up the truck with long term puts. Perhaps this will get Mr. VIX back down towards the 25 mark, which should be the last time in at least a year we’ll see such low readings. Which also means that option traders will have a final chance to participate as we will approach and eventually exceed the type of volatility that was prevalent late 2008 and into early 2009. The one word to properly depict the options market around that time was ‘broken’ – and it will take a long time to come back at levels that will make derivatives again an ‘option’ for traders – pun intended.

So once again we are staring down at the abyss and it’s staring right back at us – are you afraid? You better be. But if you are smart and if you are prepared to sit through some nasty swings you might just walk away smiling when it’s all said and done. I’d love to be there with you – and going forward I’m going to completely fade blog politics and all the drama – my focus is going to be razor sharp. We had eight months to screw around, to complain, and to hatch our respective evil plans – now it’s time to play.